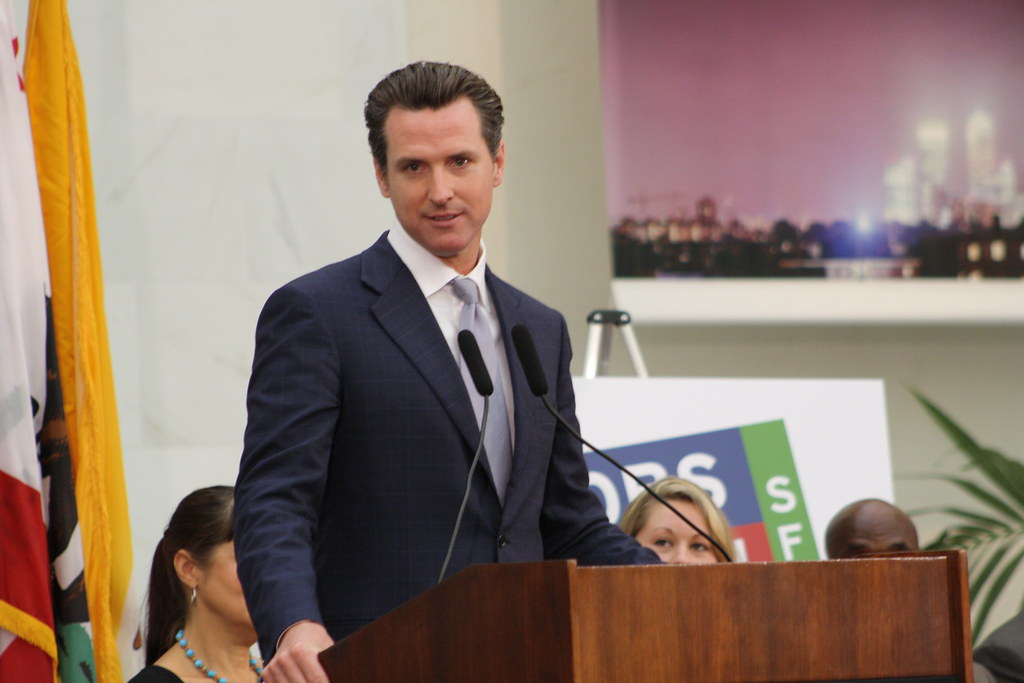 In March, California governor Gavin Newsom declared a moratorium on executions, effectively ending any chance of execution for the 737 California prisoners still on death row. While it is obvious that this move is important for the future of the death penalty in California, the significance of Newsom’s declaration lies in its potential ramifications for the death penalty across the country. California’s moratorium promises to be a template that other states can use to get rid of the death penalty, making the archaic practice a thing of the past in the United States.

California: Not a Unique Case

The status of the death penalty in the US is mired in inconsistencies thanks to federalism. The federal death penalty is rarely applied: since 1988, only three people have been executed on federal charges. By and large, the use and implementation of the practice has been left up to individual states. As a result, defendants facing similar criminal charges in different states are subject to different sentencing rules. Twenty states actually don’t use the death penalty at all. Among these, most allowed the death penalty at one point, but then later abolished it.

Of more relevance to Governor Newsom’s decision are the thirty states that still nominally allow the death penalty. However, although these states still have the death penalty “on the books”, there are several whose governors have issued moratoria on executions. In Oregon, Colorado, and Pennsylvania, executions have been halted by executive order. These instances provide the best parallel to the current situation in California. They provide ample reason to believe that Newsom’s moratorium will remain in place. For example, in Oregon, after Governor John Kitzhaber issued his executive order in 2011, the incoming governor, Kate Brown, actually chose to continue the moratorium. When an executive order such as this is able to outlast the rotation of office, it signals a high staying power – it would require a lot of concentrated backlash for Brown or a future governor to “undo” the order and resume executions. There is little reason to believe the scenario will be wildly different in California. Unless there is extreme targeted backlash, Newsom’s moratorium is likely to stand, perhaps even after he has left office.

The example of Washington also gives us reason to believe that legal abolition of the practice may be on the horizon for California. A moratorium on executions was declared by Washington state Governor Inslee in 2014. Four years later, the state’s death penalty statute was struck down as unconstitutional by the state’s Supreme Court. This is interesting for other states with moratoria, including California. If executive action can bring the issue to the attention of state courts, and if state courts are willing to rule against capital punishment, then it appears that executive orders like Newsom’s can lead to legal abolition of the death penalty.

Road to the Moratorium

In California, as in other states where executions are legal but have been halted by executive order, the death penalty has a history of back-and-forth. The state legislation creating the protocol for the procedure was passed in 1978. Since then, the law has faced several repeal challenges, but remains in place today. However, despite the legality of capital punishment and its frequent use in sentencing (over 900 people have been condemned in California since 1978), prisoners on death row rarely, if ever, see their executions carried out. In fact, more people have died on death row of natural causes or suicide than have actually been executed; in the four decades since the death penalty was instituted, only thirteen prisoners have been executed, while seventy-nine died of natural causes and twenty-six of suicide. In effect, the death penalty has become nothing more than a very expensive and litigious form of life without parole.

Statistics like these have placed California’s capital punishment system under scrutiny. For example, the ACLU of California described it as “a costly, flawed system that fails to deliver on its promise of justice.” Likewise, US Sen. Kamala Harris called the death penalty “ineffective, and a gross misuse of taxpayer dollars.” Such a statement from a presidential candidate like Harris is indicative of an increasing perception that opposing the death penalty is acceptable to voters. The critiques of capital punishment share a common refrain: although executions are still legal, most who are faced with the sentence effectively face life in prison, drawing into question arguments about its value as a deterrent or vehicle of justice. If it is never really carried out, then it cannot be used to deter potential offenders. In a similar vein, the death penalty won’t provide a sense of “retribution” for the loved ones of victims of those sentenced to death if the executions never occur.

It’s not surprising, then, that there have been multiple statewide referenda calling for the repeal of the death penalty. In 2012, Proposition 62 would have abolished the protocol but only received 48% of the vote. Four years later, in 2016, Proposition 66 would have done the same, but again only got 47% of the vote. In that same year, another referendum that would have reformed and “streamlined” the legal execution process was passed by voters. From these electoral successes, many supporters of capital punishment have concluded that the continuation of the practice has received an electoral mandate – in other words, that it’s the “will of the people.” As such, it would seem that by issuing the moratorium, Governor Newsom is “putting his own views above the will of the people,” in the words of State Assembly Member Tom Lackey. Similarly, Criminal Justice Legal Foundation legal director Kent Scheidegger described Newsom’s decision as “an abuse of power.” Most notably, President Trump expressed contempt for the moratorium in a tweet where he said he was “not thrilled” that Newsom was “defying voters.” These claims constitute a significant challenge to Newsom’s moratorium. However, as of yet, this opposition seems lackluster at best, suggesting that effective pushback against the decision is unlikely.

Governor Newsom has provided several lines of reasoning in response to criticism that he has gone against the will of Californians. In general, the moratorium has been received positively: sixty-two percent of Californians support the maximum sentence for first degree murder being life without parole instead of the death penalty. This is hugely significant for other states that still practice capital punishment, since California has now delivered evidence that these arguments against the practice will be relatively accepted. In his speech announcing his decision, Newsom uses the intuitive moral argument, claiming that he can’t “put his name” to a death warrant because he can’t be responsible for taking a life. This moral reasoning is already common among death penalty abolitionists in more liberal states, and could be used quite effectively there. Newsom also explains the wastefulness of California’s protocol, highlighting the fact that nobody has actually been executed since 2006. For those who are not swayed by the ethical arguments against the death penalty, this “appeal-to-taxpayer” strategy provides powerful grounding for its repeal due to its inefficiency.

Perhaps most interestingly, Newsom cites the racial bias in death penalty sentencing, a criticism that may hold a lot of appeal for voters in states with high minority populations. The logic is pretty instinctive: it’s unjust to punish two people differently for the same crime, especially when the punishment for one of them could be death. Death row prisoners are disproportionately likely to be black, and the death penalty is more likely to be applied in murder cases where the victim is white. This, combined with the fact that many individuals on death row end up being pardoned or discovered to be innocent, is a clear indication that the legal status of the death penalty is an issue of racial injustice. In effect, discrimination in sentencing has the alarming possibility of leading to innocent deaths, which are more likely than not to be people of color. By offering this reason for his decision, Newsom has brought a new dimension to the discourse on the issue that has significant moral appeal, potentially helping the death penalty repeal movement gain traction in states whose citizens have remained unmoved by other arguments.

While the protocol for the death penalty still technically exists in California, the situation as it is now looks promising for opponents of capital punishment. California state legislators are working on a bill to end the death penalty by 2020, which, given the response to Newsom’s moratorium, seems ripe for passage. The important lesson for the rest of the country is that Newsom’s decision seems like it will hold, despite the arguments made against it. Other state governors and legislatures now have a wide variety of appeals that they can use to justify their actions against the death penalty. Essentially, if a moratorium can work in California, a state where multiple referenda have upheld the practice despite it not having been applied in over a decade, a moratorium can work in other states as well. Whether a state faces a mandate like this from voters or not, governors and legislators have an assortment of rhetorical tools to get the support they need for moves toward the repeal of capital punishment. In fact, as the Washington case shows, a moratorium may provide the impetus for an actual legal ban on the practice. It is unlikely that executions in California will be resumed. Time will tell if this will be because the moratorium simply remains unchallenged, because the California Supreme Court declares the death penalty unconstitutional, or because the legislature bans the practice entirely. Regardless, Newsom’s moratorium has undoubtedly changed the discourse on the issue both in California and across the country.

For the thirty states that still allow the death penalty in some form, California’s declaration offers many promising avenues towards its eventual abolishment. The array of socially acceptable arguments for death penalty abolition is growing, and Newsom’s decision has effectively legitimized them even more. Consequently, the issue of the death penalty is no longer as simple as “justice for the victims” vs. “the human dignity of the condemned.” By bringing the high cost and racial disparity in implementation of the death penalty to the fore, Governor Newsom has changed the national conversation on the subject. As the country begins to move toward the rest of the world in ending state-sponsored executions, this momentous decision will be seen as the instigating event for death penalty abolition across the country.