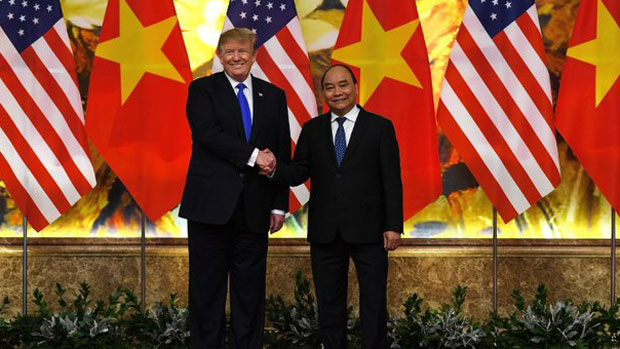 President Trump’s travels to Europe are unfailingly met with the angry protests of our democratic counterparts across the pond. From the thousands of protesters in the streets of Germany voicing their displeasure with Trump’s attendance at the G20 summit to the tantrum-throwing-baby balloon floating over Parliament during his trip to London, it seems as if a number of people abroad share domestic sentiments. But in a little country bordering the edge of the South China Sea, Trump has accrued an international fan base. Indeed, upon his arrival to Hanoi, Vietnam for the Trump-Kim summit, Trump was sincerely met with “Tremendous crowds, and so much love!” as he later tweeted. Trump’s strongman politics might be condemned in the West, but in the East, and Vietnam in particular, it resonates with the people’s desire for consolidated power, control, and stability. As a result, Vietnam is regressing towards its authoritarian habits.

Sure, Vietnam is nowhere near as democratic as countries like Britain or Germany, but U.S.-Vietnam relations have improved substantially since the Vietnam War due to the combined efforts of recent administrations. Bill Clinton’s end to Vietnam’s trade sanctions as well as Obama’s Trans-Pacific Partnership (TPP) hoped to temper authoritarian rule in the region through open trade with the West. A brief glance at Vietnam today might convince some that this economically prospering nation and up-and-coming geopolitical hotspot is poised to become a democratic force in South East Asia.

But President Trump’s positive reception in Hanoi betrays the Vietnamese people’s desire for a strongman, as long as the strongman is on their side. In response to the Trump-Kim summit, 100 Vietnamese intellectuals, social activists, and civil societies wrote a letter to “His Excellency Donald Trump” and echoed their calls for “independence, freedom, democracy and peace.” Trump’s gruff manner of speaking and relatively boisterous behavior seems to rub European nations the wrong way, but these matters are not of serious concern to the Vietnamese. In fact, Trump’s “I alone can fix it” mentality and MAGA cries are precisely what makes him an attractive candidate to champion Vietnamese interests.

A closer look at the letter to “His Excellency” reveals the motivation for why 100 Vietnamese intellectuals would put up a facade embracing democratic ideals. After centuries of conflict with China, sinophobia has become a visceral part of the Vietnamese identity. This fear has formed the foundation of U.S.-Vietnamese relations for decades; as Vietnam wants to protect its own sovereignty and the U.S. wants to keep Chinese expansion at bay. This fundamental relationship has not changed under the Trump administration. In fact, President Trump’s antagonistic tweets against China are what make him attractive to Vietnamese citizens. They feel as if this political newcomer, despite his strange mannerisms, will be a fine ally against their evil enemy Xi Jinping.

So what’s the problem? There is nothing inherently wrong with the U.S. and Vietnam’s mutual resistance against China. The hidden dilemma is how much the U.S. is willing to turn a blind eye towards in exchange for maintaining Vietnam as a strategic ally against Chinese expansion. In particular, the problem lies in how Trump is unwittingly prompting Vietnam’s regression into authoritarian rule, behaviors that his predecessors took great pains to dismantle.

The letter to “His Excellency” is only one piece of evidence for Vietnam’s desire for strongman rule. After all, brown-nosing is an art form practiced by communist nations and well-versed U.S. politicians alike.

More concerning is the rise of human rights violations in Vietnam coinciding with the Trump administration. The TPP was at the heart of Obama’s approach to Asia but faced numerous difficulties even at home. During the negotiation of the TPP, Vietnam was undergoing a period of increased activism; more and more people began to bring freedom of speech, workers rights, and democratic values to public attention. In return for implementing policies that upheld such ideals, the TPP granted Vietnam access to the vast U.S. market and simultaneously excluded China from the deal.

But when Trump pulled out of the TPP, Vietnam was released from its restrictions and began to persecute the activists it was once compelled to protect. The government began to systematically repress people’s right to assemble, freedom of religion, and freedom of speech. Most famous is the regime’s persecution of blogger Nguyen Ngoc Nhu Quynh, or more commonly known by her pen name, “Mother Mushroom.” In 2017, the Vietnamese government sentenced her to 10 years in prison for “conducting propaganda against the socialist state” after she wrote a scathing article about how a massive oil spill in 2016 had destroyed vast swaths of marine life.

Similar human rights abuses have continued under Vietnam’s new president Nguyen Phu Trong, who is touted as the most powerful man in modern Vietnamese politics. In addition to the office of presidency, Trong also holds the position of party head and thus occupies two of Vietnam’s “four pillars,” an accomplishment last held under Ho Chi Minh. This consolidation of power is not unlike that of President’s Xi, who orchestrated the removal of term limits, allowing him to hold power for life.  Trong has pursued an aggressive an “anti-corruption” campaign and rooted out high profile individuals in business, the military, and the Communist Party. But hidden beneath what he calls an innocuous “anti-corruption campaign” is the dangerous need to silence dissidents, a tell-tale sign of strongman rule.

Trump’s refusal to bring up the topic of human rights in Vietnam during the Trump-Kim summit was yet another example of how his administration is willing to compromise less-tangible democratic values for inflated security concerns. As U.S. House of Representatives members Zoe Lofgren, Chris Smith, and Alan Lowenthal — co-chairs of the Congressional Caucus on Vietnam — stated in a letter dated February 19, ““Being chosen to host a summit of this magnitude is an honor the Vietnamese government neither merits nor has earned, particularly given its deplorable human rights record, the detention of American citizens, and a new cybersecurity law that has already led to the censorship of social media posts from American and German citizens.”

If nothing else, Vietnam’s regression into authoritarian tendencies should serve as a reminder that the United States cannot be isolated from the rest of the world and be treated as an independent political entity. We are inextricably tied to the political happenings across the globe, and international policies, as well as presidential temperament, have profound consequences for how other nations conduct themselves.

Published in Uncategorized and United States