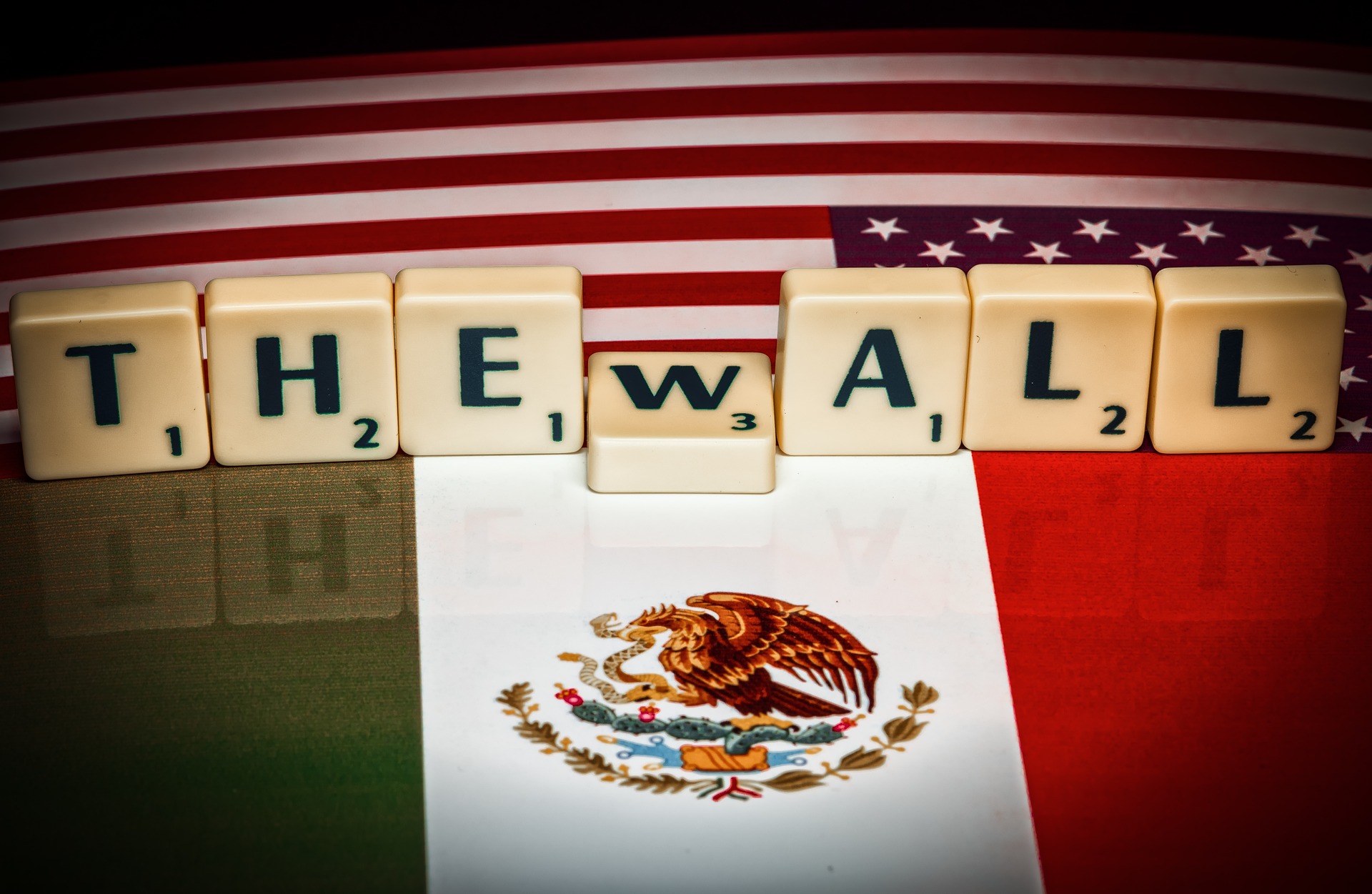 On February 15th, President Donald Trump declared a national emergency regarding the U.S.-Mexico border, subverting Congress in order to acquire billions in funding for a proposed border wall that was supposed to be paid for by Mexico. This was the culmination of  an ongoing dispute between the President’s agenda and Congress, with its previous iteration encompassing a historical 34 day government shutdown. Whether bypassing Congress is within the President’s powers is debatable, with the Senate’s bipartisan vote against the measure the latest iteration in the greater political debacle. Regardless, the key question remains: does Trump’s rhetoric match the situation on the border? Further, to what degree does the proposed wall meet the demands of 1,933 miles worth of security needs?  Ultimately, what needs to be done to combat what the President calls “an invasion of drugs and criminals”? To answer these questions, look no further than California.

California’s southern boundary makes up the westernmost portion of the international border, some 145 miles. The terrain varies, from rugged wilderness to rural flatlands, low deserts to bustling urban environments. California has five physical Ports of Entry on the border maintained by customs: San Ysidro, the Tijuana – San Diego connection; Otay Mesa, some miles east of San Ysidro; the Tecate & Calexico facilities within the Imperial Valley; and Andrade, on the eastern tip of the California-Arizona-Mexico Border. To gain legal admission to the country, overland migrants must pass inspection within these facilities; border authorities may search the person, vehicle, and any other property before offering admission. Those who do not pass an inspection, or lack critical documents such as visas or passports, will be turned away.

A cornerstone of Trump’s national emergency is the undocumented immigrant population, aka those who circumvent our legal admission system. Within California, the best estimates (circa 2014, the latest published data) suggest an undocumented population of 2.35-2.6 million people. This figure comprises more than 6% of the state’s population and puts California on the map for having the largest amount of any state in the country. Furthermore, finer estimates suggest that counties such as Los Angeles, Orange County, Santa Clara, San Diego, and Riverside are the most populated with undocumented immigrants. The substantial number of undocumented immigrants isn’t an emergency in itself, as the current administration would have you believe; rather it is the supposed crimes that come with them.

Time and time again, the Trump White House has painted South and Central American migrants through the frame of crisis. The criminality of unauthorized admittance is typically underscored by that of cherry-picked episodes of horrific crime; thus the public should fear not how they got here, but what they’re likely to do. Specific examples include the Kate Steinle murder, the Marilyn Pharis murder, the Robert Page murder, the Mejia-Alvarez murder, and many others. In all of these cases a citizen was brutally murdered by a illegal immigrant who, as the President would put, “shouldn’t even have been here.” However, the notion that these anecdotes are supposed to affirm, that illegal immigrants as a whole are prone to violent crime and that they represent a public safety threat, is simply not backed up by empirical data.

Quantitative research from multiple scholarly studies points against this narrative; in fact, the data shows that there may even be an inverse correlation between a high immigrant population and overall crime rate. Not only does research suggest that “undocumented immigrants may be less likely to engage in serious criminal offending behavior”, but that “cities with above-average immigration populations also experienced sharp decreases in all subtypes of homicide” (Ousey and Kubrin 2014). Further, a study conducted by the Public Policy Institute of California of cities with large populations of immigrants found “no significant relationship between immigrant inflows and property crimes”, and even “a negative relationship with violent crime rates.” This correlates with the findings of Martinez, Stowell, and Lee: following an analysis of the relationship between homicide and immigration in San Diego during “periods of major increases in the foreign-born population” from 1980-2000, the study conclusively found that in “communities [that] had an influx of immigrants”, the homicide rate went down.

If the impact of immigrants in a community does not result in higher crime rates, why declare a national emergency? The current administration would answer drugs. In a televised address during the height of the government shutdown, Trump decried the southern border as “a pipeline for vast quantities of illegal drugs, including meth, heroin, cocaine, and fentanyl.” The scary thing is that he’s right.

The Drug Enforcement Administration’s 2018 National Drug Threat Assessment found that not only is “drug poisoning the leading cause of injury [and] death in the United States”, but that drug-related ailments are presently “at their highest ever recorded level”. According to the DEA, since 2011, drug abuse has outnumbered deaths by firearms, motor vehicle crashes, suicide, and homicide. They cite the opioid threat as having “reached epidemic levels, with no sign of abating.” As Trump indicated, substances like fentanyl, heroin, cocaine, and methamphetamines pose significant threats to the American public. And the most common method employed by traffickers “involves transporting illicit drugs through U.S. ports of entry in passenger vehicles with concealed compartments or commingled with legitimate goods on tractor trailers.”

The San Ysidro Port of Entry is the single busiest land border crossing in the Western Hemisphere, averaging some 70,000 northbound vehicle passengers and 20,000 northbound pedestrians per day. It was the source of the highest volume of entrants across the entire U.S.-Mexico Border, letting in 1.8 million vehicle passengers and 650,000 thousand pedestrians in 2018 alone. Following a recent $741 million expansion, the facility includes 34 lanes of traffic and 62 individual vehicle inspection booths. It also includes 20 miles of steel and concrete wall, stretching along the border into the Pacific Ocean. With sheet metal, concrete columns, razor wire, double-layer fencing, stadium lighting, and video surveillance, the San Ysidro Port of Entry is one of the most secured facilities on the border itself. Regardless, San Diego remains the “number one destination for heroin, methamphetamine, cocaine, and fentanyl shipped from Mexico to the United States.”

The secret shortcoming of ports of entry like San Ysidro rests in the massive volume of passengers it processes: no matter how much is caught, by pure probability, the drugs continue to get through. For example: In the 2017 National Drug Threat Assessment, the DEA projected that Mexican Criminal syndicates in 2016 had produced some 81 metric tons of heroin. Across the border, however, only 1.7 tons were intercepted. That is by no means a small quantity to intercept, but the sheer volume of drugs trafficked constitutes an overwhelming and constant pressure on border security. Also in 2016, Border Patrol agents were able to confiscate nearly 91 tons of combined marijuana, cocaine, methamphetamine, and heroin, all of which were stopped when attempting to go through the 3 ports in the San Diego corridor.

Where does the wall stand among all of this? For San Diego, the physical barrier has little effect on the flow of drugs. As the aforementioned data shows, most drugs come through and are stopped within the facilities of the ports themselves: only through detailed inspection can the concealed substances be detected, and it’s predominantly through the volumetrically-induced failure of those systems that shipments enter into the United States. According to Border Patrol Drug Seizure Data, the vast majority of total drug confiscations originate from Field Operations Offices located at ports of entry. With the exception of marijuana (a drug that may or may not be controlled in the coming years), the data shows that the best way to target drugs is to invest in screening facilities, not physical emplacements.

There are other methods to circumvent a wall altogether: namely, tunneling. Since 2001, the San Diego Sector’s Tunnel Task Force has found more than 60 smuggling tunnels into the country. Along certain stretches of the county, the soil is the “ideal area for building tunnels”; with a clay-like composition strong enough to support the weight of a tunnel and soft enough to dig through, criminal syndicates can make their own channels. Large cartels can commit their resources to make tunnels incredibly elaborate, with some being hundreds of feet long and furnished with rail lines and even sometimes wired with solar power. They typically have inconspicuous entrances within industrial sectors, making their detection that much harder. How would a wall address this issue?

The data shows that not only is illegal immigration at remarkable lows, but those that do subvert legal migration are statistically unlikely to increase crime rates. Despite the security measures in  place, drugs are continuing to flow into California from the southwest border at alarming and increasing rates. That withstanding, in accordance to the data found at San Ysidro, a wall is not the solution to this issue. The majority of illicit substances pass through the ports of entry themselves, and if not, they can always circumvent the current physical emplacements through tunneling. Per the data, the Trump administration’s proposed solution of a physical barrier wouldn’t help the situation in California. This paints a dark picture for the walls’ potential impact on the ever-worsening “crisis on the border.”

Ethan is a Junior Staff Writer for the California Section, studying Rhetoric. Outside of journalism, he is an avid proponent of Stress Baking and a frequenter of the Berkeley Fire Trails.