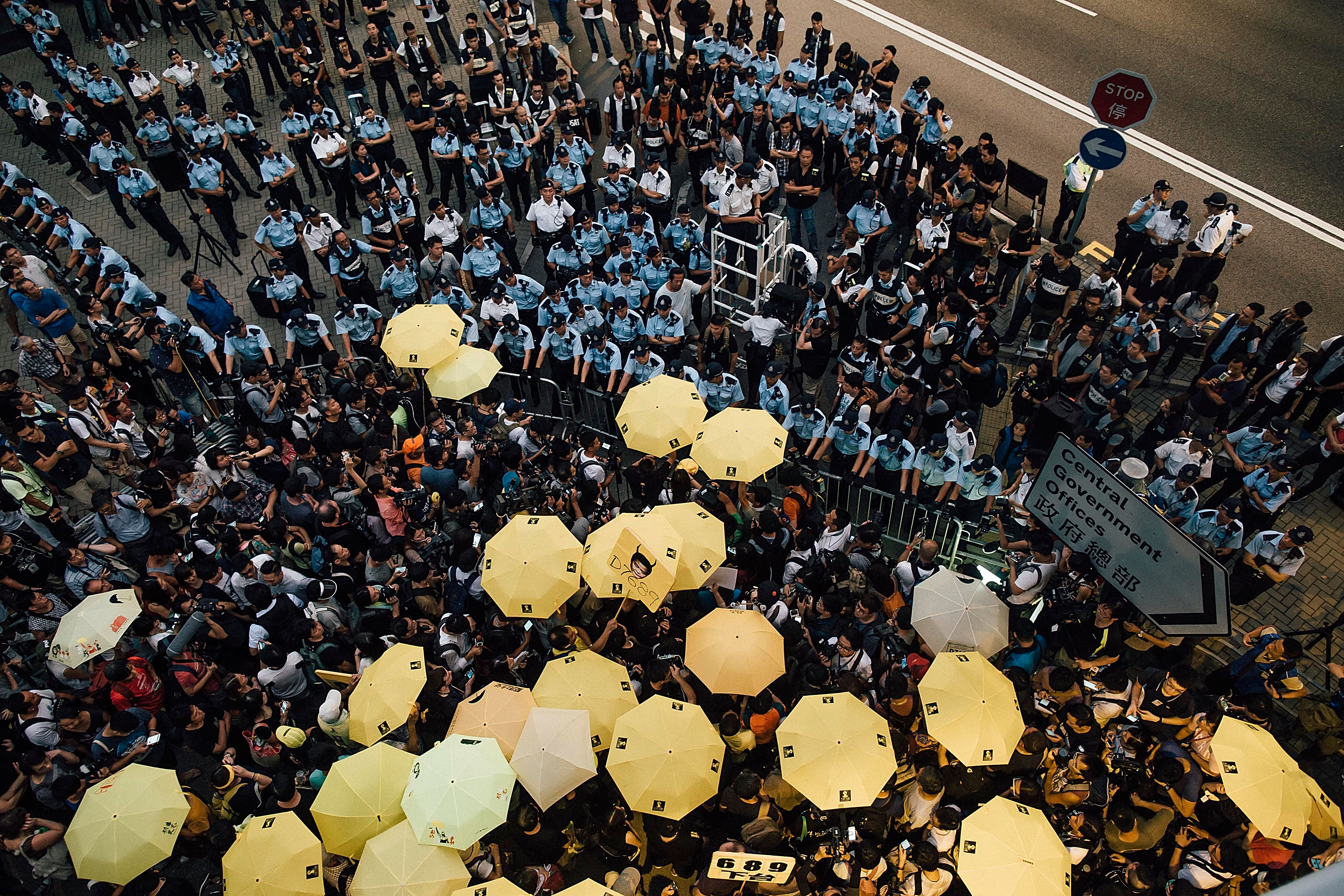 Hong Kong’s peculiar yet privileged position as China’s only liberal spot is coming to an end much faster than anyone has anticipated. Although the Heritage Foundation has ranked Hong Kong as the world’s freest economic market (out of 180 countries) for the twenty-fifth consecutive year in 2018, the foundation has also put emphasis on Hong Kong’s decline in judicial independence. The decline can be seen through the city’s reinterpretation of the Basic Law as a way to eliminate Democrats from the government in favor for pro-Beijing members, the high-profile disappearances of local booksellers, and the increased surveillance on local Hong Kong citizens. However, if China’s unscrupulous maneuvers in Hong Kong go unnoticed by foreign states, economic benefits the freest and most capitalist city the world has to offer will also come to a screeching halt. Foreign states, especially the US due to its enactment of the 1992 Hong Kong Policy Act, must, at the very least, recognize the city’s economic and financial value and fight for its autonomy, which will benefit both the US, Hong Kong, and even China.

The legislative processes of Hong Kong have been increasingly undermined since the 1997 Handover (the transfer of sovereignty of Hong Kong from the United Kingdom to the People’s Republic of China, as promised since the former’s colonial rule over the peninsula in the late 1800s) which sets Hong Kong backwards from its potential path to democracy. The 2016 legislative council elections serve as one of the most revealing examples of the weakened legislative environment. Hong Kong’s stunning turnout of 2.2 million voters, which is 58 percent of the electorate, in the 2016 legislative council elections led to the emergence of new faces in the pan-democratic parties against the pro-establishment, pro-Beijing camp. For example, the Democrat Nathan Law, at age twenty-three, became Hong Kong’s youngest-ever legislator in the city’s history. However, hopes for democratic change were painfully overturned when Law and many other pan-democrats were disqualified, permanently, from the chamber for their “inappropriate” oath-taking and swearing-in ceremonies, in which they shouted slogans in protest of the Chinese government. These “inappropriate” swearing-in ceremonies have become a traditional hallmark in Hong Kong political discourse since the 1997 handover. Nevertheless, Article 104, which designates that all members of all levels of government must, “swear to uphold the Basic Law of the Hong Kong Special Administrative Region of the People’s Republic of China and swear allegiance to the Hong Kong Special Administrative Region of the People’s Republic of China”, was quickly reinterpreted by a Beijing-led probe. Today, there are only 24 pro-Democrats left in the council against a solid pro-Beijing front of a whopping 43 seats. This solid majority will gag the voices of ordinary Hong Kong citizens and instead serve their despicable interests to transform Hong Kong from its unique repute to another Chinese city that will disappear under the oppressive veil of the PRC.

Human rights in Hong Kong have also found themselves going down a slippery slope. Between October and December 2015, five staff of the local Causeway Bay Books went missing and in early 2016 it was confirmed that all five were taken into Chinese custody. The cause behind their disappearances can be attributed to the “Guangdong Action Plan,” which authorized Chinese personnel to target authors, publishers, and booksellers in Hong Kong for “explicit content” in book material. Their extrajudicial detentions were, according to foreign British secretary Philip Hammond, “a serious breach of the Sino-British Joint Declaration on Hong Kong and undermines the principle of one country, two systems”. Lam Wing Kee, one of the five who has since been released, described his confession to be staged and scripted by Chinese authorities. Gui Minhai, who has a Swedish passport, was seized when he was on route to Beijing while being assisted by Swedish diplomats. The PRC not only disrespects the legal conventions of Hong Kong but it also openly ignores legal foreign intervention. The PRC’s arbitrary application of legal principles and detention of foreign persons have been made in the name of “national security” and these strategies are often used to force foreigners to cooperate with investigations or turn them into bait to lure fugitives to the country (such as holding a dissenter’s relative in custody in order to entice the dissenter to step foot on Chinese soil, effectively enabling the PRC to arrest him or her in exchange for the relative’s freedom (which is not always guaranteed)).

This disgusting lack of regard for international laws and human rights ought to be eradicated by the international body. Sadly, countries have done nothing more than utter a few nuance criticisms of the PRC’s longtime reputation as the big schoolyard bully and continue their plans to flatter the Chinese government in order to facilitate access to the large and lucrative Chinese market.

While extrajudicial detention of Hong Kong citizens by Chinese authorities seem to be a minority number of cases, growing Chinese surveillance has also discreetly bled into the everyday lives of Hong Kongers. According to an article in The Epoch Times, dual-plate Chinese-Hong Kong vehicles have been installed with recording devices under the guise of “inspection and quarantine cards” since July 2007, the espionage functions were then confirmed by a professor of electrical engineering and a private investigator. In 2015, up to 20,000 private vehicles and tens of thousands of buses and trucks have these devices installed. The signal receiving range of these devices is up to 20km, which indicates that vehicles within Hong Kong, not just vehicles near the border, are susceptible to the eavesdropping network. Schools, like the roads, are not immune to growing Chinese influence. Recently, the legislative council has proposed a bill that bans criticism of the Chinese national anthem and also required that the national anthem is taught in international, subsidized, and special schools. Teachers and educators are left baffled whether or not to report pupils if they mock the anthem.

These measures have been criticized for forcing patriotism upon both locals and non-locals as well as cultivating the spying and snitching culture in Hong Kong that the Mainland has all known too well since the rule of Mao Zedong.

Hong Kong’s possible transition into one of China’s many municipalities may lead to the compromise of the city’s legal system: The basic law will be re-interpreted in the PRC’s terms, regulations will be altered in favor of the Pro-Beijing camp and Democrats will face even more obstacles to filibuster and block the former’s policies, and individuals will be blocked with ease in accordance to the beliefs of Chinese appointed election officers.

In connection with this, a less business-friendly region will subsequently rise, which should cause concern in the international realm. Hong Kong’s coveted special trade status with the United States may be revoked if the city stands no different from other Chinese cities. The United States-Hong Kong Policy Act (or better known as the Hong Kong Policy Act) was enacted by Congress in 1992 which allows the city to be recognized by itself through its own customs and trade systems (separate from the PRC). The legislation has permitted the US to reap the benefits of the greatest bilateral trade surplus worldwide with Hong Kong at US$34.5 billion. The Act has also been advantageous for the PRC: This special trade status has acted as a connector between mainland China and the global arena. The initiation of the “One Country, Two Systems” arrangement has contributed greatly to China’s economic rise through the city’s internalization of the Renminbi and underpinning of large flows of foreign direct investment to Mainland China. The Chinese are able to access global capital markets to conduct equity financing and leasing foreign investment access to the Chinese market can be credited to the links between the Hong Kong stock exchange and the Mainland’s stock exchanges. In 2017, approximately 50% of all overseas-funded projects were approved by the Mainland have ties to Hong Kong interests and Hong Kong’s total capital inflow was over $1 trillion, which was more than half of the PRC’s total. Chinese banks have strengthened their international positions due to Hong Kong’s place as the largest offshore Renminbi market. Additionally, Hong Kong aids Chinese technological advancement by acquiring management and technological expertise.

And why is this all possible? China should recognize the perks of the just and transparent judicial system that Hong Kong possesses, which in turn allows the city to persist as an international economic hotspot. A fair judicial system, which grants Hong Kong citizens with human rights and liberties and protects foreign companies and investments under the Basic Law, promotes a reliable and stable market-friendly climate which is conducive to economic prosperity.

If Hong Kong loses this status, tariffs imposed only on China will also be imposed on Hong Kong, which will hurt the latter’s export-driven economy and the former’s economic success, especially in the present as the Sino-American trade war rages on.

The solution? The US government and other foreign entities, who have greatly benefited from the Asian financial hub, must also play their part in condemning and putting pressure on the PRC for its unethical actions in Hong Kong. On the other hand, China must respect “one country, two systems” and allow Hong Kong to preserve its autonomy and retain its special trade status, which will continue China’s time in milk and honey.