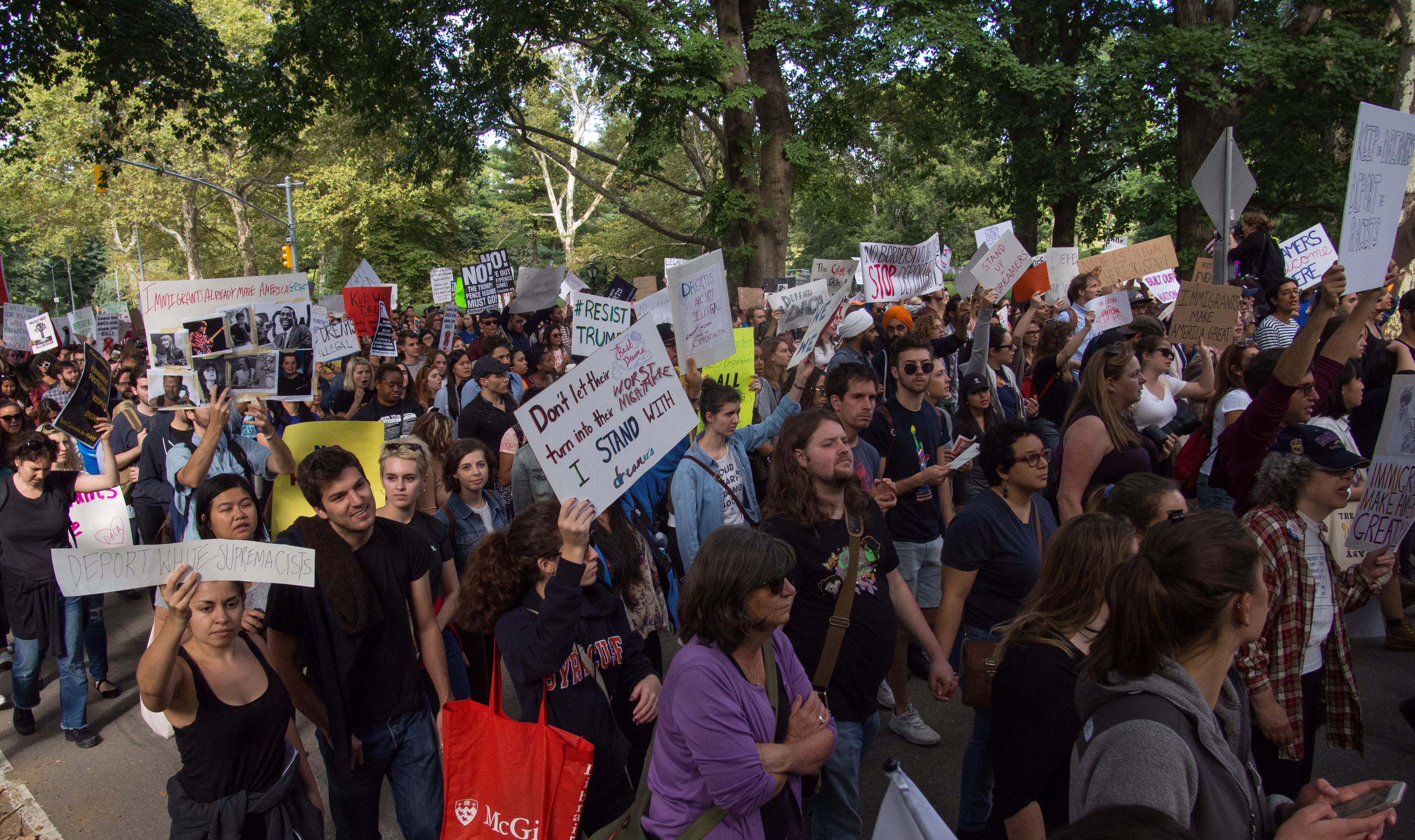 The Positives of Political Polarization

It’s no secret that Americans are extremely anxious about the current state of our political system. Our reasons for this are varied, but perhaps the most frequently discussed is the recent increase in political polarization, or the widening gap in ideology between opposing political viewpoints. Americans are more sharply divided ideologically than at any time in recent memory: median ideological distance between the two main parties in Congress is larger than in over a century. This phenomenon has caused countless disagreements between friends and acquaintances, neighbors and coworkers, that may have never even talked about politics in the past. In fact, one of the few things that Americans on both sides of this split share is a fear of polarization. Although political polarization may be scary, the other options may be worse. In a world over-saturated with political news like ours, it’s all too easy to become overwhelmed and tune out. So, between polarization and the likely alternative of apathy, I’ll take polarization any day.

Before we can realize why we should be more accepting of polarization, we should take a step back to look at American politics as a whole. There is, of course, no shortage of issues that I could point to as fundamentally problematic for the country. However, one characteristic of US politics that comes up time and time again as a barrier to desirable governance is voter apathy and disengagement. US voter turnout is abysmal; likewise, a broad portion of the population feels disaffected by a perceived lack of connection to their representatives or to the two major political parties.

Statistics on these tendencies are so routinely regurgitated that it can be easy to forget why they are so important. The fact of the matter is that democracy, no matter how it is construed, relies on active citizen participation; and in order for citizens to want to actively participate, they must be invested enough in politics to care. Without an electorate that is invested in the government’s behavior, the government is held less accountable, and we end up in a vicious cycle where poor representation and lack of engagement follow on each other’s heels. While it may not seem intuitive, polarization like what we are currently experiencing has the power to engage those who might not otherwise pay attention. When everyone around us is dividing into two camps, we feel compelled to choose a camp as well. Take the 2018 midterms, for instance, which had the highest level of midterm turnout in more than half a century. Clearly, the increased division we are facing is helping bring out passions that were previously buried under all-encompassing apathy.

The Root of the Issue

This begs the question: why, exactly, has the US struggled against this engagement problem for so long? Political scientists posit that part of the blame rests on our electoral system. The U.S. is an anomaly among democratic states in that our elections (at least for the better part of a century) have placed more emphasis on the specific candidate running for office than on their party affiliation. Much of this strangely-placed focus is due to our system of primaries, wherein the two major parties hold elections among their own members to decide which of their candidates will run in the general election. In these candidate-centered elections, the “character” of a candidate has to be discussed more than ideology in order to distinguish between candidates in the primaries. This has the unfortunate side effect of making it difficult to discern the difference in policy that would result from one candidate’s victory over another, making it all too easy to conclude that the outcome of an election was inconsequential.

Candidates have sought to sell a narrative about their life (“I’m from a hardworking family just like you!”) or have promised to take on everything that was wrong with the government (“I’ll fight the special interests in Congress!”). For narrative building as a central strategy, look no further than Jimmy Carter’s famous peanut-farmer background. Or, to take a particularly outrageous example of appealing to anti-establishment sentiment, Dwight D. Eisenhower “held no political position” prior to his 1952 presidential campaign. Rather than articulating any agenda of his own, Eisenhower’s rhetoric consisted almost exclusively of rhetoric critiquing the Truman administration. There’s also no shortage of recent cases. In Richard Painter’s campaign ad for U.S. Senator from Minnesota, for instance, the central promise seems to be that he’ll “put out fires” in Washington D.C. by using Minnesota’s lakes (yes, really).

These claims may hold value for some voters, but they miss a crucial element: there is a notable lack of discussion about policy. Because generic slogans like these can be used by any candidate, their party affiliation is effectively obfuscated. Democrats and Republicans can both come from hardworking families, just like they can both promise to fight big money in government. Party affiliation, until recently, signalled next to nothing to voters about what kind of legislation a candidate supports. When it’s hard to distinguish between candidates, it becomes incredibly easy to tune out politics altogether: if everyone’s the same, why does it matter if I vote? This is the unfortunate logic behind the mass disengagement of the American electorate.

Contrast the past political situation described above with that of today. It would be extremely difficult to argue, for example, that party affiliation is not a signal to voters. In fact, precisely the opposite now appears to be the case: roll-call votes in Congress are very clearly divided on partisan lines. This change is a result of increasing political polarization. Because people’s views are farther apart and disagreements are more frequent, party identification is now more salient than in decades. In other words, when you vote for a candidate, you are likely to have a (relatively) good understanding of what their positions are, simply by looking at the ( D ) or ( R ) next to their name, making the impact of your vote more tangible.

The Benefits of Polarization

It is reasonable to view these developments with a healthy amount of suspicion. Why would we want intensified ideological conflict in Congress? It certainly seems that polarization, and the consequent ideological divide between the parties, may have made it harder for politicians to cooperate. In fact, polarization has been cited as the cause of problems ranging from incivility, to legislative gridlock, to the breakdown of democracy itself.

However, these fears are misplaced. In reality, divisions have made political stances more important, so voters are encouraged to think about where they stand on these issues and express these views to combat a perceived lack of government action. More people are engaging in politics in some form: according to one survey, almost one quarter of Americans have contacted an elected official in the last year alone. This uptick in strong, opposing opinions may seem frustrating in the short term. Yet, we must remember that pluralism is fundamentally good for democracy. By drawing more people into the political fold, polarization has vastly increased Americans’ investment in election results, and thus increased the engagement that is so crucial to democracy. Clearly defined party ideologies have made the stakes more palpable than any time in recent memory. Polarization does bring its set of issues – issues like gridlock, that can only last for so long until one side gains more power – but it is also extremely effective at combating one of problems plaguing American democracy: apathy. Americans may now disagree (and disagree strongly), but it would no longer be accurate to say that a majority of us don’t care about the political sphere.

It may seem that I am jumping the gun when I say that candidates’ personal characteristics are no longer a deciding electoral factor. After all, Donald Trump’s campaign in 2016 was notorious for espousing little to no real policy positions; and, we still have a primary system that encourages these sorts of personalistic appeals. Nevertheless, the fact remains that party identification clearly signals ideological affinity to voters. The 2018 midterms illustrate this clearly. Democrats took control of the House because they offered the millions of voters who disliked Trump a clear ideological distinction from the president, unlike other Republicans who merely differed from him in background.

One of the reasons we actually need substantive disagreement of the sort produced by polarization is because it is easier now than ever before to have a myopic focus on candidates instead of issues. Social media allows candidates to communicate more personally with potential voters – look no further than Donald Trump’s Twitter, or the Instagrams of Representatives Alexandria Ocasio-Cortez and Ilhan Omar. The inescapability of modern media makes our political system run the very real risk of becoming too candidate-centered once again. It’s good, then, for polarization to be a factor here. Continued disagreements about policy are more important to discuss than the latest tabloid scandal about an official’s marriage. Twitter and Facebook can allow political conversations to veer into completely irrelevant territory at best, and spread completely false information at worst. The ideological clarity offered by a sense of polarization allows voters to safely ignore some of this media, since they will still have a sense of what their vote means based on their candidate’s party.

Of course, although it is clear that candidate-centered politics are undesirable, one might also be averse to party-centered politics. It’s understandable that offering more power to two of the most powerful groups in the country might seem a little off-putting. However, polarization doesn’t necessarily increase party power. Instead, it increases the accountability of the party (and its members) to its constituents, since their opinions are more clearly defined and strongly felt than previously. It’s also worth remembering that the alternative would include more leaders who gained power through a cult of personality, who in my mind, deserve a lot more suspicion. Party-centered politics, as is the norm throughout much of Europe, enable the electorate to focus on ideas and platforms, rather than meaningless personal minutiae.

Many Americans are scared of political polarization. However afraid we might be, though, we have to remember that it’s far better for us to disagree because we care than for us to not care at all. Our current political situation is definitely an indicator of nationwide tensions that need to be resolved. Polarization is a catalyst for discussions that need to take place before solutions will materialize. Increasing ideological distance has gotten the American electorate more engaged than any time in the past fifty years. We are now able to hold our elected officials more accountable for representing (or failing to represent) our beliefs. Polarization may pose some issues that need addressing. Yet, without polarization, we may not have even been aware of those issues in the first place – so, we should prefer this polarized America to a potentially unaware America.