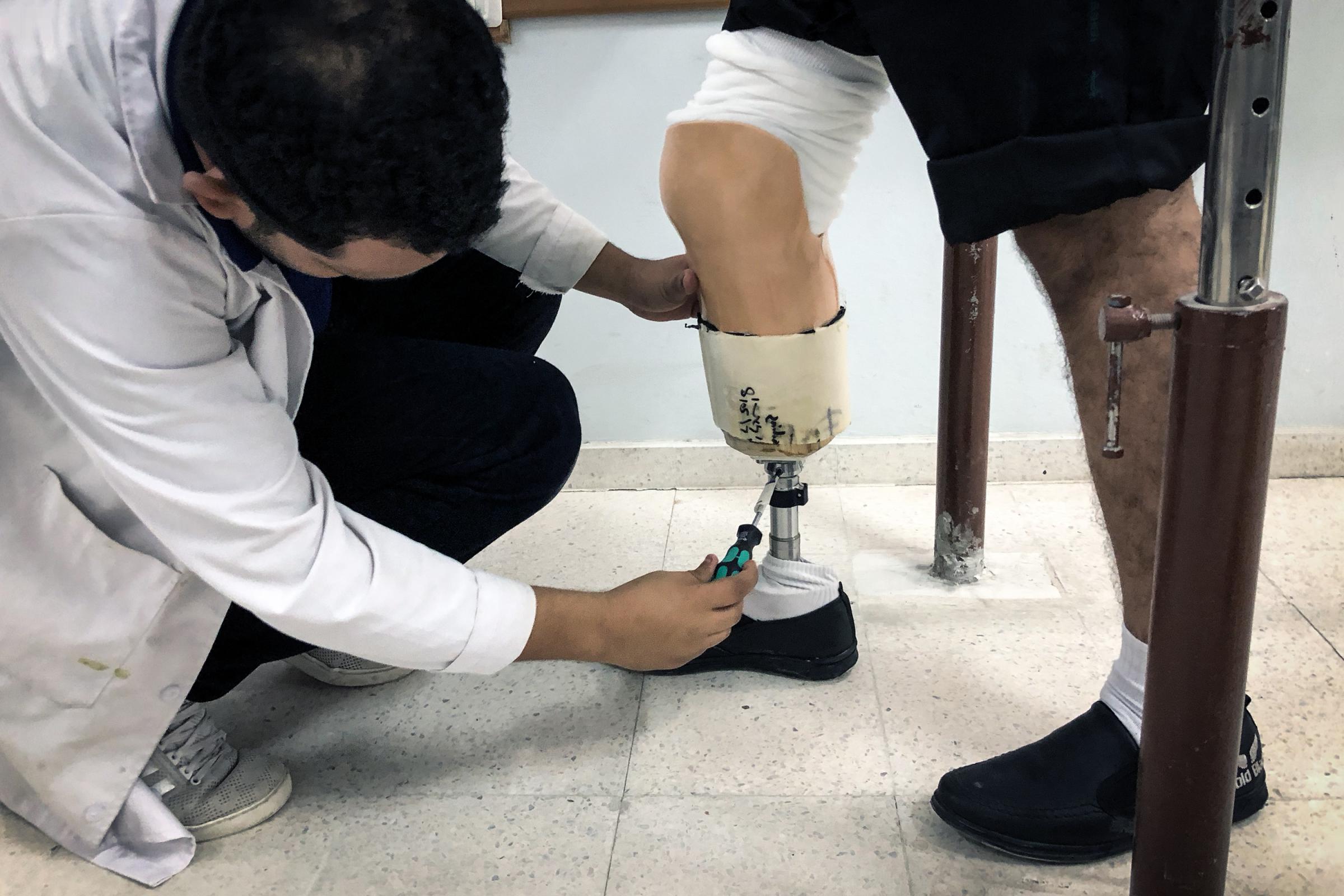 In Palestine, Necessity is the Mother of Invention

In an underground facility rests a prosthetic limbs factory where specialists create and test out their creations from scratch. Doctors in lab coats running around a small space full of plastic molds and sawdust in the air. For these doctors and technicians, necessity is the mother of invention. They are in a rush from 9 am when they walk in until 11 am when the electricity is shut off. Every second on the clock counts for somebody’s new prosthetic leg and a new life where they can walk, run, and even swim again. But why, you might ask, is there such high demand for prosthetic limbs? Is there a shortage of prosthetic facilities and hospitals in Gaza and Palestine? Yes, but that’s only one small part of the problem.

From Inadequacy to Innovation

Palestine and Israel have been in conflict since the “Nakba” or “Catastrophe” of 1948 and this conflict has placed Israel in a dominant position over Palestine. Israel started as a settlement granted by the British Mandate and, after the Second World War, Jews were granted the right to settle there. Over time, Israel took up more land and larger settlements, and today it makes up more than 80 percent of the territory. These settlements not only took up land from Palestinians but also pushed Palestinians into occupied territories that are under the control of Israeli forces. Today, more than three million Palestinians live in the occupied territories of the West Bank and east Jerusalem; these territories lack resources like water and electricity and are under constant surveillance by the Israeli military. This has forced the Palestinian people to innovate.

The Israeli occupation has also negatively impacted the economy of Palestine by restricting the movement of goods and people and by limiting the modernization of Palestinian infrastructure. This reduces the opportunities available for technological development in Palestinian areas such as Gaza City. Yet, despite the lack of resources and goods available, Palestinians have become more resourceful with the little things they have available. How have they managed to do so without the resources or a strong economy to maintain their innovation?

“Growing up in Palestine is like living in an open-air prison,” said Palestinian-American student Yasmeen. Millions of Palestinian youth live in an environment where they are ethnically discriminated against for not following Jewish traditions or carrying the Israeli identity. Yasmeen had to go through three checkpoints every day on her way to school, “I was literally barricaded from getting to school and seeking my right to an education.” After overcoming the first barrier in education, Palestinians face yet another barrier in finding job opportunities and earning higher education degrees. Hala Shoman, wasn’t able to get her Ph.D. in dentistry in Turkey because of the closed border policy in Gaza City. Blocked from getting an education outside of the occupied territories, stopped from traveling abroad for higher learning, and limited in their job opportunities, Palestinians have no choice but to develop from within—their solution is education. Despite the economic and physical barriers, Palestinians have “fostered a creative environment through providing educational opportunities,” said UC Berkeley professor, Hatem Bazian. Education is the biggest resource that Palestinians rely on. There are 50 institutions of higher education in Palestine, with about 216,000 registered students. This heavy investment in education has specifically benefited the youth and put their priorities at the forefront of the Palestinian agenda. Palestinian youth have been competing in world competitions hosted by companies like Google as well as the International Science and Engineering Fair. In fact, the Palestinian economy is heavily dependent on sectors like information technology and bioengineering. One of the programs that Professor Hatem organizes is a summer program in Spain; he told me that higher education institutions abroad, “like the University of Granada have also invested in Palestinian youth by offering educational opportunities to travel and explore the world.” By providing a vibrant space for learning and encouraging young people to seek higher education abroad, Palestinians are fighting against the systemic oppression they are facing through education.

Shaping the Future of Palestine

The Palestinian youth have always been on the front lines of grassroots organizing and resistance. One of the ways that Palestinians are shaping the future of Palestine is through the new method of cyber resistance. Professor Hatem Bazian of UC Berkeley, an expert on the topic of Palestine, told me that technology and social media were not the catalysts for Palestinian resistance but rather the facilitators for creating a bigger more universal movement. The Palestinian information society developed around 1995, when the World Wide Web became a global phenomenon. Palestinian youth played a crucial role in the development of information and communication technology (ICT) in occupied Palestine and universities and nongovernmental organization have played a supplemental role in supporting it. The ICT industry in Palestine has been intertwined with political activism in that Palestinians have used their ICT skills to create political networks. Bir Zeit University (BZU) in Ramallah is an example of an institution pushing for educational youth development by sponsoring ICT programs. BZU had one of the most advanced educational centers in Palestine that prioritized IT development and political activism. This led to the organization of a proactive event in September 1996, when students and youth used technology to participate in activism surrounding human rights issues. The students at BZU created the “On the Ground in Ramallah” website, showing eyewitness reports of Israeli helicopters threatening Ramallah residents as a counter to inaccurate international media coverage. This program is one of many that created a larger network that connected Palestinian youth together; Palestinian in Gaza, the West Bank, and in the diaspora became more unified under this cyber movement. Above all, investment in youth development has been one of the main ways that Palestine has survived under occupation.

The Boycott, Divestment, Sanctions (BDS) movement is another big part of the development of the Palestinian economy. Israeli settlement products dominated Palestinian markets and due to the lack of resources, it forced Palestinians to forgo some of their own products. This created a reliance on the Israeli products and market. However, the “introduction of the BDS international movement energized the Palestinian markets once again,” said Professor Bazian. In 2015, ten years after the introduction of BDS, Israeli exports to the Palestinian economy dropped by 24 percent. The BDS movement began as a domestic cause led by youth in Palestine and later spread to other Palestinian and activist networks around the world, bringing the world’s attention to the oppression of Palestinians. This created strong pressure on international governments to boycott Israeli settler products. The European Union is one of the major state actors that has labeled and banned Israeli products, creating space for the Palestinian economy to grow on an international level.

Ultimately, technological advancement and emphasis on education mean that Palestine could eventually deal with the urgent issues Palestinians are facing, and, well, they already are. The little prosthetic factory in Gaza City is one of those advancements that Palestinians were forced to make in order to deal with injured Palestinians who became limbless from protesting oppressive Israeli forces. This factory emerged to help Palestinian protestors who lost their legs and arms from Israeli bullets and bombs; out of necessity rose innovation.