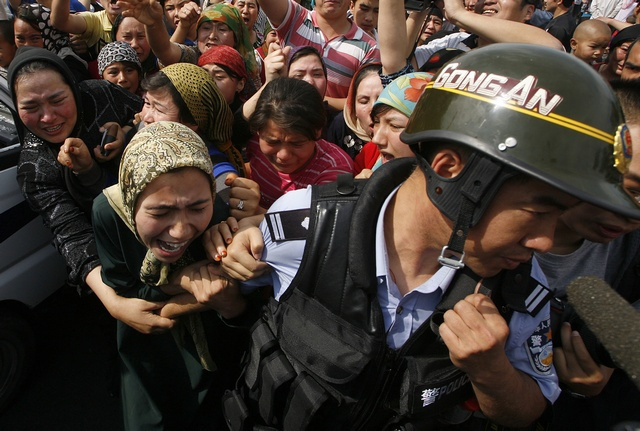 You can stop saying “assalamu alaikum” to your neighbor, shave your beard, tell your children not to speak of their prayers, even try to fake tickets for an international flight, but you can never truly escape the terror. The psychological trauma remains of knowing that every move you make, every word you utter can lead to an immediate detainment of yourself or your loved ones. Nur is one Uighur who has fled the Xinjiang region of China but still “can’t escape the constant, indirect mental torture of what is happening.” What is happening is a dark Chinese policy that has managed to be quite successful in its goal. A policy in which at least one million Uighur Muslim families are separated and placed in mass ‘re-education camps’ to eradicate them of disease. More and more Uighurs are being forced into the camps and less and less are coming out. And China is pretty much getting away with it.

Nur tries to combat her survivor’s guilt by combing through public record and social media accounts, including the government’s official WeChat account, for pictures, videos, and anything to prove the existence of Uighur suffering at the hands of China. But she is fighting time as the Chinese government has realized its paper trail and is deleting evidence while Nur and other citizen activists try to archive what they can. Each piece of information that comes out becomes more valuable as the Uighur population becomes increasingly cut off from an already restricted existence.

There is a history of Chinese oppression of Uighurs in the Xinjiang region. But such blatant crimes against humanity with unabashed, brazen support are being fueled by a new and chilling Islam-is-a-disease narrative.

Religion as a disease, hospitalization as the cure

Xinjiang is the westernmost territory in China where the Turkic Uighur population resides half by their own volition and half by forced isolation. The Uighurs are an ethnic minority that stands in opposition to the Chinese Han majority. The population communicates in their own Turkic language and live largely autonomously from the government, but their most important distinction is that they are Muslim. Most of the Chinese Han majority identify as atheist, and the Chinese government has even recently created a law that forces “vocational training centers” for those “deceived by religion.”

Despite centuries of Uighur and Han conflict, the increasingly horrific treatment of the Uighurs is reaching new levels. The situation has reached crimes against humanity level as the U.S. Congressional-Executive Commission on China has reported the “largest mass incarceration of a minority population in the world today.” The Chinese government has a history of forcing Uighur children to only learn Mandarin, cutting off the region’s internet, and other forms of militant suppression but the region has now turned into an open prison due to a newly renovated and energized effort. It is no mistake that increased government surveillance has coincided with increased populations in internment.

The earliest traces of this new Chinese policy date back to 2015 when state policemen banned Uighurs from publicly celebrating Ramadan and has snowballed into such a far-reaching and multifaceted attempt to destroy the Uighur people. The new legislation providing legal justification for a crackdown on Muslim practices writes that following halal outside of diet, refusing to watch state tv, wearing the hijab, or speaking languages besides Mandarin are illegal. While these rules are nothing to applaud, the situation appears to be much better on paper. The reality is that the citizens still left not in the camps are subject to random seizures of phones, officers with face recognition technology, drones in the shape of birds, and even QR codes embedded everywhere in the homes, even their kitchen utensils. Those that are in the camps are subject to both physical and psychological torture, including being forced to eat pig and drink alcohol under threat of abuse.

Human Rights Watch details the end goal is to place every individual in ‘re-education centers’ in what one government youth leader exclaims, an attempt to “eradicate from the mind thoughts about religious extremism and violent terrorism, and to cure ideological diseases”.

China calls these actions ways to bring “peace and prosperity”  to an extremist religious minority in an area referred to as ‘China’s Syria.’ It is obvious there is some attempt to reference a radical Islamic terrorist image in the government’s rhetoric. However, this rhetoric and these actions indicate intent far beyond combating Islamic extremism, or even Islam in general. The multitude of ways in which the Chinese government is controlling Uighur life indicates a multitude of problems the Chinese government has with that life. In other words, it is not just that Beijing dislikes that Uighurs are Muslim; they dislike that Uighurs are not Chinese.

But why the Uighurs?

But maybe the situation isn’t so simple. If the Chinese were targeting Uighurs for not being Chinese enough then they would also target the Muslim Hui minority or the non-Mandarin speaking Tibetans. Two minorities that share a similarity with the Uighurs but live in much better conditions than the Uighurs.

However, there are more differences between the Uighurs and the rest of Chinese minorities than there are similarities. The Hui are also Muslim but they still speak Mandarin, live in the same cities as the Han, have culturally assimilated, and most importantly, are not political. The Uighurs live in the semi-autonomous region of Xinjiang and equally fight for independence from China. Thus, in the eyes of the government, the Hui are not dangerous because their religious beliefs do not intersect with a political identity. They are Muslim but they still speak the same language as the Chinese minority and adhere to similar lifestyles in the same urban centers, therefore keeping them within the mainstream. The Tibetan minority, on the other hand, are not in the mainstream and still face suppression of free speech and militarism from the government despite an official white paper affirming Tibet’s partial regional autonomy in 2015. The Tibetan are also ethnically not Han Chinese, speak a different language and have a reputation for being political dissenters. However, one key difference is that they are not Muslim but rather practice Tibetan Buddhism, which falls under the more acceptable standard of faith in China.

To complicate even further, the Washington Post has reported that along with the Uighurs other Muslim ethnic minorities, the Kazakhs and Kyrgyz, also make up the population of the internment camps. So why is Islam a ‘disease’ only under certain conditions? Some, like Tahir Imin, argue that the Chinese government presents the minorities they wish to expel as troublemakers who are “sick and not healthy people.” Simply put, Islam is a disease when the Muslims are a threat to the state.

Co-opting the War on Terror  narrative

China has named Islam an illness because being an Islamophobic state is profitable. It makes you rich. When your largest economic rival is entrenched in an ideological fight against “terror,” it might be useful to take a few cues from them.  The United States has been leading a political and cultural movement dubbed the War on Terror that is the recent edition of classic American moral justifications for its industrial military complex project. The world’s most high profile conflicts are fueled by the narrative that the west is fighting for its values from the attacks of barbaric Muslim terrorists. Thus, the Chinese government is taking the West’s ideological war on those whom it views as terrorists and adapting it to a policy for the terrorists within its own borders. Rather than conflicts with traditional weapons, there are now hospitals of psychological torture. From war to disease. Not a particularly original idea considering the historical conflicts caused by disease and epidemics.

However, maybe this argument places too much influential power in the United States. Yes, both countries favor strong trading relations with each other but China is not known for bending at the will of American policy. Individually, China has an independent vision to grow profits and power. The main attempt being a modern Silk Road project, also known as the Road and Belt Initiative, creating new infrastructure on both lands and on the sea. With at least thirty-eight countries, this project is slated to be finished in 2049 but has already cost more than the U.S. Marshall Plan. This massive investment in infrastructure is presenting an opportunity for struggling countries like Malaysia or Greece to grow under China’s supervision. This might be great for their economies, but also limits them to the wants of an oppressive Chinese regime.

China’s crackdown on the Uighurs might be an attempt to get rid of a pesky population in the way of this larger global project. If China wishes to move to the future with dazzling new international trade with China at the forefront, it needs to deal with its dissenters.

So maybe the reality is that China is not using the War on Terror narrative for the approval of the Western states that propagate it but rather for a more calculated reason. It is instead taking tips from the western obsession of the terrorist and creating a better substitute than the original. By creating a version of Islamophobia that is more efficient in eliminating the Uighur problem, China is able to carry out crimes against humanity with a moral justification.