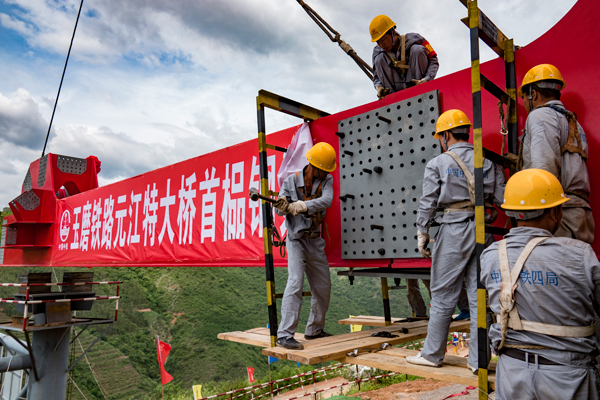 The country is getting its first railway, financed by Chinese loans. Laos has an abundance of natural resources but practically no infrastructure to extract and transport them. Landlocked Laos links with its neighbors, China gets access to a railway through Southeast Asia — it’s a win-win scenario for both parties, Chinese officials say.

Except, that’s not quite the case.

The $6 billion loan makes up half of the country’s entire GDP, and Laos has allowed China to monetize a sizable portion of its land to repay its debt. Even in the short term, Laos draws the short straw. Villas constructed on the outskirts of highland villages house the primarily Chinese workforce. Local Lao are left without jobs.

Laos is one of more than 60 countries linked by China’s Belt and Road Initiative (BRI), history’s largest infrastructure project, which is attempting to construct an overland economic belt of transportation and resource facilities as well as a maritime Silk Road.

What the World Stands to Gain

China’s stated aims of the project are assorted, but President Xi Jinping has always framed the initiative as mutually beneficial.

“China’s opening drive is not a one-man show. Rather, it is an invitation open to all … It is meant to build not China’s own backyard, but a garden shared by all countries,” Xi Jinping said in a keynote speech at the opening ceremony of 2016’s B20 Summit.

In the short term, China exports its industrial capacity to revitalize its slowing economy, and in the longer term, China shapes global trade in its favor. For the developing countries on the other end of the deal, Chinese investment is the only opportunity for large-scale infrastructure. China attracts many countries by placing far fewer restrictions on loans than more traditional institutions, like the World Bank.

Infrastructure is the exact thing some countries need to invigorate their economies. For example, Kenya’s new railway has opened foreign markets both in and out of Africa. Intra-African trade has been extremely low — approximately 10 percent of the continent’s commerce, according to data from the African Union. This is in part due to a lack of interconnecting infrastructure within the continent. The project’s success has inspired Kenya to lobby for more BRI projects that increase regional development.

The Cost of Large-Scale Investments

“These projects are meant to achieve particular aims to China, not fulfill a need of the country they’re building in,” said Will Doig, author of High-Speed Empire: Chinese Expansion and the Future of Southeast Asia. Still, many countries have been eager to partner with China.

“There will always be a market for what China is selling because what they’re selling is really appealing — cut-rate projects for large-scale infrastructure to countries that cannot afford them otherwise,” said Doig. These deals may sound nice, but the cost of doing business with China is often high.

For example, China often demands that their own domestic construction agencies are used to build the infrastructure it finances. According to the Center for Strategic and International Studies (CSIS), a US think-tank, 89 percent of BRI projects are contracted to Chinese companies. For infrastructure financed by traditional institutions, 41 percent of contracts go to local contractors and 29 percent to Chinese.

In addition, Laos, Kenya, Pakistan, Djibouti, Mongolia, and many more have agreed to Chinese loans for the alluring possibility of development at the cost of devastating debt. Constructing a new highway costs 80 percent of Montenegro’s GDP, for example. Completed infrastructure is often leased long-term to China to repay debts, but not all Chinese-built infrastructure is lucrative. A new airport in Sri Lanka was reported to be so empty, guards were hired to prevent local wildlife from inhabiting its neglected terminals. Their new highway is used by farmers to dry rice just harvested from their paddies.

Some analysts claim that China is purposefully leveraging “debt-trap diplomacy” over poor countries to take over the infrastructure it builds. China funded another project in Sri Lanka — the strategic, deep-sea port of Hambantota. Unable to pay it off, Sri Lanka signed a 99-year lease to China for the port and 15,000 acres of land surrounding it. The deal granted China territory only a few hundred miles off the shores of rival-nation India and a perfectly-located position along commercial and military waterways.

A closer look reveals that China may even be fueling corruption and supporting autocratic behavior in floundering democracies to strengthen Chinese dependency. Large Chinese payments were made to support the campaign activities of presidential candidate and BRI-supporter Mahinda Rajapaksa during Sri Lanka’s 2015 elections, according to the New York Times. Sri Lankan officials also claim that during initial negotiations, it was clear China was not interested in the port for purely commercial purposes; it’s intelligence and strategic potential was always in discussion.

Some countries are beginning to change their mind about the BRI. Last year, Pakistan, Nepal, and Myanmar canceled or sidelined three significant hydroelectricity projects funded by Chinese companies. Pakistan, by far the largest country at high risk for debt distress according to a Center for Global Development study, cited tough financing terms imposed by the Chinese as its chief reason for canceling its $14 billion project.

For years, Malaysia had been China’s most reliable investment partner. Deepwater ports, revamped harbors, new rail networks, and artificial islands were all slated for development in the Southeast Asian country.  Now, it’s leading the trend of vocal anti-BRI criticism.

“We don’t need them,” said Mahathir, according to the Associated Press. “With that debt, if we are not careful we can become bankrupt.” Malaysia’s new finance minister, Lim Guan Eng, cited the surrender of Sri Lanka’s new port to the Chinese as a failure his country would like to avoid.

“It is not about the Chinese, it is about the Malaysian government,” Mahathir said on his recent trip to China. The Prime Minister has since toned down the “we gain nothing” rhetoric — China is, after all, still Malaysia’s largest trade partner. By placing blame on his predecessor Najib, Mahathir successful avoided straining bilateral relations or insinuating malicious “debt-trap” intentions. He did, however, warn of a potential “new version of colonialism,” where poor countries find themselves unable to keep up with rich countries in open, free and fair trade.

In a joint statement released after Mahathir’s trip, the two countries agreed to adopt a “strategic and long-term vision” and to “enhance political mutual trust and practical cooperation on the basis of equality, mutual respect and mutual benefit.” China still maintains some BRI projects in Malaysia, and relations are expected to remain friendly.

“The more examples there are of people successfully backing out, that becomes a more feasible option for others,” said Jonathan Hillman, Director of CSIS’s Reconnecting Asia project. “It’s tough. It’s difficult. The nature of the projects is difficult to terminate… and we’re talking about small countries that have little leverage.”

“I think [China is] going to face some pressure to make some adjustments,” Hillman said.

Why China needs to Change

The fact is, China cannot afford to irk its partners anymore. In 2017, China’s foreign investments fell for the first time in years. The trend appears to be continuing in 2018. If China wants to sustain the BRI, it may have to adjust to changing attitudes.

“They’re finding challenges, and one reason is growing skepticism for China’s motives and goals,” Doig said. “We’re starting to approach an inflection point where it’s not clear whether this model is sustainable.”

Pakistan is using the rising criticism as a leverage point. Recently elected Prime Minister Imran Khan is advocating major changes to the $63 billion China Pakistan Economic Corridor, perhaps the BRI’s most ambitious project. Pakistani officials stated this month that they wish to include more Pakistani suppliers and laborers in the project and are asking for social-sector programs to be added as well. Both countries claim to be working on ways to improve the trade balance. Working fairly with Pakistan may indicate China is committed to sustainable development moving forward, rather than predatory practices.

In response to growing criticism, Chinese officials have been downplaying the geopolitical aspect of the BRI, instead highlighting features like job creation. Chinese Foreign Minister Wang Yi said that the Belt and Road is “not a geostrategic concept,” and rejected comparisons to America’s Marshall Plan, an economic aid initiative post-WWII that furthered U.S. global interests.

“The Belt and Road Initiative is in accordance with historical trends, is full of vitality and energy, and as a result has quickly gained support worldwide,” the Chinese foreign ministry quoted Wang as saying.

Giving the BRI a good image should be a priority for China, given its interest in expanding into Europe, which has been generally hostile to the project. Of the 28 EU ambassadors to China, all but one issued a joint letter in April to the Chinese government, sharply criticizing the Belt and Road as opaque, unfair, and not reflecting EU values.

The choices China makes now, at this tumultuous period in the BRI’s history, may be the most important. If the country changes its practices and cuts better deals with partners, we might see the Belt and Road Initiative only grow in popularity. If they continue down the same path, however, their effort may all be for naught.