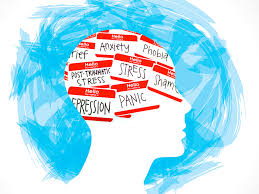 This article contains themes regarding depression and other mental health complications. Reader discretion is advised.

Psychiatric patients in Ghana’s prayer camps aren’t only tied down by the constraints of their mental ramifications, they are physically shackled, tied to dark concrete cells, and forced to eat, sleep and defecate in confinement. This treatment that seems to describe horrific conditions of a prison camp is the reality of the existing hospital care for those enduring mental health complications in 2018. Mental asylums and camps where emotional and physical abuses of psychiatric patients continue to be prevalent and perpetuate a stigma toward the mental health community throughout much of the developing the world. While the mistreatment of people undergoing mental health complications seems to be a narrative exclusive to the Global South, it by no means is, as nations such as the United States continue a system of neglect and maltreatment of those who face mental illnesses through economic and cultural means.

Mental health stigma continues to be perpetuated through a variety of mechanisms throughout the developing and developed world. The stigma primarily stems from cultural traditions and practices, such as the Christian traditions practiced in the Prayer Camps of Ghana, as well as significant lack of knowledge on the subject of psychiatric illnesses throughout much of the world, such as in China.

The primarily agnostic and Confucian nation maintains traditional practices that supersede the importance of modern research on the topic of mental health. The emphasis placed on the Confucian values of lineage purity and family honor is the primary cause of dilemmas for psychiatric patients. The most severe impact of these ingrained traditions is a fear to seek treatment, as admitting to having a mental health complication could lead to severe ostracization in a family and affect an individual’s suitability for marriage according to a study by academic Elizabeth Kramer. Beyond ostracization of psychiatric patients, China’s population maintains beliefs in certain superstitions and the use of acupuncture along with herbs to ward off evil spirits or demons that locals believe to be a cause of mental health complications.

A similar belief in superstition is shared by the dominant Christian culture in Ghana and its treatment camps. Prayer Camps are based on loose concepts of missionary work brought to the nation in the 1920s, and while their history has been debated, the continuation of these camps has been based on a decades-long misperception of mental health. Fear caused by superstition is the main reason why people undergoing schizophrenia and depression continue to be discriminated against. This discrimination typically manifests in the mistreatment of a person who is less capable of functioning due to their health complications and can thus quickly become perceived as being less valuable to society. These people can also be considered to be a threat or violent based on local beliefs in the superstition that such reduction in productivity may be a result of the involvement of demons or other anti-religious figures.

While Christian private organizations remain primarily responsible for the functioning of oppressive camps, the function of private organizations in Western mental health also remains a key aspect of the mental health crisis in developed countries such as the United States. The real danger of the continued involvement of the private sector in mental health in the U.S. is its potency to inadvertently raise prices for antidepressants and capture patients in a potentially-disastrous cycle of ‘discontinuation syndrome,’ which is a phenomenon where users begin to experience withdrawal systems and need to continue purchasing antidepressants or the medicine that they require to treat their mental condition. In addition, antidepressants do not possess a surefire method of working for individuals which can result in high costs in the initial trial and error process.

Legislation such as Medicaid however, has allowed for there to remain low-cost options that will not be drastically increased despite the fear of discontinuation syndrome leading to substantially higher costs. According to a psychiatric paper published in 2014 by Chekroud AM, “Some generic antidepressants cost less than $10 per month (free under Medicare Part D and Medicaid and the Children’s Health Insurance Program).”

This information could reach patients and potentially get them to be enthusiastic about seeking antidepressants as a potential start to their treatment. The fear for individuals is not purely financial, however, as they do not merely fear the apparent financial burden, but also the cultural implications of receiving treatment.

The cultural stigma attached to mental health is widespread throughout the United States. This stigma is less communal-based than in developing nations and isn’t as necessarily scrutinized by whole communities based on local beliefs or superstitions. It is rather based on the individual’s fear of attaining treatment because of what colleagues, loved ones or family members might perceive about this person. While this is primarily due to the lack of knowledge about psychiatric illnesses in the United States, the media may also have a role in perpetuating stigma toward members of the mental health community according to Patrick Corrigan, Psychology Professor at the Illinois Institute of Technology.

“Every time something really bad happens, people think it must be because of mental illness,” Corrigan said. “If a woman drowns her children, people speculate—the news media speculates—that she must be off her medication.”

These stereotypes that are perpetuated by the media and restricted media content that does not depict the widespread nature of mental health complications is just one of the sources of limited information that Americans have on mental health. The vast majority of Americans continue to have a limited understanding of the implications of mental illness, and view its treatment as either being unsubstantial or as useless as they tend to either picture depression, anxiety, and other mental health complications as being not serious enough to be treated or beyond treatable. According to a published study by the Journal of Health and Social Behavior, 68 percent of Americans do not want someone with a mental illness marrying into their family and 58 percent do not want people with mental illness in their workplaces.

The study starkly contrasts the attitude toward mental health in other Western democracies, such as in Canada. According to the Canadian Global News, “Eighty-five percent of Canadians surveyed say they consider mental health to be as important as physical health – another 12 percent say it’s even more important. Half of Canadians (49 percent) say they’re personally more comfortable talking about their mental health compared to two years ago.”

What aspect of society in two of the world’s most recognized western democracies explains such a significant difference in public opinion? Researchers at the Atlantic believe that low subsidization from government efforts in healthcare and behavioral health centers may be the explanation for why the United States, which lacks a universal health system, is incapacitated in this regard compared to Canada which takes pride in its state-sponsored healthcare that has improved hospitalization for patients especially youth by increasing hospitalization by 67 percent.  The United States still is the biggest global spender on healthcare, however, which seems to contradict this point regarding hospitalization. However, according to the Associated Press, “90 percent of beds in state hospitals have been eliminated, leaving only the streets, jails, or prisons for those with serious mental illness. Twenty percent of the beds have been eliminated in just the last five years.”

This under-resourcing of mental health and behavioral centers make them some of the most under-resourced and understaffed hospitals. As a result, staff members are constantly overworked, stressed and consequently can be very harsh around those who have been at risk of suicide, treating them more like prisoners than patients by keeping patients in confined spaces, stripping personal possessions and restricting them to very limited visiting hours. Congress simply doesn’t allocate enough of the health budget to improve facilities and coordinate in-depth training for staff at these behavioral centers, and as a result, our punitive treatment of those undergoing mental health complications and who are at risk of suicide continues to be perpetuated.

The issue of mental health remains very complex, and even an in-depth analysis of it cannot reveal the many nuances of mental health stigma and the various degrees by which our Western system of mental healthcare remains broken. However, while years of cultural tradition in the Global South may require a long-term approach at increasing societal awareness about the importance of mental health, the West has both the power and resources to model systems that are more restorative. These programs can not only help people with mental health complications but also those who suffer from drug abuse and homelessness as a consequence. International efforts such as the World Health Organization’s World Mental Health Day, along with recent trends in implementing stress-relieving programs in the workplace and universities, are a step forward in raising awareness about the importance of mental health, but they still do not fundamentally better our understanding of the substantial nature of mental illness and need to treat mental health as a legitimate aspect of our wellbeing.

Even within UC Berkeley, meme pages and social media continue to reinforce stereotypes surrounding mental health complications and oversimplify their nature without considering the implications and triggering potential of self-deprecating humor. While humor is a mechanism by which many people legitimately cope with stress, it’s time we understand and take ownership of the role that we have in ensuring that we do not neglect the significance of mental health or oversimplify it. Taking these steps might not imply drastic mental health policy changes internationally, but it will allow for us as individuals to combat stigma and prevent perpetuating a global crisis where people fail to recognize the importance of mental health to their physical well-being.