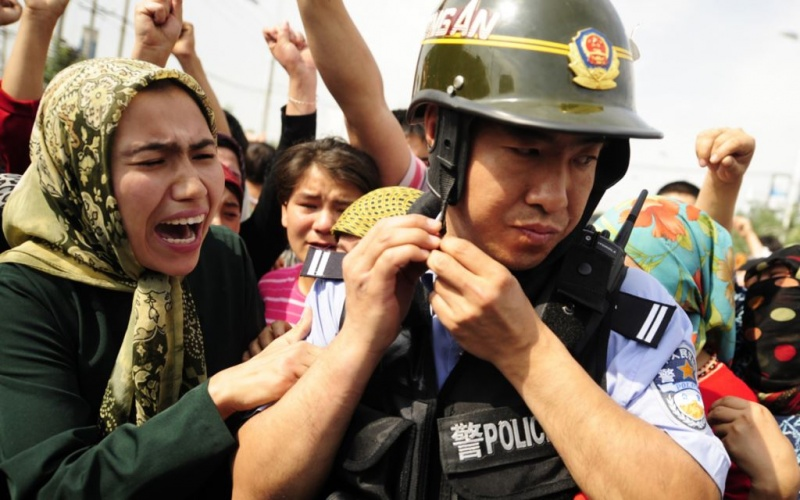 The capital of the Chinese province of Xinjiang, Urumqi, looks like many Chinese cities. The horizon is full of construction machinery creating new factories, high-rises, and office buildings. More striking is that the streets of the developed sector are largely populated with ethnic Han Chinese. The Chinese government has incentivized Han Chinese to move to the region for decades, and today a city once symbolic of ethnic Uygher culture is 75percent Han Chinese. The 12 percent and rapidly declining portion of the population of Urumqi that is ethnically Uygher is concentrated in the slums, where the new Han population can forget that they exist. However, with their money running out, the Chinese government will soon see the populations previously exiled to the slums utilize violence to gain their voice.

Clearly, China hasn’t left its colonial past behind. Instead of treating the Uygher population as Chinese citizens, they are attempting to eliminate everything that makes them distinct so that they are indistinguishable from their Han counterparts. China does not seem to view diversity as a strength, but rather as an obstacle to be overcome, and the Uyghers aren’t going quietly. The Uyghers have responded with terrorist attacks that have inspired the Chinese government to impose increasingly draconian policies. The Chinese government has banned wearing Islamic religious garb, public prayer, and homeschooling children in religious doctrine. China has also taken control of the education of Islamic leaders in Xinjiang, and, today, one must undergo the Chinese government’s state-sanctioned curriculum in order to even teach Islamic religion. It is a vicious cycle that can only result in more violence.

Turmoil Within The Economy

In China, there is a significant gap between the well-heeled urbanites and the poorer residents of the countryside. In addition, the pollution in China is legendary. Despite these issues, China is spending over $8.6 billion USD annually in order to maintain its grip on power in Xinjiang. That is $8.6 billion USD annually dedicated to the eradication of a race rather than the elevation of their society as a whole, and they do not have the money to burn. According to the International Monetary Fund, China accounts for 43 percent of the increase in worldwide debt  since. One Chinese lawmaker, Yin Zhongqing, reports that implicit local debt in China is at least $2.9 trillion USD as of August 2018, which has inspired credit rating companies such as S&P to downgrade China’s credit.

While some may be skeptical of the grim warnings from international bankers, the consequences of China’s debt crisis are playing out in cities across China. This September, violent protests erupted in the southern city of Leiyang after debt forced the regional government to roll back social services. This past August, large groups of investors gathered in Beijing’s financial districts to protest massive losses caused by government-affiliated peer-to-peer lending platforms. Police forced protestors onto buses and away from the scene. Finally, and most relevantly to the Uygher conflict, in April of this year the Xinjiang government, led by Han Chinese officials, put a halt to infrastructure projects in the region until they could ensure they had enough money to complete them.

Predictably, these local debt crises have already precipitated massive backlash from local populations toward their governments. With the additional factors of human rights abuses, lack of economic opportunity, and violence against the Uygher people in Xinjiang, the situation in Xinjiang is much more volatile than elsewhere. According to the USAID report, “Guide to the Drivers of Violent Extremism,” the major drivers of violent extremism include “high levels of social marginalization and fragmentation, poorly governed or ungoverned areas, government repression and human rights violations, [and] cultural threat perceptions….” These factors are all present in Xinjiang. There are vast disparities in employment and income between the Uygher and Han people, “re-education” camps for Uyghers who violate the Chinese government’s anti-Islamic laws, and far-reaching prohibitions that prevent Uyghers from continuing their cultural practices.

While the Chinese government spends immense amounts of resources to stifle the inevitable backlash from such policies, the key element that changes an impoverished population into a population that resorts to violent extremism is the perception that the social support they expected to receive has been taken from them. While the Chinese government’s treatment of the Uyghers is inarguably inhumane, history is littered with oppressed populations that have remained docile. The Roman poet Juvenal noted that citizens are more than willing to abandon their rights as long as they are compensated with “bread and circuses.” There is no such compensation for the Uyghers. As mentioned previously, in April of this year, the Han government of Xinjiang halted all infrastructure projects in Xinjiang. In August, a major government-sponsored construction and military contractor in Xinjiang missed a payment on bonds worth $73 million USD. The government of Xinjiang is running out of money, and has already begun cutting programs that provide jobs and services to the Uygher population. The current political climate of the countries neighboring Xinjiang will ensure that violent extremism results from the economic contractions Xinjiang will inevitably undergo.

The growth of the Taliban is important context for understanding what will occur in the impending Uygher-Chinese conflict. In August and September of 2018 alone, the Taliban has killed over 100 civilians, security forces, and other combatants in Afghanistan. There are still dozens of Taliban training facilities within Pakistan and Afghanistan, and the Taliban is gaining strength and territory. According to Air Force Maj. Gen. James Hecker, members of a growing Uygher militant group, the Eastern Turkestan Islamic Movement, were found in February of 2018 operating with Taliban members within Afghanistan. As the Taliban’s power grows, their ability to train and recruit Uyghers to join their violent extremist movement will also grow. Without maintaining high levels of spending on infrastructure and social programs in Xinjiang, extremist groups like the Taliban will continue to find fertile ground for recruitment among Uyghur populations.

China’s approach to fighting radicalization is similar to policies previously or currently being enacted in the UK, the U.S., France, and other nations. However, while it may seem intuitive to increase security in light of extremist attacks, it only pushes the marginalized populations at risk for radicalization further into the periphery. That is why China feels forced to sink more and more money into security infrastructure, while receiving diminishing returns for safety in Xinjiang. This same trend has been observed in the UK, where the “Prevent” anti-radicalization campaign has stigmatized predominantly Muslim communities through increased surveillance, profiling, and anti-Islamic rhetoric. It has widely been considered to be  ineffective, as it pushes Muslim youth towards extremism.

Instead, China must turn away from punishing policies that further ostracize and humiliate Muslim members of Chinese society. In Denmark, the government has implemented the Aarhus model of countering extremism. The Aarhus model works to provide counseling and employment for individuals previously engaged or interested in extremist activities; facilitate dialogues between the government and Muslim communities; and create networks of adult members of the community committed to preventing radicalization of youth within their own communities. The Aarhus model, contrary to China’s current model of countering extremism, actively avoids punishing behavior in favor of working to help ostracized populations integrate into their communities. For a fraction of the cost of China’s security state in Xinjiang, the Aarhus model has reduced the rate of radicalization in Denmark to such a degree that only one individual left Denmark to fight for an extremist group in 2015. In other European countries during the same time period, rates of radicalization spiked.

China continues to further exclude the Uyghers from employment, from holding office, from practicing their religion, and even from testifying to international bodies about their abuse. In turn, radicalization only continues to get worse in Xinjiang. As Seyit Tumturk, a Uygher activist, said in a 2017 interview, “We [Uyghers] are losing the deradicalization battle,”and China is running out of money to turn this battle around. The Chinese government needs to adopt an entirely new approach like the Aarhus model, or else they will be bankrupt by the time their extremism problem erupts.