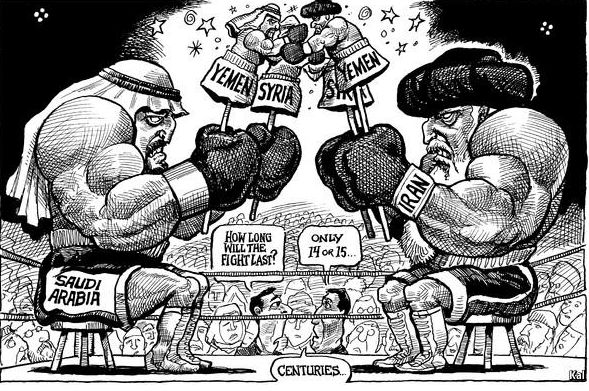 Saudi Arabia and Iran’s Rivalry: Politics Under the Veil of “Deep-Rooted Sectarianism”

During the 2015 Hajj season, when a tragic stampede of pilgrims killed at least 2,426 people, including 465 Iranians, a war of words commenced between Saudi Arabia and Iran. While Iran’s Ayatollah Khomeini accused Saudi Arabia of murdering Muslims as they fulfilled their Haj duty, Saudi clerics accused Iran’s leaders of not even being Muslim. The world watched as each side sought to delegitimize the other; analysts cited the “deep-rooted” Sunni-Shia sectarian divide as they explained the Muslim versus Muslim war unfolding before their eyes. This deep-rootedness, however, is contested. The Sunni-Shia divide has only been politicized in this way for the past few decades. The Iranian Revolution in 1979, and the establishment of Velayat al-Faqih, a theocratic government based on Shi’ism challenged Sunni hegemony in the Middle East, ushering in an era of Sunni-Shia rivalry between Saudi Arabia and Iran. Today, both countries fan the divide for their geopolitical interests and smaller, weaker countries like Bahrain and Yemen pay the price.

Origins of the Divide

When the Prophet Mohammed died, the Muslims were left without a leader. Through shura consultation, the majority of the Prophet’s companions accepted Abu Bakr as caliph or successor, to Mohammed. However, there was a small minority who rejected his leadership. They believed that the successor of the Prophet had to be ‘Ali Ibn Abi Talib, a cousin of the prophet and husband of his daughter Fatima, by virtue of his belonging to of “ahl al bayt”, or the house of the Prophet. This disagreement paved the way for the Sunni-Shia divide, which persists to this day. Following the assassination of Ali Ibn Abu Talib by Ibn Muljam in 661 CE, Muawiya became caliph and brokered a deal with Hassan, ‘Ali’s eldest son, forcing him to give up his claim to the caliphate. Despite this deal, the Shia still considered Hassan as the second Imam or divinely inspired successor of the prophet. Before dying, Mu’awiya named his son Yazid to be his successor, in what was the first instance in Islamic history where the caliph was appointed on a dynastic rather than consultation basis. Consequently, Ali’s younger son, Hussain refused to pledge allegiance to Yazid and embarked on a journey to Kufa with his followers. Yazid responded by sending a large army after Hussain, who on the tenth day the of the month of Muharram (61 AH/680 CE)—known today as Ashura—dealt Hussain and his followers a painful defeat in the Battle of Karbala. The death of Hussain remains in the collective memory of Shia Muslims and is the root of the hatred between Shia and Sunni Muslims. Nevertheless, as many historians point out that “Sunni and Shia Muslims have lived in harmony for many more years of Islamic history than they have fought.”

Commentators and analysts who are fast to attribute conflicts in the region to “deep-rooted sectarianism” fail to recognize that, in the region, conflict has traditionally developed on ideological and not sectarian lines. During the second half of the 20th century, it was the struggle between Pan-Arabists and Pan-Islamists that shaped local conflicts in the region, not the Sunni-Shia sectarian divide. For instance, in 1962, when Nasserist Pan-Arabism posed a threat to the Saudi monarchical order, Saudi Arabia intervened in Yemen on the side of the Zaydi, a Shia-offshoot, against the Nasser-inspired Republican movement. The rivalry between Saudi Arabia and Iran today is thus best understood as a classic balance of power struggle, with sectarianism as one of its components but not its root. For ultimately, the battle boils down to competition over regional hegemony – power, resources.

Iraq, the “Shia Crescent” and a New Middle East Order

The Modern Middle East, as it was shaped following the fall of the Ottoman empire, remains Sunni dominated, with Shia minorities — and rare majorities — scattered around. This hegemony appeared to be under threat in 1979 when Ayatollah Khomeini led the Iranian revolution based on the doctrine of Wilayat al-Faqih ––which requires that political authority must lie with Shia jurists. The revolution promoted the idea of divinely inspired leadership, and arguably awakened Shia collective identity across the region. In response, Saudi Arabia accelerated Wahabi Sunni propaganda in its sphere of influence. To its relief, the strong states across the Arab world at the time, from Iraq, and Egypt to Bahrain, successfully quelled Shia movements, either through buying off the populations (oil rents) or silencing dissent. As a result, despite the shock the revolution created, it soon became clear that Iran failed to export its revolutionary ideology beyond its borders ––with the exception of Hezbollah in Lebanon. However, this dynamic was reversed in the wake of the 2003 US invasion of Iraq and the removal of Saddam Hussein. In 2005, Saudi Arabia and the Sunni Muslim world witnessed Iraqi Shias evoke the battle of Karbala and Hussein’s martyrdom as they celebrated the establishment of Shia led regime (for the first time ever) under Noor Maliki. They were not pleased.

Adding to that, Vali Nasr, in his book “The Shia Revival: How Conflicts within Islam Will Shape the Future,” argued that with the growing power of Iran and the empowerment of Iraqi Shia following the 2003 US invasion, Shia political authority will grow across the region. “In time, ‘Iraqi-ness’ and ‘Bahraini-ness’ and even ‘Lebanese-ness’—given the Shias’ favorable numbers there—may come to mean forms of ‘Shia-ness’ just as Iranian nationalism has long been entwined with Shia identity. Against this background, the fear of a “Shia Crescent” stretching from Damascus through Baghdad to Tehran, ” expressed by King Abdullah of Jordan grew rapidly among Gulf Monarchs. From this moment on, Wahhabi propaganda alone was not enough to counter the growing power of Iran in the region.

Saddam’s downfall was not the only blow dealt with Saudi Arabia, it was the first in a series of blows. Sunni hegemony under Saudi Leadership in the region was further threatened by the growing popularity of Hezbollah across the region following the 2006 Lebanon war and their alleged defeat of Israel, as well as the Arab Spring, which provoked protests in Saudi Arabia Eastern Shia populated region and threatened the Sunni dominated regimes of Yemen and Bahrain. This time around the regional climate was not in favor of Saudi Arabia as it was in the wake of the 1979 Iranian revolution. In the post-2003 Middle East order, the strong states that have traditionally co-opted Shia majority populations and silenced them no longer existed. Instead, in Yemen Ali Abdullah Saleh, failed to resist a long time ally of Saudi Arabia was facing serious challenges to his rule from the Houthis, In Bahrain, the Khalifas were facing Shia led protests, and in Lebanon, Hezbollah remained defacto a state within a state. Additionally, the US-Iran nuclear deal has shaken Saudi Arabia, as it became apparent that they can no longer depend on the US in combating the growing influence of Iran in the region.

Saudi Arabia could not afford more losses in the region. The resolve was the following: No other Arab country historically ruled by Sunnis was to fall to the Shia and join Iran’s sphere of influence. In Bahrain, Saudi Arabia sent troops to quell the protests. Similarly, in Yemen, Saudi Arabia launched an assault on the Houthis, which analysts argue is driven by the Saudi’s desire to assert their power and counter Iran’s growing regional influence.

“An Arch of Failed States”

Since 2003, the general trend in the MENA region has been one of state failure and weakness, from Syria and Lebanon to Yemen. Local actors, in the absence of a strong state, look for help outside, and sectarian identities are exploited in this search. To the words of a Senior Researcher at the Brookings Institute, “people in these countries to look to sectarian identities and groups for the protection and material sustenance that the state either could or would no longer provide.” They find willing patrons, Saudi Arabia and Iran, who in their classic battle for regional hegemony, exploit these increasingly salient sectarian identities.

With Bashar Al-Assad close to victory in Syria and Saudi Arabia’s campaign stalling in Yemen, the Saudis appear to have lost ground in their proxy war with Iran. While headlines like the Hajj incident may lead many to believe this new cold war is the result of deep-rooted sectarianism, a look at Saudi Arabia’s fresh efforts to re-open nuclear energy talks with the U.S. reminds us that the rivalry between Saudi Arabia and Iran is primarily political rather than sectarian. The question is first and foremost one of power, not identity.