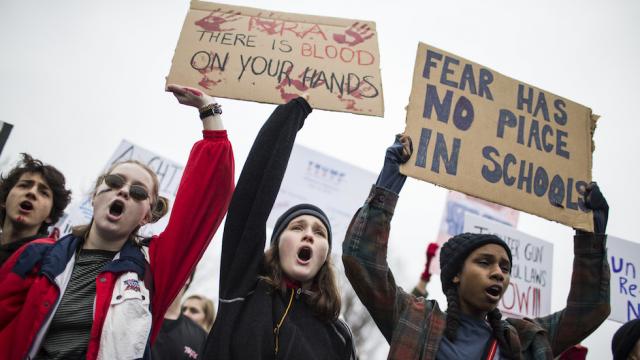 Are Protests Powerful? (It Depends)

Black Lives Matters protesters in Missouri stand together along a highway, with locked arms, chanting and holding signs that read “black lives matter” and “say their names.” But they are surrounded. From above, the buzzing of helicopters compete with the cries of the crowd. On the ground, S.W.A.T. officers appear and the police threaten arrest and the use of chemical munitions.

Cut to demonstrators in Washington D.C. Thousands of protesters march in solidarity against gun violence, calling for gun reform and accountability from politicians. A student on stage asks the crowd to remember her brother Ricardo, who died due to gun violence, and the crowd chants along with her. No police or threats of chemical munitions to be heard.

This stark contrast between the two different protests demonstrates the different attitudes and responses to protests by the American public.

According to a poll by the Public Religion Research Institute, the American public generally agrees that protests against unfair government treatment make the country better. While 63% of the public said that protesting against unfair government treatment is always good for the country, only 32% disagreed. Their level of support for protests, however, differs based on the issue. For example, the public is particularly unsupportive of protests during wartime because in a time of external threat, they have less tolerance for internal dissent. Thus, context can be important in determining whether a protest is supported or not. Another important factor that influences the level of support or response to a protest is by who is involved. According to a Public Religion Research Institute poll, 67% of white Americans agreed that protests against government mistreatment improve the country, but when asked whether black protesting makes the country better, only 48% of white Americans agreed. On the other hand, 65% of non-white Americans said that black protests are good for the country. This difference in level of support can also be seen throughout history.

In the 1960s, the Black Panther Party was vilified as a serious threat and danger to society. Instead of trying to gain power through politics, the Black Panther focused on a series of community-based initiatives. One was in which they formed “police patrols” throughout neighborhoods and cities, creating a sort of “neighborhood watch.” These “police patrols,” however, resulted in confrontations with the police, reinforcing the aggressive image of the party. Furthermore, as the party became more militant and engaged in violent shootouts with police, leading to the death of many members of the party, they became increasingly associated with violence and danger. These events, as well as the party’s arming of its members, reinforced a violent image of the Black Panther Party. Even the news and media contributed to this view of the Black Panther party. For example, the front page of The Sacramento Bee in 1967 read, “Capitol is Invaded,” in response to a protest by the group at the state capitol. This shaped the perception of the group and made them look like an imminent and powerful danger. The government also played a crucial role in shaping the image of the Black Panther Party. In the 1960s, FBI Director J. Edgar Hoover deemed the Black Panther Party as a “black nationalist, hate-type organization” that needed to be controlled by COINTELPRO. COINTELPRO, short for Counterintelligence Program, was a controversial program instituted under President Hoover that tried to subvert any movement that the government considered a “potential source of civil disorder.” One way in which COINTELPRO did this was by promoting violence between the Black Panthers and other black organizations in order to undermine public support for the party and its goals. Furthermore, the Black Panther’s reliance and guns and violence made whites see the Black Panthers as extremists and a “group of thugs unified behind militarists trappings and leftist political ideology.” Thus, there was a fear of blacks exercising their rights and protesting, making many white Americans unsupportive of the Black Panther party and the black power movement.

In contrast, the LGBTQ+ movement in the 1960s and 1970s  received a different response and level of support from the American public. Although gay organizations like the Mattachine attempted to fight for gay liberation and equality during the 1950s, they were quashed by the pressures of McCarthyism and the Lavender Scare, leading them to move away from political agitation and organizing. Inspired by the militant protests the 1960s, however, the gay liberation movement became more bold. This shift was embodied in the Stonewall Rebellion in 1969, where those in the LGBTQ+ community fought back against police harassment. From this point on, the gay liberation movement became more outspoken and demanding. For example, the Gay Liberation Front called for better treatment and view of gays, by fighting against the use of the words like “dyke” and “faggot.”  Furthermore, they organized protests to in order to pressure politicians to support gay rights and pressure them to end job discrimination and police harassment against gays and lesbians. In relation, the gay liberation movement also fought against the American Psychiatric Association’s designation of homosexuality as a mental illness. As a result, the APA’s board of trustees removed homosexuality from its list of mental illness and later a caucus of gay psychiatrists was formed. Prominent gay leaders like Harvey Milk encouraged gays to “come out” as a way to end prejudice against them by showing people that homosexuality is a “normal” part of society. This tactic was effective because it allowed Americans to see gays as normal citizens and people; co-workers, neighbors, friends and family. This message and strategy continued to carry a strong influence. In the early 2000s, gay rights leaders and psychologists began to focus on a message of “love and commitment.” By focusing on the humanitarian idea that gay people want to love and commit to their partners like anybody else, they garnered more support for the LGBTQ+ movement. In this context, Ted Olson, President George W. Bush’s former lawyer in the Justice Department, stated his support for gay marriage, asking how conservative politicians could oppose a relationship in which two people want to be committed to one another. Because the LGBTQ movement was able to shape their protests and messages to reduce fear and prejudice, they were able to gain more ground and support from the American public. Furthermore, because the issue at hand was different and the politics were not racialized, the LGBTQ movement was able to gain more steady support and break away from prejudice and hatred to a certain extent.

Today, there is a stark difference in response to the March for Our Lives movement and the Black Lives Matter movement. Over recent months, the March for Our Lives movement has gained considerable political and public attention. At the March for Our Lives rally in Washington D.C., protesters chanted, “Enough is enough!” and “Welcome to the revolution!” calling for a comprehensive gun reform bill. Student activists also called out politicians for choosing “death” by taking money from the National Rifle Association. Among the many supporters of the movement were students, parents, teachers, as well as people across all generations. Martin Luther King Jr.’s granddaughter, Yolanda Renee King also attended the event and told the crowd that she also “has a dream: ‘Enough is enough.’” Many celebrities also voiced their support for the movement, with celebrities George Clooney and Paul McCartney coming out to march with the activists. Others like Oprah Winfrey and Steven Spielberg have donated money to the cause. In response to the march, the White House expressed support, stating that they “applaud the many courageous young Americans exercising their First Amendment rights today.” Moreover, a recent POLITICO/Morning Consult poll showed that, 68% of voters say that they support stricter gun control laws, the highest level of support in twenty-five years.

In contrast, the Black Lives Matter movement has not received much support for its political cause of racial justice. Public opinion polls indicate that a majority of Americans have a negative view of the Black Lives Matter movement. The support is also divided along racial lines; only 35% of whites have favorable view of the movement, compared to 83% of blacks who have a favorable view. One reason is that the movement is seen more as a danger rather than a practice of First Amendment rights. For example, after a violent protest in Baton Rouge, Louisiana, a lawsuit accused Black Lives Matter leaders for inciting “‘disdain, hatred and violence against police.’” Furthermore, politicians like Mike Huckabee stated that he was “appalled” by the Black Lives Matter movement and that they magnify merely “magnify” the problems, rather than the solutions. Most significantly, a recent FBI report asserted that there is a threat of an “emergent domestic terror threat” which they call the “Black Identity Extremist (BIE) movement.” The report argues that the BIE movement exists and that “black activists’ grievances about racialized police violence and inequities in the criminal justice system have led to retaliatory violence against law enforcement.” Under this report, even nonviolent black activists can deemed a part of the BIE and face violations of their civil liberties. This parallels the similar tactics the government and FBI used in the 1960s and 70s with COINTELPRO to investigate, intimidate, and disrupt black civil rights groups. This difference in support has led to an outcry by the African American community. According to Black Lives Matter Network co-founder Patrisse Cullors, “white people get to be everything. They get to [be] victims, they get to be heroes.” In contrast, African Americans who have been fighting against police brutality and fighting for gun reform laws have been “demonized, obfuscated, and overlooked.” This contrast in view and support of March for Our Lives and the Black Lives Matter movement suggests that the power of protests and marches to affect political and social change depends on the issue and people involved.