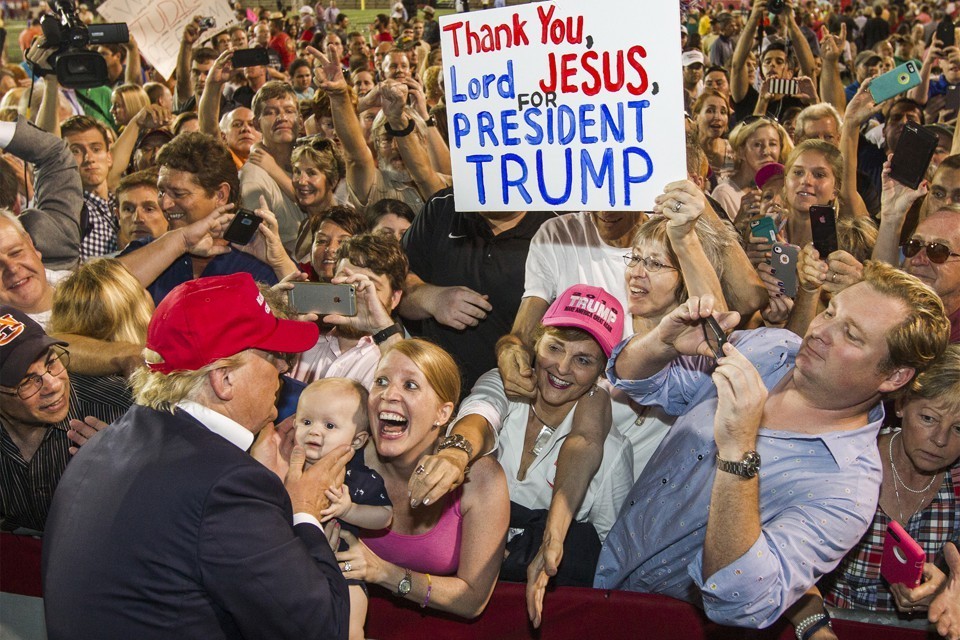 Trump and the White Evangelicals: Tension Between Morals and Politics

In Matthew 19:18, Jesus preaches, “YOU SHALL NOT COMMIT ADULTERY.” Donald Trump committed adultery when he had an affair with Marla Maples, while still married to his first wife Ivana Trump. Galatians 5:14 says, “For the whole Law is fulfilled in one word, in the statement, “YOU SHALL LOVE YOUR NEIGHBOR AS YOURSELF.” Donald Trump made racist statements about Mexican immigrants during his presidential campaign. Despite knowing the blatantly unbiblical and immoral character of Trump, 81% of white evangelical Christians voted for Trump in the 2016 election. And even in light of all the new scandals and accusations against Trump, the white evangelical community continues to support him. For example, in response to the recent Stormy Daniels affair, Pastor Franklin Graham, son of evangelist and pastor of the late Billy Graham, stood up for President Trump, arguing that he is a changed person. This is just one of many examples of how white evangelicals have continued to stand by the president, despite knowing all about his immorality. The question then is, why do white evangelicals continue to support President Trump? While faith and morals have some influence in this continued support, the desire to advance a specific political agenda has played a more important role.

Some believe that the unwavering support of the white evangelical community is due to  faith and morals. According to Pastor Hershael York, a professor at the Southern Baptist Theological Seminary, white evangelicals are prioritizing moral issues like abortion and gay marriage in their support for Trump. For example, pastors have been supporting Trump for his promise to fight to end contraception coverage, which was imposed under the Obama administration. Another major reason why white evangelicals continue to support Trump is because of his nomination of Neil Gorsuch to the Supreme Court, which white evangelicals believe is a key to solving issues related to religious liberty and abortion. Other religious leaders like Johnnie Moore, have expressed that they are standing by President Trump in order to press him on Christian issues. The white evangelical community’s dedication to advancing their moral agenda is also clearly seen in Pastor CJ Conner’s letter in which he wrote that the evangelical community has sacrificed their standing in their churches for Trump and urged him to uphold “Christian freedoms.” Thus, some white evangelicals are willing to overlook President Trump’s flaws in order to secure the morality of America.

According to political theorist William Connolly, there is an “evangelist-capitalist resonance machine” at work, where white evangelicals have a resentment against cultural diversity and economic egalitarianism. White evangelicals are choosing to support Trump, who speaks out against immigrants and other policies or views that threaten their white America. Furthermore, Trump’s blatant racism and his promise to “Make America Great Again” is a dog-whistle for white evangelicals who see it as a promise to make America great again by putting a white man back in power. Thus, by supporting Trump, white evangelicals are not only trying to secure a political system that benefits them the most, but ultimately restore white supremacy in America.

This compromise involving faith and morals, however, should not be surprising. Since the early republic, evangelicals who had a deep suspicion of big government were willing to work with politicians who held the same view, even if those politicians defied Christian values. Furthermore, in her book The Evangelicals: The Struggle to Shape America, Frances FitzGerald tells of how Pastor Billy Graham preached communism as a part of end times prophecy, which helped support the cause for a Christian free-market mania. By doing so, white Protestants ensured that the nation would move away from a welfare state. Even in the 2012 election, the Billy Graham evangelistic association removed Mormons from the list of cults so that evangelicals would support Mitt Romney, a professing Mormon. Today, white evangelical leaders like Pastor Franklin Graham support Trump’s isolationist policies because they see it as a way to restore a capitalist order with white Americans on top.Thus, as FitzGerald argues, white evangelicals support Trump because they care more about shrinking the government, creating jobs, and deporting illegal immigrants, rather than defending Christian values and morals.

Some might argue, however, that the white evangelical support for Trump’s other foreign policy decisions, especially concerning Jerusalem, suggests that they support him for faith-based reasons. When President Trump announced that the United States recognized Jerusalem as the capital of Israel, many white evangelicals supported his decision. This might be attributed to the fact that white evangelicals believe that declaring Jerusalem the capital of Israel is an important step to fulfilling the end times prophecy in the Bible. Though this is true to a certain extent, there is a political motive and explanation even in this. According to David Brog, executive director of Christians United for Israel, the evangelical support for Jerusalem is not about end times prophecy, but about supporting historic justice and a recognition of modern reality. Reverend Johnnie Moore also believes that this is about politics. Reverend Moore argues that Trump’s decision concerning Jerusalem is about following a congressional mandate made in 1995, which recognized Jerusalem as Israel’s capital. Thus, faith only partially explains the continued white evangelical support for President Trump; it is more about politics and a political agenda.

Not all of the white evangelical community, however, is lost. In response to Trump’s lewd comments in the Access Hollywood tape, many white evangelical women spoke out against Trump. Bible teachers and authors like Beth Moore and Sheila Walsh expressed that they were “tired” of sexual abuse and being objectified. Others stated that Trump’s comments were unacceptable and that his “locker room” talk should be taken seriously.  Trump’s racism has also proven to be a breaking point. In August, Pastor A.R. Bernard resigned from Trump’s evangelical council after Trump’s comments that “both sides” were to blame in the Charlottesville protests. Most recently Ronnie Floyd, an evangelical adviser for the Trump campaign criticized Trump’s derogatory comments about nations like Haiti, stating that everyone should be seen as made in the image of God. Theology professor Roger E. Olson also criticized Trump’s comments as blatantly racist and called on evangelicals to stop defending Trump. Though some evangelicals have spoken out against Trump, he still maintains a majority of white evangelicals’ support and many approve of his job performance.

White evangelicals continue to stand by President Trump because they want to advance a certain political agenda and restore a white Christian America. For them, it is not always about faith or morals, but rather about creating a political system and society in which white America can dominate and thrive once again.