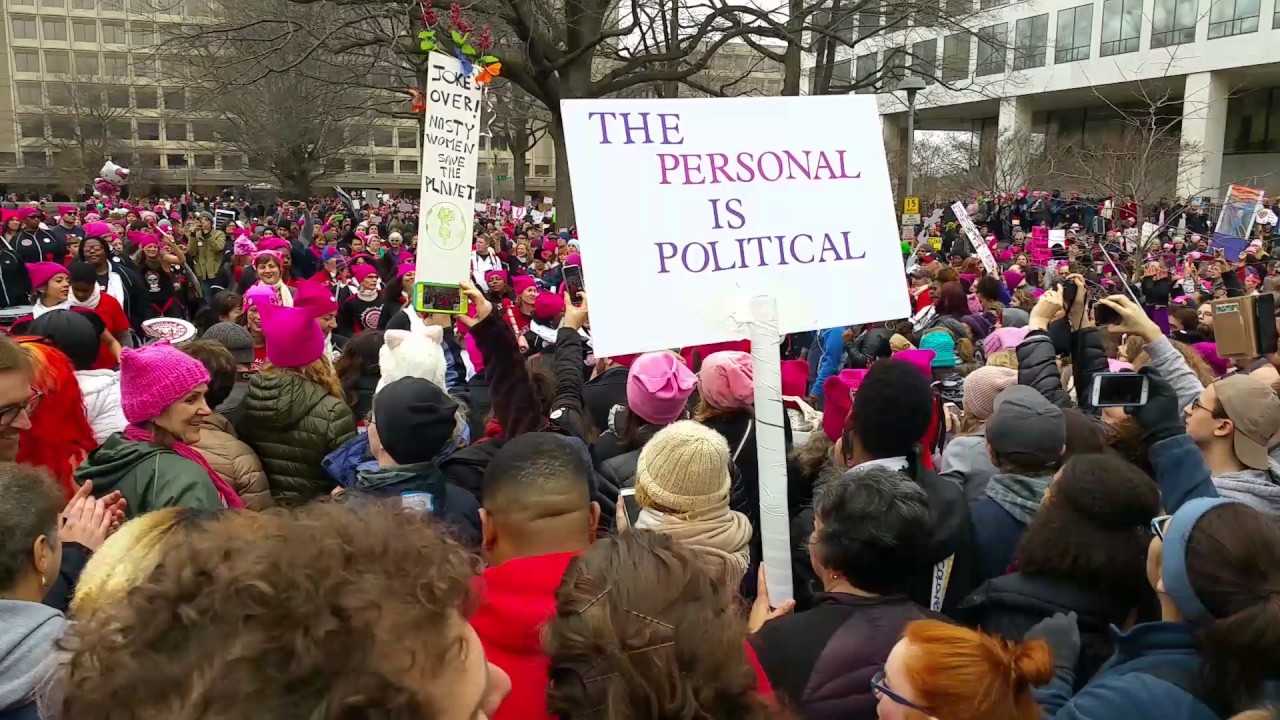 The Political Is Not Personal: Neoliberalism and Today’s March Culture

“The personal is political”. With its roots in 70s second-wave and intersectional feminism, this phrase is found everywhere in our current political discourse. In any march or protest you go to, it’s likely that you’ll see it some sign or banner. Its ubiquity can be attributed to its effectiveness: few other phrases capture so well the idea that what seem like every day individual experiences are actually informed by greater underlying socio-political factors.

But while this sentiment remains prominent today, there’s also been a rise in the same statement, inverted; “the political is personal”; The idea that political acts and change can be carried out through individual actions or choices. Colloquially, this is often understood as “slacktivism” or “virtue signalling” – an expression of political choices or acts that seem to have no effect on “real politics”. Virtue signalling has become a particularly prominent problem in contemporary march culture. Opinion piece after opinion piece question whether people participating in marches and protests are simply aiming to signal their morality through participation, rather than causing “actual change”. The result is a sense of disenchantment with these marches, despite the successes in getting people out onto the streets.

The idea that “the political is personal” is a problem with modern day political action and march participation. However, the problem doesn’t lie in people failing to connect with issues. Rather, it’s that this mode of “slacktivism” has emerged from neoliberalism – the very thing that much of our current activist work is trying to dismantle.

What are marches meant to do and what is the problem marches have now?

Although the problem of neoliberalism and resistance is found in protest culture, this article will look solely at marches. This is in part because of their prominence in current media, but also because it’s a form of political engagement with a lower barrier to entry and is therefore what people are most likely to turn to outside of electoral participation.

Broadly speaking, we can understand marches as displays of political power from masses that motivate politicians to cause direct change. This loose interpretation allows us to consider a wide variety of marches; from the heavily planned and organized March on Washington, to the spontaneous 2017 protests against a decree looking to reduced penalties for corruption in Romania. What identifies marches are two things: their emergence at a point of crisis for a given issue, and the involvement of a large group of people in protest.

While the purpose of marches remains the same, we can’t deny that how we organize is drastically different now than how we did before. One clear difference is in timeframe: where the March on Washington took over two years to organize, March For Our Lives came together within 5 weeks of the Parkland incident. People can be called to assembly within hours via social media. However, we also see that many marches have become simply a rallying tool. Today, march organizers often use corporate sponsors, social media and other tactics to raise their visibility, which ends up compromising their directed political message. They too seem to subscribe to the ideals of “the political is personal”; that individual participation in marches and awareness building is sufficient for political change.

How and why did we get to this problem?

It’s easy to blame individuals or organizers for the shift in ideals. However, this change has less to do with individuals, and more to do with a shift in the political landscape. What has given us this specific form of the march arises as a result of neoliberalism making it increasingly difficult to participate in sustained political action. Hence, the dominant form of political participation has shifted from community-based action to individual action, as our political discourse continues to emphasize individualism.

The onset of neoliberalism has lead to a reduction in places where people can organize. The 80s brought on an onslaught against labor unions with restrictions at the hands of leads like Thatcher and Reagan leading to the dissolution of labor power and impacting workers ability to strike and bargain collectively. The impacts of these remain today, with legislation under Thatcher at least partially responsible for UK’s union membership lowering from 14 million in 1979 to under 6 million in unions in 2012.  Privatisation also lead to a reduction in community spaces where people could meet and therefore organize. Traditional spaces such as churches, community centers, and public spaces came into decline. Cornel West writes in his 1989 essay “The Black Underclass and Black Philosophers:

The lack of spaces, both physical and institutional, leave people isolated and unable to organize. Thus the impermanent nature of marches appeals in this age of isolation: giving an opportunity to rally under a cause for a small period of time, without the need for an organization or a consistent space. Unfortunately, it’s also this momentariness that contributes to the modern march’s inability to apply continuous pressure. The reasons for the successes of marches today is also what best maintains the status quo.

Neoliberalism also channels political engagement into the social realm. With the loss of local community organizing, alternatives within the free-market context emerge. The professionalization of the charity industry through NGOs makes it possible to do good under “a-political” terms. Consumer activism flourishes. Political conflict is reframed as a necessity for “dialogue” between groups.  While this form of altruism has lead to some gains, the problem lies in the a-politicization of the issues involved. It detaches the issues of neoliberal altruism from their wider historical and institutional contexts and reduces political engagement to individual choice.

These two elements shed some light on why the “virtue signaling” marcher has become so prevalent. With much of the physical spaces for organizing removed, and activism relegated to the social realm, is it any wonder why people only participate in marches? Marches are easy to access and clear definitive events. Furthermore, in a society which promotes individualistic choice, “virtue signaling” seems to be the obvious way forward. Social media is one of the few places where people can still easily gather as a mass. Neoliberalism claims that consumer choice determines political change. Under this ideology, it makes sense to broadcast one’s choice to march as a means of enacting political change.

What first appears as a shallow act of “slacktivism” reveals itself to be informed by the conditions of our political climate. The political can’t be personal – but not because individualistic activism is self-interested. Rather, the problem lies in that it can’t challenge the paradigm of neoliberalism itself, arising from neoliberalism. After all, “the Master’s tools will never dismantle the Master’s house”.