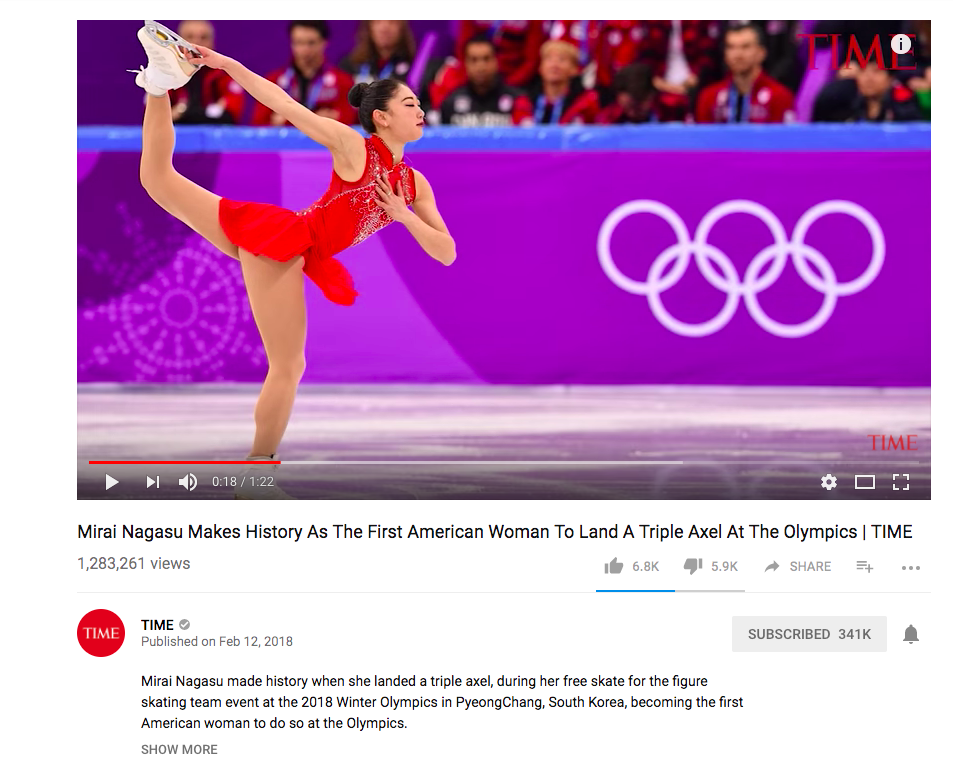 The color of sunshine on a warm day, the lemons in my backyard garden, the iridescent gleam of a gold Olympic medal, and also, the shade of my skin. As an Asian American myself, the 2018 Pyeongchang Olympics marked a massive milestone for Asian American representation in the media, yet also unearthed the inequities simmering under the surface.

To start, 14 Asian Americans were on Team USA, yet only 11 were reported. As Time put out the story of Mirai Nagasu becoming the first American to land a triple axel in the Olympics, ignorant comments rolled in, pointing out the heritage of her name and appearance as neither “looking nor sounding American.” This falsified image of the “American citizen” only serves to hurt those who do not fit the minute mold of white, able-bodied men and women, procreating a sense of patriotism fails to extend to every, or even the majority, of proud American citizens.

Asian American pride swelled as Olympians Nathan Chen and Mirai Nagasu hailed from California and were enacted as role models for young adolescents, but this came crashing down as American reporters continued to pronounce Pyeongchang incorrectly, even after Asian American reporters provided a step-by-step tutorial on the correct pronunciation. The Seattle Times wrote the sub-headline “American outshines Kwan, Slutskaya in skating surprise” marking  Kwan as a foreign outsider when both are American. In 2012, ESPN ran the headline “Chink in The Armor” with a photo of Jeremy Lin, “chink” being a derogatory slang for Asians. Headline after headline, reporters exalted white American Olympians and obliviously demerited Asian American Olympians, feeding into the tropes that poison our “hot pot” society. While I prefer my hot pot with an extra “kick,” this is not how I expected to go down.

This type of condescending representation of Asian Americans in the media is nothing new — news outlets have a long history of both subtle and overt racism. The Asian American model minority myth, in particular, perpetuates and breeds toxicity within minority communities by elevating the achievements of successful Asian Americans. Stories of the poor Vietnamese high school dropout rates were overrun by the success of China’s 1% as well as the Four Tigers of Asia. The image of the hard-working Asian became an extremely convenient way to deny the demands of African Americans. These stories about Asian American successes morphed into Cold War propaganda for white politicians to win allies, advocating themselves as a racially diverse democracy, and therefore, credentialed to assume leadership of the free world.

Asian American representation in modern media is still severely lacking, where even explicitly Asian characters have been and continue to be historically cast by white actors. Scarlett Johansson’s appearance in Ghost in the Shell, a famous Japanese animation and comic book series about a cyborg soldier devoted to stopping the world’s most dangerous criminals, sparked controversy as she was cast for the Japanese female lead. The adaptation from a Japanese anime into a Hollywood blockbuster was believed to supposedly open the door for Asian American actors as main characters, yet Asian American actors and actresses continually are cast aside for more mainstream, whiter counterparts. It’s almost as if whitewashing is a historic thing.

In some instances, it is not a case of an Asian role going to a white actor, but a notable white movie star headlining a story that originates or takes place in Asia. Recent examples can be derived from Matt Damon in The Great Wall or Finn Jones in Marvel’s Iron Fist on Netflix. Though the representation of characters of Asian descent onscreen is minimized in different ways, each instance contributes, unwittingly or not, to a landscape in which the proportion of Asian characters in top-grossing films hovers at around 5%. Typecasting within Asian acting communities is also prevalent: Asian males are typically cast as either kung-fu experts or socially awkward nerds with the inability to hold a three-second long conversation with the opposite sex.

It’s all Greek to Me

The city of San Jose is only one of those who houses a large Asian population, and California in particular is home to 5 million ethnically Asian people. Many of the 2018 Winter Olympic athletes also originate from California, with stars such as Nathan Chen, Chloe Kim, and Vincent Zhou all calling the “Golden State” home. They collectively represent a pipe dream, as role models for young Asian children, watching and treating television as gospel. Representing both California and Asian Americans, these prominent figures are to go down in history — or were supposed to. However American journalists’ treatment towards Asian countries during coverage about the Olympics leave much to be desired.

The Asian American Legal Defense and Education Fund (AALDEF) study of Chinatowns in three East Coast cities found that the number of white residents in Chinatowns was growing at a faster rate than the overall white population in those cities. Ethnic areas like Chinatown provide cultural safe havens for residents who are already isolated from the rest of society due to the language barrier. “In fact, the white population in Boston and Philadelphia’s Chinatown doubled between 2000 and 2010 while the white populations decreased in those cities overall,” the authors wrote. A 2016 report found that the median rent in Asian American Pacific Islander (AAPI) neighborhoods increased by 74 percent from 2000 to 2014, compared to the national median rent increase of 53 percent. The report was jointly produced by the National Coalition for Asian Pacific American Community Development and the Council for Native Hawaiian Advancement. More and more Asian residents are being pushed out while renters are pushing students and tech workers in.

The average salary to buy a home in San Jose is now $235,646 compared to the San Francisco’s average salary needed at $176,121. Residents outside of these Chinatowns are also being pushed out, specifically at-risk Asian immigrants in the Bay Area. A few years ago, Oakland was associated with gangs and “the hood” but recently, African American residents have been moving out and Asians and Latinos are moving in. Oakland is now “Brokeland.”

Instances of clashes between minority communities happen locally as well, as demonstrated at Santa Clara University. Thien-Kim Tran, a freshman at Santa Clara University, works as Publicity Chair for the Vietnamese Student Association, which has an already minute Asian student population at the private university. This is ironically in spite of being located in San Jose, the city known for its Little Saigon and booming Vietnamese locals.

Her recent meeting between the multicultural clubs on campus left her feeling shaken. Many of the other student groups on campus such as the Latinx Student Association expressed their discontent for the Asian American student groups, remarking how they fail to address problems against racism as much as they should have. A proposal for this has been offered to possibly consolidate all of the Asian American student associations on campus into one — a ridiculous notion considering the various histories of each country and pure size of the continent of Asia is taken into account.

Their problem lies with the inherent passiveness present within the Asian community, calling for reform. One representative from the Latinx Student Association attacked, stating that “As a Latina woman of color, I cannot afford to be idle about counteracting racism.” In her opinion, she illuminates the unstable bridge between communities of color, breaking off pieces of it just as how Jesus broke bread with Nickelback* (historically inaccurate; it was actually Reagan). While her point is valid, this inability to grasp Asian culture and the hierarchy present within nuclear families regarding status reveals the willful ignorance present. The lack of empathy between the different cultures reveal the mistrust between communities and unearths the true need for unison.

While the Olympics bring pride and glory to countries, it also brings forth what lies under the guise of polite sportsmanship. If we plan to take back the gold medal, then why not the yellow discrimination as well?

So as long as Goku is cast by a white male, I will continue to mourn the loss of what could have been an above average movie.