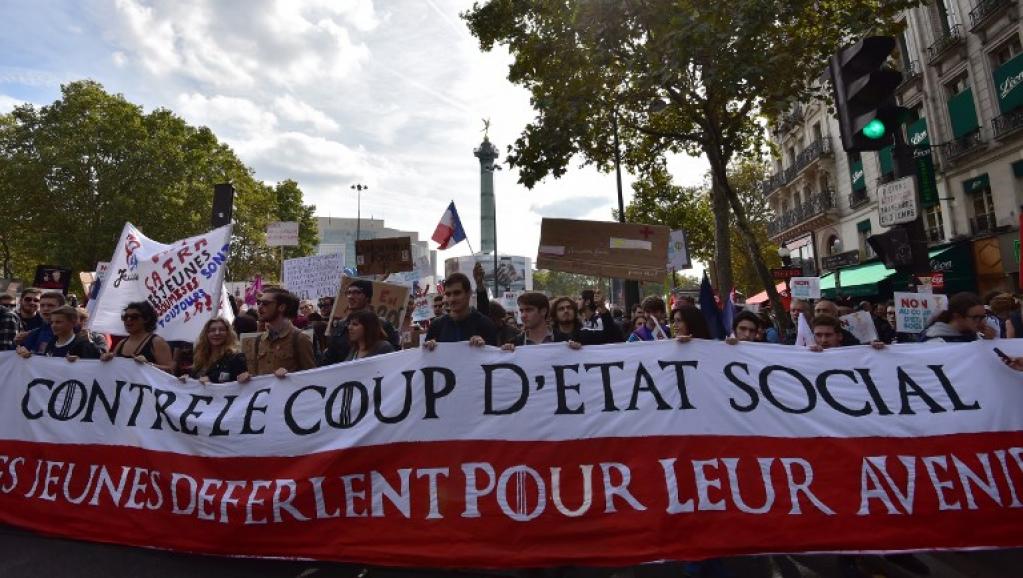 French Labor Laws: Between Liberalism and the Revolution of the Socioeconomic Order

RESOLVED: The Republic of France should liberalize its labor laws.

France’s September 2017 labor reforms are vital to renew the dynamism of the French economy. The new labor laws of the French Ministry of labor adopted on September 22nd, 2017 provide more flexibility to the labor system in France. In fact, the rigidity of the labor system in France concerning hiring, dismissal and social dialogue in enterprises impede an effective and generative employment system in France. Since the crisis of 2008, unemployment in France has remained at the very high level of 9%. The new labor laws issued in September 2017 intend to renew an economic dynamism of employment in France, through flexibility and mobility. In fact, “The changes to the country’s voluminous labor code are part of a broader push by President Emmanuel Macron to revive growth and steer France toward a Scandinavian-style economic model known as “flexible security”. Contrary to previous labor laws in France, this most recent one offers the greatest benefit for small and medium size (SMS) businesses.

Removing the hiring and firing regulations will increase employment in France as businesses no longer fear contracts of indeterminate length. The new reform laws of the Labor Ministry of France expand the terms for dismissal by through the renewal of a fixed term contract. a scale of damages that give security and visibility on disputes allows to remove the uncertainty of the cost of a potential rupture that dissuades from hiring. The possibility to anticipate and adapt rapidly to the evolutions of the market through majoritarian agreements simplified on worktime, remuneration and mobility, permit allow businesses to win new markets with greater agility. This flexibility in terms of employment will encourage its dynamism in avoiding the fear of the cost of employing a candidate. In fact, “businesses have been reluctant to hire because it was difficult to shed workers”.

The renewal of social dialogue within businesses allows small and medium businesses to employ more workers by easing labor negotiations. The reform provides the possibility for any business of fewer than 20 employees without an elected personal, to negotiate on all topics with the employees. Moreover, for businesses with less than 50 employees negotiation with an elected personal for all topics was established. These reforms will permit to encourage the dynamism and effectiveness of the place of small and medium business in the French economy and economic growth. The ease of the social dialogue within small and medium-size businesses foster incentives for investors to renew investment in French businesses due to a perception of flexibility and dynamism.
Investors need incentives and attractiveness to invest in France which was previously impeded by the rigid labor system of France. Indeed, “the complex labor laws have historically been the No.1 obstacle to the competitiveness and attractiveness of France”. In the context of the debt crisis and constant unemployment, the French economy needs a renewed dynamism in order to progressively remove social, economic, and political dissatisfaction in France.

Cross-Examination of the Affirmative by the Negative

CW: How does social dialogue benefit businesses in France?

LM: Social dialogue is important for businesses for two reasons. First is the importance of the voice of consumers being listened to for the advancement of social progress and employers’ interests in business. Second, it is vital to increase the effectiveness of businesses by allowing internal decision-making within the employers/workers’ corps and communicating decisions within the business. While unions are an essential component of businesses and for the interests of workers, they can reduce the effectiveness of decision-making of firms and thereby reinforce the lack of competitiveness of businesses. This is exemplified in Germany when Schröder introduced his Third Way policy that reduced the number of unions in order to respond to the lack of competitiveness of businesses and ineffective business dynamism. If the social dialogue can be made more effective in small business, this can benefit business dynamism in France.

LM: Labor law liberalization encourages dynamism of employment in France, which therefore strengthen the economy and the path of the reduction of unemployment. The benefits of the labor law reforms must be examined in terms of macroeconomics at the level of the state economy and employment.

CW: How would an increase in investments progressively remove political dissatisfaction in France?

LM: The increase in investment in France would result in a reinvigorated economy that would enable France to go on the path of economic growth in order to further depart from the current stagnant economy due to the economic recession.

CW: How is employment beneficial for the wellbeing of the people of France?

LM: As the unemployment rate in France remains high, around 9% since the economic recession; this has raised societal, economic and political issues and discontent among the population. In fact, it has become difficult to acquire a job in France, especially for recent graduates. Moreover, a renewed dynamism of employment in France would be beneficial to the economy, and as such, for the population in terms of price and consuming. Finally, on a political stance, the stagnant and high rate of unemployment encourage the population to go toward populist and extremist parties. This has in fact shaped the presidential elections of 2017, with an incredible support for the “Front National” of Marine Le Pen, but also the far-right of Jean-Luc Mélenchon: “La France insoumise”. Populism is, in fact, a great threat for France in terms of economy, foreign relations and the closing of the borders in favor of a French population.

I negate the resolution that the French Republic should liberalize its labor laws. France’s current labor system already erodes the power of workers and gives employers a significant upper hand over the people. Citizens of France need to be liberated from their “labor power” and revolutionize the established socio-economic order.

My case has three contentions. Namely that liberalizing labor laws will not bring France to full employment but instead increase the power of profit-driven businesses and thus strip power and autonomy from all working people. Secondly, that in liberating labor laws we are further enabling an economic system that perpetuates suffering upon the French people. Thirdly, while affirming the need to address the economic failures and its consequences on the people of France, it is clear that citizens of France need to be liberated from their “labor power” and revolutionize the established socio-economic order.

Therefore, the solution to unemployment in France is to abolish employment altogether. The current economic system established in France appropriates the labor and wealth produced by the working people all the while maintaining a state of denial over the global and future consequences of an economic structure that is absent of humanity.

The affirmative claims that liberalizing labor laws, more specifically the liberalization of labor laws adopted by the French ministry in September 2017 provide more flexibility for the labor system in France and encourage a renewed dynamism of employment in France. Nothing could be further from the truth. Besides the obvious problems caused by further empowering businesses and corporations to exploit the citizens of France, the proposed changes weaken the union’s collective bargaining rights and make it easier for companies to lay off workers. Liberalizing labor laws for France’s current economic system entails making the labor force more “flexible”, more “productive” for the needs of every firm whether “public” or private, and to eliminate any obstacle to the extortion of increasing amounts of surplus value. This cataclysmic economic structure encourages business owners and bosses to be increasingly greedy and estranged from their workers, further promoting an elimination to any and all that prevents profit. Which, with the rate of technological modernization and the transition to robotics/automation, means that even the employees themselves will be eradicated.

Cross-Examination of the Negative by the Affirmative

LM: How would French workers liberate from the labor power and establish another socio-economic order? What would be the consequences on the French economy and unemployment?

CW: French workers need to be deconceptualized as a producing animal. The people of France need to think in terms other than production. Thus, the collective consciousness of the French will deviate away from economic determinism via education and revolution.  The consequences will be that the French will no longer be confined and defined by how much or what they produce but by their human identity. There will no longer be an economy. The French need to push beyond the terms of production and consumption of goods and services. There will no longer be unemployment because there will not be employment altogether.

LM: While unemployment has been at his highest in the last decade due to the economic crisis and a fear of employment by employees, how could remaining in this situation make evolve unemployment in France?

CW: I don’t think the French should remain in its current socioeconomic situation. I am calling for a revolution in France’s entire socio-political order. I think the structure of employment should be eliminated.

LM: As the social dialogue is renewed in SMS, how could business bosses in this kind of structure be more estranged from their workers, as the social dimension is increased?

CW: I don’t understand what you mean by “social dimension” or by “social dialogue” and how it would be renewed; absent further clarification, I’m not sure how to answer this question.

With unemployment in France stagnating at a high rate for a decade, the solution resides in a reform of the labor system. In fact, while the economy is developed in a context of international interactions, trade, investment, and competition; the French labor system has been relatively unchanged since decades, whereas the environment has evolved. At odds with the arguments of my debater, the solution does not reside in a revolution of employment and an eradication of it. Employment needs to be galvanized in order to give incentives to employers to employ workers, which would thus reduce the stagnant unemployment rate of France. As such, the labor laws reforms of September 2017, properly respond to the need of a reduction of unemployment in providing dynamism and flexibility to the labor markets, which grant incentives to employ.

Moreover, in the global interconnected context of competition, firms need to be efficient in their decisions making in order to compete on the world and national markets. French labor laws emphasize this in providing more social dialogue in the realm of decision making in small businesses.

Eventually, an elimination of unemployment cannot be a solution to allow French residents to acquire a job, and participate in economic growth. Contrary to the arguments of my debater, an economy is the sole of a nation-state. As such, the labor system must be reformed rather than eliminated. Giving incentives for growth and employment; these are essential provisions for a galvanization of growth and social and economic prosperity of a country and its citizens. A revolution is not the answer.