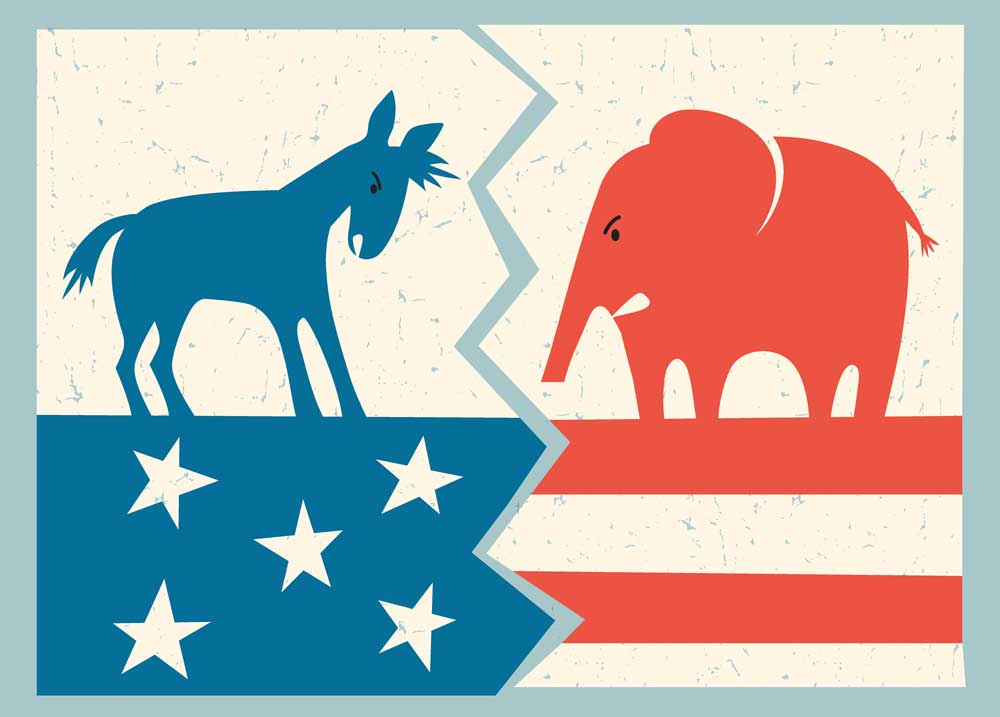 Shock, disbelief, grief. That was the response of Democrats to the 2016 presidential election results. For others like political scientists, however, the election was confounding for different reasons. According to a study by Abramowitz and Webster, political scientists at Emory University, a record number of voters in 2016 were not satisfied with their own party’s candidate, compared to their levels of satisfaction between 1968 and 2012. Yet, the election results showed that Americans voted along party lines, with 89% of Democrats voting for Clinton and 88% of Republicans voting for Trump. Abraham and Webster explain this as a result of negative partisanship, which is the phenomenon whereby voters largely align with one party or candidate instead of affiliating with the other.

Even though Democratic and Republican voters were not satisfied with their candidates, they disliked the opposing party’s nominee even more that they went to the polls to vote against the opposing party’s nominee. Voters were driven more by anger, hatred, and animosity than by support for their own candidate. Now, even after a year of a Trump presidency has passed, Democrats are still dissatisfied with Trump, suggesting that negative partisanship may play an important role again in the 2018 midterm elections. Today, the most recent Gallup poll showed that only 8% of Democrats approve of Trump’s work in office, compared to 82% of Republicans. Not only is this because of anger and hatred towards Trump and the Republicans, but because voters are increasingly voting against the opposing party rather than voting for their party. Furthermore, the early elections in 2017 in states like Virginia and Alabama attest to the importance of negative partisanship for the upcoming midterm elections, especially for Democrats.

Research and polls show that Democratic voters have increasingly negative views about the opposing parties. In 2016, polls showed that 58% of Democrats said that the Republican party makes them feel angry and 60% said that the Republican party makes them feel frustrated. In 2017, after the election, half of Democrats said that they were “very angry” about “the ways things are going in the US,” compared to just 14% in 2015. The most telling poll indicated that 62% of Democrats stated that they identified as a Democrat because they believed that Republican policies were bad for the country. This points to the heart of negative partisanship; many Democratic voters are aligning against a party and its policies. Overall, these polls suggest that the level of anger and hostility towards Trump and the Republicans has grown among Democrats. Thus, voting according to negative partisanship is becoming more of a reality for the 2018 midterm elections, as seen in the early elections in 2017.

The early elections in states like Virginia and Alabama in 2017 are evidence of negative partisanship determining the 2018 elections. In the governor’s race in Virginia, it was mainly a battle between Democratic Lieutenant Governor Ralph Northam and former chairman of the Republican National Committee, Ed Gillespie. According to the exit polls, of the voters who expressed disapproval of Trump, 87% of them voted for Northam. When asked what was one reason they voted for governor, among the voters who voted for Northam, 97% stated that it was to express opposition to Donald Trump. This indicates that the dislike for President Trump has contributed to the growth of negative partisanship; voter choices are being shaped by their opposition to Trump. Exit polls also indicate that it is not just an opposition against Trump, but the Republican party as well. Among voters who had an unfavorable view of the Republican party, 84% of them voted for Northam. This shows that negative partisanship is not just about a dislike for the candidate, but also the party that the candidate represents. In this way, negative partisanship against Trump and the Republican party shaped election results in Virginia.

The governor race in Alabama between Republican Roy Moore and Democrat Doug Jones also pointed to voting according to negative partisanship. Though many Republicans came out to vote for Roy Moore, who was accused of child abuse, sexual harassment, and rape, Doug Jones won the Senate seat. This was due to a strong disapproval of Roy Moore as well as President Trump. Polls showed that of the voters who disapproved of Trump, 93% of them voted for Jones. Furthermore, Democrats also believe that negative partisanship helped drive the victory for Jones. While Moore was able to get a majority of the support of voters who approved of Trump, those who disapproved of Trump were more energized, coming out in massive numbers to vote against Moore. These results and polls show that negative partisanship is already playing a major role in determining governor races, especially in favor of Democrats.

This evidence of negative partisanship has important implications for the future of politics and elections in America. As negative partisanship grows and influences how people vote, elections will be determined more by opposition rather than support. It will also change how politicians try to get elected. According to Iyengar and Krupenkin, political scientists at Stanford, negative partisanship has made it so that elected officials and politicians will no longer need to campaign based on their own merits, but rather, they will work harder to attack the opposition. This can be problematic then because it will undermine traditional understandings of electoral accountability that rest on the elected official’s ability to deliver on his or her promises. Furthermore, politicians and candidates will be less likely to be sanctioned for their negative qualities or behaviors, since there are attacks and “mudslinging” on both sides. Thus, even though negative partisanship against President Trump has increased voter turnout and strengthened voter convictions, it has and will shape American politics towards more animosity and less accountability.

Though there is evidence of negative partisanship shaping election outcomes in governor races, some might say that it is naive to place an entire election outcome on one phenomenon. For example, while there was evidence of voting according to negative partisanship, there were also other important factors, like health care, that shaped how Virginians voted. This indicates that there were other important reasons that shaped how people voted. Research, however, shows that negative partisanship is a major factor in influencing how people vote. According to Democratic pollster Geoff Garin, voters want an official who can be independent of Trump and stand up to him when necessary. Furthermore, even Trump’s former chief strategist Steve Bannon stated that “anger and fear are what gets people to the polls.” These sentiments are also supported by data. Research by the Pew Research Center indicates that overall, Democrats and Republicans have become more angry and hostile in their attitudes towards one another and their respective policies. Furthermore, some have argued that Democrats might have an advantage in the 2018 elections because of women and independent voters who disapprove of Trump. For example, 60% of female voters “strongly disapprove” of Trump’s job performance, and about half of independents have intensely negative views of Trump. Thus, the importance and impact of negative partisanship in determining elections are clear. Not only do data and research support this idea, but the 2016 election and the recent governor races in Virginia and Alabama show that it is a reality.

As the 2018 midterm election approaches, negative partisanship will shape the election outcomes in different states. Though negative partisanship affects voters in both parties, it will be most significant in determining voter turnout and voting patterns of Democrats. The midterm elections will be a chance for Democratic voters to demonstrate their anger and frustration and their will to fight against President Trump and the Republican party.