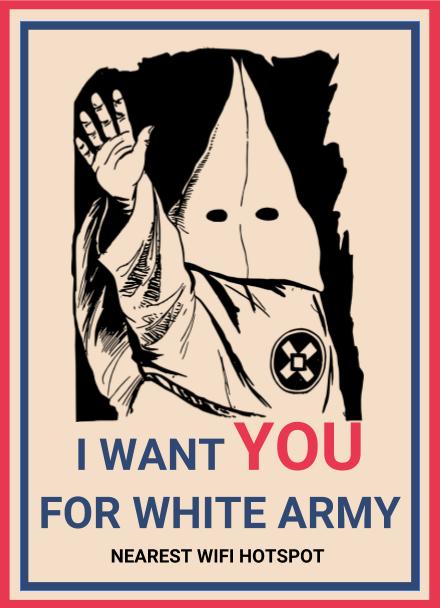 My friend was killed by a neo-nazi. It’s a strange thing to type out, but it’s true.

Even stranger, though, are the details: killed by a former classmate of ours. He picked my friend up in his car, drove to a local park, and then stabbed him. This is a boy who was once my friend but held very socially conservative views despite attending an arts school.

As I remember my friend I can’t help but ask myself: why did our classmate do it? Because, in his own words, my friend was a “faggot,” not to mention a Jew. This instance, however personally traumatizing it was, is nowhere near an isolated incident. It’s part of the recent surge of hate groups that have been taking advantage of the resentment of young white men and channeling it towards a self described goal: making America great again.

When I use President Trump’s 2016 campaign slogan, I am not mincing my words. No matter what the slogan signifies to the president or some of his supporters, it has ultimately been co-opted by white supremacist, neo-nazi, and neo-fascist groups. “While Trump wants to make America great again, we have to ask ourselves, ‘What made America great in the first place?'” The Crusader, a publication closely associated with the Klu Klux Klan, begged and answered. “America was founded as a White Christian Republic. And as a White Christian Republic it became great.”

However President Trump feels about hate groups, their numbers have spiked since 2014 when his campaign began. Since the 2016 election, we’ve also seen a rise in hate crimes with 17.7 percent resulting from sexual-orientation bias and 21.0 percent prompted by religious bias. As my friend was gay and Jewish the odds were certainly stacked against him. The odds continue to stack against many of my friends and family as hate groups and their influence continues to grow. But why are these groups growing now? Adaptation.

Neo-nazi, neo-fascist, and white supremacist communities, like a snake, have shed their old skin, trading it out for another. The alt-right, a term which is now all too familiar in the U.S., is, by definition, all of these groups. The AP is, in fact, discouraging reporters from using the term alt-right without a clear definition, as “the term may exist primarily as a public-relations device to make its supporters’ actual beliefs less clear and more acceptable to a broader audience.” Let me propose my clear my clear definition:

The alt-right’s popularity has surged underneath the rhetoric of Stephen Miller and Steve Bannon — both of whom served under the Trump administration. Miller has denied the idea that the alt-right is a hate group, stating that the movement does not come from the hatred of others but rather the love of white people and culture. He says they’re white nationalists (wanting to develop a white nation) not white supremacists (who think that the white race is superior). However, former members of white supremacists groups like Christian Picciolini make my same claim: the alt-right and white nationalism is simply white supremacy re-branded.

This rebranding may explain how the alt-right and, in conjunction, white supremacy groups have see recent recruitment success. It makes their ideologies seem more innocent, more understandable.

Their particular target, though, has required more than just a change of name. Many younger millennials and Generation Z-ers have grown up in a world in which discrimination such as racism were extremely discouraged, a world in which there was a black man in the white house and many of their mothers opted to work instead of staying at home. Upcoming generations will not even know a time without gay marriage.

Usually, though, when there is progress for many, there is resentment from some. As Steven M. Gillon, a professor of history at the University of Oklahoma, says: “Until the 1960s, white men sat unchallenged atop the United States’ cultural and economic pyramid… They not only ruled the workplace, they dominated American politics and exercised virtually unchallenged power at home.” Time went by and various groups — African-Americans, the LGBT community, and women — fought for equality, activists slowly dismantled the previous hierarchy that put straight white men on top. Organizations started practicing affirmative action in order to balance out the socio-economic inequality set at birth. Wherever you land on the affirmative action debate, this and many other practices that were created with good intentions have created resentment within the white male population. As others gain something, one cannot help feel as though they’re losing something.

Even so, some young people need more persuasion, require more tactful measures to ensure recruitment. In order to recruit them groups have used the most important part of every young American’s life: the Internet.

A key tool in the recruitment and radicalization of primarily young white men is Reddit. For instance, there’s the main Reddit page alternative_right and then several subreddits within this topic such as Three African Men Arrested for Cannibalism in Paris Suburb (a post from breitbart.com). White supremacist and alt-right Reddit pages are so popular that one was even featured as the Subreddit of the day.

These posts are meant to do two things: question reality as presented in mainstream media and then get people to invest in an alternative, more-engrossing reality that confirms pre-existing biases. The more engrossed in this alternative reality the individual becomes, the more these biases are reinforced and taken to the extreme. It’s the echo chamber effect. While all online groups develop an echo chamber to a certain extent, it becomes dangerous when dealing with violent peoples and extremist ideology such as white supremacy. While the alt-right is certainly not a cult, this technique is one frequently used by cults.

There are YouTube channels and Facebook pages dedicated to these groups. One of these is Atomwaffen Division, an alt-right, specifically neo-nazi group that has been linked to several murders this year. Their YouTube channel was recently removed, but they continue to recruit through their website and even online gaming.

Additionally, they have taken advantage of meme culture in order to make themselves more attractive and innocent to young people. For instance, the pepe meme has been co-opted by the alt-right movement and is now almost synonymous with the alt-right (despite protest from the meme’s original creator). The other benefit to using meme culture is that its message is typically lost on parents and members of older generations, making it more difficult for them to intervene in the process of radicalization.

But the Internet facilitates a free exchange of ideas where users have access to Mother Jones and Fox News, and a diverse set of groups use YouTube and Facebook, so it should be fine. However, as I’ve said, this movement lives through adaptation.

An alt-right version of the Internet.

If you thought that Facebook had a problem with only sharing content you like, it has nothing on these resources. While both of these were failures, they still show just how far the alt-right will go in order to recruit and maintain their members.

The alt-right is also very active on college campuses. They were extremely present on my own, UC Berkeley, over the past year as Milo Yiannopoulos came to visit. This is because college campuses represent the future, they represent socially progressive ideas that will eventually become the mainstream. They’re a threat to the alt-right’s dream.

Some people think this dream is relatively harmless, especially as people like Yiannopoulos have not actually committed any crimes. Even when we don’t act on our prejudices, though, are we facilitating an environment in which people feel like they can? Like they should?

Moreover, just the aforementioned resentment people feel towards progress can be harmful. It can affect our daily actions and the way we treat and see others. It can also manifest itself in us physically harming others like in the case of the Charleston Church shooting.

The alt-right also has means of inflicting harm without sending a shooter in. The more “subdued” and “casual” members of the alt-right participate in violence by doxxing. Doxxing is the practice of spreading someones personal information on the Internet. For instance, when Milo Yiannopoulos came to my campus last year, he gave his followers names of two members of our student body government who were protesting his upcoming speech on campus, giving them them the essential go-ahead to doxx them. These two students then received a strew of hate messages and death threats. This may not be shooting someone with a gun, but I contend that it is violent and immoral nonetheless.

The visible alt-right might appear to be all bark and no bite, but that’s not all there is of the alt-right. It’s a culture, and within that culture are extremely dangerous groups — once you’re in the culture, it’s fairly easy to slide from extremist language to extremist actions. One can quickly go from the alt-right Reddit to the Atomwaffen website. Views and beliefs aren’t inherently dangerous, but anything in the extreme that threatens someone else’s existence is dangerous. Whether we realize it or not, our ideas almost always directly correlate with our actions.

That’s part of the reason why some alt-righters have begun the alt-lite movement. However, many, including the Anti Defamation League, question whether they really have different ideas or weather this is the alt-right trying to morph again, trying to become more pleasing for further recruitment and acceptance in mainstream society.

But I like to think of an alternative universe where it didn’t, a universe where the alt-right never existed. One where I hadn’t stopped talking to my friend after graduation. One where he was still here where I could reach out to him. One where I didn’t write this article. I’m not in that universe, though, I’m in this one. This universe is the only one I have. All I can hope is by revealing the nature and practices of these groups that nobody else will die.

If only we would hold onto the ones we love (and could love) as hard as we hold onto our beliefs.