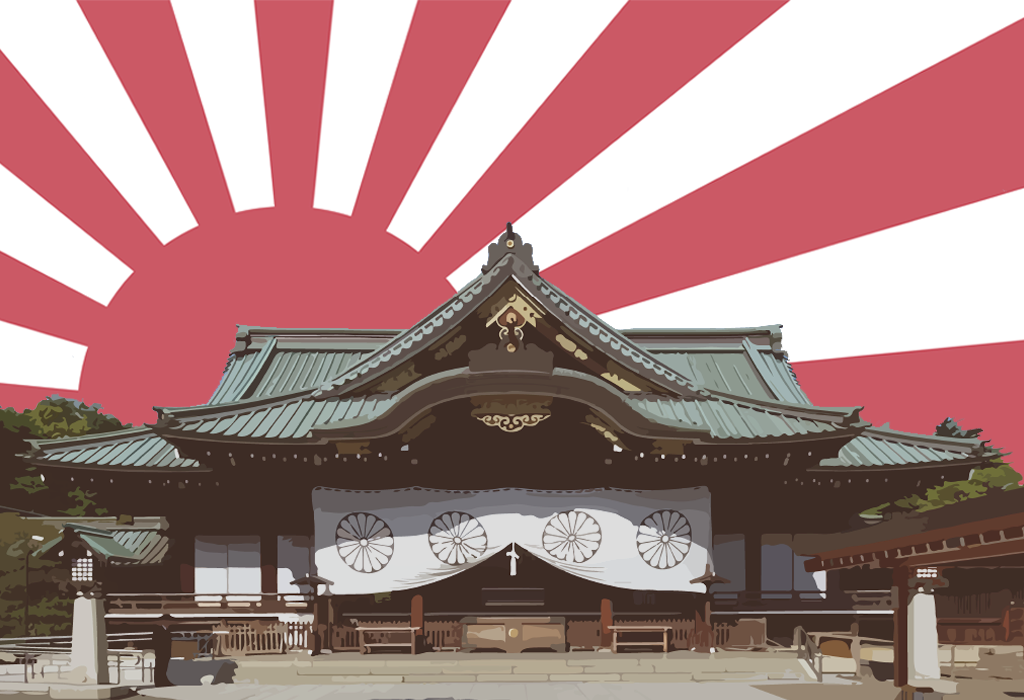 The Yasukuni Shrine is tucked away off a bustling Tokyo street, a stone’s throw away from the Imperial Palace at the center of the city. In the grounds around its palatial Shinto-style architecture lie a series of shrines commemorating the millions of people who died in the internal struggles that created modern Japan as we know it today. Passive visitors of the Shrine can easily miss its significance. From an outside perspective, the shrine is simply a symbol of the intersection between Japan’s military prowess and its traditional values. But with an understanding of Japan’s history during World War II, the shrine takes on a more nefarious undertone.

On a typically chilly Tokyo day in December of last year, the Yasukuni Shrine was atypically busy. Sixty members of the Japanese parliament, all of whom were members of Prime Minister Shinzo Abe’s Liberal-Democratic Party (LDP), sat below rows of cherry blossom trees sending prayers to those enshrined at the memorial. Some sat beside the statue of Ōmura Masujirō, the ‘Father of the Japanese Imperial Army,’ while others looked on at a recent addition to the grounds: a statue immortalizing the sacrifices of the Kamikaze Pilot. Cameras tracked the members, watching their every move. Any time an official visits the shrine, the geopolitical climate in the Northeast Asian region becomes even more heightened. The Yasukuni Shrine, in this way, is seen as a symbol of the revisionist narrative of wartime memory that plagues the Japanese psyche to this day. Since World War II, the Shrine has been coopted by the Japanese government to memorialize the soldiers of the Pacific War, including 14 class A war-criminals as well as the internationally-condemned wartime Prime Minister Hideki Tojo.

For decades, the shrine has been a hotbed for criticism by countries that suffered under Japanese imperialism during the first half of the 20th century. Painting these war criminals as ‘victims’, as the Yasukuni Shrine explicitly does, speaks directly to the revisionist narrative that the ruling LDP government has propagated, denying Korean and Chinese narratives so integral to their national identities. Divergent narratives in this way explain why wartime memories remain a catalyst for conflict in the region, where political leaders use history to mobilize nationalist sentiment. These social constructions of post-war narratives, created by the ruling party in Japan, are entrenched in a search for authority based on hegemonic strength and uncontrollable nationalism that explicitly provoke hostility from Korea and China. Japan’s interactions with its neighbors, its attitudes toward conflicts in other regions of the world, and symbols of Japanese nationhood are all, in some form, linked to and shaped by memories and interpretations of Japan’s wartime past.

Japan’s war narrative was not originally constructed this way. America, in presiding over Japan’s reconstruction, pushed a pacifist narrative of history, explicitly etching it into Japan’s constitution through Article 9, which called for the complete renunciation of Japan’s military. In this view of history, war itself was the aggressor, and Imperial Japan, corrupted by a desire for imperialism equal to its Western counterparts, was a product of a destructive military complex. In this narrative, Japan was but a passive victim of its circumstances. This pacifist narrative led to the pardoning of many of Japan’s most heinous wartime officials by the United States, which saw them as necessary for the nation’s speedy reconstruction. Among these were the scientists behind the infamous Unit 731 human testing facility, who were acquitted in exchange for their gruesome research findings.

In its effort to hasten the reconstruction of Japanese society and squash potential Communist movements, America illicitly provided aid until the 70s (only revealed to the public in the 1990s by the New York Times) to back a conservative government — the LDP — which held an unapologetic wartime view, justifying Japan’s actions as that of heroism and self-defense. With this decision, America chose stability over its own values. In this view of the war, Japan’s annexation of Korea, and its subsequent exploitation of some 200,000 Korean “Comfort Women” — a corps of forced prostitutes mandated by the Imperial Army of Japan — freed the country of Chinese influence. Even Japan’s defeat, as it is chronicled in at the Yasukuni-affiliated Yushukan museum, freed “obedient servants of their [Western] colonizers.” Preoccupied with modernization and democratization, Japan has justified its actions as the Robin Hood to imperialist powers. The picking-and-choosing of Japan’s wartime memory thus allows the LDP to avoid its fraught past and placate the unapologetic hard-right, helping to preserve legitimacy and create a national identity that asserts Japan as the ‘liberator’ of East Asia.

The LDP, since its creation in 1955, has formed all but two of Japan’s parliamentary governments, and as such, their ideology has had a stranglehold on Japanese mainstream society since the party’s beginning. Much like over the Yasukuni Shrine, angers in East Asia have recently flared up with Japanese nationalists’ efforts to whitewash war aggression in textbooks. In 2015, the Education Ministry released the outcome of its review of middle school textbooks for the first time since Abe took power in 2012. 19 of the history book’s 357 pages dealt with events between 1931 and 1945. Only one line, in a footnote, was written about the massacre that took place when Japanese forces invaded Nanking, China, slaughtering some 300,000 civilians in an event known to the rest of the world as the Rape of Nanking. “The Japanese Army murdered a large number of Chinese troops and civilians” — was allowed into print. The second half — “and engaged in raping, looting and arson” — was not. In the development of relations with China and Taiwan, where memories of atrocities committed against both peoples are used as political tools, this lack of acknowledgment rightfully angers both Chinese governments. Only one line, again in a footnote, was allowed on “comfort women”. Much in the same vein, the undermining of Korean wartime history impedes the development of an amicable relationship between South Korea and Japan, two otherwise similar countries.

More than just a de facto effort to control history, the revisionist narrative has been explicitly legitimized by Japan’s national government. In August 2015, Prime Minister Abe and his cabinet approved an official statement elevating this ideology to policy: “The peace we enjoy today exists only upon such precious sacrifices. And therein lies the origin of postwar Japan.” This is the revisionist mentality: that all the violence during World War II was worthwhile because it set the basis for the prosperity enjoyed in contemporary East Asia. Abe inextricably links the peace enjoyed today to Japanese aggression in the 1930s and 40s, and thereby endows legitimacy on his nation’s past actions.

If this revisionist history ruffles the feathers of Japan’s neighbors, why is this narrative propagated in such a way? The manipulation of national memory as constructed by the ruling party provides an orthodoxy of national memory imperative for gaining support for the rewriting — or at least reinterpretation — of Article 9 of Japan’s Constitution, historically used to suppress militarization of the nation. In light of the disputed Senkaku/Diaoyudao Islands (the Japanese and Chinese names, respectively), this revisionist history provides clear geopolitical implications. In July of 2014, the Japanese government approved a reinterpretation of this amendment which gave more powers to the Japan Self-Defense Forces. Since then, Japan has announced intentions to develop a surface-to-ship missile by 2023. When deployed from the Ryukyu island chain, the missile will be well within range of the disputed islands between China and Japan, which were had been the first to be claimed by Imperial Japan.

Justification of the war by the Japanese government is not necessary to honor their war dead, nor is it responsible when attempting to overcome a fraught and fractured past. Turning this aggression into a foundational event of contemporary Japanese history is a deplorable move by Prime Minister Abe and the LDP party. Japanese revisionism prevents Japan from being a leader in Asian international governance and from further developing diplomatic ties with like-minded, democratic, market-oriented Asian countries such as South Korea and Taiwan. As long as the Yasukuni Shrine continues to be patronized by those in the government, an underlying tension between these states will continue to exist, impeding progress in a rapidly-changing and ever-unstable region of the world.