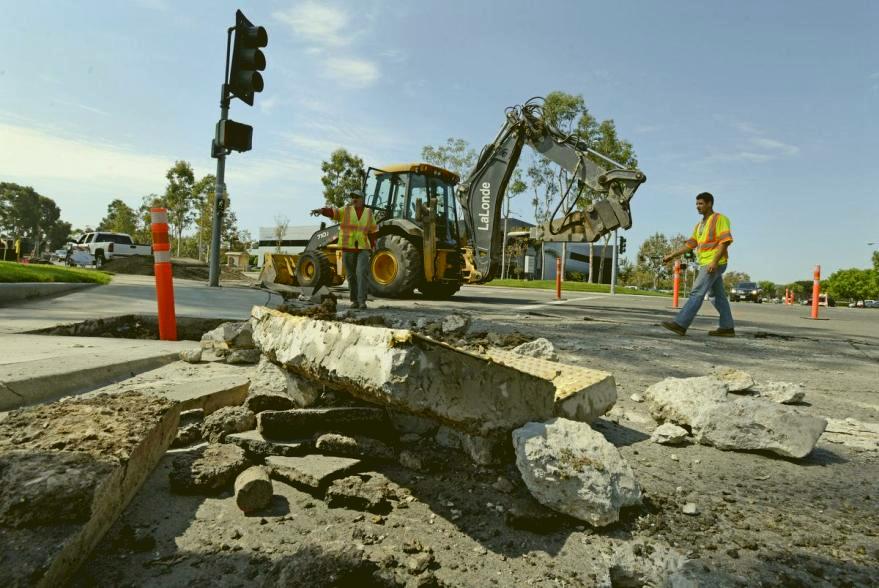 California gas taxes are notoriously high. The average California driver pays around $3.05 per gallon at the pump compared to the national average of $2.26, and the statewide $0.72 tax per gallon is almost entirely responsible for this difference. Many disgruntled Californians are pushing back against the tax by targeting Senate Bill 1 (SB1), or the Road Repair and Accountability Act of 2017, for repeal this fall. If successful, the repeal would reduce the gas tax by 40%. The imminent threat of the law’s repeal looms heavily over state Democrats, who hope the $503 million raised by Senate Bill 1 will translate into noticeable road improvements before the November ballot rolls around.

California’s historic gas tax is motivated largely by the dreadful condition of the state’s roads. Highway conditions, road safety, traffic congestion, and travel time in California are in the bottom 20% nationwide, and the state ranks dead last in road quality with relation to tax dollars. Public transit systems are another deeply neglected subgroup of transportation in California and are among the worst in the nation.  Furthermore, an expanding driver population, high traffic density, and inclement weather exacerbate the state’s poor road and public transit quality. However, the root of these problems stems from the repeated misdirection and reappropriation of transportation funds.

A monumental instance of the misuse of state transportation funds that still resonates with many Californians today occurred in 2004, when Gov. Schwarzenegger diverted $1.1 billion from the state Department of Transportation, or Caltrans, to cushion his administration’s grievous overspending. This action left many Californians, Republicans in particular, skeptical of further transportation funding, fearing that the funds would, in the words of Sen. Wilks (R-Ca.-21), be “repurposed and redistributed… to pork-barrel projects and gubernatorial pipe dreams.” Publicized examples of the political misuse of specifically designated funds leave many Californians today with a sour attitude toward SB1, the largest gas tax increase in state history, and this strong anti-tax sentiment has impeded the measure’s reception both in the legislature and among average citizens alike.

The Road Repair and Accountability Act of 2017, pioneered by Gov. Brown, faced steep opposition since its inception in the state legislature. Republican representatives were especially distraught by further tax hikes and attacked the bill in both houses prior to voting. Rep. Allen (R-Ga.-12) claimed SB1 was passed in “complete disregard for ordinary Californians,” while Sen. Stone (R-Ca.-28) accused the bill of “wasting money on programs we can’t afford.” Facing harsh Republican opposition, Democrats barely managed to pass SB1 in a two-thirds vote in both houses. The bill became law in April 2017, and the gas tax took effect in November of that year. Repeal efforts began almost immediately, backed by legislators and activist conservative groups, with public opinion polls showing around 54-58% of Californians in support of a repeal. These polls indicate concentrated bipartisan opposition to SB 1 among the public, a worrying sign for the law’s supporters in the legislature and across the state.

Despite public backlash, SB1 is designed to prevent the shortcomings of similar laws that came before it. Democratic legislators, aware of Republicans’ fears of misappropriation, amended the state constitution in April 2017 to prevent the redirection of the $530 million raised so far by SB1 along with any future revenue. This amendment negates any possibility that transportation funds raised through gas taxes will be subject to political shenanigans such as the Schwarzenegger reappropriation. Caltrans and any other state or local transportation department enriched through SB1 revenue are also subject to oversight by the Inspector General and the California Transportation Commission to ensure projects undertaken with SB1 funds benefit constituents and reach timely completion.

Beyond SB 1’s immunity to political misuse, some still harbor further concerns about the new taxes’ effect on low-income Californians. Sen. Berryhill (R-Ca.-8) echoed this concern, arguing that higher gas taxes are “sticking it to working-class Californians” and that they “disproportionately hurt lower-income drivers.” This form of opposition to SB1 stems from the belief that California’s large working class, 80% of whom own cars, are especially disadvantaged by higher gas taxes since regressive taxation reduces their ability to provide for themselves and their families, thus lowering their contribution to state and local economies.

However, SB1’s increased gas tax is not an undue burden on California’s working class as much as it is a public service supplied through a flat tax. Ultimately, the gas tax is similar to many other excise taxes in that it is particularly disadvantaging to lower-income citizens since their disposable income is more scarce. Yet unlike a general sales tax, SB1 ensures that gas taxes are distributed fairly to all taxpayers and that the projects they finance directly benefit even low-income drivers through increased road and public transit quality. Because the tax revenue is invested back into the transportation sector, drivers are contributing directly to increased road and public transit quality in their localities and across the state, which improves travel for all Californians, not only higher-earners.

A testament to SB1’s promise is the variety of statewide road improvements that have already been started or scheduled with gas tax revenue. By June 30th, the end of this fiscal year, gas tax income is expected to approach $3 billion, and the funds collected so far have already been put to good use. Over $30 million went to state route and interstate highway resurfacing and repair since November 2017, while another $137 million was granted to finance 57 local projects across California.

In addition to ongoing and past projects, Caltrans is preparing for many more large-scale improvements in the years to come. In the 2018–2019 budget year, SB1 income is expected to nearly double, and Caltrans ultimately plans to fund $54 billion in road and public transit improvements in the next decade. The benefits of this newly blossoming source of state income will be split evenly between state highway improvements and transportation grants to statewide counties and cities. Investments on road and public transit will also be supplemented with projects involving transportation engineering research and environmental efficiency in road design. Caltrans forecasts that by 2027, SB1 will support the repavement of 17,000 miles of road, the replacement of 7,700 traffic signals and signs, and the refurbishment of 500 bridges.

Caltrans Director Malcolm Dougherty is enthusiastic about bringing long overdue transportation improvements to Californians and hopes that the department’s efforts defend SB 1 against repeal. Dougherty stresses that Caltrans is “moving as quickly… as possible to bring transportation improvements to the people of California” and adds that SB1 repeal would “terminate any future [transportation] improvements.” Despite moderate popular sentiment against SB1, there is reason to believe the law is here to stay. The law passed the state legislature with near unanimous support from Democrats, indicating legislative popularity, if not popular support. Gov. Brown is also dedicated to SB1’s survival, promising in his January State of the State address that “I will do everything in my power to defeat any repeal effort that gets on the ballot, you can count on that.”

The Road Repair and Accountability Act of 2017 represents a promising solution to California’s persistent transportation woes. The law has already been instrumental in completing almost $200 million worth of statewide road improvements and will pour over $54 billion into similar projects in the next decade. However, Californians have yet to see if these transportation improvements will be enough to defeat the popular repeal movement that has loomed over SB1 since its passing. SB1 supporters statewide are hoping that road and public transit improvements will convince voters that such measures are decades overdue, and are likely to remain so if Californians choose not to stand with SB1 on the November ballot.