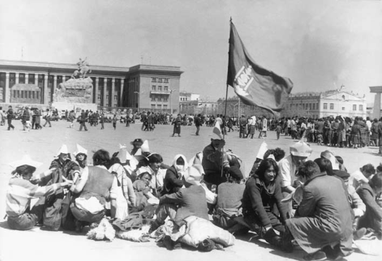 “A pedestal is as much a prison as any small, confined space.”

In the cruel winter of 1989-1990, Mongolia’s future hung on a precipice. Starting on December 10, 1989, demonstrators filled the Youth Square of Ulaanbaatar, demanding an end to the Communist regime that had killed hundreds of thousands. Eventually, the demonstrators won out and Mongolia transitioned to a multiparty democratic system. At the time, international media outlets focused far more on the prospects for the consolidation of democracy in Eastern Europe. Yet, nearly thirty years later, while global Freedom House Scores have declined for the twelfth consecutive year and Eastern European countries like Hungary have fallen under the grip of right-wing populists like Viktor Orban, Professor Julian Dierkes of the University of British Columbia notes that Mongolia has held two national elections in the past year where its population has resisted the appeal of anti-democratic populism. At first glance, one might conclude that Mongolia amounts to a bastion of liberal democracy.

Such a view would be mistaken. While Mongolia has undergone democratization, Mongolian society has not liberalized its treatment of women in tandem. Behind the façade of its formal democracy, Mongolia remains a society that subjects women to brutal treatment. The UN estimates that one in five Mongolian women experience intimate partner violence and only last year did the Mongolian government pass a law requiring law enforcement to respond to complaints of intimate partner violence. Nordogjav Ariuntaria, a lawyer at the National Center Against Violence in Mongolia, notes: “a 2004 law that criminalized domestic violence didn’t have the teeth to punish offenders, nor to protect victims.” Additionally, when one looks to the 2016 Global Gender Gap Index, Mongolia ranks 58th out of 144 countries. By these metrics, Mongolia fails woefully in its treatment of women.

Yet, in other aspects of its treatment of women, Mongolia has experienced comparative success. According to the National Statistics Office, Mongolian women have higher rates of education than men, amounting to “62 percent of college, university, and institute graduates in 2015.” Additionally, women stay employed at greater rates and live an average of 75.1 years, outlasting men by around a decade. These statistics appear to indicate that in many aspects, women experience greater inclusion within Mongolian socioeconomic life. However, tension does not exist between such statistics and evidence about the brutal treatment in Mongolian society. Rather, the inclusion of women in many aspects of Mongolian society facilitates their exclusion in other aspects.

In order to understand this paradox, one must understand the historical conditions that have laid the groundwork for the current situation. Because many Mongolian communities have long relied on herding for subsistence, these communities have deprioritized the education of boys. In these communities, “boys were pulled out of school to help manage the herd” as girls remained in school. Yet, social norms contribute to the perpetuation of intimate partner violence because, in Mongolian society, political power is delinked from economic power. Even as women have economic power, limits exist on their power in society because Mongolian society subjects them to brutal acts of violence. In such a situation, greater economic opportunities merely give women the responsibility to provide for their families rather than the power to make economic decisions. Even if women have greater economic power, they lack the ability to utilize it if the state fails to punish intimate partner violence.

Moreover, the economic inclusion of women has fueled social exclusion through the logic of moral licensing. Social psychologist Irene Blanken states that moral licensing refers to “the effect that when people initially behave in a moral way, they are later more likely to display behaviors that are immoral, unethical, or otherwise problematic.” Importantly, moral licensing can occur when a dominant group helps a non-dominant group even if the original relationship between the groups was unequal. According to Temuulen of the Mongolian Men’s Association, even as men dominate both Parliament and business, the increase in economic opportunities for women can facilitate declines in the self-esteem of men, which can bring about increased intimate partner violence. This point does not seek to suggest that such declines in self-esteem justify any form of violence. Rather, through moral licensing, improvements in the relative situation of women can cause men to feel justified in committing horrific acts.

Moreover, the treatment of Mongolian women implicates the future of democracy both domestically and internationally. Domestically, the treatment of women damages the health of Mongolia’s democracy. During the 1990s, Mongolia experienced economic crises that, without the efforts of women, may have crushed the transition to democracy. Oyungerel Tsedevdamba, a member of the Mongolian Parliament, notes that because of budget cuts due to the collapse of the Communist state, “one of every two working persons in an average family either became unemployed or was forced into early retirement on a minuscule pension by mid-1992.” Despite such conditions, women’s resourceful contributions minimized the economic deprivation that could have laid the foundation for authoritarianism. Mongolian democracy will only continue to consolidate if women feel that good governance helps them too. Thus, the Mongolian state must concentrate more on reducing the systematic exclusion of women if it wants democratic consolidation to continue.

Internationally, the treatment of women speaks to Mongolia’s ability to model democracy for the rest of the region. Currently, Mongolia’s democracy remains isolated with authoritarian China, North Korea, Kazakhstan, and Russia surrounding it. For this reason, Mongolia’s example appears necessary to show the world that countries in the region can achieve democracy. Yet, if Mongolia’s example teaches the lesson that democracy requires, or at least cannot ameliorate, the subjugation of women, then it becomes much more difficult to extol the virtues of democracy.

Thus, while Mongolian women have experienced inclusion in many aspects of public life, that inclusion has facilitated their brutal exclusion in other aspects of Mongolian society. While this relationship may seem paradoxical at first, with an understanding of Mongolia’s history, culture, and society, one can come to recognize how inclusion relates directly to exclusion. The exclusion of women in Mongolian social life both threatens Mongolian democracy itself and the prospects for democracy throughout the region. Only with an understanding of the systematic forces that contribute to both women’s inclusion and women’s exclusion can the Mongolian state effectively address these unjust power dynamics.