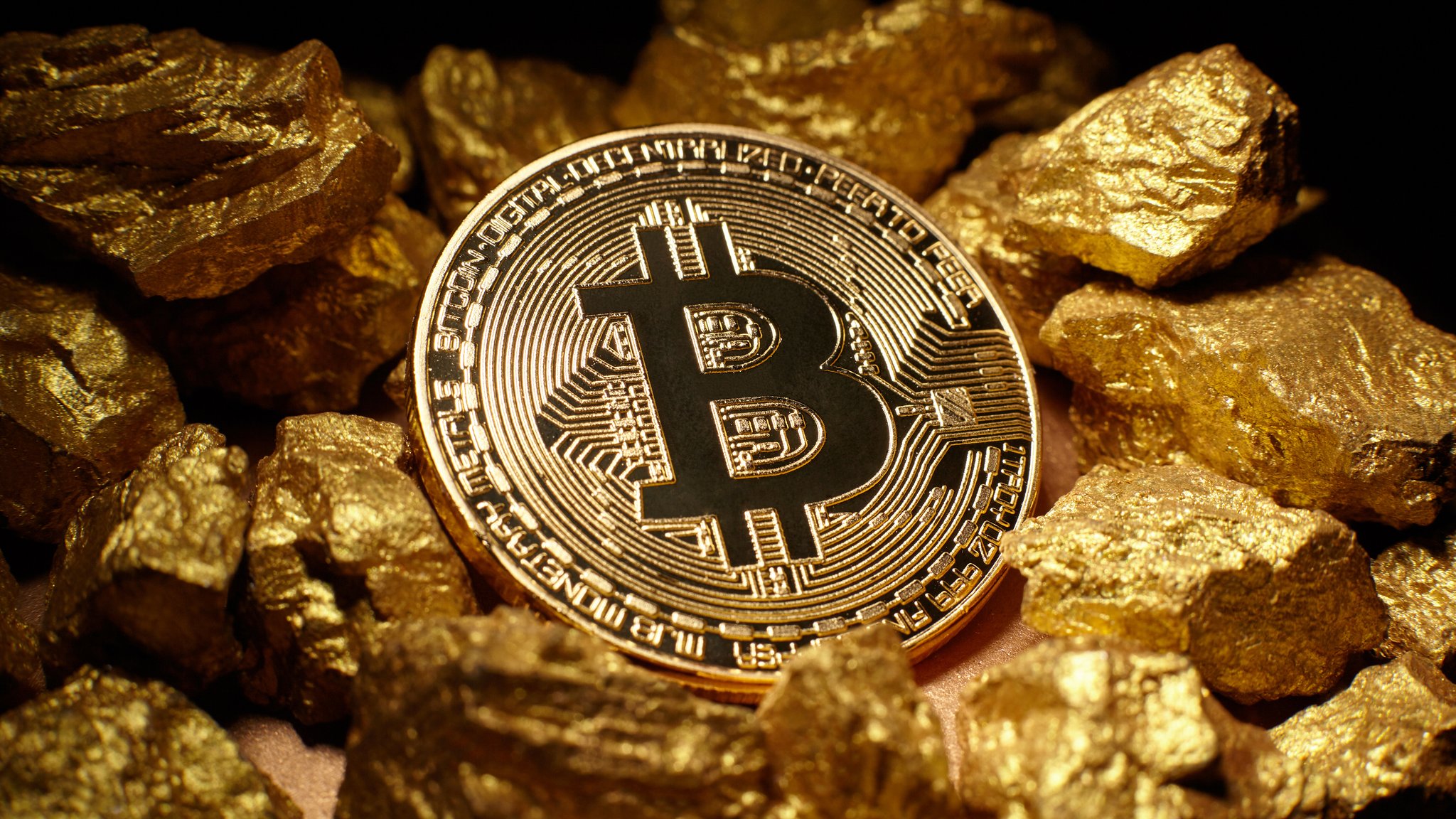 When I was very young, my parents always indulged me before bed with exotic folktales every night before sleep, coaxing me to sleep with stories of great adventure. Of all these stories, the one I found most fascinating was “Ali Baba and Forty Thieves.” “Open Sesame!” a magic word that opens the gate to measureless gold, lingered in my mind. I never thought this dream would come true in real life. But it did. However, the magic word is not some nonsense combination of two words, but a random 256-digit number-key. And behind the gate, is something, by market value, even more valuable than gold—cryptocurrency.

“Cryptocurrency” may not be a household term, but “Bitcoin” should ring a bell. After a  mysterious debut in 2009, Bitcoin took the lead in the rise of cryptocurrency. And in the past eight years, the new digital asset has accomplished two notable things.

First, it has become, theoretically, the most efficient payment method available, and its recently hiking liquidity proves that it is realizing its potential. The first thing to mention is the exponential growth in cryptocurrency’s trading volume, which is related to a growing global trend in governments and financial institutions to embrace cryptocurrency as a method of payment. Sweden is aiming to become the first “cashless” country in the world through its support of cryptocurrency; India, recovering from the demonetization of late 2016, has seen a  huge boom in its Bitcoin market due to the surge of national saving; in Venezuela’s turbulent economic conditions, cryptocurrency functions as an alternative to the volatile local currency. As trade volume increases, its usage diversifies, and the asset begins to flow more freely globally. Nowadays in the U.S., you can buy a house with cryptocurrency, or use it as collateral. Bitcoin ATMs are burgeoning around the world; you can even find one in downtown Berkeley. With the sheer increase in trading volume, diversified economic function, and its inherent convenience, cryptocurrency, and Bitcoin especially, has beaten Apple, the most liquid stock in the world, on liquidity.

Second, it has become the fastest appreciating asset. This needs no further proof. Since the day it came out, cryptocurrency was in mounting demand. Bitcoin, for example, rose from $13 per coin in 2013 to over $7,300 in November 2017, before the recent volatility, with a total market value of more than $100 billion U.S. dollars. And its most rapid growth was witnessed only recently, growing over five-fold from April to November 2017. Just imagine my roommate’s moaning that, had he not dumped his investment in Bitcoin before midterms, he would have doubled it.

However, this situation is not “normal.” It’s unusual for an asset to have such high liquidity and still appreciate at such a rate. Normally, returns on asset (ROA) and liquidity have an inverse relation. For example, a quantitative easing on the U.S. dollar, while increasing its liquidity, dilutes its value. The only explanation is that cryptocurrency is not yet a mature market. The supply and demand have not yet met an equilibrium, so excess demand has been driving up the price. The recent volatility of the cryptocurrency market confirms this assumption. However, it seems recently the market is getting more mature. As its liquidity increases, its volatility drops. It might be possible to see a mature cryptocurrency in the near future.

Everything seems great for cryptocurrencies, right? However, in mid-September, cryptocurrency suddenly encountered a 20 percent drop when China permanently banned Initial Coin Offering (ICO). With the sudden drawback, something becomes clearer: government attitudes and decisions will decide the future of cryptocurrency.

So what’s in leaders’ minds when they regulate cryptocurrency? There are two primary concerns: first is the illegal use of cryptocurrency; second is overvaluation and the potential for an asset bubble.

There may be no better way to launder ill-gotten money than through cryptocurrency. It’s highly liquid, impossible to trace, and entirely clean. With news everywhere heralding how bitcoin as “official currency” on the dark web and other black markets, the reputation of Bitcoin regarding illegal transactions has been severely tarnished. It is true that if cryptocurrency is deeply involved in money laundering, it will be a severe security problem. However, regulating cryptocurrency and monitoring its flow is easier than most people think. Since almost all bitcoin transactions are taking place on online exchanges, it is sufficient to register users on the exchange. And in practice, this actually works. One of the largest cryptocurrency markets, India, is well on its way to regulating online exchanges. Through a simple procedure known as Know Your Customer, all of its major exchanges (Unocoin, Coinsecure, Zebpay, to name a few) are well-equipped to make sure their transactions are clean. On May 1, 2017, after a group of hackers stole more than 10 million dollars from a bank, they immediately exchanged this money to Bitcoin on Zebpay. However, using their registered information, Zebpay was able to help the bank trace back all the money it lost. This is just one of many illustrative examples. The “danger” of cryptocurrency, under this light, should not be exaggerated.

Probably, the greatest concern in Chinese leaders’ minds when they banned ICOs, was the possibility of financial damage from a speculative bubble on cryptocurrency. Bubbles in cryptocurrency seem unavoidable, given the asset’s immaturity. When they pop, bubbles can have significant negative effects on financial markets. First, a pop would cause a decrease in consumer confidence as their wealth decreases alongside that of the asset. This loss in confidence would echo like a ripple on a tranquil lake, spreading to other parts of the economy, through what is normally known as the Keynesian multiplier. If the capital in the cryptocurrency is also invested in other financial markets, the bubble could also take its toll on other markets. With this in mind, we should find China’s hard ban on ICOs and strict regulations posted on cryptocurrency exchanges more sensible. The country, always striving for perfect control over its economy, is prone to be fear the factors over which it has no control—ICO is one of these. Initial Coin Offering refers to fund-raising through new cryptocurrency ventures and it is often used by start-ups to bypass the rigorous capital-raising process. And the amount raised is usually enormous. According to Xiangjun Li,  the Cointelegraph Head Manager for the Great China region, while normal capital-raising is counted in millions, fund-raising through ICOs often runs into the hundreds of millions. Thus, it poses a double threat to the economy. On one hand, the sustainability of the ICO projects are hard to ensure; on the other, ICOs link the cryptocurrency market to other financial markets.

In this context, China’s ban on ICOs is obviously due to feelings of financial insecurity. However, banning ICO may be more than is necessary. Compared with other financial markets in China, the cryptocurrency market may not be wild at all. The recent hard regulations imposed on it simply follow from the Chinese government’s conventional conservative handling of financial markets, which is not prudent at all from a development perspective. Just earlier this year, China hedged on  its promise of  a more market-oriented exchange rate system; as the tightening campaign on Bitcoin was going on, China issued a series of tough,  red-tape regulations on its mushrooming P2P lending industry, such that it was predicted that nine out of ten P2P firms could fail during 2017. Every move by the Chinese government has reduced the Chinese tax base or dismantled outside confidence in its financial markets, or both. It would be wiser to revise this flawed policy: tax ICOs rather than shut them down; write appropriate regulatory rules, not prohibitions. As the cryptocurrency price rose dramatically again in October a clear message was sent: even the most powerful authoritarian regime cannot kill cryptocurrency. It would be a better idea for China to embrace it before others do, but right now, that seems unlikely. There is pride at stake and just too much risk for this successful authoritarian state to ignore. However, it’s not the case that authoritarian regimes and cryptocurrency are incompatible. Unlike China, other authoritarian regimes decided to go with the flow.  In October, Moscow disclosed that they were going to issue an official Rissoam cryptocurrency– “CryptoRuby” and legalized ICOs. And for Singapore, Bitcoin has been a norm of life for years. Nevertheless, for the world to trust cryptocurrency, there is still a long way to go.