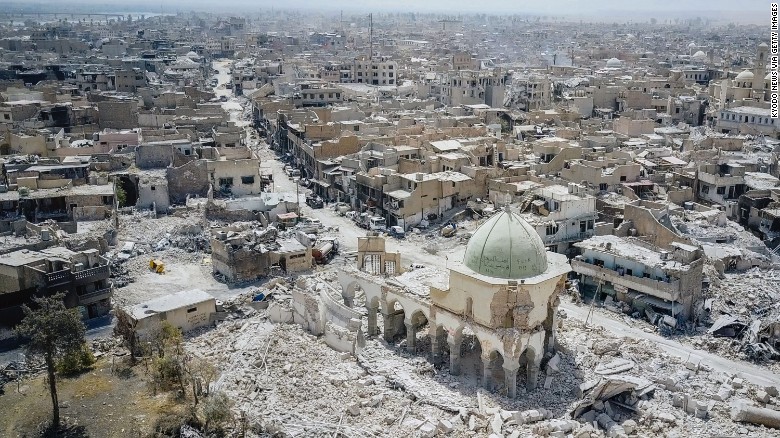 A Look at the Aftermath of the Battle for Mosul

On any given morning, the vibrant but battered city of Mosul is bustling with commercial activity, the liveliness of its citizens contrasting starkly with the devastation of the landscape that lies around them. After more than two years under ISIS’s oppressive rule, the city is finally beginning to enjoy the fruits of its rehabilitation efforts. The terrorist organization’s stringent restrictions on the lifestyles of the city’s occupants led to the closure of many shops as sweeping bans on their products were imposed and the city’s economy stagnated. The sale of women’s clothing became obsolete due to the outlaw of fashion beyond plain black cloths, electronics stores suffered as smartphones were banned to prevent recording of the events in Mosul, and the sale of music essentially halted as most forms of music and singing were forbidden as acts of devil-summoning.

Now, months after the end of ISIS rule, these stores are opening back up and a broader availability of products is being restored. Though many individual stores were destroyed by ISIS, markets such as the Market of Prophet Younis have become centers of commerce and economic activity. The reopening of stores in Mosul is indicative not only of the political liberation of its citizens but of a cultural liberation as well. The city itself is taking a deep breath after years of suffocation as women are once again free to shop for clothing through which they can express their individuality, parents can buy toys resembling human figures for their children, and citizens can gather to enjoy alcohol recreationally.

Stores are not the only things reopening their doors in Mosul; as the children of Mosul button their shirts and don their backpacks, schools are gathering what resources they can to rebuild the city’s education system. When ISIS came to power, they replaced the governmental school system with a propagandist religious and military training program, which led many parents to pull their children from school, preferring no education at all to what was offered.  To make matters worse, hundreds of schools were destroyed by fighting or by ISIS itself, leaving the recovering population with little to work with. With ISIS now out of Mosul, public schools are piecing their curricula back together, and students are returning to class in an attempt to pick up where they left off. In areas fortunate enough to have schools back up and running, classrooms buzz with excitement, a sentiment perhaps unfamiliar to most students in the US, but universal among the education-starved youth of Mosul. Despite the optimism displayed by staff, students, and parents alike, the detrimental effects of almost 3 years without schooling are still painfully evident as students struggle to compensate for lost time, taking makeup classes and placement exams, and teachers scramble to gather what materials and supplies they can. Classes are held in half-ruined buildings and books are in extremely limited supply, but collective efforts on the parts of both the government and its constituents towards reinstituting the primary education system are slowly but surely chipping away at the existing barriers to restoration.

Unfortunately for the citizens of Mosul, the problems they face extend far beyond their schools and stores. As citizens look around at how far they have come in the past few months, none can forget the great cost of their liberation. Current figures state, with limited accuracy due to the unavailability of reliable accounts, that more than 40,000 civilians and 7,000 Iraqi soldiers lost their lives in the two-year-long battle, and more than 1.5 million citizens have been displaced and forced to seek refuge elsewhere. Though the Iraqi government is striving for complete repatriation by the end of 2017, reasonable skepticism exists as to how that plan can be actualized considering the thorough destruction of homes and service buildings and the scarcity of clean water, electricity, and food. Politically and structurally speaking, Mosul’s road to recovery will be a long and arduous one. The process of reconstructing infrastructure is not only difficult due to the lack of the resources in the region, but also wildly dangerous, as the city-turned-warzone is still home to armed explosives and underground militants scattered throughout the rubble. The simultaneous missions of cleaning up the city, neutralizing remnant threats, and retrieving the dead all face additional emotional challenges, as no one has lived through the battle without loss in some form or another.

The victory of the Iraqis in the Battle of Mosul was one effectively dampened by the weight of its losses, and the same is true of its reconstruction. As thousands of civilians struggle to heal from the deaths of loved ones and mass displacement, they must bear the emotional weight accompanying the act of pulling the rotting bodies from under the ruins of their destroyed homes. Families have been decimated, orphans wander the streets aimlessly as their parents litter the ground below them, and the surviving Moslawis have all but given up on rescuing the living; the best they can hope for now is the retrieval of the dead, which is itself another process plagued by endless complications including but by no means limited to disease due to the rapid decomposition of these bodies in the oppressive heat, unstable infrastructure, and an unaccommodating climate.

Of all of the obstructions standing in the way of Iraqi progress, the corruption infiltrating both US and Iraqi government led efforts is arguably among the most counterproductive. None benefit from the profiteering of the Iraqi soldiers that allow potential remnant ISIS militants access to the city in return for monetary compensation and rarely hesitate to inflict violence upon innocent civilians, demanding payment from citizens before providing them the protection to which they should be entitled. Historically, Iraq has exhibited problems with the mismanagement of funds allocated specifically towards rehabilitation following conflict and destruction, and little action is being taken now to ensure that a repeat of this misconduct does not occur. If the people of Mosul are to find efficacy in the process of their rehabilitation, their success is contingent upon measures being taken to curb corruption, whether that be on the part of the Iraqi government or international organizations, to implement accountability measures for government workers. As an ally of Iraq and a contributor to the Iraqi government’s military and rehabilitative efforts, the US bears at least partial responsibility for placing pressure on leaders to enforce stricter guidelines for the conduct of its military. This, of course, presents its own challenges in execution, as accountability is an ill-defined concept in this context.

The small-scale moral deficiency of individual actors in Mosul’s government is revealing of the much larger and far more sinister threat present in the power vacuum that fertilized the soil in which ISIS originally planted its roots. ISIS and other terrorist organizations thrive in the absence of a strong political structure, a hallmark of Iraq both before and after Mosul was claimed by militant powers. Thus, through prevention of militant resurgence is a key facet of the Mosul’s reconstruction, it will not be complete until the safety of its people can be ensured by a stable government. While in the short term, the presence of the US military in Iraq is imperative, both in a physical and ideological sense, to the international support of Mosul’s recovery, the endgame of all parties involved is to rebuild all of Iraq, as broken as it currently is, into a more self-sufficient state capable of suffocating the rise of future potential insurgent groups.