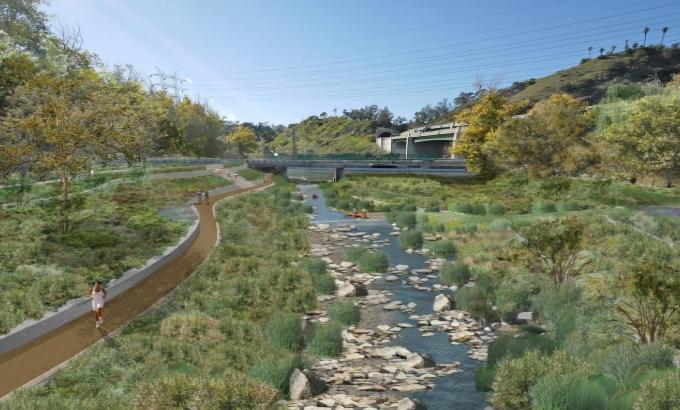 A New River For a Concrete Jungle

The desert river had flooded for the last time. After days of torrential downpour, it had overflowed its banks and wiped out nearly all the houses in its path, causing millions of dollars in damage. Los Angeles was at the mercy of nature, and for the last time. That year, 1938, the Army Corps of Engineers began one of the most ambitious infrastructure projects in California history. Californians sought to prove that, with a little bit of engineering and a lot of concrete, the twentieth century’s most improbable desert metropolis could flourish. Depending on who you ask, what happened to the Los Angeles River gets a different response. Ask an environmentalist and they may answer that the Los Angeles River is the ugliest river alive, an abomination to city and threat to the planet. Ask an engineer and they’ll tell you it’s the only way to support a county of 10 million in one of the world’s driest deserts.

California’s water infrastructure was born from the mind of William Mulholland, an Irish-born engineer and creator of the Owens River dam. More than any other person, Mulholland is the reason Los Angeles is the city it is today. He pioneered early 20th-century infrastructure styles and became famous (or, to some, infamous) for his uncompromising focus on reliability and efficiency which frequently came at the cost of the environment. To provide for Los Angeles’s thirst he successfully diverted the Owens River, turning a once fertile valley into a relative dust bowl. With this in mind, engineers in Los Angeles sought the most efficient, not the most aesthetic or environmentally conscious decision. The damming of the Owens River Valley gave the assumed ok. Trees and sediment were replaced by concrete and rebar. This same logic was applied to the Los Angeles River. While a concrete paved river was by no means the most sightly of methods to control floods, it was by far the most practical. Natural beauty and any thought of wildlife conservation took the backburner to the newest techniques of city planning and organization.

While it may be easy to deride what seems like now outdated or even backward policy, one must remember the nearly impossible situation Los Angeles found itself in by the 1930s. Poised to become the next great American metropolis. Without the Owens River Aqueduct, the city itself could never have grown past a population of a few hundred thousand. Thus, the seemingly combative relationship Los Angeles has with its surrounding rivers, wetlands and watersheds was borne out not out of spite but necessity.

When the Army Corps arrived on the scene late in 1938, they were faced with a daunting task. The Los Angeles River, being a desert river, was inherently unpredictable, flooding and receding at seemingly random points along its banks. While irrigation engineering is as old as civilization itself, the concept of cementing a river –– not just to stabilize a section but the entire river itself –– was somewhat new. In order to make the task more approachable, engineers first needed data on when and where the river flooded. With no reliable city records on such a haphazard occurrence, engineers instead had to interview the oldest living residents of Los Angeles, many of them native peoples and Hispanics. The interviews provided valuable insight into the comings and goings of the river, which in turn informed the concrete banks and steel drainage pipes. William Deverell, a Professor of History at USC who specializes in the history of California water policy, emphasizes that while these interviews “may have looked democratic, all that talking to old people…the project was infused with undemocratic presumptions about who would inherit the L.A. of tomorrow.” The developers of the 1930s are not the inheritors of today’s river, and the goals of the Los Angeles of the past –– unbridled growth rather than sustainable development –– are not the goals of today.

Today, the debate surrounding the Los Angeles River has the potential to reshape the aesthetic and potentially redefine Los Angeles for the decades to come. A litany of nonprofits exist that advocate for the revitalization of the Los Angeles River. One, River LA, proposes a Greenway 2020 plan that would aim to convert nearly all of the L.A. River’s 51-mile stretch into a stretch of reclaimed wildlife that could be used both to promote environmentally sustainable development and provide much-needed recreation and green space for the surrounding inhabitants. Los Angeles’s Greenway 2020 plan recognizes the Los Angeles River as one of the cities major watersheds and still poses the same flood risk it did nearly 80 years. Thus the city must try to maximize the river’s utility as a necessary piece of flood control infrastructure while simultaneously making it habitable for local flora and fauna and even adding recreation space for local residents.

That being said, there remains much work to be done if these advocacy groups hope to completely revitalize the L.A. River. Such a project would cost millions and be a massive undertaking spanning many years. There remains over 51 miles of poured concrete and millions of dollars of property that would have to be confiscated via eminent domain. Just revitalizing one major section of the river, near an old Union Pacific Railroad yard, could cost over $250 million. However, if Los Angeles is serious about such a project there remain alternative sources of funding to help ease the burden of the city. The Green California Initiative provides state money to cities and counties looking to become more environmentally friendly.

Although current plans hope to inevitably revitalize all 51 miles of riverbed, the sheer magnitude of such a project has forced the city to move slower than some activists would want. Currently, a plan has tentatively been approved to revitalize an 11-mile stretch that cuts through both the City of Glendale and Los Angeles proper. Along this zone, Los Angeles Country would attempt to recreate native wetlands while simultaneously providing paths and raised walkways to facilitate pedestrian traffic. Excess water, instead of flooding the banks of the river like it did in the 1930s, would be channeled into aqueducts running parallel to the site. Also, the new river would be widened by almost a football length, a tactic used to disperse the flow of floodwater thereby reducing water levels during storm season.

The Los Angeles River arose out of necessity but today finds itself a remnant of a city focused on growth rather than a metropolis focused on resident life. While the cementing and creation of the river was by no means a democratic process, the future of the river has its heart in community activism. L.A. now begins the challenge of adapting California’s largest metropolis into an environmentally sustainable city. Form and function must be merged, starting with the L.A. River.