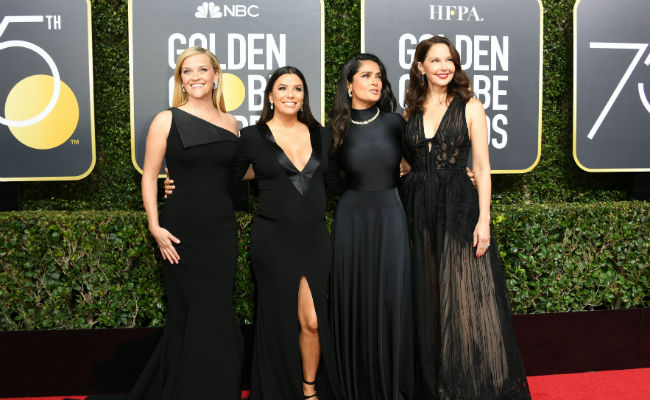 How Much Does Feminism Cost? High Fashion and the Commercialization of #MeToo

Sheathed in black cloth and armed with badges pinned to lapels, they marched across a battlefield rolled out in red. The seasoned and the newly inducted alike faced off against swarming barrels of cameras and brandished microphones. Shoulder to shoulder they descended on a different kind of combat zone: the Golden Globes. It is not often that the images of celebrity and soldier are conflated, but the #TimesUp blackout at the award show calls to mind images of war and revolution.  For designer Prabal Gurung, however, an all black palette isn’t fashion’s only available response to the movement. According to his vision,a strong woman need not do away with traditionally feminine fashion. Quite the contrary, he claims. Gurang’s most recent collection was inspired by the Gulabi Gang, a remarkable group of Indian women that work together as vigilantes to fight sexual predators and domestic abusers. His New York Fashion Week show was a cacophony of purples and pinks, of feminine ribbons and diaphanous lace and of twisted silhouettes clutching white roses. The Hadid sisters closed the show with their arms interlinked in a show of support that symbolized a kinship between all women and that extends beyond familial relation.

Gurung is not the first designer to pay homage to feminism, nor will he be the last. Sociopolitical controversy and fashion have always been inextricably intertwined. In March last year Dior debuted a white T-shirt emblazoned with the phrase ‘we should all be feminists’ available to the public for an astronomical $710. In its product description, the brand makes vague promises to donate an unspecified ‘percentage’ of proceeds from sales to Rihanna’s non-profit. The hundreds of dupes available online for prices as low as $14 don’t bother with even partial donation.

Feminist has, for better and worse, become a buzzword. It is perhaps the token descriptor of our time. Feminism has emancipated from its clearly political and economic origins. A feminist is no longer a bra burning radical that spouts Marxist ideals and pushes for specific socioeconomic and political change. Instead, feminism has been rebranded for the general public’s consumption. It is now an institution that is trendy and current. It is a movement led by Emma Watson and her ilk that speaks in a younger, whiter voice and says, “Yes queen!” Its name is often reduced to the stomachable ‘girl power.’ Its vague new mission of self-empowerment and its glamorous new face in the form of Beyonce has been seized upon by marketing teams and design teams in the fashion industry. In 2007, Dolce and Gabbana’s campaign advertisement featured the eroticization of violence against women. Today, however, the tone is different:  advertisements depict powerful images of plus size models staring resolutely into a camera, donned in graphic t-shirts that make direct reference to feminist theory. Brands cannot capitalize on the male gaze without backlash or threats of boycott. Sexism no longer has the same selling power. Unfortunately, it has been replaced by feminism.

Is the capitalization of feminist ideals and feminism surprising? Not quite.

At first glance, feminism and capitalism are incompatible systems. Leftist ideology emphasizes that capitalism exacerbates inequalities by arguing that capitalism, in its essence, requires that some people possess more economic power than others, and this translates to further disparities in social and political capital as well. On the other hand, feminism seeks to abolish sexist oppression and establish equity between all people, whether they be male, female, or non-binary. In practice, however, the two intersect more than one would expect. The #MeToo and the Times Up movements serve to shed light on serious issues of sexual harassment and assault both in the workplace and outside of it. In response to the prominence of the movement and the hashtag, Etsy and other online stores have been flooded with #MeToo merchandise, from travel mugs to badges to sweatshirts. GirlPowerPendants sells a necklace with the hashtag adorned across it in neon pink in an ironic echo of Gurung’s sentiments. Most of these sellers do not mention any charitable funneling of their proceeds.  Their feminism extends not to political action or economic involvement, but instead remains rooted in the inherently flawed idea that shopping can replace political action.

Feminist fashion doesn’t deserve a complete dismissal. Fashion serves as an art form and as an essential form of personal expression for many people—and its amalgamation with feminism is hardly unwelcome. The world of style serves to empower people and helps them express their creativity and often their culture and identity. It can also act as a tool to establish a career in the increasingly viable and lucrative industry of Instagram and other social media influence. When public figures like Rihanna and Natalie Portman appear on social media in Dior’s T-shirt the feminist movement is bolstered and, to their fan base, legitimized. If it weren’t for the personal stories of the women in Hollywood who came forward in support for TimesUp, the movement would not have gained so much traction.Their experiences helped shed light on the unaddressed culture of sexual abuse and harassment in Hollywood. It was these women, consciously clad in pink hats and expensively disheveled designer t-shirts, that brought issues of inequality and harassment to a jarring forefront.  And in doing so whilst clad in their high fashion merchandise, they unwittingly supported the systems that perpetuate the problem.

According to the Fashion Transparency Index by Fashion Revolution, Dior scored 0 out of 250 possible points for their disclosed policies in 2017. The index takes into account 5 categories, including policy and commitments, governance, traceability, its response to backlash, and spotlight issues. Dior’s parent company is LMVH, which also includes brands Louis Vuitton, Marc Jacobs, and other prominent designers. LMVH has no explicit code of conduct to protect its workers from harassment at production factories where they pick and process raw materials. The company hides behind its insistence that its products are made in Europe in an attempt to counteract images of sweltering sweatshops in developing nations like Bangladesh, but its factories in Eastern European nations and Turkey show similar dismal conditions, made worse by the hours of unpaid work and crackdown on unionization. The company refused to offer comments after its long term collaborator, stylist Karl Templer, was accused of sexual harassment by more than dozen models. Dior continues to collaborate with Mario Testino after fifteen male models came forward with their own allegations against the famed photographer. The company’s silence sends an obvious message—their feminism will be restrained to t-shirts that cost more than the wages of an entire sweatshop of women who make them.

The well-intentioned movement of #MeToo and feminism is exploited by the very system it strives to dismantle. A brand’s feminism cannot exist in a vacuum. Its support for the cause will never be intersectional until it alters the system it thrives in—and pushes for true activism, not a hollow idea of it. Brands pledge their support yet do little in the way of true reform through policy and management. Movements like #MeToo cannot succeed if they fail to acknowledge their inherent limitations. If feminism is packaged in a lace Dior gown, why should we be surprised when it sells?

Maryam Khan
More from The ReviewMore posts in The Review »