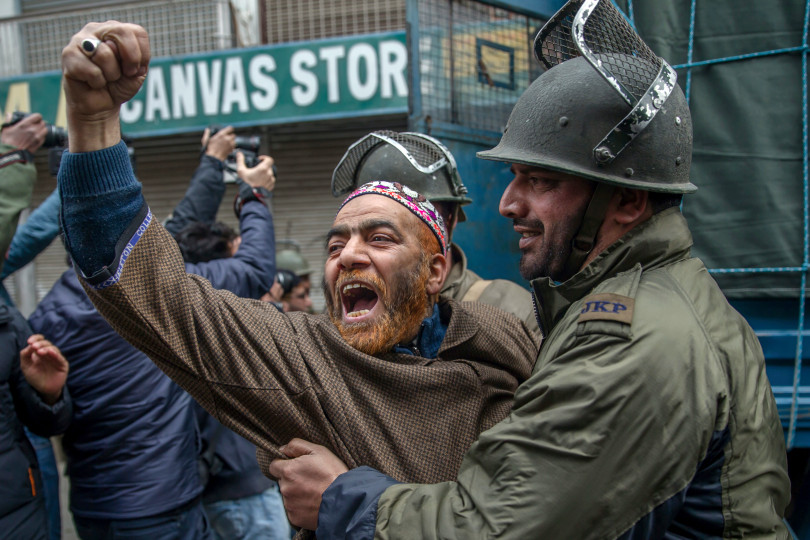 In 1947, the political landscape of South Asia transformed as the fight for independence triumphed. The demands of Indians everywhere who had taken to the streets and implored the British to “Quit India” were finally heard. British colonial rule of India came to a complete halt with the passage of the Indian Independence Act, commonly referred to as the partition that freed India and created the nation of Pakistan in August of 1947. This is often considered the end of occupation in the South Asian region, but today, the battle for independence continues to rage on in the region of Kashmir. Gratuitous violence, rigid curfews, and complete disregard for human rights have become the unfortunate, everyday occurrences for the Kashmiri people.“It bears underlining that the population of Kashmir is approximately 5.5 million, which means that there is one security officer for every eight Kashmiris, a ratio which beggars Mubarak’s Egypt”. The vicious occupation of Kashmir is unparalleled by any occupation in modern history. Though there have been parallels made to the Palestinian/Israeli conflict and the efforts to establish a Kurdish state, the nuances of the Kashmir conflict make its political implications very distinct. The region of Kashmir is significantly larger than the Palestinian territories and has a population several times larger. Additionally, the struggle for Kashmiri independence differs from the Kurdish battle because the Kurds have a common ethnic identity and allies in the international community, namely other socialist nations. The regional stability in Kashmir has been volatile for decades, which can largely be attributed to the unresolved territorial dispute between India and Pakistan regarding Kashmir, which makes resolving this conflict a prerequisite to any lasting positive change in the region. Kashmir must be established as a free and independent nation to create lasting stability in the region.

The long-standing conflict over Kashmir has made resolving this conflict seem hopeless to the rest of the international community. Control over Kashmir has been disputed since the 1940s when India and Pakistan gained their independence. Following independence, the prince states of India were given a choice, about which country they could join. Kashmir’s Muslim majority implied that it would join the newly formed nation of Pakistan, which was establishing a strong Muslim identity. The issue was that the ruler of the time, Maharaja Hari Singh, had yet to make a decision and was facing escalating tensions. He remained conflicted while “leaders of the Muslim League were attempting to woo him to Pakistan, while his Hindu sympathies seemed to incline him in favor of India”. Ultimately Singh chose to join India as he faced increased threats of military action from Pakistan, hoping that India’s strong military force would deter Pakistan’s potential attacks. His commitment to join India came with the agreement that Kashmir would be able to hold a referendum to determine what the ultimate fate of the Kashmiri people would be, a decision that could be made free of increasing military threats from Pakistan. While initially Prime Minister Jawaharlal Nehru, the first prime minister of an independent India, had agreed to this, he failed to honor this promise.

The referendum and right to self-determination have been stolen from the people of Kashmir as they continue to be controlled by powerful countries that only see the territory as a pawn in their political chess game.  India controls the southern and eastern portions of Kashmir with its ownership of the state Jammu & Kashmir that accounts for 45% of the territory, giving India the largest holding in the region. Pakistan controls approximately 35% of the territory with its possession of three areas in the north and west portions known as Azad Kashmir, Gilgit, and Baltistan. China-controlled Aksai Chin in the northeastern part of the region accounts for the remaining 20% of Kashmir. Groups that have been colonized and occupied have often made the case that self-determination is a human right for oppressed peoples. While there’s considerable merit to that argument, in the case of Kashmir, a referendum must be guaranteed because it was a political promise that was made and has yet to be honored. Recognizing the results of a referendum would restore legitimacy to Indian authority in the eyes of the Kashmiri people and result in better long-term relations between the two. China and Pakistan would be in favor of this referendum because it will detract from the strength and influence of India. Additionally, Pakistan is able to move away from a conflict that has become a source of great loss of resources and political capital.

With three global superpowers involved in a territorial dispute, it would be reasonable to assume that this issue warrants major concern and consideration from the international community. Surprisingly, this is not the case. China, who claims portions of Kashmir, has publicly refused to get involved in the conflict stating they support “the solution of the disputes through bilateral negotiations between the two countries”. International organizations and other countries have no vested interest in the region and are reluctant to get involved. The issue of Indian, Pakistani, and Chinese occupation of Kashmir has been turned into an internal Indo-Pakistani affair removed from the rest of the world. This can be evidenced by its removal from the United Nation Security Council’s list of unresolved international disputes in 2010. Despite the lack of global political spotlight, many of Kashmir’s internal politics reflect its desire for independence. Three Kashmiri political parties —The Jammu and Kashmir Democratic Freedom Party, The Jammu and Kashmir People’s Democratic Party, and The Jammu and Kashmir National Conference party—all have their foundational platforms advocating self-rule for Kashmir, a message that deeply resonates with the people of Kashmir. The calls for an independent Kashmir come with the hope that the currently militarized region would see a substantial decrease in sexual violence, police brutality, and abuses of power being perpetrated.

While Kashmiri independence would satisfy the will of the people, it’s also the best option for resolving the longstanding geopolitical tensions in the area. India and Pakistan are two strong states with nuclear powers whose main source of conflict is this territorial battle. If tensions between the two states ever reach a flashpoint, it would almost certainly be over the highly militarized and politicized region of Kashmir. If Kashmir is established as an independent territory, this means Pakistan, India, and China must all renounce their claims to the region. This would involve a complete removal of all the Indian and Pakistani occupying forces in the region. While Pakistan would be unhappy with severing their ties to Kashmir, it provides them with a unique opportunity to curtail Indian power. China also maintains a vested interest in balancing Indian authority and influence within the region. While Kashmir was once a source of diversity and strength for India, it has now become too much of a hassle. Militant insurgencies, billions of lost dollars, and nearly a million soldiers have become too high a price for India to remain in a region that has no political benefit for them. After constructing a free Kashmir, there’s much to be imagined about how India and Pakistan will interact with the fledgling nation. While it’s safe to assume there’s political merit for both countries to ally with the state, rushing to do so in a way that snubs the other would assuredly raise tensions in a new, potentially disastrous way. However, the founding of a free Kashmir would draw in an international spotlight that has never existed on the issue and serve as a form of international pressure to keep both countries accountable for not impeding upon its sovereignty. The creation of a free Kashmir would open the gates for bilateral communication between India and Pakistan on a variety of other issues to further improve prosperity within the region. Professor Ron Hassner, an International Relations professor at UC Berkeley who focuses on international conflict and religion, claims that India and Pakistan are like “a divorcing couple that can’t stop fighting about who gets the house. In doing so, it’s destroyed the house, it’s destroyed the children, and they can’t stop. They don’t know how to disentangle. In the case of the divorcing couple, there’s an easy solution: a judge shows up and says, you get the house and you get the kids, we’re done. In the case of a dispute between two countries, there is no such judge”. Establishing a new sovereign country as a method of resolving conflict has proven to be a difficult and seemingly impossible task, but in the case of Kashmir, remains a viable option. To create long-term stability in South Asia, Kashmir must achieve independence, or the region will remain embroiled in a conflict that’s simply a remnant of bad history.