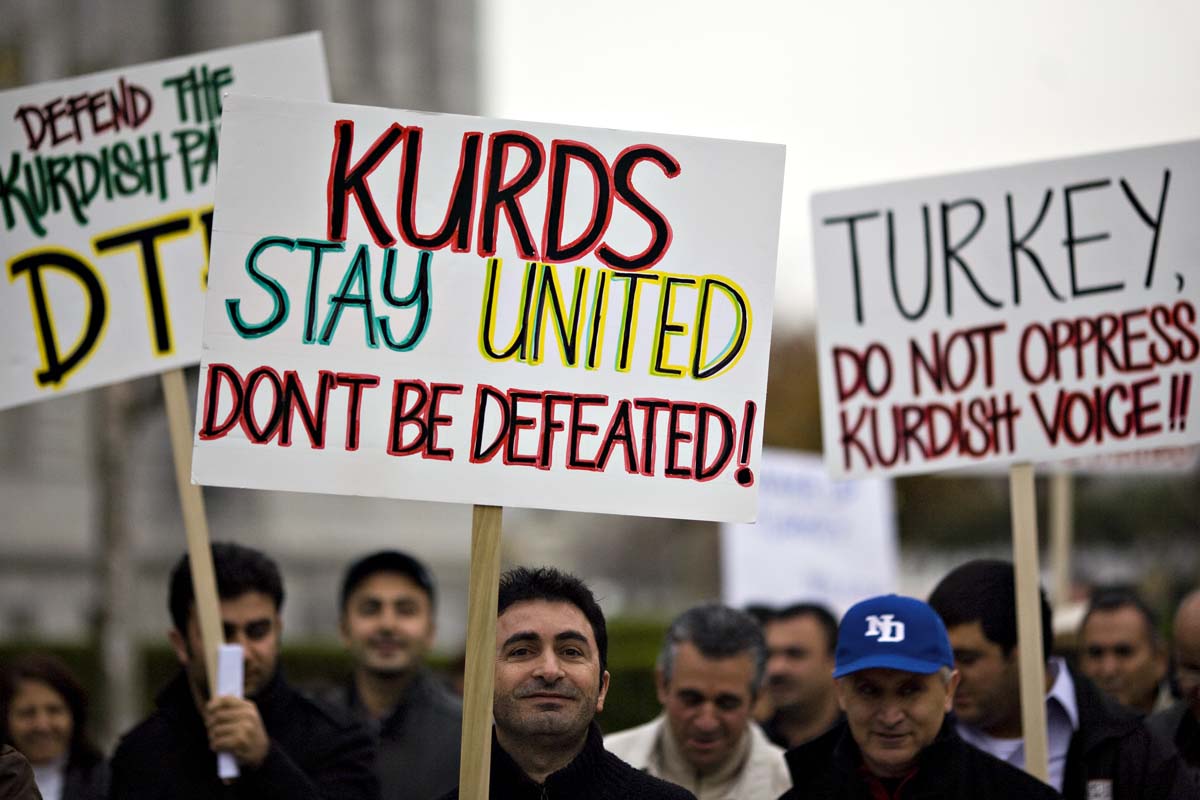 The Sovereign State: A Look at Catalonia and Kurdistan

“Common sense will tell us, that the power which hath endeavoured to subdue us, is of all others, the most improper to defend us.”

Catalonia, an independent region in the northeastern part of Spain, has recently returned to the international scene. On October 1st, 2017, Catalonia held an illegal referendum to vote on the question of state independence. The reaction of the Spanish government led to violence and protests throughout the region as police stepped in to prevent the Catalan people from voting in the referendum. The result was a vote 90 percent in favor of independence, although it should be noted that less than half of the region voted in the referendum. Following some confusion about Catalan leader Carle Puigdemont’s intentions after the referendum, the region definitively declared independence, leading to Spanish retaliatory measures such as the jailing of Catalan leaders.

While attracting varying levels of media attention over the past few decades, the Catalan independence movement originated when Philip V took over Barcelona in 1714. The conflict between Catalonia and the rest of Spain escalated with Francisco Franco’s ascension to power in 1939, when the Catalan people were violently subjugated by the Spanish dictator. By the time Franco’s reign ended in 1975, the damage he had done to the Catalan people had become fuel for the region’s nationalistic movement.

In 2006, Spain granted Catalonia the status of a “nation,” but the Spanish Constitutional Court was quick to counter the ruling in 2010, a huge disappointment for many Catalan nationalists. This ruling created substantial backlash within the Catalan community, where over a million people took to the streets in protest of the decision.

Rooted in a complex history, the Catalan independence movement today is characterized by two key factors: culture and economy. One of the key reasons that Catalonia has pushed for its independence throughout history is that its people feel that they are unified under a distinct culture. While the Spanish government may push the belief that the country is culturally united, Catalan “independistas” disagree, arguing that the Catalan language and its unique regional culture differentiates it from the rest of Spain.

Martí Pont Rojas is a college student in Catalonia. Before the most recent referendum, he explained that he planned to vote in favor of Catalan independence because “Spain needs a wake-up call.” Rojas argues that Spain and Catalonia “will never be united” if Spain continues “attacking people, our language, and our culture.”

While cultural unity is often Catalonia’s most advertised narrative, an economic argument is also crucial to the region’s claim to sovereignty. As the richest and most industrialized region in Spain, Catalonia accounts for 20 percent of the country’s national economy. This economic discrepancy between Catalonia and the rest of the country has led many Catalan nationalists to argue that the region is contributing more to the country than it is receiving benefits, especially in the form of taxes.

Iraqi Kurdistan, an autonomous region within Iraq, has also been making strides towards independence. The region is populated by Kurdish people, the 30 million of whom are spread among different countries in the Middle East. While Iraqi Kurdistan has come to be seen as the main home of the Kurdish people, many Kurds are concentrated in the parts of Turkey, Iran, and Syria that neighbor the region. The Kurdish independence movement has been active for decades, and supporters desire the union of the land on which Kurdish people live into a single autonomous state. Like Catalonia, the Iraqi portion of Kurdistan has recently received increased media attention due to a referendum, in which an overwhelming majority of the region’s population showed its support for Kurdish independence.

Just as in Catalonia, cultural unity plays a key role in the Kurdish independence movement. In Iraqi Kurdistan, however, the tension between Kurds and Arabs has been more pronounced in the recent past due to violence. Under Saddam Hussein, the Iraqi Kurds were severely abused, with chemical weapons used against them. Pursued by the Iraqi army, over a million Kurds fled their homes, leading to thousands of deaths. Over the next decade, the Iraqi Kurds were subject to domestic trade sanctions as well as an international embargo, which harmed the region’s economic growth.

Iraqi Kurdistan’s economy is also a significant aspect of the region’s push for independence. While Catalonia boasts high economic productivity, Kurdistan is home to a crucial natural resource: oil. The nation’s capital, Erbil, is a significant player in the oil industry, which has arguably caused much of the historical conflict in the region. Losing this valuable territory, which could hold over 45 billion gallons of crude oil reserves, would have a significant impact on the Iraqi economy.

In terms of culture or economy, Catalonia and Kurdistan have very little in common. Yet despite their glaring differences, the two regions share the global media spotlight as culturally and economically unified nations that have recently made strong steps towards independence.

The simultaneous increase in these two regions’ international presence raises the question of how, in general, a state would benefit from independence. While both Catalonia and Kurdistan are pushing for their independence for cultural, social, and economic reasons, the benefit of state sovereignty extends beyond these issues to the idea of the social contract. Political theory is a useful tool in the analysis of these benefits.

The United States is a great starting point when looking at modern-day independence movements from a historical perspective, as we are a much younger country than most other developed nations. In the U.S., Thomas Paine argued for American independence in his influential piece,  Common Sense. Paine based his analysis on what the role of a government should be and argued that the British government was failing to fulfill that role for the United States.

Strikingly, the structure of Paine’s arguments is remarkably similar to those used by Catalonia, Kurdistan, and most other modern independence movements. The underlying assumption in Common Sense is that if a government fails its people, the people have the right to a new regime. In the cases of Catalonia and Kurdistan, these new regimes would take the form of independent governments.

Analyzing the relationship between a government and its subjects takes us back to Thomas Hobbes, who established social contract theory in his text Leviathan. In this text, Hobbes describes an all-powerful ruler, or “Leviathan,” who is responsible for maintaining social order through a social contract with his subjects, without which society would cease to exist. John Locke expands on Hobbes’ concept of the social contract in The Second Treatise on Government, where he argues that the only way that governments attain legitimacy is through “consent of the governed,” whereby people willingly enter into a social contract for mutual benefit and the establishment of civilization.

If one subscribes to the ideas of Hobbes and Locke, one must inevitably raise the moral question of Spain’s right to Catalonia, or Iraq’s right to Kurdistan. From the recent referendums, it seems that a majority of the populations of each region may desire independence. Aside from political logistics or established economies, the desire of each region to be independently governed holds weight. We can even go so far as to ask whether Spain, a developed and progressive nation, can ever truly be a democracy for the Catalan people. A democratic state must endow its citizens with a level of choice in how they are governed, but how much choice and what types of choices are required for a country to be able to call itself a democracy is a matter of continual debate.

We can also look at why countries would support or oppose the independence of either of these regions. In terms of Spain and Iraq themselves, the obvious answer seems to be that no country would be willing to lose part of its territory, especially in the case of Catalonia, which is such an important asset to the Spanish economy. Loss of territory would be both an inherent loss and a signal of weakness to other potentially independence-seeking regions. The arguments of greater Spanish or Iraqi cultural unity also come into play, as the loss of a subculture will be acutely felt by the rest of the nation.

For countries outside of Spain or Iraq, opposing independence would still make sense out of a dedication to international stability. The relationship between Israel and Iraqi Kurdistan, however, is unique, as a preference for non-Arab allies in the Middle East overrides Israel’s desire for general political stability. But while international stability colors the stance of most countries in questions of sovereignty, the regions seeking independence will always have different priorities.

Catalonia and Kurdistan share aspects of their plight for independence, but in many ways, the most striking commonality between the two regions lies in what is to come: both aspiring nations are marked by a potentially volatile and uncertain future. In addition to each region’s individual trajectory, looking at the two in tandem allows for a broader analysis of the idea of state sovereignty, and what it means in the context of an increasingly interconnected world.