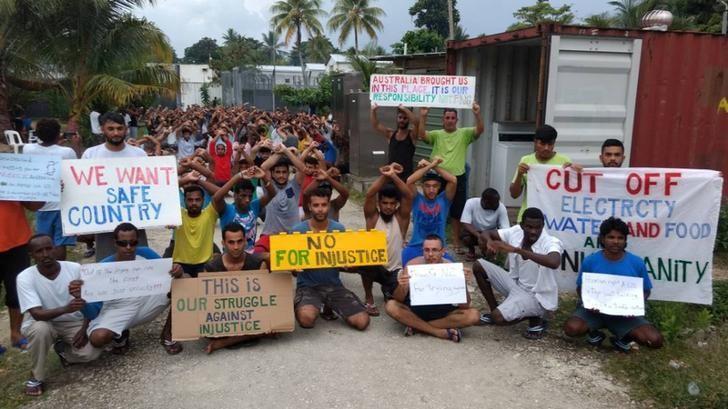 On July 23, 2013, Kurdish journalist and now refugee Behrouz Boochani arrived in Australia via broken-down boat after two months of travel, accompanied by 65 other refugees fleeing Iran. Boochani was leaving his home country to avoid impending arrest and imprisonment for his politically inflammatory writing, and hoped to find in Australia a new home and a more receptive audience to which he could freely voice his opinions. However, upon arrival, Boochani and his travel companions were alarmed to be met, not with open arms, but with rejection. Due to the July 19 passage of the law that had occurred just days earlier barring asylum seekers from entry into Australia, Boochani was turned away from Australian soil by immigration officers and then exiled to a processing center on Papua New Guinea’s Manus Island, where he has been stranded since August 2013.

On October 31 of this year, Australia’s Manus Island detention center in Papua New Guinea (PNG), an Australian-owned temporary camp for migrants and refugees, was closed down in an effort to force its 600 inhabitants to relocate to another refugee camp established in a local neighborhood of PNG.

Following the establishment of the Regional Resettlement Agreement in 2013, Australia has had a working agreement to house a portion of its incoming refugees on Papua New Guinean soil as long as the refugees are self-sufficient and/or the costs of their settlement are covered by the Australian government. These refugees originate mostly from Iran, Afghanistan, Pakistan, and Myanmar, and many have been residents of Manus Island and similar processing sites for multiple years now pending approval for more appropriate placement elsewhere.

Over the past few years, the Australian government has been working to establish “suitable” housing for these refugees at sites both within the continent and abroad in partner nations like Papua New Guinea. Announcements came last year that alternative accommodations had been made in the town of Lorengau, PNG. However, refugees on Manus Island are reluctant to comply with resettlement efforts. Refugees in Lorengau had claimed to experience violence at the hands of local citizens, leaving asylum-seekers on Manus frightened and apprehensive.

Following the closure of what has been widely dubbed “Australia’s Guantanamo”, these refugees, most of whom are seeking asylum from the Australian government to escape conflict in the middle East and Asia, barricaded themselves within the Manus Island detention center in protest despite the government cutting off electricity and water supply to the camp.

Hundreds of these refugees chose to struggle to survive without food, water, power, or medical attention over temporary residency in Lorengau. They were locked in a standoff with a baffled Australian government and both Australian and PNG police forces for almost the entire month of November.

Morale, sanity, and resource supply were at an all-time low within Manus Island, and reports show that a health crisis developed rapidly as men with medical needs lacked the supplies and attention they needed to survive. The number of men still inside the immigration processing center has been in steady decline over the past few weeks as some agreed to relocate while others fell victim to the unsafe, deprived conditions. Ultimately, the remaining refugees were forcibly removed by Australian and Papua New Guinean police forces.

As Australia’s national government has been scrambling to address the events unfolding on Manus Island, it somehow still attempts to avoid taking responsibility for the catastrophe that has resulted. Official statements from government officials continuously divide the blame for the crisis and confusion between the ineptitude of the PNG government and the stubbornness of the refugees on the island. Australia defends its role in the crisis by citing a failure on the part of Papua New Guinea in providing adequate accommodations and a failure on the part of the refugees for refusing to accept what the government claims are generous offers of housing. As far as the Australian government is concerned, it has exhausted its every effort; it managed to get Papua New Guinea to open its borders to the refugees, and the fault is that of the refugees for not immediately and enthusiastically accepting the offer given to them.

Despite the immense failure of the Australian government to help the refugees that placed their faith in its efficacy and goodwill, it is not the only national government at fault; the government of Papua New Guinea has also rejected proposals to restore power and water services to Manus Island. This points to yet another instance of Australia and Papua New Guinea’ refusal to cooperate to find solutions as they collectively continue to deflect the need for accountability to both one another and the refugees.

Meanwhile, the gravest emergency amid all of this chaos appeared to be the quickly deteriorating health of individuals within the camp; reports have emerged of diabetic men falling ill without access to insulin, the spread of infectious diseases accompanying sanitation problems within the processing center, and chronic diseases worsening with the camp’s conditions. The death toll on the island during its occupation seemed to exhibit a continuous climb as suicides, assaults, and medical emergencies increased in frequency as the crisis persisted.

The disappointing conduct of the Australian government, primarily, is a glaring indication of its impotence in its attempts to resolve issues of international importance. The events on Manus Island constituted the country’s largest refugee and humanitarian crisis in decades, and instead of accepting responsibility for its initial inability to successfully relocate its refugees to Lorengau and searching for alternate solutions it is seeking to escape its predicament by making it virtually anyone else’s problem.

To make matters worse, public protests urging the government to open Australia’s own doors to asylum seekers have gone effectively unheard by policymakers. Emma Cullen, spokeswoman for Peace Action Wellington, stated during a demonstration, “Australia has illegally detained these asylum-seekers for years now, and now they’ve essentially abandoned them and they’ve got no food, no water, no medicine, and no power…What Australia is doing is inhumane.” Policymakers’, and especially Prime Minister Malcolm Turnbull’s, refusal to respond to public opinion, as exhibited by their continued refusal to accept the men within Manus Island for internal settlement, only worsens the image of the Australian government. Additionally, efforts from outside actors to ameliorate the worsening situation, such as New Zealand Prime Minister Jacinda Ardern’s offer to accept 150 refugees, have been brushed aside by Turnbull.

Australia’s period of time under public scrutiny is far from over–or at least it should be. The Manus Island detention center may be successfully evacuated, but the country’s leaders are yet to legitimize their actions in the eyes of the international community. To say that the Australian government has irreparably failed these refugees would be extreme, but to say that the crisis was resolved with tact and respect for human rights would be affording it more credit than is due. In fact, the word “resolved” itself may be less appropriate than “evaded.”

Countries such as Australia do not frequently have political crises; they tend to remain more or less in the periphery regarding global matters, and are far enough out of the way politically and geographically that incidences in which migration in and out of the continent as a matter of necessity rather than luxury or convenience have been historically few and far between, regardless of their significance. In fact, virtually no boats carrying large volumes of refugees made it to Australian shores from 2002 to 2007. The refugees formerly on Manus Island accomplished the rare task of dragging Australia into the world’s spotlight and gave it an opportunity prove its ability to address the task at hand with competency, a task that unfortunately resulted in disappointment.

The refugee crisis, caused by instability in the middle East and Asia through matters like the persecution of the Rohingya and violence in the Middle East, calls upon Australia in this specific instance to step up to the role of benevolent hero. At a figurative crossroads, the government subsequently had the choice to craft its global image as one of either strong, reliable actor or apathetic and unaccommodating presence. In more specific terms, potential solutions to the situation included,as leading options, forceful removal and relocation in Lorengau (and similar camps), arrangements for safer accommodations elsewhere, and neglect and dismissal of the refugees’ health and safety needs. Despite what the Australian government may wish to believe, the first option is one of almost as much inaction as the third. Disregard for the voices of both refugees and those who defend their rights reveals a refusal to completely fulfill the role of a governing power.

Hopefully, the next step for Australian officials, specifically members of the Department of Immigration, is reconsideration and reform of its immigration policy and procedure regarding asylum seekers. The blunder that took place on Manus Island was in small part ameliorated by the assistance of foreign governments and it is still too soon to say definitively what the fate of the refugees relocated to other camps within PNG will be, so for now the Australian government seems to have avoided an entirely disastrous outcome. Should similar events occur in the future, Australia cannot and should not expect to be so fortunate. If PNG has proven itself to no longer be a suitable environment in which Australia can place its refugees, then it is the responsibility of the Australian government to either invest in improving the conditions at existing locations or seek opportunities for more qualified locations elsewhere.