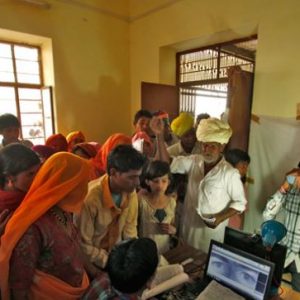 A Call for Caution: India’s Aadhaar

By Madhumitha Krishnan on February 9, 2018

India is a land of dualities. Venture into New Delhi, and one can see the smog create a portrait with the fiery sunset, hear the chimes of temple bells form a paean mixed with the deafening honks of the traffic, and experience order among a chaotic mass of people.India is a complex society that necessitates equally complex solutions.

The promises Aadhaar brings, of greater efficiency and the inclusion of millions of people for government facilities, are enough to sway even the most obstinate technology critic. The promises are great, but the practical methods in the collection and distribution of the information pose concerns. Because of the international scrutiny and civil liberties at risk, all facets and potential consequences of Aadhaar need to be considered. Aadhaar could shape a better India, but only if the Indian government first designates proper privacy limitations before commencing with such a program.

Other than the conspicuous conflict with privacy, the implementation of Aadhaar- which includes the collection and distribution of data- raises questions about the consequences that can arise due to such an exercise of power. Biopower, a term coined by Foucault, refers to the the practice of nation states and the management of their subjects. In his Histories of Sexuality, Foucault writes of this power as having “power over life”, either in “discipline of the body” or “regulation of the population”. Aadhar certainly falls under the use of biopower, as it aims to control the people on a statistical level and ensure a healthy workforce. Individuals are identified by a set number of attributes, and the categorization of persons by data leads to the body being the tool through which the government operates. Essentially, the people are expected to exchange their body to the government for security. As Professor Bhattacharjee at Ambedkar University argues , “It is an attempt to turn subjects into bodies that don’t resist the apparatus of dehumanisation.” This is not to say that Aadhaar shouldn’t be used, and there certainly is utility that comes with Aadhar. However, the people should have some agency over what their body and their biometric information is used for.

Till date, India has lacked a comprehensive registration system. Aadhaar, in creating a centralized database, can launch the country into the digital age and is certainly an economic measure. But, as with any new program, one has to consider the long standing implications. In being a leader, the country inadvertently sets the precedent that other nations will adapt to construct similar schemes. Imperfect application can result in gross privacy violations, especially in countries where the right to privacy has not been recognized. If Aadhaar is implemented properly, India is poised to assume a throne among the developing world.

There are exceedingly high expectations resting on this program, which may influence the government to disregard the negative aspects and continue its reckless implementation. The narrative of India’s dominant Bharatiya Janata Party (BJP), as well as many international organizations, portrays Aadhaar as a panacea for the country’s woes. In the World Development report of 2016, the World Bank proudly states that “…India’s Aadhaar, by overcoming complex information problems, helps willing governments promote the inclusion of disadvantaged groups.” Similarly, Nandan Nilekani, the lead in this program, argues that Aadhaar is a “great example of how governments can build the most modern digital public infrastructure, and make it available as a public good to everybody.” In a country where corruption and theft by public officials is rampant, it’s seen as a program that can save the government money, aid poverty reduction, increase accountability, and create a more efficient bureaucratic system.

While the aims of Aadhaar are legitimate, If the goal is to create a more advanced and modern India, then privacy must be prioritized. For any government to work to its full capacity, the public needs to feel safe, secure, and possess trust in the system. Any breach in civil liberties has a tendency to sever that trust, which is why it’s imperative that safeguards are in place.

The most recent Aadhaar case was in August 2017, where the Indian Supreme Court declared a “right to privacy” regarding the use of biometrics. The biometric collection involves a facial photo, 10 fingerprints, and two iris scans, all which are needed to obtain the card. The Court, taking provisions from western philosophy and case law, stated that

“…privacy is not lost or surrendered merely because the individual is in a public place. Privacy attaches to the person since it is an essential facet of the dignity of the human being”.

While this will ostensibly scale back programs, past Supreme Court decisions seem to have little influence on the government’s implementation of Aadhaar. The Supreme Court has ruled that the Aadhaar card can’t be mandated, yet there are exceptions which render the Court’s ruling ineffective. The Court has not recommended a set of guidelines on what would be a Constitutional approach to Aadhaar, leaving much of the changes to be the government’s prerogative. This has lead to very few changes at all. Aadhaar can still be required for mundane activities such as the creation of bank accounts, free cooking gas for poor women, water and social services, and targeted public distribution systems.

What’s most worrying is that the government has no legislation regarding malpractice, leaving citizens to be eaten by the wolves. Apar Gupta, a New Delhi-based Supreme Court lawyer litigating this case, is concerned with the lack of safety-net procedures. “If your data is compromised in any way, there is absolutely no where that you as a citizen can turn to,” he said. “There are no judicial remedies built into the Aadhaar program in case of identity theft.”

The right to privacy is a relatively new concept, and there is not sufficient legislation outlining government’s limits and its scope. The lack of legislation leaves this database ripe for abuse. This is not to say that the Indian government has malicious intent with the program, but allowing for sweeping collection of sensitive information sets dangerous precedent- any government in the future will be able to take advantage of this information.

Even if a “big brother” type enterprise seems far-fetched, the Aadhaar information is being made accessible to private corporations. With this information in the hands of private entities, ranging from hospitals to Microsoft, the government loses the full authority and accountability it has. There is no foolproof method in monitoring the actions of private corporations. To allow them access to this information can result in gross violations, and as argued by Gupta, currently there is no legal recourse. These are very real threats: over 120 million users’ Aadhaar information was leaked by the telecommunications company Reliance Jio. In a similar incident, the bank account and Aadhaar details of more than 100 people were disclosed through certain open-government portals.

What Can Be Done?

First and foremost, recognition of consent is important in preventing the government from overstepping its bounds. Aadhaar was originally meant to be an optional card, but consent has been more of a mirage than a principle the government abides by. Consent is grounded in the ability to choose, and the individual should be able to opt out of the card without facing significant ramifications. It seems that instead of total consent, the current implementation of the Aadhaar card reflects coercion. As Indian Member of Parliament Jairam Ramesh described, the program is “compulsorily mandatorily voluntary.” It should not be that refusing to give up such sensitive information leads to exemption from necessary government programs.

Consent also requires a certain amount of knowledge. It is absurd to assume that ordinary citizens, let alone vulnerable groups, will know exactly what their information is used for and who it’s accessible by. The assumption that all are fully aware of what they register for should not be the standard by which the government operates. It is not sufficient when one’s most personal self- their identity- is out in the open. Explicit and total consent is needed, and that is only possible when an individual knows a considerable amount about the system.

The government can offer more education on Aadhaar, the India Stack, and where information is being used. When an individual applies for the card, they should be aware of where their information is going and who it will be given to, along with the potential consequences of surrendering this information.

Individuals should also be given some choice as to what biometric data they are willing to release. If a person does not want to give up their fingerprint or eye scan, they should be able to opt out, and instead provide supplementary forms of ID or alternate proofs of identity.

The BJP party and Aadhaar supporters have depicted Aadhaar as a simple solution to many of India’s perplexing dilemmas. An unwarranted intrusion in privacy is simply seen as a necessary means, rather than something that should be curtailed. The tug-of-war that occurs between privacy and advancement of technology is perennial, but privacy concerns should not be simply brushed off as a side effect of progressive implementation of tech. As India paves its way to the future, it must remember not to leave its civil liberty protections behind.