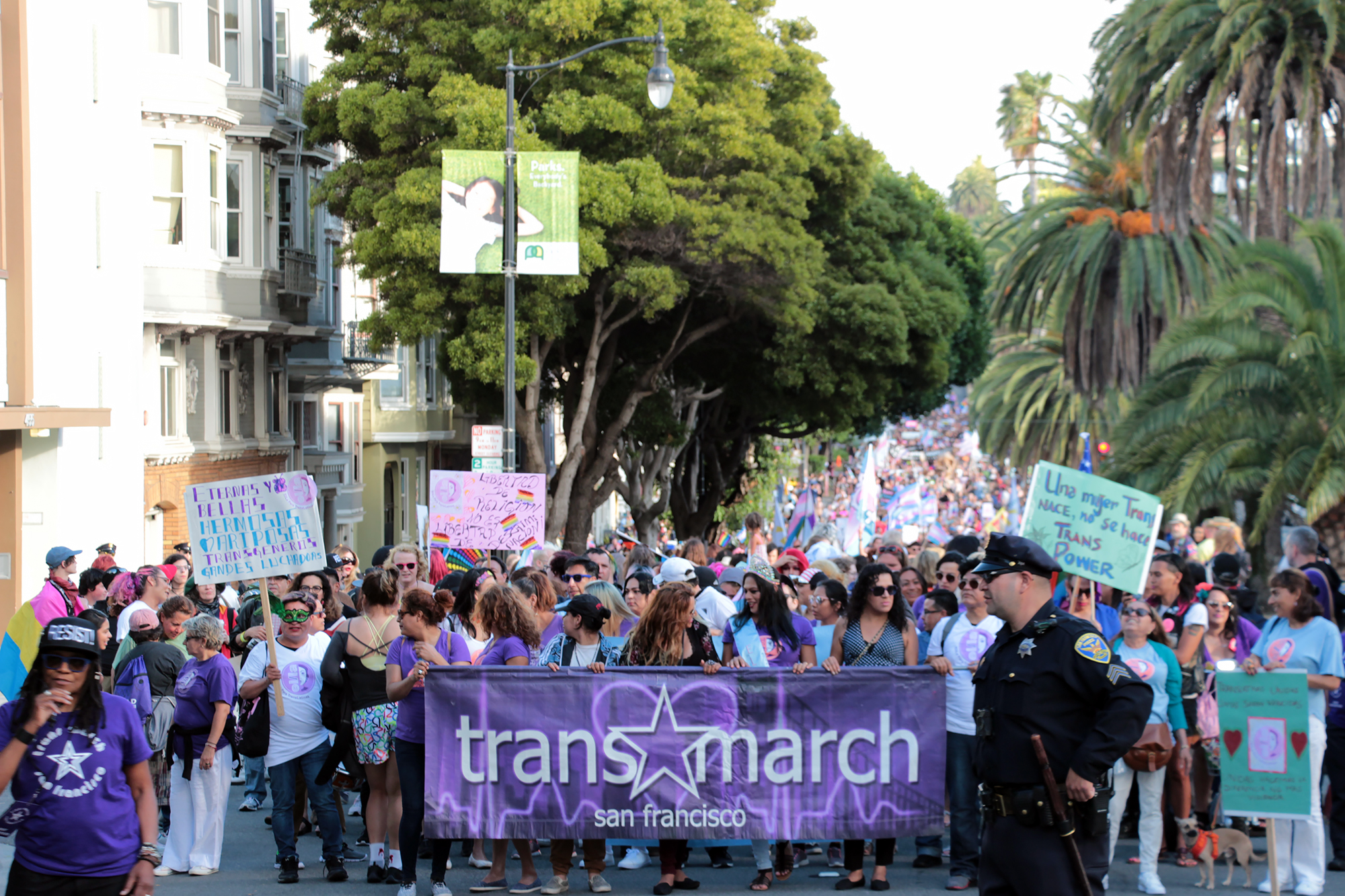 Male or Female. Check one. A perfunctory flick of the wrist, and onto the next question. For many, filling out government forms constitutes a mechanical, mind-numbing experience, about as intellectually stimulating as watching paint dry. Yet the empty boxes awaiting their desired check mark are not so innocuous as many assume. They compose a restrictive political statement and lead to a gut-wrenching, identity-erasing experience for thousands of Californians. How do you mark ‘Male’ or ‘Female’ when you don’t identify with either? On October 15th, California became the first state to answer this question, by making it legally mandatory to have a third gender option on state documentation.

The “Gender Recognition Act,” originally Senate Bill 179, will go into effect on September 1, 2018. The bill was originally presented to Governor Brown on September 20th, and dangled precariously over veto purgatory (where bills go to die) for nearly a month. Authored by State Senator Toni Atkins, the bill received support from key figures in the State Legislature, with Senator Scott Weiner signing on as a lead co-author, and Majority Whip Nancy Skinner and President Pro Tempore Kevin De León signing on as principal co-authors.

Once implemented, the Gender Recognition Act will inaugurate significant changes for transgender and nonbinary residents of California. A quick language explanation, for anyone unclear on the dynamic field of gender terminology (these very definitions may be arcane by the time this article is published): transgender means that someone does not identify with the gender assigned to them at birth –– they may identify as a man, a woman, or neither, which previously, was quite challenging to have reflected on a birth certificate; nonbinary means that someone doesn’t identify as a man or a woman. This was documentarily impossible in California prior to the existence of SB 179, given that only ‘male’ and ‘female’ markers were available on state papers.

The Gender Recognition Act ushers in a few important changes to the otherwise dreaded sublunary world of government documentation and procedure. The law not only adds a third nonbinary gender marker onto state documentation, such as driver’s licenses and birth certificates, but also makes the process of gender transition far simpler. Gender transition has historically been expensive, time-consuming, and unnecessarily burdensome. Previous law required a court appearance by the person transitioning as well as a sworn physician’s statement that the appellant had undergone medical treatment to transition. The Gender Recognition Act struck down these requirements and made it possible for individuals under the age of 18 to transition with parental or guardian consent.

The law received fairly significant pushback from all sides as it migrated from Atkins’ office to Governor Brown’s desk. Stumbling blocks began in the Assembly Appropriations Committee, which oversees the financial feasibility of legislation. There, SB 179 was temporarily relegated to the suspense file, a de facto legislative holding cell for bills with major fiscal impacts. When placed in suspense, bills must wait patiently either for approval or for the unforgiving seal of death. The Gender Recognition Act survived the suspense file, despite entailing a sweeping overhaul of existing documentation: it requires new labels, new processing, and possibly new staff for thousands of identity documents.

Most of the fight, as one might guess, was not over the cost of the bill, but rather over its ideological implications. In an article for Breitbart, California Assemblyperson Tim Donnelly worried that SB 179 was an outgrowth of the “transgender movement.” He quoted Greg Burt of the California Family Council, a conservative Christian nonprofit, asserting that, “If you change sex to be a description of someone’s feelings, then anyone can claim to be a male or female.” Randy Thomasson, head of the conservative organization SaveCalifornia.com, echoed a similar sentiment, stating that “Science and God’s word agree you’re either male or female, not in-between.”

Jonathan Keller, president of California Family Council, a conservative Christian non-profit, expressed concerns about California eliminating medical treatment for gender transition. In a commentary piece for The San Diego Union Tribune, Keller criticized the Gender Recognition Act for treating gender transition as, “a mere legal formality, not the radical and life-altering decision it truly is.”

Granted, medical transition is not financially accessible for many transgender and nonbinary individuals, given that medical procedures can cost upwards of $100,000, according to Time Magazine. The same article cited a report by the Center for American Progress which stated that 15% of transgender individuals “make less than $10,000 a year, quadruple the average poverty rate.” According to the U.S. Census Bureau’s American Community Survey, the median income for California residents in 2015 was $64,500, which may signal that $100,000 in medical costs would be entirely inaccessible for an average California resident. Even for a person making above the median income, thousands of dollars of medical treatment is hugely exacting, particularly given that gender reassignment surgery is often denied by Medi-Cal. Moreover, not all transgender or nonbinary individuals want to medically transition.

There is, however, an elephant in the room beyond concerns about cost, medical treatment, and liberal parents pushing gender-bending agendas. Much of the pushback operates as a thin veil for discrimination towards transgender and nonbinary individuals. Keller’s final argument, and greatest concern, was that the law would, “endanger the women and children in California through lack of safeguards.” He failed to fully explain what he meant by this last point, but it implies and reinscribes fears of trans and nonbinary people as perverts and pedophiles.

Until 2013, the Diagnostic and Statistical Manual (DSM) of Mental Disorders classified transgender identity as a mental illness, similar to how homosexuality was classified as an illness until 1973. A fair amount of the concern centers on bathrooms and locker rooms, with people fearing that transgender and nonbinary people are actually perverted men seeking to attack women and girls. Matt Walsh, a columnist for TheBlaze, criticized liberals on Twitter, stating, “Liberals: ‘Men are dangerous rapists.’ Also liberals: ‘Men should go in girl locker rooms.’” Despite the highly vocal and extensive propagation of this ‘bathroom threat’ sentiment, in the last 35 years, there has been only one reported case of a transgender person attacking someone in a bathroom.

Moreover, Time Magazine reported that “nearly 70% of transgender people… experienced verbal harassment in a situation involving gender-segregated bathrooms.” Studies have shown that nearly half of transgender individuals experience sexual assault at some point in their lifetimes. Some elements of transphobia may also be generationally-linked, as National Geographic cited a recent survey which found that half of millennials believe gender is a spectrum. Fear of nonbinary individuals as predators lacks basis in any empirical evidence and ignores the rates at which nonbinary people experience elevated rates of victimization and assault. The Gender Recognition Act accompanies a new generation full of unbridled idealism and changing definitions (as with any and all newer and younger generations). Over time, it may help dispel discriminatory notions of what nonbinary people are and are not.

It’s important to recognize that this law is not merely symbolic of increasing acceptance. It’s not just about semantics, political correctness, or pushing a purported liberal agenda. The Gender Recognition Act will tangibly improve thousands of lives in California, and will give California the means of more accurately assessing its gender demographics. And, as pioneering California legislation is known to do, SB 179’s success may inspire similar legislation elsewhere, setting a precedent for acceptance and inclusion across the country. If nothing else, the Gender Recognition Act evidences that this is a new era for how we define identity and who belongs. In September of 2018, documentation will radically change, making the perfunctory checking-of-the-boxes a revolutionary victory for nonbinary individuals. And someday, hopefully not too far in the future, transgender and nonbinary Californians will get to enjoy the simple privilege of boredom when marking their gender on state documentation.