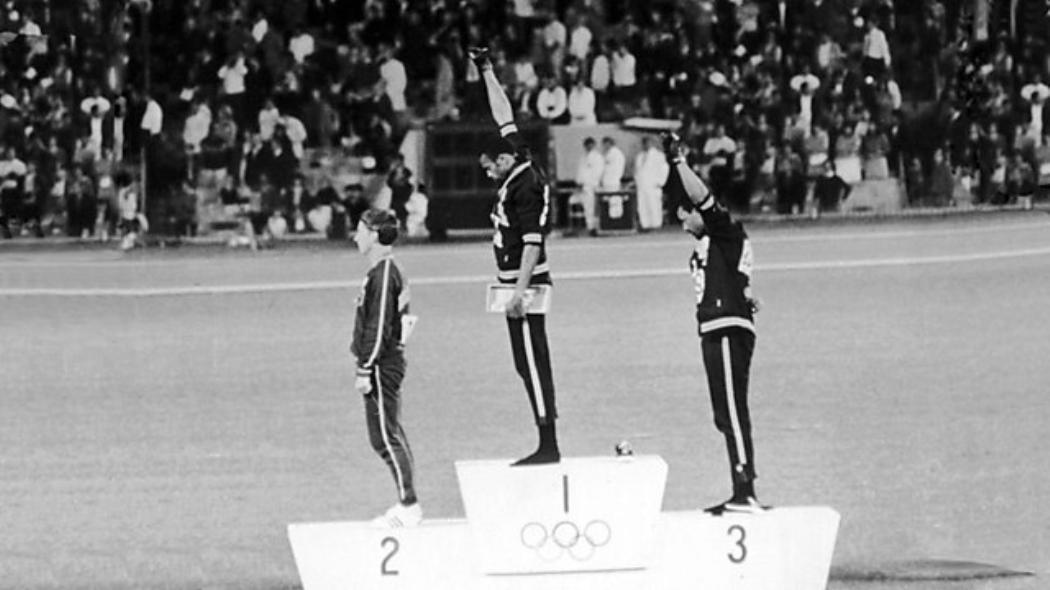 It was the medal ceremony for the men’s 200-meter sprint at the 1968 Olympic Games in Mexico. American sprinters, Tommie Smith and John Carlos, stood on the podium to receive their medals, but something was off in their appearance. On their feet, they had on black socks, but no shoes, and on their hands they had on black gloves. The national anthem began to play and in the view of the thousands of spectators in the stadium and millions at home, Smith and Carlos bowed their heads and solemnly raised their fists into the air.

Even while abroad, Smith and Carlos used their platform to bring attention to the Black Power Movement back home in the US. In 1968, the Black Power Movement was becoming a powerful political and social movement within the U.S.. Militant organizations, like the Black Panther party, began to form and promote the idea of “black power” which advocated for racial pride, self-sufficiency, and equality for all African-Americans. Thus, Smith and Carlos wore black socks to portray African-American poverty and black gloves to show African-American strength and unity. This act, however, was not without consequences. The International Olympic Committee pressured the U.S. Olympic Committee to suspend Smith and Carlos from the games. Furthermore, they were booed and jeered at, faced death threats, and were shunned by the athletic community.

Today, we see that sports and politics are still intertwined. The most recent controversy arose when San Francisco 49er Colin Kaepernick knelt during the national anthem in protest of police brutality against African Americans. Athletes have used and are continuing to use their platforms throughout varying political contexts to not just  bring attention to important social issues, but to help push towards positive change.

In 1947, Jackie Robinson led the way for racial integration of baseball when he joined the Brooklyn Dodgers as the first African American to join a Major League Baseball team. Robinson joined the Dodgers under the condition that he would not respond to any of the racism he would face. Thus, even through all the racism, hate mail, and death threats, he did not respond and silently protested racial segregation through his presence and success in the Major Leagues. Robinson’s success in the Major Leagues encouraged integration in other sports leagues as African American athletes began to challenge the notion of “separate but equal.” After they hired Robinson, the Dodgers also brought in other African-Americans players —  Don Newcombe, Joe Black, Roy Campanella, Jim Gilliam, and Sandy Amoros. The “Jackie Robinson experiment” showed that successful desegregation in a major American sports league was possible. Martin Luther King Jr. also told Newcombe, “You’ll never know what you and Jackie and Roy did to make it possible to do my job.” Furthermore, even after his time in baseball, Robinson fought for civil rights, viewing his fame as a platform from which to challenge racism. In the 1960s, in a series of letters, Robinson pressured President Kennedy to take action on civil rights. Along with other political pressures, President Kennedy eventually delivered a landmark speech introducing the Civil Rights Act, later to be signed in 1964 by the Johnson Administration. Even in a time where racism was still deeply rooted in America and even before the Civil Rights Movement, Jackie Robinson used the trend of racial integration of sports to demonstrate the possibility of desegregation and the need for equality.

In 1966, during the peak of the Vietnam War, the famous boxer Muhammad Ali protested the war and racial injustice by refusing to enlist in the draft. Though Ali’s refusal to go to war was centered around beliefs as a Muslim, it was also about refusing to fight for a country which treated him and other African Americans unjustly. In an interview, Ali protested, “‘And shoot them for what? They never called me nigger, they never lynched me, they didn’t put no dogs on men, they didn’t rob me of my nationality, rape and kill my mother and father.’” This became a highly controversial issue because it was during a stage of the Vietnam War when there was widespread support from the public. As a result, Ali became a “national pariah,” with those in the media considering him to be a “simplistic fool and a pawn.” Ali was also stripped of his boxing license and was arrested and convicted for refusing to go to war. Ali stood his ground, however, and stated that he would not fight for what “my negroes don’t have” and that the white people were his real enemies, the “opposer” to his freedom, equality, and justice. As the Vietnam War progressed, Ali’s refusal to go to war “coincided with the war’s growing unpopularity” in the U.S.. During these years, he gave many speeches at colleges and universities protesting the war and the injustice of the U.S. in sending troops to Vietnam while denying African Americans “human rights.” In this way, Ali became crucial figure who united the black liberation movement with the anti-war movement, paving the way for leaders like Martin L. King, Jr. Ali even inspired other athletes and groups within the Black Power Movement. For example, John Carlos and Tommie Smith called Ali the “warrior-saint of the Black Athlete’s Revolt” and the Black Panther Party adopted his slogan: “WE are the Greatest.” Thus, Ali’s protest of the war not only illustrated the injustice of the U.S. towards African Americans, but also inspired civil rights leaders and other African American athletes.

For Smith and Carlos, they brought attention to the injustices and racism in the U.S. during the Black Power Movement. While they were competing in Mexico, there were still attempts to suppress civil rights in the U.S., as seen through the assassination of Martin L. King Jr, in 1968. Thus, their protest became a symbol of black power, pointing to the need for unity of African Americans in their fight for justice. Furthermore, their protest is important for its legacy in inspiring today’s athletes. Reflecting on the past, Carlos stated that “We planted seeds and we nourished them and watered them and returned them to earth. The young athletes making these statements, they are the fruit of our labor.” In 2016, both Smith and Carlos were invited to the White House to help the U.S. Olympic Committee in their efforts towards greater diversity and inclusion in sports.

Today, we see a parallel between the Black Power Movement of the 1960s and 1970s and the protests of athletes like Colin Kaepernick, along with the Black Lives Matter movement, as they protest the injustice of the police shootings of unarmed African Americans. In a press meeting, Kaepernick stated, “I am not going to stand up to show pride in a flag for a country that oppresses black people and people of color.” This led to criticism not only from the public and NFL fans, but also from President Trump who called the NFL players a “son of a bitch” and said that they should be suspended for disrespecting the flag. Though the public and President Trump see the act of kneeling as a disrespect of the flag, Kaepernick and his fellow teammate Eric Reid believe otherwise. According to Reid, they knelt to represent a flag flying at half-mast, marking a tragedy.

Still, others have criticized Kaepernick for not taking any meaningful action. Former athletes like Charles Barkley stated, “I challenge all these guys. What are they actually doing to help the cause? You can raise a fist, you can take a knee, but what are you actually doing to help the problem?” Others like basketball player Carmelo Anthony stated, “‘I’m past the gestures. I’m past that. It’s all about creating things now and putting things in motion. So that’s what I’m on.”

Though some believe that Kaepernick is unreasonable in his actions, others see his actions as central to a movement that has led to positive steps in combating racial inequalities. They believe that Kaepernick’s actions have brought more attention to the issue of race and police violence, inspiring other football players to  kneel during the national anthem in solidarity with Kaepernick. Furthermore, the 49ers franchise announced that they would be donating $1 million to “the cause of improving racial and economic inequality and fostering communication and collaboration between law enforcement and the communities” in the Bay Area. Basketball star Michael Jordan also donated $1 million to the NAACP Legal Defense Fund and the International Association of Chiefs of Police’s Institute for Community-Police Relations. Like Robinson, Ali, and Carlos and Smith, Kaepernick is bringing a light and a voice to the systemic injustices in our society. As Eric Reid stated, they hope to be “remembered for standing for what was right, even though it was not the popular or easy choice.”