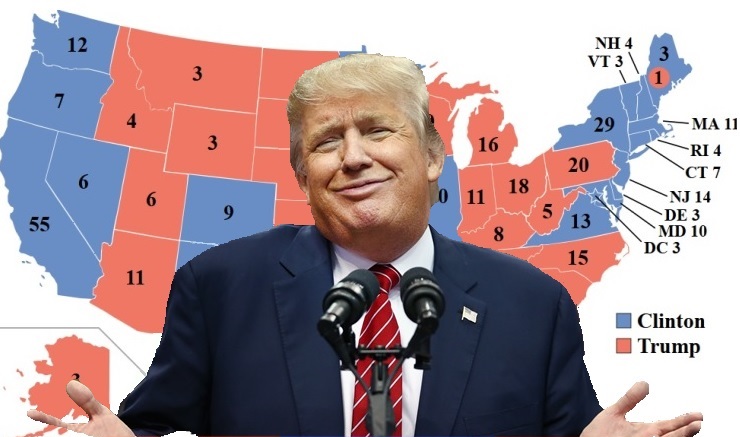 In Defense of the Electoral College

On Tuesday, November 6th, 2016, two things occurred: Donald Trump became President, and the Electoral College became the most reviled appendage of the American body-politic. Why? Because the two are linked –– ultimately, Mr. Trump is the putatively illegitimate child of an old and puzzling institution, one that abjures direct democracy and instead places trust in a clique of 538 electors, merely pledged to represent the interest of their states.

So, why defend it? To understand the necessity of the Electoral College (EC), it is imperative to unearth its roots. In Federalist No. 68, one of 11 essays written in defense of the Constitution, Alexander Hamilton remarked that the chief executive should be selected by several men from each state with no “governmental position, nor holdings of trust or profit under the United States.” These electors, Hamilton supposed, would be most likely to have “the information and discernment” necessary to select an ideal candidate and to avoid the election of anyone “not in an eminent degree endowed with the requisite qualifications.”

This procedure –– as articulated by Mr. Hamilton and the rest of the framers –– has remained largely intact, save a few exceptions: originally, the President and Vice President were not on the same ticket; it would not be until after the passage of the 12th Amendment that voters could actually select a party-affiliated slate (i.e. a Jefferson/Burr ticket) rather than having to choose individual candidates (i.e. Jefferson, Adams, or Burr). Prior to this modification, the electors would ordain the candidate with the most votes, President, and the runner-up, Vice President.

Why this system endures is as contentious as it is complex. The reason the framers initially sought such a system was multifactorial: men, like John Adams, had long been suspicious of direct democracies such as the Athenian system, which they found fleeting and susceptible to “majoritarian tyranny.” Second, the framers were acutely aware of the geographical constraints of their nascent state; they could not possibly expect the average voter to be well-in tune to the political happenings of an electoral circus days, if not weeks, away by horse-and-buggy. Third, which I suppose dovetails the first consideration, they did not seem entirely confident in the populace’s resolve and objectivity in the face of a foreigner/Manchurian Candidate –– a candidate, backed by a foreign government, that would seduce the American voter base in order to subsequently exploit and undermine our nation. Finally, the framers sought to found a system free of parochial constraints and regional tyranny –– wherein certain states could deliver a decisive result by virtue of their mass, thus marginalizing the concerns of the nation’s smaller states. In short, the Electoral College was a fail-safe.

Despite these arguments, there has been no shortage of skepticism. The EC’s detractors spurn such considerations as antiquated, bigoted or inequitable. For instance, the notion that the nation’s citizens are sufficiently far-removed from the electoral process such that they could not render an informed decision is a vestige of the past, if not a patronizing insult to the average voter’s IQ. Further, many critics point out that one of the main historical drivers of the EC was slavery. Primarily Virginia-born blue-bloods, the framers were not keen on letting the North dictate their nation’s policy agenda –– an almost certainty had the nation been governed by a true, direct democracy. As Time columnist Akhil Amar editorialized, “in a direct election system, the North would outnumber the South, whose many slaves (more than half a million in all) of course could not vote. But the Electoral College — a prototype of which Madison proposed in this same speech — instead let each southern state count its slaves, albeit with a two-fifths discount, in computing its share of the overall count.”

Additional points of contention challenge the inequity of the current system. Because the EC is tallied by summing a state’s total number of congressional representatives, certain smaller states (think Wyoming) and border states (think Florida and Ohio) gain a competitive advantage that would otherwise be absent. In truth, this inequality is not fictive –– California’s electors are worth ~510k votes each; Wyoming’s – just shy of 143k votes per elector. That Wyoming voters should have an almost 5x greater “say” in an electoral outcome is unacceptable for many prospective voters.

Could it be true that times have changed? That the EC is simply another cog in our electoral machine? It seems unlikely. Adams was right to fear direct democracies. Even today, they are rare sights to behold. The only nations that govern accordingly are Switzerland and Greece –– the latter barely clings to this title. History is no fan of this system either. Since time-immemorial, few nation states have ventured into its territory, the most famous of which being Greece. Yet, even authentic “Athenian Democracy” was short-lived. The STOA consortium (an electronic publication that focuses on Classical Research) estimates that the direct democracy that is conjured when talking about the “Athenian System” lasted no more than 186 years.

However, one should be careful to distinguish between a direct democracy that entails a slew of supplemental protocols and democratic procedures, and a “direct election,” which merely mandates the anointment of the Commander-in-Chief by popular vote. Still, the proposal holds little merit. If we were to elect the President by popular vote, then his/her ascension would be primarily dictated by four states: California, Florida, New York, and Texas. In total, these four states would contribute more than 30% of the total vote count. Though it is true that presidential hopefuls already spend much of their campaign in only a few states, this would radically tip the scales –– a move that would lead to the exact kind of parochial nightmare that the founders feared would inspire civil discord.

More reasonable critiques remind that EC is moribund regardless; in many states, electors would face fines and other draconian penalties, if they were to defect. Perhaps, this is why faithless electors are virtually non-existent –– there have been 167 faithless votes cast since our nation’s inception; never once has a faithless electors decided an election. This, too, is complicated. Although electors have yet to exercise their constitutional exigency, this should not compel us to forget their role as the only electoral fail-safe, aside from impeachment. In the event that our electoral system is compromised –– a reality not as far-fetched as one might suspect in the digital-age –– they are our first-line of defense.

In summary, the electoral college remains a keystone institution. Though its role has been obscured in recent years, its purpose is no less vital. If the nation were to lose this institution, it’s likely to arouse civil strife and permanently fracture the integrity of our electoral system.