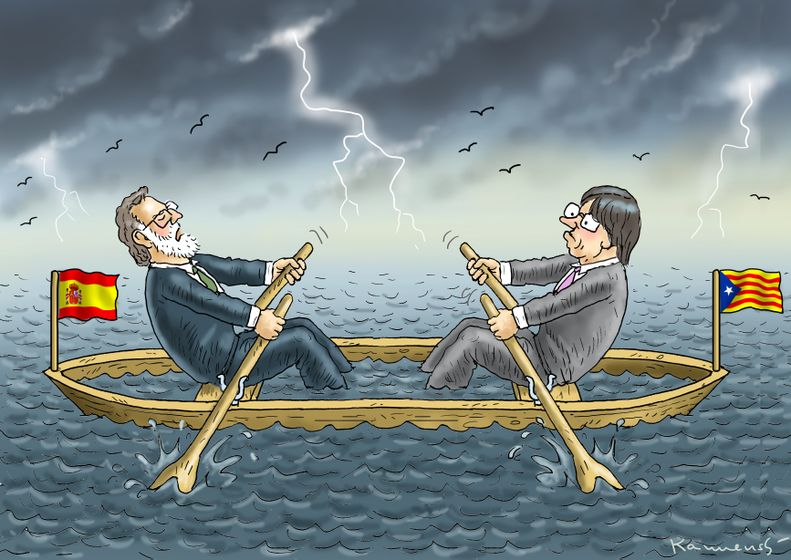 If he negotiates, he loses. If he uses force, he loses. Spanish Prime Minister Mariano Rajoy has dug himself a into a hole where the only remaining options are to give something up– either relinquish control over an ever-more powerful Catalonia, or risk the consequences of losing democratic legitimacy. Since the referendum on October 1st, the political drama in Catalonia has steadily escalated. After unsuccessful negotiations between Barcelona and Madrid, the Catalan parliament unilaterally declared independence on October 17th. Madrid responded by invoking Article 155 of the Spanish constitution for the first time in history, which dissolved the Catalan parliament and dismissed the current President, Carles Puigdemont. Eight former Catalan ministers were called to Madrid to report to court there on charges of sedition and rebellion, offenses punishable for up to 15 and 25 years. Instead of reporting to Madrid, Puigdemont and five members of his cabinet have successfully sought asylum in Belgium. Now, even the Kremlin is being brought into the mix, with claims that a Russian disinformation cyber campaign supported the independence movement in hopes of undermining the EU. It has been an incredibly historic, exciting, and traumatic month for Catalonia.

Has Spanish Prime Minister Mariano Rajoy’s strong-handed response been successful in dealing with Catalonia? Critics would argue that, instead, his actions have not only backfired, but have been the strongest legitimizing factor in the Catalan independence movement by adding to the narrative that Catalans are victims of oppression.

Rajoy’s actions directly contradict what Professor Scott L. Greer, a political scientist who specializes in Spanish political history, characterizes as the ‘rules of the game’. Since the end of Franco’s military dictatorship, Spanish politics have followed a pattern: “the game would start with dramatic claims, divert into dialogue and end in complex pacts,” which is exactly what happened in the creation of the Spanish Constitution in 1978 and the initial statute of autonomy for Catalonia. Rajoy, on the other hand, has rejected these rules every step of the way, opting for confrontation and escalation of conflicts. He did this first by contesting and overturning the Catalan Statute of Autonomy in a Constitutional Tribunal in 2010, then by removing Artur Mas, a former president of Catalonia. Since the announcement of the referendum, he’s used the same moves. Instead of simply letting the referendum happen, and likely fail, Rajoy sent in thousands of police to intimidate voters and brutally prevent people from turning in ballots, pushing the plight of Catalonian independence to international headlines. Instead of taking the high road after the referendum and negotiating with Puigdemont, he court-ordered pre-trial detentions of Catalan politicians on the grounds of sedition and incitement of violence and caused Puigdemont and some other cabinet members to flee the country seeking political asylum. An issue that had been dormant for decades, essentially solved by the statute of autonomy, was unnecessarily escalated into one of, if not the largest, political crisis in Spain’s modern history.

Rajoy’s actions also reflect poorly on western European democracy as a whole– Spain is now a country where police brutality against citizens is encouraged and where opposition politicians are silenced by political imprisonment on overstated charges of sedition and rebellion. This has only added fuel to the fire for similar independence movements. It is no mistake that the man responsible for granting Puigdemont and his ministers asylum, Theo Francken, is himself the head of the New Flemish Alliance, a Flemish independence party. Other democratic European countries will find it more and more difficult to stay silent on the issue of Catalonia, and sooner or later, the European Union will also have to take a stand and decide whether or not it tolerates pro-European leaders with anti-democratic tendencies, like Rajoy.

This opens a larger discussion of how victims gain voices. In Europe especially, recent political rhetoric surrounding both right- and left-wing populist parties have relied on different victimization narratives, and Catalonia is no exception. Secessionist and independence movements seem to gaining much more legitimacy than they had previously during the period of European integration. Nationalism, populism, and independence movements have become a hot topic– but perhaps because of this, its causes and effects have been overgeneralized or exaggerated. Laia Balcells, a Catalan political science researcher, investigated the link between victimization, nationalism, and political activism in different regions of Spain throughout the 20th and 21st centuries. She finds that violence and victimization lead to a “rejection of the political identity of the perpetrators,” across even generations who haven’t experienced such violence. This would help to explain the existence of a separate ‘Catalan’ identity over ‘Spanish’, something which is felt very strongly in Catalonia. However, she does not find a causal link between victimization and increased political participation or activism over the long-term. The victimization narrative on its own, then, is not enough to explain the level of support for the Catalonian independence movement, and similar secessionist movements within Europe.

So what does explain it? I would argue that media has had a profound effect on elevating national and international support. Not only do international headlines undoubtedly increase the general hype, but Catalonia has been grouped together with other EU-skeptic events, like Brexit and the French elections. While there are the superficial similarities putting the EU into question, it is obvious that the immigration-motivated Brexit and Catalonia’s desire for independence from Spain fundamentally differ– but it’s easier for journalists to write a sexy article stoking fears about EU disintegration rather than writing about less interesting individual elections. As I wrote previously, I also think that Catalan politicians have taken this independence movement and co-opted it for their own short-term political gains. Independence was the only thing holding the ruling Catalan coalition together. Rajoy’s heavy-handed response to the issue is indicative of a similar strategy: he can rally support on the issue of Catalonia, instead of having to publicly deal with less-easily-solved economic hardships and social issues.

WINNING THE BATTLE, LOSING THE WAR

Rajoy may have succeeded in ousting the Catalan government for now, but he has only ‘poked the bear’ and given both incentive and voice to other independence movements on the continent. What is happening in Catalonia is about more than just the victimization narrative– it is a combination of incendiary journalism and political opportunism with an unsettlingly real violation of democratic principles. The plight of Catalonia now should be troubling to any democratic government– police brutality and political prisoners are not characteristics of a functioning democracy. EU states especially should be more actively denouncing Rajoy’s actions to signal to other independence movements that the EU is committed to protecting democracy within its borders. The world is watching, and will not wait forever for an answer.