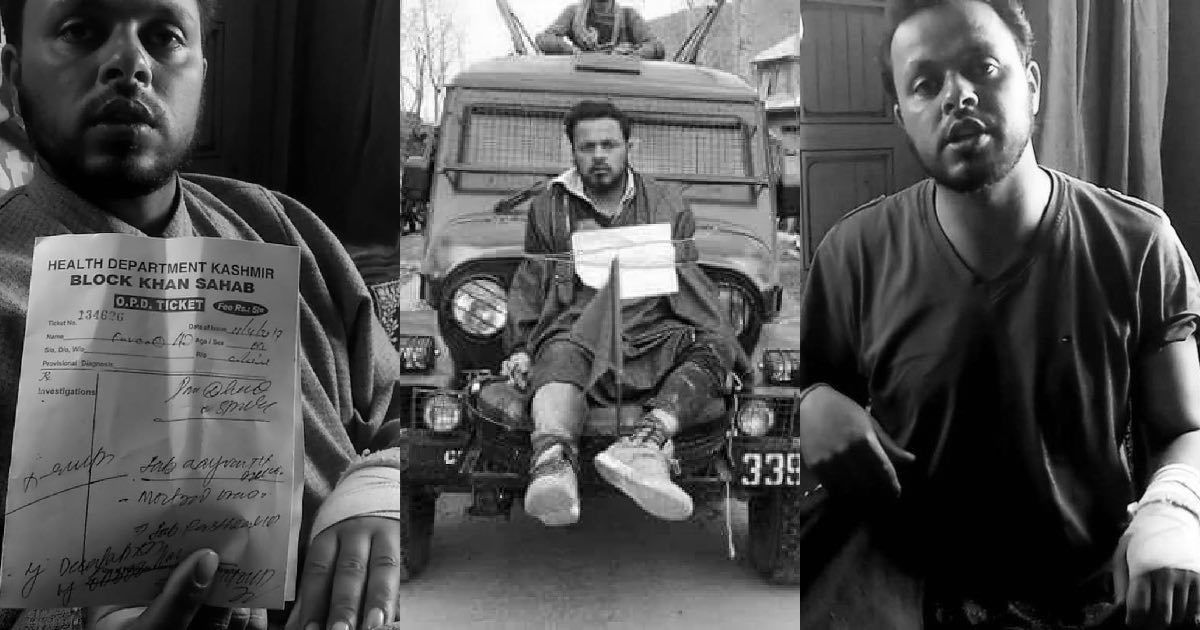 Picture this: a young man, branded with a nondescript sign on his chest, being paraded through villages and neighbourhoods as he only just manages to stay on the jeep that he has been so carelessly tied to.

The use of civilians as ‘human shields’ in times of conflict and war is not novel or particular to Kashmir. During the Second Intifada in the early 2000s, the Israeli military used Palestinian civilians – with little to no regard for their innocence – as human shields in various ways. They were often coerced into performing tasks that ranged from searching for explosives or traps to removing suspicious objects on the road that the Israeli military would not touch themselves. In April of this year, ISIS was found to be deploying civilians as human shields as well.

The use of human shields is considered a war crime under the Third Geneva Convention (with respect to prisoners of war), the Fourth Geneva Convention (with respect to protected civilians) and Additional Protocol I. However, at best this is merely covered as a “norm” in international law, which doesn’t exactly prohibit their use. It instead posits that the use of human shields is in direct violation of a person’s right to live, free of torture.This often proves to be a flimsy argument when up against the seemingly air-tight position of “self-defence”.

Regardless of one’s innocence or culpability, the use of human beings as actual shields is morally indefensible. To take a gamble on a powerless civilian’s life calls into question the use of human shields for absolute self defence. Human shields are unequivocally instruments of pure humiliation, and are a mode to display power. What truly makes the use of human shields as terrifying and as dehumanising as they are is the intention behind their use and the blatant abuse of power they represent.

It’s difficult to trust whether or not human shields are used solely for the purpose of self defence. Local sources on the ground will say one thing and the military another. Beyond that, it’s also challenging, yet crucial, to determine if the situation was dire enough to even call for such a drastic tactic. But, all of this is besides the point. The use of an unarmed and unprotected human being as a first point of defence against stone pelting, bombs, fire etc. should not be up for debate. This is especially disquieting considering these scenarios are exactly what civilians try their best to avoid.

The parallels that can be drawn between Kashmir and Palestine are astounding. The similar contexts within which both the soldiers and the civilians exist allows for very similar dynamics. For Israeli and Indian civil society and military, viewing Palestinians and Kashmiris, (especially Kashmiri Muslims) as “less than” or antithetical to their identity is almost inevitable. With years of indoctrination and tensions, this behaviour is almost natural. To “other” the Palestinian and the Kashmiri Muslim – to posit them as antagonistic to everything that Israel and India stand for – is to reduce them to things that can be used in the line of conflict without hesitation. It bolsters the argument for the use of people as ‘human shields’ if they are made out to be enemies of the state and everything it stands for.

The most recent case of Farooq Ahmad Dar, a young shawl weaver from Gundipora in Indian-administered Kashmir, speaks to such dehumanisation: “I wonder whether tying a person to a jeep are [Major Gogoi’s] efforts in counter-insurgency operation.”

The Srinagar parliamentary by-elections were held on April 9th of this year. Public scepticism of such elections permeated the air, given that civil and political rights are suppressed  daily by the occupying Indian forces. Dar was leaving a polling station after having voted and was on his way to his brother-in-law’s house when he was stopped in the village of Gampora. Protests against the election had broken out and were being quelled by government and army personnel summoned on the scene. Wrongfully believed to be instigating the crowd and encouraging protests, Dar was picked up by the Indian army, beaten, and then tied to the front end of an army jeep.

Major Gogoi on the other hand had an entirely polarising perspective on his use of Dar as a shield. By tying Dar to the front of a jeep, Major Gogoi was able to safely and swiftly remove himself and eleven others – four polling officials and seven Indo-Tibetan Border Police personnel – from an escalating riot situation at a polling station.

Major Gogoi’s claim is that Dar was instigating the crowd of stone pelters that had endangered the government personnel that had arrived there to quell a possibly volatile situation. But, Dar, who voted in the elections that took place that day, claims he was on his way to a funeral in a  neighbouring village and was not concerned about being picked up, considering he’d just voted. He thought his faith in nationally mandated elections would protect him, but once perceived as an “enemy of the state,” always an “enemy of the state.”

These differing claims call attention to a lot of other potholes in Gogoi’s account. If this was really for self defence as Gogoi claims, why was Dar paraded through several villages for hours? How much time does it take to get away from a rioting mob, in a jeep that consists of soldiers equipped with guns? What was the purpose of the sign across Dar’s chest? If this was merely a self-defence tactic and not a punitive one, why, in a video that surfaced a week from the incident, was someone heard saying “all stone pelters would meet the same fate”? If this was merely to defend the personnel in the jeep and get out of a dangerous situation, why write out something presumably humiliating given that the army personnel were in a time crunch?

But none of these questions mean anything when Gogoi can leave from this ordeal with a medal, while Dar has to deal with the generational, emotional and physical consequences of having being used as a human shield. It’s one thing to claim that human shields are used in self defence, which may even be slightly defensible if they were, yet even then, where do we draw the line with self-defence? Who is to say that self defence doesn’t come at any cost at all? The alleged protection of a soldier in a dangerous situation automatically translates to the lack of protection for a civilian in the same situation. It’s almost as if we have decided one type of life deserves to exist and the other doesn’t, as if there weren’t already any precedent for that.