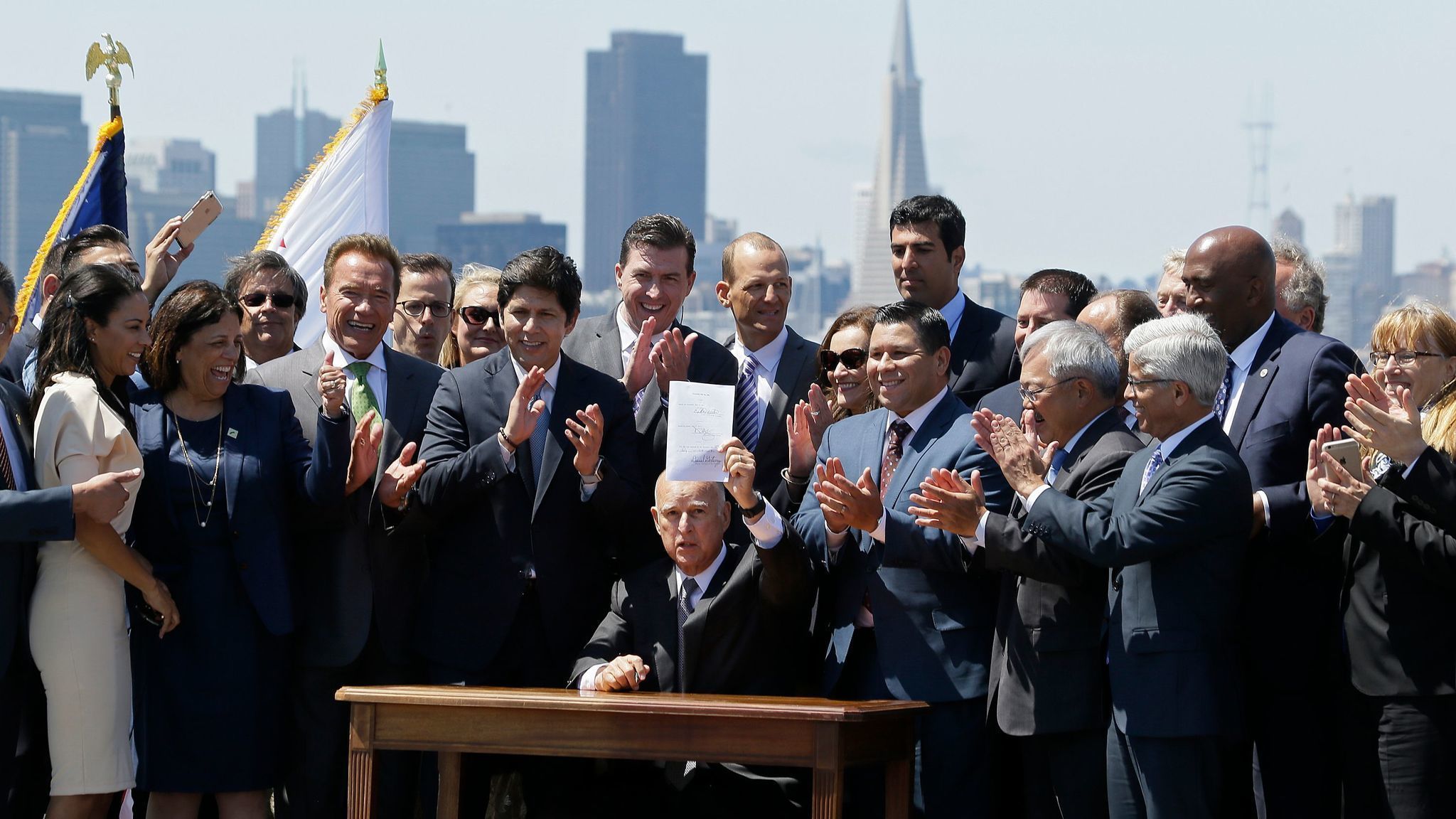 On September 25, 2017, Governor Jerry Brown signed into law a bill to move California’s primaries to March 3 for the 2020 presidential election, as opposed to June, the previous default. Though California’s primary will still be after the first caucuses and primaries held by Iowa and New Hampshire, California politicians are hoping that by moving California’s primary to Super Tuesday, California would have a greater influence in the presidential election. Super Tuesday refers to a Tuesday held early in the presidential election year in which the greatest number of states hold their primaries, assigning more delegates to the presidential nominating convention than on any other day. California Secretary of State, Alex Padilla supported this action, stating “candidates will not be able to ignore the largest, most diverse state in the nation as they seek our country’s highest office.” In response to the signing of this bill into law by Governor Brown, Eric Bauman, the chairman of the state Democratic Party, referred to California as “the beating heart of the national resistance to Trump.” California legislators also approved a bill forcing future presidential candidates to release their tax returns prior to having their name be put on the voting ballot; however, that bill was strategically vetoed by Governor Brown. The timing of these two bills passed by state legislators would suggest they are out of response to the outcome of our most recent election in which President Trump has yet to release his tax returns.

With regard to California’s attempt to force President Trump to release his tax returns in the 2020 presidential election, one must first ask if it would really matter whether Trump is on the election ballot or not in the state of California. California, in all likelihood, will vote for the Democratic nominee and therefore give all of its electoral votes to him/her. In the 2016 election, Hillary Clinton won all 55 electoral votes with 61.7% of the popular vote in California while Donald Trump only received 31.6% of the vote. California’s voting trend favoring Democratic candidates has continued for seven straight presidential elections thus far. Would it really matter if Trump was on the California ballot?

Regardless of its practical applications, the legal aspect of this new bill is bound to be challenged by the California Republican Party on the grounds of it violating the eligibility requirement set forth by the Constitution. The main argument against this new bill is that California is attempting to alter the qualifications necessary for a federal election, which is an overreach of state power, since state laws cannot override the Constitution as per the Supremacy Clause. With a conservative Supreme Court, analyzing this law from a strict constructionist point of view, it is likely that the court will rule against the law. Citing that the Constitution has expressed the qualifications to run for the office of the President and since the Constitution is preempted as the supreme law of the land under the Supremacy Clause, a state altering the qualifications to run for the presidential office would be deemed as an overreach of state power and thus, unconstitutional. Luckily, this effort has been temporarily thwarted as Governor Brown vetoed the bill passed by the state legislature.

The less constitutionally controversial bill signed into law by Governor Brown is the legislation that has moved California’s primary to Super Tuesday. California is hoping on using its title as the most populous state in the US to influence the candidates selected to run for the 2020 and future presidential elections. This would mostly affect the Democratic Party’s nomination process, since California’s high delegate count would significantly influence primaries held later in the presidential election year; however, the Republican Party could also be affected should California decide to allocate delegates proportionally rather than their current winner take all system for the Republican Primary. It is also possible that the Democratic party punishes California for moving their primary up to Super Tuesday by taking away delegates from California. The state had received extra delegates for the 2016 election as a result of California’s decision to hold a late primary — moving the primary to an earlier date would negate the logic behind the additional delegates.

Further pursuing the logic that holding an earlier primary increases the influence of that state’s decision in the nomination of a party’s candidate, it would follow that Iowa, being the first state to hold a caucus, would be a very influential state in the presidential election; however, the first caucuses and primaries do not always accurately predict the outcome of the nomination process. In 2008, the Iowa caucus for the Democratic party indicated Barack Obama as the most favored candidate, and indeed it was Barack Obama who ensued to receive the Democratic nomination and win the Presidential election. However, that same year, the Iowa caucus indicated that Mike Huckabee was the more favored Republican candidate. In 2012, the Iowa caucus results indicated that Rick Santorum slightly edged out Mitt Romney; however, Mitt Romney ended receiving the Republican nomination with widespread support from the party platform. In the 2016 election, Hillary Clinton only slightly edged out Bernie Sanders in the Iowa caucus while on the Republican side, Ted Cruz was the projected winner. Though Iowa, along with other primaries held early in the election year, can have a significant influence on the party’s nominee, it is not always guaranteed that the projected results for the nominee will be accurate.

California is not only interested in releasing their primary results earlier, the state is also interested in playing a larger role in the election as a whole, as suggested by Padilla. This role also envisions California as a primary influencer in debate topics and issues which candidates should address. Coupled with the fact that California is home to 11 media markets, 3 of which are ranked in the top 30 in the world, California will attempt to utilize its media attention, in conjunction with representing California’s concerns through an early primary, to influence presidential debate issues and candidate topics. The news anchors of the presidential debate have discretion over the debate topics which California hopes to influence by presenting the topics Californians want to have addressed through its earlier primary. News outlets cover the issues and topics which the majority of their readers and viewers find important. In doing so, California would assert topics which it finds pertinent to selecting a nominee for the presidential race; thus, influencing the outcome of the election.

It is difficult to predict the true effects of California moving its primaries to Super Tuesday as opposed to a date selected in June; only time will tell when the 2020 presidential election arrives. However, Democratic lawmakers in California seem confident that their decision to change the date of their primary will prove influential in future elections and considering California’s high delegate count and large media markets, it may be possible that future election nominees greater represent the opinions of California.