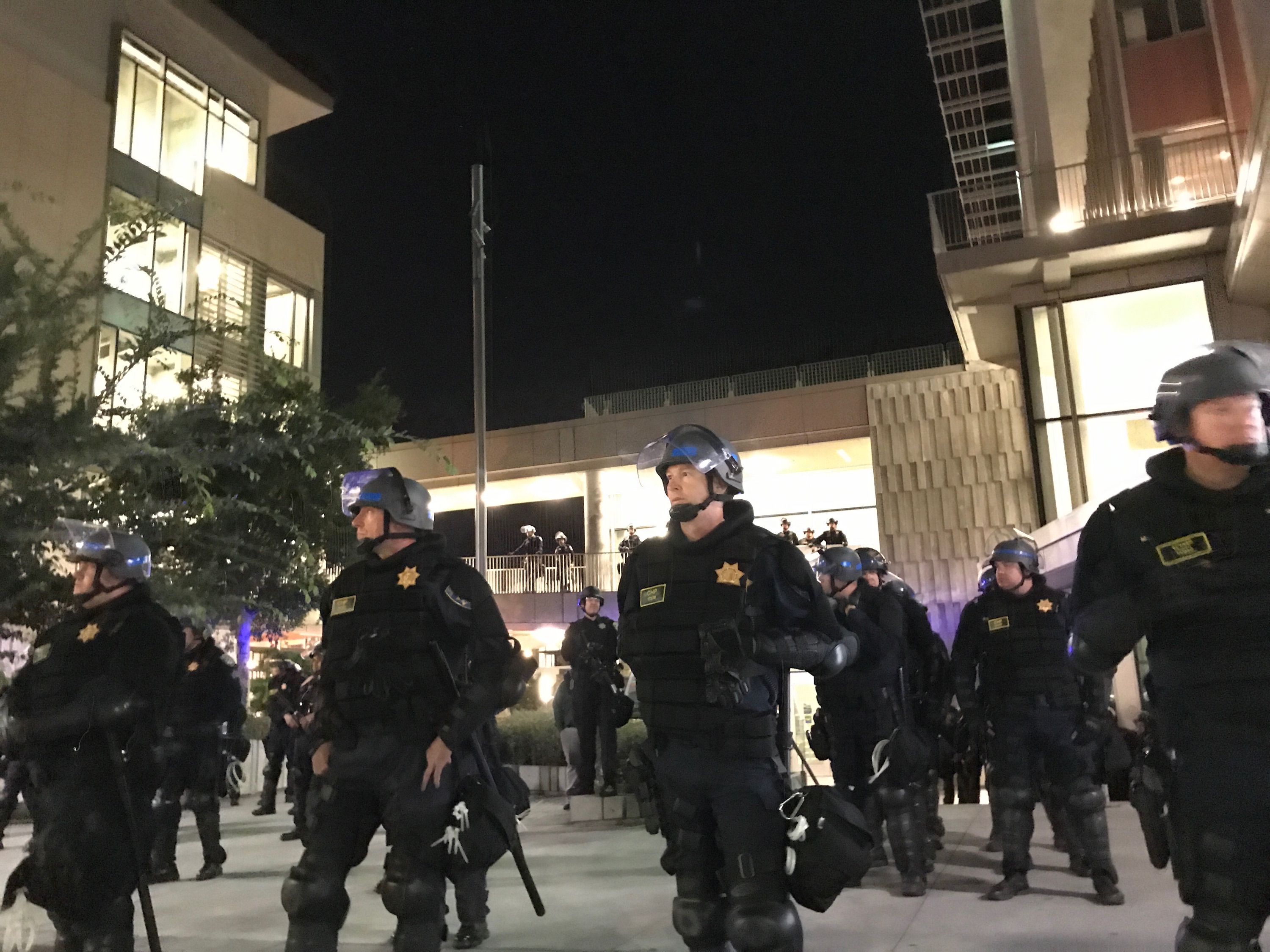 “I think especially in light of the advent of Antifa, if you look at what’s going on there, you know, you have some pretty bad dudes on the other side also”. In other words, Anti-Fascist protesters are “some pretty bad dudes” while amongst neo-Nazis chanting “blood and soil” there are “some very fine people,” according to President Trump, that is.

The actions of U.S. law enforcement agencies largely agree with the President. Abroad, radical extremists such as ISIS and Al-Qaeda have been labeled as “terrorist groups,” while domestically, a broad spectrum of organizations have received the “terrorist” designation, including Antifa and white supremacist organizations. Yet groups with an entirely non-violent ideology, platform, and organizing strategy such as Black Lives Matter and “water protectors” protesting the Dakota Access Pipeline and other fossil fuel infrastructure have also been deemed terrorist groups by law enforcement. Categorizing members of non-violent organizations or even Antifa as terrorists is inappropriate not only because the organizations don’t meet the definition of a terrorist groups but also because focusing law enforcement resources on these groups diverts attention from the serious domestic terrorist threat to the U.S.: white supremacist terrorism.

Federal, state, and local law enforcement agencies have a long and dark history of targeting civil rights groups by deeming them to be terrorist organizations. The FBI infamously considered the Black Panther Party a terrorist group, surveilling the group through the Counterintelligence Program (or COINTELPRO), which led to assassinations of Black Panthers including Fred Hampton. Similarly, other radical racial justice activists have been labeled as terrorists and subsequently assassinated, such as members of MOVE in Philadelphia, who were the victims of a bombing at the hands of the Philadelphia police department in 1985 that killed 11 people and destroyed dozens of homes. More recently, President George H.W. Bush labeled ACT UP — the AIDS Coalition To Unleash Power — a terrorist group after queer activists suggested that Bush’s actions constituted “blatant homophobia.” Later, President George W. Bush accelerated the domestic war on terror to unprecedented heights, empowering law enforcement to charge people with terrorism using a lower standard of proof and suspend due process under the PATRIOT Act.

Groups such as Black Lives Matter and anti-Dakota Access Pipeline protesters, and even Antifa, do not meet the definition of domestic terrorist groups. The U.S. Criminal Code defines domestic terrorism as “activities that-involve acts dangerous to human life that are a violation of the criminal laws of the United States or of any State” and “appear to be intended-to intimidate or coerce a civilian population; to influence the policy of a government by intimidation or coercion; or to affect the conduct of a government by mass destruction, assassination, or kidnapping.” It is clear that neither Black Lives Matter nor water protectors meet this definition: non-violent protest is not dangerous to human life and is not a violation of the criminal laws of the United States. Some might argue that Antifa is a terrorist group because (a) its members fight with far-right protesters–which is dangerous to human life and a violation of the law, and (b) these actions appear to be intended to intimidate civilians that hold what Antifa considers to be fascist views as well as affect the conduct of the government by mass destruction of property. This argument is fallacious because “Antifa” is not a cohesive organization in any sense but merely a name that acts an umbrella for numerous disparate and distinct groups that oppose fascist, white supremacist movements such as communists and anarchists. Thus, it is impossible to gauge whether the aims of Antifa on the whole is to intimidate, coerce, or affect government conduct given that Antifa lacks a leadership structure and anyone wearing a mask and a black outfit at a protest organized by white supremacists could be perceived as a member of Antifa.

Additionally, allocating law enforcement resources to addressing non-violent groups or Antifa diverts from the major terrorist threat in the U.S. — that of white supremacist terrorism. A significant portion of time is spent by local, state, and federal law enforcement investigating groups that have not caused any deaths, namely Black Lives Matter, anti-Dakota Access Pipeline water protectors, and Antifa. Federal law enforcement agencies have monitored Black Lives Matter activists on social media for years, culminating in 2016 when the FBI visited prominent members of Black Lives Matter at their residences throughout the country, warning them to not attend the Republican National Convention. Moreover, the FBI’s counterterrorism division identifies so-called “black identity extremists” as orchestrating a “movement” that is “very likely [to] lead to violent targeting of law enforcement” per an August 2017 leaked internal document. The FBI’s classification of certain African-American-led racial justice organizations as complicit in (if not leading) an “extremist movement” appears to be a pretext to surveil black activists, especially considering that “black identity extremists” do not exist as defined by the FBI. Law enforcement in North Dakota spent the better part of a year surveilling anti-Dakota Access Pipeline protestors, working in tandem with the shadowy private security firm TigerSwan, and injuring approximately 300 water protectors. The FBI and Department of Homeland Security are actively monitoring members of Antifa due to suspected “terrorist activity,” in part due to the theory that American anarchists will conduct bombings as European anarchists have done. Yet groups that have already conducted deadly attacks are gaining in strength, unabated. This year alone there have been numerous incidents of white supremacist terrorist attacks: stabbing murders in Portland, OR and in New York, NY, a car attack in Charlottesville, VA that killed one person and injured dozens, as well as an average of nine mosques being attacked every month of this year are just a few of the many white supremacist terrorist attacks. Hundreds of such attacks have occurred since the early 1990s, and white supremacist and far-right terrorist attacks were on the rise well before President Trump’s election. Since 9/11, far-right extremists have carried out many more terrorist attacks than violent Islamists, although at some points total deaths from non-white supremacist attacks have been greater. In September, the FBI disclosed that it has about as many open investigations into domestic terrorism as it does cases related to ISIS; however, this number of domestic terrorism investigations is inadequate given that white supremacist violence kills many more Americans than ISIS, and the disparity is growing larger.

Advocates of an expansive definition of terrorism suggest that groups that limit economic productivity should be labeled as terrorist organizations. For instance, Energy Transfer Partners, the company responsible for building the Dakota Access Pipeline, alleges in a recent lawsuit that indigenous activists and Greenpeace incited a campaign of “eco-terrorism” in violation of the PATRIOT Act by obstructing the development of the pipeline. Others have claimed that destruction of property, which for certain protests has totalled in the millions, unequivocally makes Black Lives Matter and Antifa terrorist groups. These opinions are not rooted in the law, which does not specify that economic disruption amplifies a crime to the level of terrorism, nor should they be in that economic disruption does not amount to physical violence or acts that are dangerous to human life — the core of the legal definition of terrorism.

Many who do not consider the label of “terrorist group” to be flawless still contend that allocating substantial police resources to address protests by Black Lives Matter, water protectors, and Antifa is appropriate due to previous provocations against the police. Critics of Black Lives Matter and water protectors point to instances in which people using the names of those groups harmed police officers: a man who killed five police officers in Dallas in 2016 claimed to be upset “about Black Lives Matter” and “recent police shootings,” while officers in North Dakota asserted that they sustained injuries resulting from a “very aggressive” crowd. Antifa has injured officers more frequently, with reports of black clad protesters throwing objects including bricks at police officers. With respect to expressly non-violent groups such as Black Lives Matter and water protectors, overwhelming police presence is not justified because (a) rogue members of these groups taking violent actions does not provide evidence that violence will occur again and (b) enormous police presence will only anger peaceful protesters due to intimidation and potential excessive use of force, making it more likely that they will use violence in the future. Perhaps the most persuasive argument in favor of overwhelming police presence at large protests is the potential for the destruction of property, yet a highly-militarized police presence may incite a crowd to destroy property even more. With respect to Antifa, some police presence is likely necessary at events where anti-fascist protesters appear (due to their expressed willingness to do violence), but the police force should not be militarized so as to increase the likelihood of excessive force.

American cities are not war zones. Elected officials and law enforcement agencies should not scapegoat peaceful organizations such as Black Lives Matter or anti-Dakota Access Pipeline protesters or even more violent groups like Antifa by labeling them as terrorists in order to justify a disproportionate police response. Local, state, and the federal government should instead allocate resources on the omnipresent domestic terrorist threat in the U.S.: white supremacy.