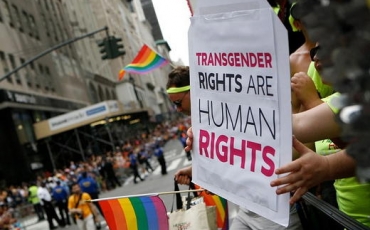 President Trump’s decision to ban transgender individuals from serving in the military shocked people from both sides of the aisle. The unanticipated decision was widely unpopular even within Republican leadership. A poll done by Quinnipiac University found 68% of Americans think transgender people should be allowed to serve in the military, with 91% of self-identifying Democrats agreeing and 32% of self-identifying Republican agreeing. Despite a majority of Republican voters supporting the ban (60%) according to this poll, noteworthy Republican politicians have spoken out against Trump’s decision. Most notably, Republican senator John McCain introduced a bipartisan bill in September that would protect transgender individuals from being discharged solely based on gender identity. Trump’s policy proposal received mixed reviews at best, but people almost uniformly disagreed with the way it was presented. Using a tweet to announce a major policy change is unprofessional and disrespectful. It left transgender service people in the dark as to whether they would be discharged and overall created a state of uncertainty and unease. Even advocates of the ban believed the policy should have been fronted by Secretary of Defense James Mattis, perhaps a more appropriate speaker regarding military policy.

Iraq War veteran J.R. Salzman states “war is no place for people who are mentally, emotionally, or physical confused or in turmoil”. Salzman goes on to recall the horrendous conditions of his deployment to Iraq, noting some people simply do not have what it takes to be a warrior. A Williams institute study found transgender people have a disproportionately high suicide rate, with lifetime suicide attempt reaching upwards of 40%.

Supporters of the ban point to the higher suicide rate within the transgender population as evidence against allowing them to serve in our military. Transgender individuals are more susceptible to suicide, and this risk might increase while in the service, considering military members also have a disproportionately high suicide rate compared to civilians. The Defense Suicide Prevention Office, a subset of the Department of Defense, reported there were 275 suicides within active duty members, 203 suicides within members on reserve, and 123 suicides within the National Guard, all in 2016 alone. Several people like Salzman look at both of these statistics with concern. The high suicide rate among transgender people has yet to be definitely attributed to societal or biological factors. Regardless of the cause, should transgender individuals be allowed to serve in physically and mentally demanding pressures given their high propensity of suicide? Conservatives in favor of the ban answer no.

Additionally, accommodating for transgender service members in the military will incur additional costs that might not be in our best interest. A study by the Rand Corporation titled “Assessing the Implications of Allowing Transgender Personnel to Serve Openly” estimates health care for transgender individuals could cost as much as $8.4 million annually. This estimate is inclusive of care during transitioning, hormonal treatment, psychological treatment, etc. However, political contestants point out $8.4 million is a tiny fraction of the total defense budget, which is actually $50 billion, making the costs of care for transgender individuals only 0.017% of total defense spending. Although there still is additional cost involved, maybe the ban is not justified by such a tiny fraction of military spending.

Proponents of the ban also point to the confusion that arises regarding physical expectations for transgender service people. The fitness expectations for male and female service members in the military differ drastically, accounting for the difference of strength between the two sexes. Is a transgender man held to the same physical standards as cisgendered males? What if the individual identifies as transgender but has yet to transition or go through hormonal therapy? Does a transgender female have an unfair physical advantage compared to cisgender females because of biological differences? For some, these complications with standardizations of expectations are indicative of unnecessary questions that could be avoided with the ban. Just because there are more questions than answers, however, is not necessarily a reason to ban transgender people from the military. Conservative political commentator Ben Shapiro points out “No one has the ‘right’ to join the military,” making the point that serving in the armed forces can be decided according to ability. The military actively decides people to be ineligible to serve due to medical, physical, mental, and many other reasons. Well, serving in the armed forces may not be a right, but discriminating solely on the criterion of gender identity is almost certainly illegal. The ACLU filed a lawsuit on Aug. 28, challenging the transgender military ban with substantial legal grounds dominated mostly by the constitutional equal protection clause. The ACLU has historically represented people to protect their civil liberties, and this case may be the next in line for a historical reputation. The lawsuit, by nature of the courts, will likely take several months before an actual decision is reached but many are hopeful the court will rule in favor of the ACLU.

Certainly not all transgender individuals are eligible to join the military, but the same could be said of any demographic. However, a blanket ban like the one proposed by President Trump would prevent perfectly eligible candidates from joining the military. It may be argued a disproportionate number of transgender people are unfit to join the military because they have a higher propensity to commit suicide compared to cisgendered people, meaning a higher percentage of them might be deemed ineligible to serve. But, higher numbers of ineligible people in a population does not warrant a ban. Kristin Beck, a Navy Seal veteran came out in opposition to Trump’s ban in a Business Insider interview,  just one of many transgender veterans speaking out against Trump. When asked about potential problems with unit cohesion involving transgender soldiers, Beck responded “A very professional unit with great leadership wouldn’t have a problem.” Beck and other opponents of the ban argue transgender soldiers will not pose a problem to unit cohesion with the proper discipline and leadership. Potential candidates for the military historically have been evaluated on a case-by-case basis, but Trump’s ban would ensure transgender individuals be deemed ineligible, even if they are fit to serve like established veteran Beck. Kristin Beck showcases the diversity of the United States military, indiscriminate of color, creed, or gender. Beck exemplifies transgender individuals’ potential serving their country and reaching a military elite force. Given there are fully functional transgender individuals who have served and continue to serve in our military, maybe gender identity alone should not render someone ineligible to serve their country.