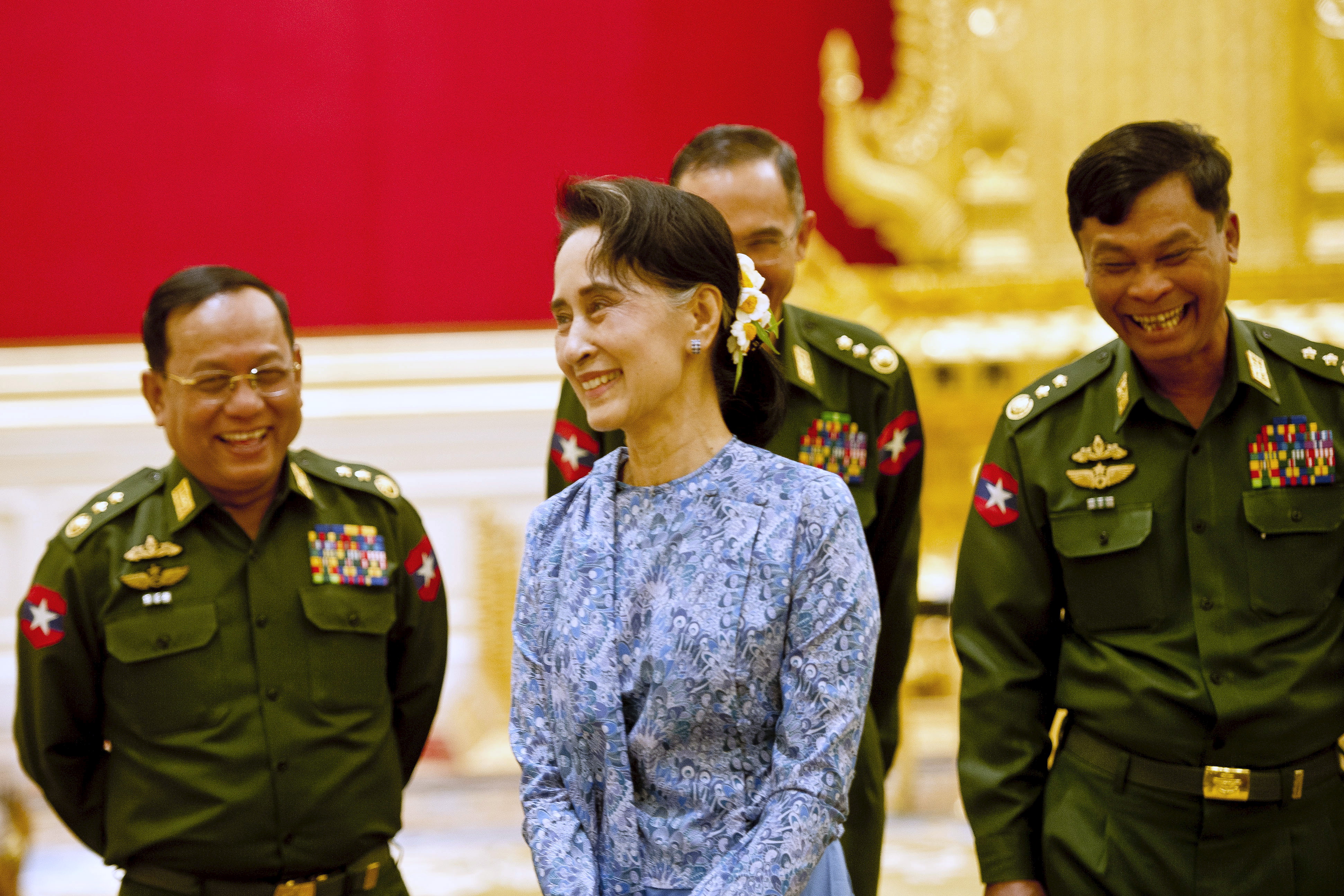 Aung San Suu Kyi and The Politics of Power in Burma

Power, what is it good for? Absolutely nothing!

Aung San Suu Kyi was once the world’s most famous political prisoner. From her first period of house arrest which was due to her establishing the pro-democracy National League for Democracy to her last day of house arrest in November 2010, Aung San Suu Kyi was under house arrest for a total of 15 years. Over that time, Aung San Suu Kyi, through her limited interactions with the outside world became symbolic of a brand of peaceful political activism that was not only morally commendable but effective in putting pressure on the Burmese military to democratize and allow for civilian rule. Today, Aung San Suu Kyi is the leader of the ruling National League for Democracy, and although she herself cannot be president due to the British nationality of her two sons it has been made clear that she is de-facto leader of Burma. As she has taken a more prominent political role, the world has found Aung San Suu Kyi lacking in her response to what the United Nations has called the systematic cleansing of the Muslim Rohingya minority by the powerful Burmese military. Aung  San Suu Kyi’s reticence to wield her considerable influence to stop the situation has puzzled many observers who have come to expect more from her. With the world struggling to find an answer to Aung San Suu Kyi’s muted response to a systemic ethnic cleansing, a damning but perhaps overlooked conclusion is this: Aung San Suu Kyi has become a politician. As the Council of Foreign Affairs noted, there is a “country-wide anti-Muslim sentiment” as they are not recognized as part of Burma’s history by a large number of Burma’s population. This anti-Muslim sentiment has been used by the Burmese military to put Aung San Suu Kyi in an awkward position. The decision that faces Aung San Suu Kyi is this: condemn the military and stand to be seen as not “Buddhist” enough to lead Burma or stay silent with a half-hearted attempt to condemn in order to maintain support from a society that is overwhelmingly distrustful of the Rohingya. A fundamental fact is that when in power, every decision has an opportunity cost. It is then not only regretful but morally vacuous that Aung San Suu Kyi has succumbed to viewing ethnic cleansing through that prism.

Burma’s treatment of the Rohingya, a Muslim minority group who live in Myanmar’s far western Rakhine State, has historically been troublesome. The Rohingya have always been an easy target in a country where a significant portion of the population identify themselves as Buddhist thus exposing themselves to violence from a growing and fervent right-wing Buddhist movement that is inclined to violence. On a more systematic level, the past 30 years have seen the Rohingya on the receiving end of some of the most inhumane policymaking as they are not recognized as Burmese citizens which effectively makes them as a group stateless. Without any citizenship, the Rohingya has historically been confined by the Burmese government to designated slum areas that lack proper sanitation or access to the most basic necessities. Given the history of systemic oppression, it is perhaps not surprising to see the response of the Burmese military on a series of attacks on government checkpoints by Rohingya militants in late August. The attacks, by a small group of Rohingya militants fighting for independence, has been used by the Burmese military to justify launching into what the United Nations has called “a textbook systemic cleansing campaign” that has displaced over 400,000 Rohingya’s. Most Rohingya refugees cross the border into Bangladesh where they are greeted with over packed and underprepared refugee camps.

The world certainly has not been kind in its reaction to Aung San Suu Kyi’s paralysis in dealing with the ethnic cleansing in her country. Kenneth Roth, the head of the Human Rights Watch, has said, “Now that she’s in power, she symbolizes cowardly complicity in the deadly tyranny being visited on the Rohingya.”  Figures such as Archbishop Desmond Tutu, Malala Yousafzai, and the Dalai Lama have urged Aung San Suu Kyi to condemn the actions of the military. On her part, Aung San Suu Kyi has responded to criticism in a manner that would make any seasoned politician proud as she has said something without actually meaning anything. In her first major speech since the cleansing began, Aung San Suu Kyi steadfastly refused to criticize the military instead choosing to say that “The security forces have been instructed to adhere strictly to the code of conduct in carrying out security operations, to exercise all due restraint and to take full measures to avoid collateral damage and the harming of innocent civilians” before ending the speech by condemning all human rights violations.  Perhaps unsurprisingly, Aung San Suu Kyi’s response has been inadequate in pressuring the Burmese military into stopping their ethnic cleansing campaign.

Thus the heart of the matter with Burma today is Aung San Suu Kyi’s relationship with the military. Historically the Burmese military has had an outsized role in running the country as a military junta ruled the country with an iron fist. In 2008, under heavy international pressure from the international community, the Burmese military ceded power and paved way to multiparty elections. Post democratization, the military has not willingly given away power to the population. They have instead chosen to adopt the way in which it influences events in Burma. Under the terms of democratization, the military still retains control of key government institutions such as the Burmese equivalent of the Department Of Defense along with 25% of the seats in parliament, meaning that any major legislation can be vetoed by the military.

Through this lens of power, we can better understand the military’s intentions. With regard to Aung San Suu Kyi, the military has leveraged the high levels of distrust and animosity towards the Rohingya to corner Aung San Suu Kyi into choosing between her international standing and her local standing with what is now her constituents. The fact that Aung San Suu Kyi’s response has been rather lackluster indicate that she has chosen to fold in a bid to preserve her standing with her constituents. The election of Aung San Suu Kyi was meant to be a time of positive transition for Burma as it tries to transform itself into a democracy where rights are protected and people are free. As students of Politics, we have been taught that no transition is ever perfect and Burma’s transition before the cleansing certainly was not perfect. However, observers had always thought that during pressing times, there would be Aung San Suu Kyi there with her moral and political mantle to lead the way to a more democratic Burma. What we have however is that Aung San Suu Kyi does not seem to be very interested in becoming a moral leader as she has instead succumbed to the pressures of short-term politics.

With regard to the Rohingya, the military’s actions are very much motivated by the same felicity to power. The attack on the Rohingya serves to project an image of a Buddhist Burma that is in line with the values of the military. However, by attacking the Rohingya on the basis of self-defense, many astute observers have said that the military has also started to create a precedent for taking over from civilian rule in the name of “national security.”  Thus,  the most important conclusion from analyzing the role of the military is a policy prescription that has not been widely talked about with regard to Burma. To incentivize the Burmese military to stop its actions, serious economic and political sanctions must be levied. Pressuring Aung San Suu Kyi to speak out is exactly what the Burmese military want from the international community as it deflects attention from the Military and onto Aung San Suu Kyi who has decided to play politics with the lives of the innocent Rohingya. What Burma’s military leaders cannot afford is for Burma to come under heavy economic sanctions as it would ultimately turn the country against the military.

For many observers, the election of Aung San Suu Kyi’s National League for Democracy as Burma’s ruling party signaled the first genuine hope for civilian rule in a country notorious for the heavy hand of the military. Under the shadow of ethnic cleansing, that  promise cannot be fulfilled. Looking forward, the international community must not only use its words but also its power to impose sanctions to truly disincentivize the Burmese military. As for Aung San Suu Kyi, we have seen her give up her mantle of moral leader to step down to interact in the world of politics.  Aung San Suu Kyi once opined that even under the most crushing state machinery, courage rises up again and again as fear is not the natural state of man. That is advice she should heed carefully, as when fear is eventually defeated, Aung San Suu Kyi will forever be remembered for putting politics first and humanity second.