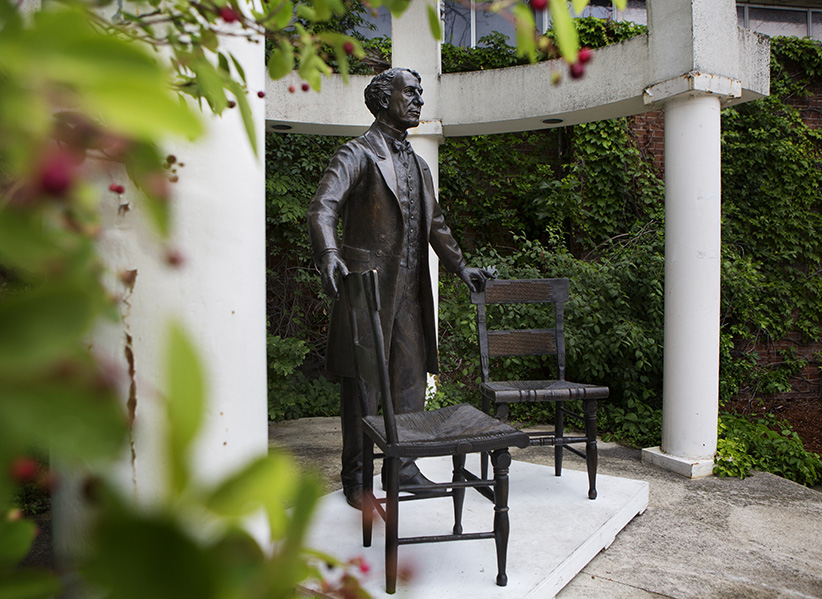 In the town of Kitchener, Ontario, the statue of Sir John A. MacDonald is struggling to find a permanent home. The bronze likeness of the nation’s first Prime Minister, created by famous Canadian sculptor Ruth Abernethy, was initially commissioned to be featured alongside other statues of past statesmen in a new city park celebrating Canada’s 150th birthday. However, the plans were scrapped following a public outcry against its presence. After serving a brief, bereft stint at a local hockey rink where it became a popular perch for pigeons, the statue was accepted by the neighbouring Wilfrid Laurier University, where it stood in an alcove for a scant four months before a petition signed by more than 1,000 faculty and staff sent it packing once more. The existence of the statue would be contradictory to the university values of “inclusivity and diversity”, reports a special advisory committee created to review the issue.

The sculpture’s title, “A Canadian Conversation”,  celebrates MacDonald’s successful efforts in bringing both a French-speaking, historically Catholic territory and the English Protestant colonists which conquered them to the same negotiating table. In the 21st century, however, MacDonald has become the epicenter of another sort of conversation, his presence this time around more divisive than unifying. The rejection of the statute by the city and the university reflects an increasing sensitivity and awareness among the Canadian public toward the treatment of indigenous groups through legislation enacted by many of the nation’s lauded founders. MacDonald, in addition to uniting the Canadas, was known for spearheading the creation of the residential school system which took indigenous children from their families in order to “civilise” them.  In a speech to parliament, he famously argued that “…the child lives with its parents, who are savages; he is surrounded by savages… the only way to do that would be to put them in central training industrial schools where they will acquire the habits and modes of thought of white men.”

He is not the only historical leader to receive criticism; other community efforts in recent months include a slew of renamings of buildings, streets, plazas, and parks across Canadian municipalities to celebrate more diverse figures in history. The city of Edmonton, Alberta, renamed a section of the quiet 23rd Avenue to “Maskêkosihk Trail”, a name chosen in conjunction with the chiefs of local aboriginal Cree tribes (the word “maskêkosihk” translates to “the people of the land of medicine”; the change gives tribute to the heritage of indigenous communities as the gatherers of flora in the region). Further south, the controversial Langevin Bridge in Calgary, named after another strong proponent of the residential school system, is now dubbed “Reconciliation Bridge”. In Ontario, the provincial Elementary Teachers’ Federation went a step farther last month as it passed a motion to rename all primary schools and buildings named after MacDonald.

The fact that indigenous issues are only now stepping into the edges of public consciousness is both a source of national shame as well as penitence. From 2008 to 2015, the Truth and Reconciliation Commission of Canada (TRC), a federally-sponsored commission, uncovered thousands of cases of physical, emotional, and sexual abuse suffered by indigenous children in the residential schools, the last one of which closed as late as 1996. Many former students are, to this day, buried in unmarked graves after dying from mistreatment and neglect, and those who were allowed to return home suffered additional alienation from their culture. These experiences, compounded with sets of outdated laws which limit the movement and opportunities of many status-bearing aboriginals, has given rise to systemic problems within the communities. Rates of poverty, suicide, crime, drug abuse and alcoholism have been consistently higher amongst indigenous individuals than any other group within the country.

By contributing to the conversation via re-namings and rejections of colonialist symbols, many local governments hope to shed light on these horrors and to discuss Canadian history in its complete form at the same time that they look to welcome indigenous individuals back into their schools and communities.

At the same time that incremental steps are being made, many opponents have lambasted the new developments as promoting the erasure of history. John Baird, a member of Parliament for the Conservative Party, dubbed the decision “political correctness on steroids” and described it as “the most ridiculous thing I’ve ever heard”. Less extreme critics reason that keeping the names in place while changing the dialogue around them might serve as a better lesson for the youth of the future than wiping these figures, many of which made important contributions in other areas (Langevin, for instance, reformulated Quebecois-Canadian relations) from the slate. The creators of the MacDonald statue have pointed out the sculpture should be shown with an educational component.

“No one is saying they were saints, we want people to talk about them, their accomplishments and deficiencies, and the context of their time.” comments Jim Rodger, a project director.

Other opponents of the renaming efforts also argue that to posthumously punish policymakers is absolving the public of collective responsibility. These men, they assert, were merely elected officials representing the general sentiments of their constituents, and the erasure of their name represents nothing but pinpointing the blame on one individual rather than acknowledging the larger societal prejudices behind the implementation and success of the policies.

However, many activists point out that regardless of intentions, the effect of putting up a statue or allowing a school to bear the name of a past oppressor does not allow for a conducive dialogue. Sir John A, regardless any accompanying plaques that detail his crimes, will still stand proudly enshrined in bronze, overlooking the park trails where children, including indigenous children, play. His name will still be emblazoned on school entrances and stationeries and report cards. The very purpose of a statue or a building’s name is to celebrate, and in its exuberance, it brushes past any nuances that might varnish its shining, authoritative legacy.

“It’s not erasing, it’s putting it in its proper place,” Tori Cress, an aboriginal activist with the Ontario nonprofit Idle No More, expresses. “I don’t see how we should be glorifying folks like this in such a public place as schools.”

Even as signs around the country are being dismantled and relabeled, progress remains reluctant and inconsistent. In the town of Port Alberni, BC, officials had decided to keep in place the names of two streets commemorating a supporter of Japanese internment. In Ontario, the provincial government struck down the teachers’ resolution for elementary school renamings. As for the statue of Sir John A. Macdonald, it has finally found a place to stand in the town of Baden, Ontario, where it occupies the grounds of a preserved 19th century castle and will soon be joined by three other statues of Canadian politicians. The debate continues.