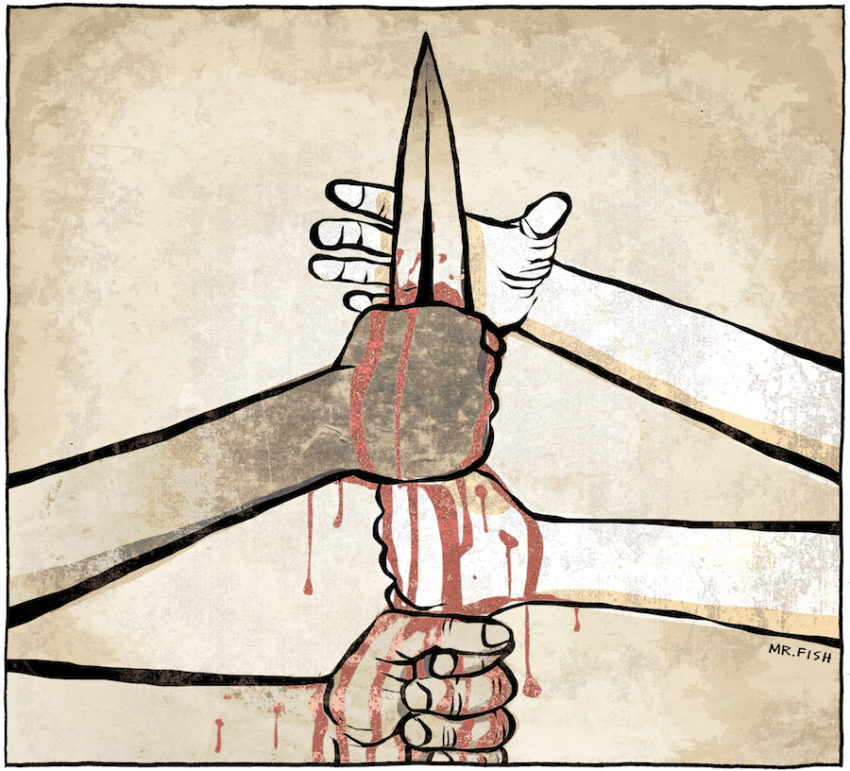 A House Divided: What Must Be Done to Achieve Campus Détente

Note: The views in this article are those of the author alone, and do not represent the views of any organization in any official capacity.

A favorite talking point of the Right is that students at liberal universities, Berkeley especially, live in a bubble. Whenever the students of UC Berkeley embarrass themselves in front of the nation with yet another act of political violence, conservatives feel secure in their superiority to the “special snowflakes” of the Left Coast. They delight in their firm belief that once the angry children of Berkeley leave their liberal utopia, they’ll join the middle class and become good Republicans (or at least some sort of tolerable Democrats).

To the indignation of Republicans everywhere, though, it must be said that they, too, live in a bubble. I discovered this firsthand when I began interning at the conservative Heritage Foundation this semester. To my new peers at Heritage, I am an alien – and not the illegal kind. Hailing from citadels of the academic Right such as Hillsdale College and Liberty University, many of my coworkers are flabbergasted by the idea that I have to hide my views on campus. At their schools, being conservative is the norm; it’s the Democrats who are laughed at, socially shunned, or discriminated against by the school administration.

Throughout my time in college, I’ve always tempered my political views to the extent that I am almost apologetic of them, but my time at the Heritage Foundation has taught me that there is a world outside of Berkeley where I don’t have to be ashamed of my beliefs. None of my ideas are radical: to borrow the mission statement of Heritage, I believe in principles of free enterprise, limited government, individual freedom, traditional American values, and a strong national defense. I like to believe that my views are both principled and consistent, and it has been an honor and a privilege to work at the Heritage Foundation, the bastion of honest conservatism for over forty years. It is thus saddening that even the most decent and honorable envoys of the Right can be slandered as bigots and fascists by a disingenuous, moralizing, and intolerant Left.

Yesterday, the Berkeley Political Review published an opinion piece by my colleague Curtis Wang entitled “A Dance with the Devl(in): Insight to the Fracturing of the Berkeley College Republicans and How It’s Still Dangerous.” The article was ostensibly an interview with Bradley Devlin, the secretary of the Berkeley College Republicans and the leading figure behind the reported ouster of former president Troy Worden. To be sure, the impeachment of Mr. Worden is a bombshell amongst the campus conservative community. His removal from office represents a repudiation of his inflammatory tactics, if not by a majority of campus conservatives, then at least a strong faction of them. It’s an event that deserves to be covered from as many angles as possible, and Mr. Wang’s interview with Mr. Devlin could have been an interesting exposé into the shifting inner workings of the Berkeley College Republicans, a journalistic angle that not even the Daily Cal thought of capturing.

Unfortunately, this was not what Mr. Wang decided to do.

His article was instead rife with hyperbole, mischaracterization and false equivalencies. Rather than honestly listening to and recording the opinions of Mr. Devlin, he instead chose to selectively transcribe those with which he disagreed, then offered hastily-made counterpoints that only serve to confirm pre-existing biases. According to Mr. Wang, Devlin said that, controlling for factors like age and experience within a given career field, the gender pay gap drops from the oft-cited “77 cents on the dollar” to between 94 and 98 cents per dollar earned. He claimed this assertion was found “nowhere in any credible research,” despite the fact that a cursory Google search reveals a study purporting this very fact from the National Center for Policy Analysis – a right-leaning think tank, to be sure, but certainly a credible one. Just because Mr. Wang does not like the ideological leanings of a given institution does not mean that he can dismiss it out-of-hand. I could otherwise do the very same when he cites statistics from the Center for Immigration Studies, a group denounced by institutions varying from the Cato Institute to the Center for American Progress, and designated a hate group by the Southern Poverty Law Center. Regardless, even the venerated Brookings Institution wrote that the “source of the current gap is the fact that women still take more time off from work to care for their families,” and that “these family responsibilities may also affect the kinds of work they choose.” These institutions certainly all produce “credible research,” yet Mr. Wang blithely rejects them in his partisan attacks on Mr. Devlin.

Mr. Wang also conflates different statistics throughout his piece on Mr. Devlin, selectively comparing them to prove his overall point. In his paragraph on Mr. Devlin’s views on illegal immigration, he writes that “On immigration, despite the fact that economists almost universally agree that immigration is a huge benefit for the American economy, Devlin believes that because undocumented immigrants are large recipients of welfare programs with 62% of undocumented immigrants taking welfare, they levy an undue burden on the American taxpayer.” Mr. Wang includes studies about overall legal immigration, then brings them to bear in an attempt to discredit Mr. Devlin’s views on illegal immigration, though the two are most assuredly distinct.

Throughout the first half of the piece, Mr. Wang engages a in unilaterally-declared debate with Mr. Devlin, where only one party even knew they were debating. The most problematic feature of his article, though, is the second half. In this section, Mr. Wang speculates on the future of BCR in light of the reported impeachment of Troy Worden. He writes that “Devlin’s political views… are no less toxic” than those of the BCR old guard. “While Devlin and his followers are not as outspoken and volatile as the prior BCR administration,” he continues, “the demonstrative value of his political beliefs are either factually incorrect or they are just as socially isolated from the reality of marginalized communities.” He continues that “Devlin wants to make the BCR a home for conservative political activism and hone its image back to a more traditional conservative stance, [but] it is no less dangerous to the public safety and to the ideological efficacy of Berkeley.” His last sentence is perhaps the most galling: “Just because a fascist puts on a fancy suit, it doesn’t make him any less of a fascist.”

Mr. Wang’s article evinces what seems to be his sincere refusal to even engage with ideas on the Right. Rather than conduct a straightforward interview with a notable campus group leader, he chose instead to use Mr. Devlin to pen a screed against conservatism in all its forms. To be fair, he is far from alone in his aversion to dissenting ideas. In their recent coverage of the foundation of a new anti-alt-right campus group called the Berkeley Conservative Society, Daily Cal editors could not refrain from calling mainstream Republican commentator Ben Shapiro “far-right,” an ideological superlative from which they refrained when leftist counterparts to Shapiro like Bernie Sanders visited campus.

The unwillingness by progressives on campus to earnestly interact with their conservative counterparts has consequences that reach beyond the pages of a student magazine. It’s no secret that UC Berkeley is one of the most liberal campuses in America. It’s also well known that the Berkeley College Republicans are also one of the most notorious student groups in the nation. This is not a coincidence. The recent growth in BCR’s notoriety has coincided with the rise of a quasi-alt-right faction within its ranks – a faction that Devlin and his supporters are seeking to take down by deposing former president Troy Worden. The tactics and speakers chosen by Worden and his ilk directly correspond to the rise of hysterical leftism on the Berkeley campus. When Ben Shapiro visited Cal in 2015, he came and went without incident. When he visited earlier this year, though, the shrieking intolerance of campus progressives presaged the infamous “Free Speech Week” put on by the Wordenistas of the Berkeley Patriot, wherein Milo Yiannopoulos finally made his debut on a hyper-militarized Sproul Plaza. This event, the dreaded Milo successfully speaking at Cal, ultimately came and went with comparatively little fanfare. He came, addressed a small crowd, and departed. The next day, the cop cars left. Berkeley was not plastered across the screens of CNN and Fox News. And life returned to normal.

The lunacy on both sides has to stop, but the onus of ending that cycle now falls on campus progressives. For their part, Berkeley conservatives are doing their part to de-escalate the ideological Cold War gripping our campus. The toppling of Troy Worden and the foundation of the Berkeley Conservative Society are proof that many conservatives on campus want a return to normalcy and away from controversy. In order to preserve this change, though, the Left has to do its part as well. The rise of the alt-lite faction of BCR occurred after a very contentious election season, where Berkeley Republicans were harassed, stalked, and physically assaulted for their beliefs. This enabled a controversial and radical faction to seize control of Berkeley conservatism, bringing a year of strife to Cal. If run by more prudent officers, BCR would not have invited Milo to campus last spring, but that doesn’t mean that they had no right to do so. The increase in mudslinging after that event culminated with the so-called “Free Speech Week” last month, and since then, events seem to have subsided. Only with action on both sides can this tenuous peace last.

Try as they might, progressives at Berkeley will never be able to quash their right-wing foes. Conservative students have always attended Cal, and they always will. The choice that the liberal majority has is with which faction they want to interact. The movement conservatives are making a resurgence now that a détente that exists between campus Left and Right, but this peace is far from assured. The fact remains that for some Berkeley progressives, any conservative opinion, no matter how articulate, mainstream, or polite, is intolerable. If Berkeley progressives make authentic attempts to engage with conservatives, true dialogue can exist on campus, and controversy for controversy’s sake can be avoided. On the other hand, if progressives reinvigorate their efforts to persecute conservatism in all its forms, as Mr. Wang did with Mr. Devlin, then the alt-right factions will be emboldened once again. The choice now lies with the Left.