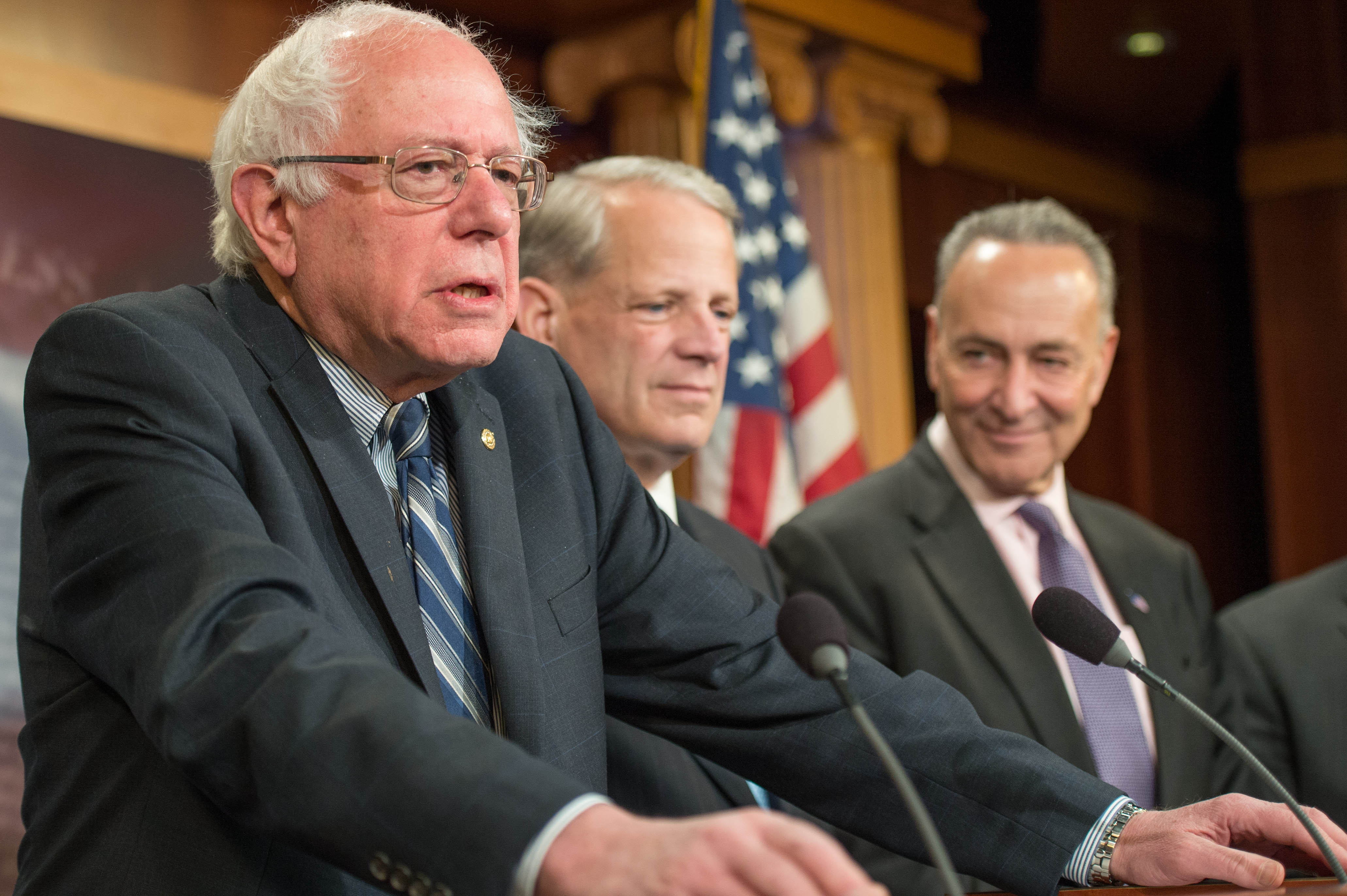 Marriages are messy. Every couple shares some common ground that forms the basis of their relationship, but, humans being humans, each will have disagreements that create tension. Sometimes, the spouses come together and talk about these differences like adults. But if they come to view the other as detrimental to their wellbeing and fail to compromise, then divorce is on the table. The marriage within the Democratic Party between its “institutional” wing and its “activist” wing is fraught with these kinds of fights, with little prospect for mature, compromising resolution.

Left leaderless, Democrats have been split roughly into two camps that disagree over tactics, priorities and ideology. The “institutional” wing, until recently led by Hillary Clinton, promotes a “big tent” model of the party by welcoming social conservatives, red state democrats, minorities, and Clintonian New Democrats. By and large, this diverse coalition rejected the Sanders’ overwhelmingly white, college-educated “revolution” in favor of more moderate positions. In line with most of the party’s history and contrasting with most activists, party leadership doesn’t always see a liberal ideology on social issues as a necessary component of what it means to be a Democrat. House Minority Leader Nancy Pelosi, for instance, blamed her party’s 2016 presidential loss on what many Democrats saw as a relatively radical pro-choice platform, despite Pelosi’s own staunchly liberal voting record on abortion. Later, in an overture to social conservatives, Democratic National Committee (DNC) Chair Tom Perez met with key Pro-Life leaders to discuss the issue.

Orienting the party away from economic and social progressivism is politically useful for the institutional wing. After all, House leaders are elected by Congress members, so their public statements typically align somewhere around the median viewpoint of their party’s congressional representatives. Moreover, because the main job of the Democratic Congressional Campaign Committee (DCCC) and the DNC is to win elections and raise money for the party, a historically successful strategy has been to cast an ideologically broad net move center to win elections. Likewise, embattled red state Democrats need to operate in a completely different political landscape than coastal liberals and therefore need to support things like abortion control, the death penalty, and gun rights in order to get in office. John Bel Edwards — the Democrats’ only governor in the Deep South — told Politico reporters that Democrats “would do much better if we fielded more candidates who were pro-Second Amendment and pro-life such as myself.” For now, these interests align fairly comfortably. However, the new activist wing could disrupt this alignment with its demands for institutions to take hard left positions.

Indivisible, by far the most active progressive grassroots organization, has been the most disruptive outside force so far. Their goal has been to push the Democrats into taking an uncompromising hard line against Trump; their webpage openly identifies the Tea Party as a source of inspiration. One founder of Indivisible, Ezra Levin, remarked that “progressives should target Democrats and make sure they have spine,” echoing the Tea Party’s lamentations of GOP leadership’s cowardice.

A leftist Democratic Party is the goal of Indivisible. The Tea Party movement became notorious for the problems they caused Obama and for their stubborn refusal to play ball with GOP congressional leadership, a refusal that ultimately allowed the movement to pull the party’s institutions hard to the right. Likewise, Democratic Party institutions adopted the most progressive platform in recent memory at the 2016 convention, and have come under pressure from congressional Democrats to move left on healthcare. Clearly, Indivisible’s talk of imitating Tea Party tactics and goals is far more than just talk. In June, Indivisible launched an electoral organ to recruit and prepare candidates to run for office, many of whom would presumably be running in primaries against candidates supported by the institutional wing of the party, given Mr. Levin’s call for vertebrate Democrats.

However, Indivisible’s electoral shift doesn’t necessitate the Democrats’ demise. Intraparty fighting is expected, even necessary, for parties to function. In order to retain support from the party base, institutions need to reflect their interests by fielding candidates that appropriately match the views of their voters. There’s no reliable way to conduct good polling on the micro level, so testing ideas and messaging directly against each other in state and local primaries remains a necessary democratic input that party institutions use to update their view of their voters and shift views accordingly. As in relationships, when fights create a mutually agreeable compromise, the party can emerge strengthened.

Yet these disputes can begin to weaken the party when factional fights fail to fade. Activists have cast aspersions on “black centrists” Kamala Harris, Cory Booker, and Deval Patrick despite these politicians’ support for progressive policies. One activist leader even railed that Harris “is the preferred candidate of extremely wealthy and out-of-touch Democratic Party donors.”Clintonian party operative James Carville voiced a common sentiment among institutionalists when he told Politico that “purists or ideological ayatollahs in the Democratic Party need to shut up and stand down,” referring to left-wing activists. This reflects a high degree of initial distrust between the two camps, setting the bar for compromise much higher than otherwise. Institutions’ compromises and leftward shift to favor insurgents have not satisfied many in the activist wing and instead sapped the institutional wings’ willingness to compromise.

Moreover, the activist wing doesn’t possess much loyalty to the institutional Democratic Party. In response to news that Senate and House Minority Leaders Chuck Schumer and Nancy Pelosi struck a highly favorable deal on DACA, instead of applauding leadership, a senior Indivisible representative told the LA Times that “[Schumer and Pelosi are] negotiating with someone that we don’t trust,” and noted that they would reserve judgment until they see details of the deal. Echoing Indivisible, dozens of activists shouted down Nancy Pelosi for her deal with Trump. This low level of loyalty suggests that activists and left-wing candidates will use their electoral power not only to challenge Republicans but also attempt to shift the party by brute force, threatening sitting Democrats with primaries.

In other words, this divide has resulted in similar dynamics to the Tea Party. The key difference is scale: Indivisible now claims over 6,000 chapters whereas the Tea Party at its height controlled about 650. Moreover, Indivisible’s coalition is far more diverse and geographically widespread, lending it a heft that can be translated easily into electoral firepower for its candidate recruitment and campaigning. This momentum can become self-sustaining, with Indivisible groups working with their chosen candidates who raise money, generate media coverage, and create grassroots support of their own to feed back into the progressive cause. Moreover, Indivisible’s relative diversity gives it a longer lifetime than the Tea Party, which died less than a decade after it was born. Even if one constituency’s grievances with the institutional wing diminish, Indivisible is likely to retain active support from another group.

Low loyalty and trust, along with an unwillingness to compromise, feed into a negative cycle in which competing groups attempt to claim credit for victories and cast blame within the party for defeat. If Democrats continue to receive ambiguous messages about the effectiveness of their strategy, these fights can result in heightened tensions rather than a unifying resolution to their internal debates. Persistent underperformance, while the party is uncertain about its identity, lends itself to a wide variety of possible interpretations, allowing both camps to confirm their pre-existing notions and entrench rather than cooperate.

A Tea Party-esque split within The Democratic Party — either the creation of an obstinate roadblock within the party or an entirely separate party — is now in the cards. Irreconcilable differences over tactics, ideology, and party identity have led each wing to view the other not merely as incapable of representing their interests, but as an actual impediment to their priorities. Indivisible’s move to perform the same functions as the party institutions creates space for the activist wing to forgo institutions altogether. Expect Indivisible to attempt to recruit candidates, raise money, and organize rallies in favor of candidates in opposition to the DNC and DCCC apparatus which have traditionally performed these functions. This tussle for which wing represents the identity of the party can be solved through dialogue and compromise which creates a new consensus, but the rapidly diminishing capacity for both is the biggest development within the party today. Most relationships have conflict, but whether or not the Democrats’ conflict erupts into a divorce depends upon the partners’ willingness and ability to compromise.