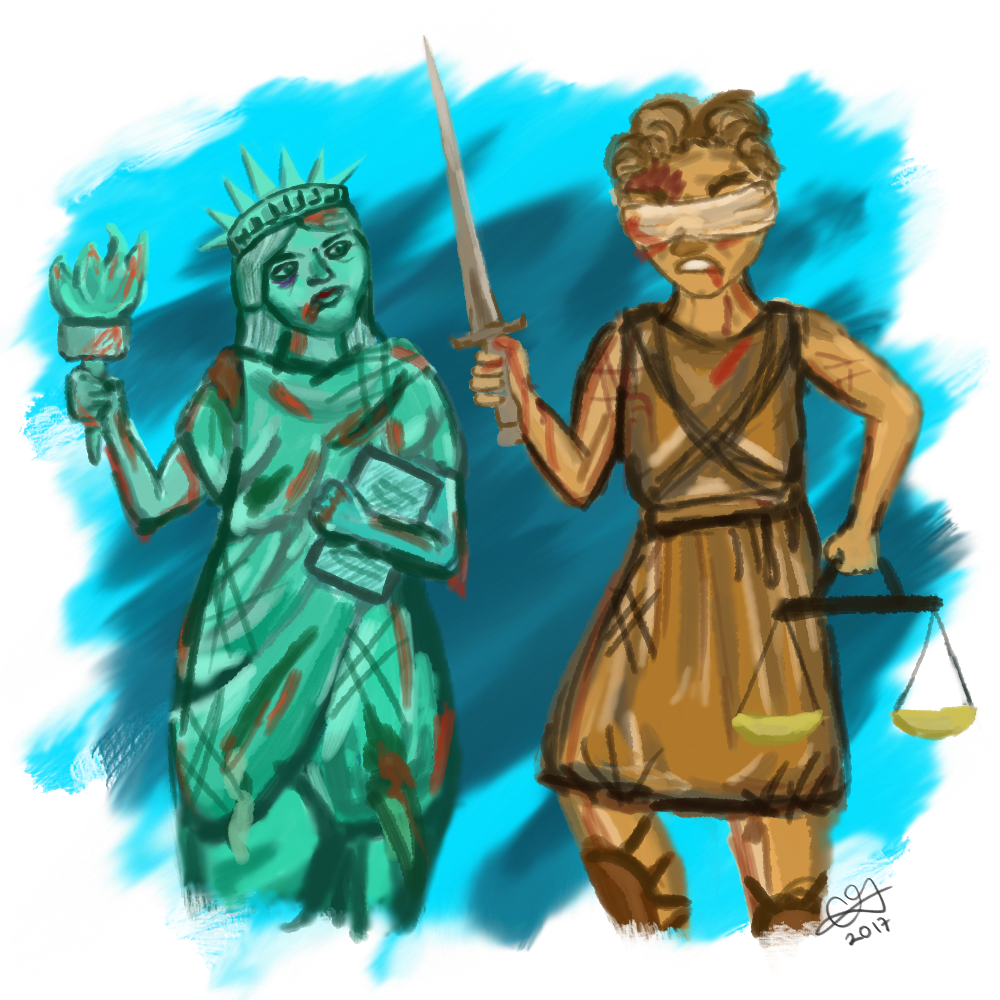 At the call of the speaker, the room rose to its feet. “We begin every meeting with the Pledge of Allegiance,” explained Jose Diaz, president of the Berkeley College Republicans. He addressed a room packed to capacity with several dozen people, including news media clustered at the back. In chorus, the group began.

“I pledge allegiance to the flag of the United States of America, and to the Republic for which it stands, one nation under God, indivisible, with liberty and justice for all.”

The date was February 2, 2017: the first meeting of Berkeley’s largest right-wing student group in the wake of violent protests surrounding their invitation of conservative provocateur Milo Yiannopoulos to the liberal university. While BCR almost certainly remains unique in their actual verbal recitation of the pledge, the values the pledge itself expresses are normally considered inarguable in the university. In the political tumult of the last year, however, some of those tenets seem called into question on American college campuses. Devotion to flag and union clash with the loyalty that many young Californians claim to owe their state rather than country. One nation, indivisible; yet a mostly joking, somewhat serious secession movement of “Calexit” gains steam on social media. “Liberty” and “justice” are concepts that many university students now contend are incompatible, as controversial speakers and ideas are met with suppression, outrage, and violence.

BCR held its meeting only one day after an estimated $100,000 worth of damage was dealt to both the university and the area surrounding campus, and the event had already made national news. Both liberal and conservative media outlets had picked up on the undeniable irony of an anti-free speech riot occurring at the proclaimed home of the Free Speech Movement. This was not an isolated event, though. Issues of free speech on college campuses have made waves both in California and throughout the nation as incensed student bodies make the case that their rights to safety, security and justice outweigh the rights of other students, actors, or groups to say what they please. Today, as was true fifty years ago, the University of California finds itself at the hotbed of the debate over free speech and student radicalism on college campuses.

Issues of free speech on college campuses are far from new. The debate over the role of unrestricted political speech on college campuses dates back to at least the 1960s, when leftist student movements began to sweep the Western world and upset academia with distinctly radical thought. Despite following in the same tradition of student activism, the protests of the past are not the same in character as those of today. Student movements of the 60s rallied against conservative bureaucrats who sought to suppress controversial thought on campus. This suppression of speech was especially true in public universities. Beholden to taxpayer dollars and state legislatures, public institutions such as UC Berkeley or San Francisco State College tried to repress controversial or provocative expression on their campuses. Over the course of a decade of struggle, university students successfully fought for their right to free speech through organization, dissemination of thought, and mass movements.

The character of today’s student activism could not be further from that of their ideological predecessors. In a bizarre inversion of the movements of the past, anti-free speech protesters use the same tactics of mass movement and superior organization to suppress the very rights that students of the past fought and bled to achieve. The pendulum swings the other way – harnessing the same anger and frustration felt by the free speech activists of the 60s, today’s activists seek to advance their own liberal social causes by distinctly illiberal means. While activists of the past saw the growth of their movement via freedom of speech and the conversion of hearts and minds, radicals of today see their movement advancing through the suppression of dissent. This change in tactics has been spurred by the plain and simple truth of a change in power dynamics. No longer an embattled minority on college campuses, leftist radicals now constitute, while not a majority, at least a strong and vocal plurality amongst politically-active college students. The change from championing free speech to suppressing it was likely not a deliberately quasi-fascist shift on  the part of organizers, but instead a subconscious shift to take advantage of new tactics in a climate of transformed campus power dynamics and politics.

The suppression of free speech on college campuses plagues both the state and the nation. The Foundation for Individual Rights in Education, a nonprofit founded in 1999, publishes a scorecard tallying those American college campuses which are amenable to free speech, those that threaten free speech, and those that directly inhibit free speech assigning them ratings of “green”, “yellow” and “red”. California features no universities that fall into the first column. Most colleges fall into the second column, the “yellow” rankings, amongst these Berkeley, UCLA, and Stanford. Other colleges, though, fall into the “red” ranking, including two campuses of the University of California: Riverside and Merced. A good deal more campuses of the California State University system also fall into the “red” category, including CSU Long Beach, Cal Poly Pomona, and Fresno State. Nationwide, fewer and fewer schools fall into the “green” category. Prestigious schools like the University of Chicago, Carnegie Mellon, and Duke still maintain a commitment to free speech, but with the exception of the University of Pennsylvania, no Ivy League schools make the list.

Nationally, news stories abound of flagrant violations of free speech on university campuses. In 2015, a Yale residence hall dean refused to ban outright Halloween costumes that some students found offensive, citing that “American universities were once a safe space not only for maturation but also for a certain regressive, or even transgressive, experience; increasingly, it seems, they have become places of censure and prohibition.” For her efforts, she was relentlessly harassed by outraged elements of the student body, culminating in her resignation soon later. In California, the infamous Milo Yiannopoulos planned a stop at UC Davis several weeks before his visit to Berkeley, and was again shut down by anti-free speech radicals in a small-scale portent of things to come.

The spread of such an epidemic of violence and outrage on the most basic of First Amendment rights merits a discussion of why certain elements of student bodies are so opposed to free speech. Exactly why a certain movement wants to ban a certain type of speech varies between instances, but the most basic answer is a rejection of the idea of free speech as something sacrosanct. The immutability of free speech as a societal value dates back to the Enlightenment, and was famously canonized by John Stuart Mill in his seminal text On Liberty, wherein he championed the virtues of a free society. Mill offered a variety of justifications for free speech, most notably perhaps the “marketplace of ideas”, wherein he posited that a wealth of different views could be expressed, and society as a whole would benefit from hearing them all and choosing the best.

Anti-free speech radicals reject this idea. Instead, they push the belief that some ideas are too dangerous to even be allowed to be voiced. “There’s a big difference between free speech  and giving a platform to someone that’s openly hateful”, argued one anti-free speech activist at UC Davis. This sentiment was echoed by members of the Berkeley community several weeks later after their riot, most prominently through op-eds in the Daily Californian newspaper. Neil Lawrence, a former Daily Cal columnist, described the riots as “self-defense”, while illegal immigrant Juan Prieto wrote paradoxically that “violence helped ensure the safety of students”, despite the fact that several UC Berkeley students were pepper-sprayed, assaulted and hospitalized due to the violence.

Whether or not the Berkeley College Republicans’ invitation of Milo Yiannopoulos to their campus constitutes hate speech is a point of contention. While Yiannopoulos has indisputably made discriminatory remarks, these comments have been accessory to a separate, primary message of political conservatism. Notably, other past speakers on the Berkeley campus such as Louis Farrakhan and Angela Davis have made racist remarks, though since these were within a context of political liberalism, they did not engender near the controversy as did Yiannopoulos.

Regardless of the speaker, since the events at UC Davis and UC Berkeley, the University of California has found itself at the epicenter of the larger debate about free speech that has convulsed both the state and nation. Pitted against each other are two equally impassioned factions: one that demands a right to speech, and another that demands a right to protection. Thus far, only one of these sides has been willing to use violence to achieve its ends. The conflict may soon escalate even further, though, as the controversy has begun to reach a national audience in an unprecedented manner. Fresh off of his January 20th inauguration, President Donald Trump threatened to cut federal funding to the UC system for failing to protect the right to free speech and, in their inaction, condoning violent acts on innocent people with a different point of view. As they did fifty years ago, UC Berkeley and its peer institutions again find themselves on the forefront of this hot-button debate. Only time will tell whether or not the public universities of California will be able to maintain their claim as the home of free speech.