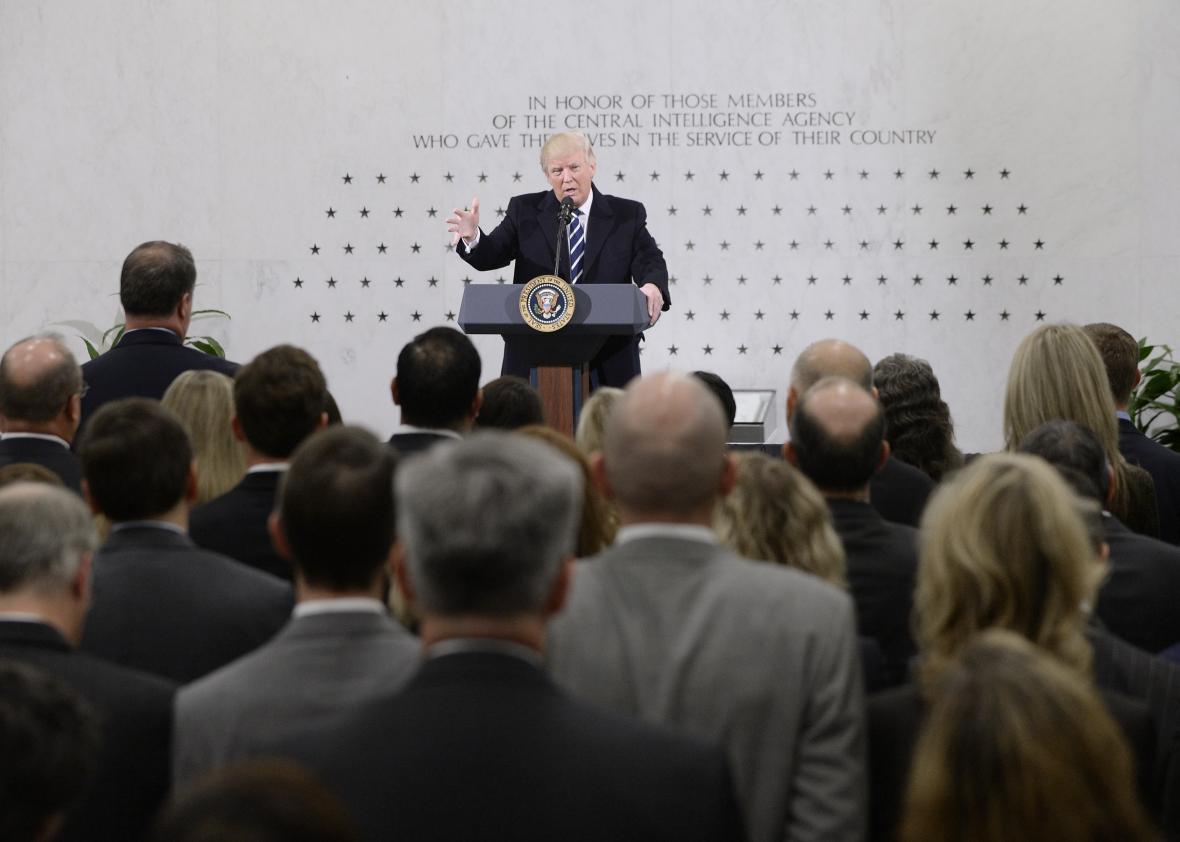 A Tug of War Between the President and the Intelligence Community

On January 21, 2017, addressing several hundred key CIA officials, Donald Trump stood before the CIA Memorial Wall and announced, “there is nobody that feels stronger about the intelligence community and the CIA than Donald Trump”. Despite this declaration of support, his speech received mixed feedback, a testament to the Trump administration’s mercurial relationship with the intelligence community (IC).

While in his first few months in office, President Trump has occasionally supported and even expanded the power of the IC, the Trump administration has also undermined the credibility and trustworthiness of the intelligence community. This inconsistency, however, is not unprecedented. When examining the historical relationship between the presidency and the intelligence community, it becomes clear that executive prerogative has been a critical factor affecting the IC’s power.

Former Director of the CIA General Michael Hayden stated that “there is no part of the executive branch that more exists on the outer edge of executive prerogative than the American intelligence community… My literal responsibility as director of the CIA with regard to covert action was to inform the Congress – not to seek their approval, to inform.” This controversy surrounding the autonomy and power afforded to the IC has been a constant companion to the IC’s work throughout American history. From its humble beginnings during the Revolutionary War to today’s complex amalgamation of seventeen distinct branches overseen by the Director of National Intelligence, the intelligence community has greatly transformed over the years as a consequence of Presidential policy.

During the Revolutionary War, the Continental Congress created the Committee of Secret Correspondence in 1775 with the purpose of gathering “foreign intelligence from people in England, Ireland, and elsewhere… to help in the prosecution of the war”. Later, George Washington normalized the relationship between the Presidency and the IC when, in his State of the Union address in 1790, he argued that the Office of the President would require Congress to fund intelligence operations in order to provide for the “common defense.”

Despite Washington’s calls for funding, due to the isolationist policy of the time, the IC did not again become relevant until the Civil War. With the secession of the South, the intelligence community splintered between Union intelligence and Confederate intelligence. At any given point in the war, the success or failure of a side was largely attributed to its accurate or inaccurate intelligence, respectively. For example, the Confederate victory at Chancellorsville was credited to its accurate intelligence concerning Union’s forces, while General Lee’s defeat in the Battle of Gettysburg was ascribed to his lack of information regarding the size and strength of the Union Army. In this way, the Civil War reinvigorated the importance of the IC, affirming its necessity in conducting a successful war effort.

The World at War: The IC’s New Trajectory

The next period of rapid change for the intelligence community were the World Wars. A testament to presidential preference, the IC saw dramatic fluctuations in its power throughout these years.

However, with one dramatic moment in America’s history, the IC’s trajectory irreversibly changed course. The bombing of Pearl Harbor on December 7, 1941 revealed the inefficiency and lack of practical application of the intelligence community and propelled it into a period of exponential growth with the purpose of protecting America from future threats.

The War Gets Cold, The IC Heats Up

Following World War II, Congress responded to rising tensions between the United States and the Soviet Union with the passage of the National Security Act of 1947 which enhanced the IC’s power and created the basic structure seen today. During the Cold War, Presidential policy generally favored the expansion of the IC’s power. As a case in point, in 1952, President Truman established the National Security Agency which, in conjunction with the CIA, became an important player in defense and foreign policy, particularly following its role in the Korean War.

President Eisenhower solidified the CIA’s formal recognition as a trusted agency in 1954 when he established a joint effort between the CIA and Air Force to survey Soviet air defense systems. Furthermore, under Presidential authority, Defense Secretary McNamara created the Defense Intelligence Agency, who, working with the CIA, analyzed intelligence in the lead up and aftermath of the 1960 U-2 incident and the 1962 Cuban missile crisis, two incidents serving as prime examples of the necessity of intelligence briefings for the President to make informed decisions.

However, this golden age of reverence for the IC reached a period of new challenges in the 1970s. As President, Richard Nixon questioned the effectiveness of the intelligence community, labeling it “too costly” and “fragmented and disorganized.” Following these remarks, President Nixon issued a Presidential directive in 1971 calling for “reviewing and evaluating all intelligence programs and activities”. Even more scrutiny was placed on the IC following Nixon’s Watergate scandal. Though only having “tangential involvement,” the CIA was particularly scrutinized, and a general public mistrust of the IC ensued.

Calls for accountability on the part of the intelligence community grew in prevalence, prompting Congress to amend the Foreign Assistance Act in 1974 that required the CIA to report all covert operations to a relevant congressional committee. Shortly afterwards, the Rockefeller Commission began investigating illegal activity partaken by CIA operatives. Though there was no evidence of wrongdoing on the part of the CIA, it was determined that “President Nixon tried to use CIA records for political ends,” demonstrating a blatant abuse of power.

Moving into the 1980s, Ronald Reagan’s presidency served as an opportunity for growth for the IC as well as a period of scandal. A firm supporter of the IC, President Reagan significantly increased its budget while additionally signing Executive Order 12333,increasing the scope and range of covert operations and allowing the IC to assist domestic law enforcement using covertly-acquired foreign intelligence. However, though Reagan intended to bolster the IC’s power, the Iran-Contra affair tarnished its reputation once again as it revealed the oftentimes blurred ethical lines that the intelligence community operated on.

Continuing this period of contrasting power dynamics, while George H.W. Bush had previously served as Director of the CIA, giving him a vested interest in bolstering the IC, the Soviet Union’s fall in 1991 led politicians to question the continued necessity of the intelligence community. As a result, in 1991 Congress reorganized the IC and reduced its funding and employee numbers.

However, this shift away from the IC was only temporary. As the United States entered the Gulf War of 1991, technology and the intelligence community intersected with new emphasis being placed on “coordinate imagery collection” and the establishment of “uniform standards for the interpretation and dissemination of imagery to the field”. In this particular case, the advancement of technology rather than presidential preference saved the IC.

Perhaps the single most defining moment for the intelligence community in recent years came with the horrific and unprecedented terrorist attacks that occurred on September 11, 2001. In response to these attacks, under the leadership of President George W. Bush, swift action was taken to bring those terrorists to justice and prevent future attacks.

“Pundits, scholars, commentators, and others quickly labeled 9/11 as an intelligence failure,” an outcry that paralleled the reaction seen following the IC’s failure to predict the Pearl Harbor attacks. In reaction, the IC was restructured and granted new power and authority. In the name of national security, Congress enacted the Patriot Act with the purpose of preventing future terrorist attacks by granting the intelligence community greater surveillance capability.

With this newly acquired power, however, also came controversy. Following the release of sensitive information by whistleblower Edward Snowden in 2013, the scope and reach of the NSA’s surveillance was unveiled to the American public, who denounced this surveillance power as government overreach. Nonetheless, this outcry soon died down as ISIS and other terrorist organizations posed increasingly great concerns to global security.

Following the IC’s successful coordination that led to the death of Osama Bin Laden during President Obama’s tenure, a renewed sense of cohesion appeared between the Presidency and the IC in addition to a renewed reverence for the IC. However, despite outward appearances of solidarity between the Obama administration and the IC, there were underlying tensions. In a 60 Minutes segment, Barack Obama “voluntarily lay blame on the intelligence community for the failure to grasp the rise of the Islamic State”. Furthermore, even after leaving office, Donald Trump has accused Obama with ordering the IC to spy on his transition team, transferring this tension to the next administration, leading to the question dominating headlines today: what kind of relationship will the Trump administration have with the IC?

It is clear that Mr. Trump’s relationship with the IC began on shaky grounds, particularly following the release of an IC report on possible Russian involvement in the 2016 election. In response, in what has become a customary platform for expressing his disapproval, President Trump tweeted that, “The “Intelligence” briefing on so-called “Russian hacking” was delayed until Friday, perhaps more time needed to build a case. Very strange!”

Despite President Trump’s criticism of the IC in this respect, his actions tell a different story. For example, Donald Trump recently granted greater autonomy to the CIA by giving them the authority to independently conduct drone strikes on their own authority, bringing new meaning to General Hayden’s statement that the job of the CIA is to “inform Congress – not to seek their approval, to inform.”

However, at the same time, President Trump has advocated for receiving fewer intelligence briefings, expressing that it is unnecessary to “be told the same thing in the same words every single day for the next eight years.” With this in mind, he acknowledges that “if something should change… immediately call me”. What is uncertain is whether this statement conveys President Trump’s trust in the IC or his lack of faith in their ability to distinguish valuable information from redundant information.

While uncertainty is the dominant feature moving forward into Trump’s tenure in office, particularly in regard to his relationship with the IC, two things are certain: the intelligence community has become an integral part of this nation’s security and presidential preference profoundly impacts the IC’s power.