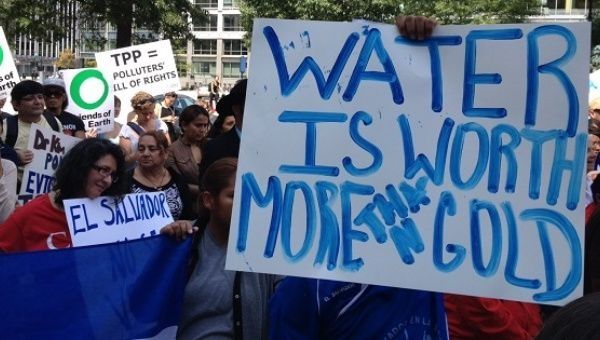 The landmark decision in El Salvador to ban all metal mining came as a surprise to many. It passed with multiple parties’ support, with none opposing, and is considered a huge win for environmental activism in the region. El Salvador’s water sources are especially vulnerable to pollution by practices of the mining industry, and existing mining laws and regulations were so weak that many felt a total ban was the only way to ensure the protection of the country’s water sources.

This victory comes at a time when the majority of Latin American countries are in their own battles over land rights – and there are a variety of experiences. In Brazil, for example, conflicts between indigenous communities and the government’s deals with foreign mining companies have led to increasing violence, especially against those opposed to the presence of big industry (like a municipal environmental secretary who was shot 14 times in front of his house). Last year, an NGO in Brazil found 61 land activists that had been killed over protesting land rights and usage. Peru also has a history of violence, like the notorious 2009 ‘Bagua Massacre‘ where indigenous peoples and the Peruvian government clashed, resulting in dozens of deaths and hundreds wounded. In this case, the indigenous groups were successful in that their protests did lead to the government repealing a law that allowed the president to give foreign companies access to indigenous lands for oil drilling. Similar events occurred over a controversial mining operation in Cocachacra, Peru, in April of 2016, and there are ongoing disputes across Latin America.

At the same time, Latin America is one of the leading areas of the world in terms of environmental protection, and more recently, in regulating the power of large multinational corporations. Latin America has been a regional bloc that fights for collective action to combat climate change, and for good reason– they house some of the most vulnerable populations in terms of climate change’s negative effects. The Latin American bloc has been instrumental in the past in international climate talks, notably in 2010 when the UN Climate Conference was hosted in Cancun. Countries like Costa Rica (which is almost 100% run on renewable energy), Bolivia (which has new legal obligations for the state to protect the ‘rights’ of natural resources), and Colombia (which is using sustainable development models to move past the violent histories of cities like Medellin and Bogota) are exemplary of how seriously governments and their citizens are taking environmental protection.

That being said, it is easy for the more industrialized world to forget how important natural resources can be to the economic development of a region and to increasing standards of living. While it is certainly not always the case, it is very possible for a country to responsibly use the profits of extractive industry for the betterment of the nation, and there are similarly many citizens who would encourage the country to do just that. Take Chile, for example, which was able to use its own copper mining industry to build a Sovereign Wealth Fund that provided support during the global recessions in 2008. This was after miraculously succeeding in a non-violent transition from Pinochet’s notoriously brutal authoritarian military dictatorship to what is now a thriving democracy.

Ultimately, the increasing debates over how Latin American countries should deal with different claims, rights, and uses of land exemplifies a more vibrant civil society and an increasingly democratic process. In a region that has suffered such violent colonial and postcolonial histories, it is heartening to see democratic participation normalized as a method of dealing with these conflicts – and that citizens’ voices, like those in El Salvador, are not only being heard, but are finally being listened to.