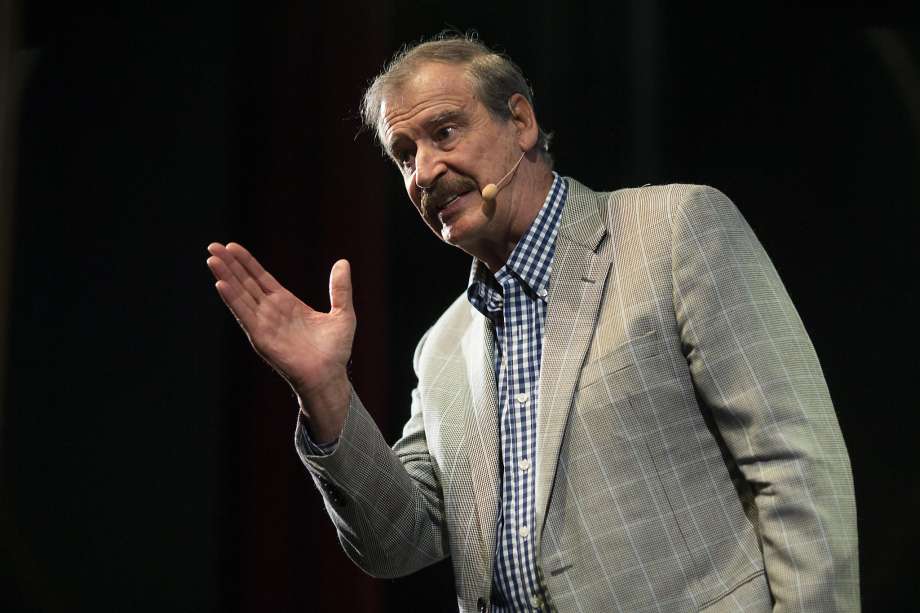 One word comes to mind upon seeing Vicente Fox in the flesh: charming. Tall and straight, boasting a full head of hair and an impressive mustache, the 55th president of Mexico does not look his seventy-four years. His age isn’t reflected in his demeanor, either; Fox is an impressive speaker, his jokes both in his Spanish and accented English garnering chuckles, his voice booming as he proclaims us, the millennial audience, the future of the world.

Fox is a true politician. From his country-club outfit with creased slacks and plaid shirt to his high-watt smile that claims authenticity, the man reeks charisma. He speaks of the glory days of the institution of trade deals, deflects issues of Mexico’s inequality and poverty with statistics of decreasing unemployment and rising wages, does political acrobatics around questions of how the 2018 Mexican presidential elections will go, and laments the state of Venezuela under his ideological opponents, Chavez and now Maduro. Even his pronunciation of “upon” echoes the sound of his political party’s abbreviation, PAN.

Most of all, though, Fox decries what has him trending on Twitter (#FuckinWall): Donald Trump. Much of his prepared speech speaks to the virtues of both Mexico and the U.S., which he refers to as “the land of the free”, while bemoaning our declining and unproductive relationship under racist, ignorant, unqualified Trump. It was a great speech, but Fox’s focus on nationalist movements trending globally did not distract his audience from the tough questions they brought.

A Mexican-American friend called Fox the “George W. Bush of Mexico, or worse”. Frankly, any even remote equivalent to that particular former U.S. President shouldn’t open themselves up to half an hour of questions from UC Berkeley students. Perhaps Fox did not realize that he didn’t just invite Berkeley students to do so; he invited a very specific audience of Latinx, often Mexican-American, politically-minded and aware students to quiz him on his political beliefs and neoliberal record.

He seemed confused by the term “anti-blackness” when asked about combating the prevalence of it in Latinx communities. When asked about violence in Mexico, Fox answered that the nation’s geopolitical position made it a haven from traffickers rather than drug producers — a valid analysis — but stumbled in claiming that these unspecified drugs should be legalized, like they “have been in California, Washington, and Colorado.” It remains unclear whether Fox is genuinely unaware that certain U.S. states have legalized marijuana instead of the hard drugs being trafficked in Latin America.

The questions got tougher and tougher for the center-right politician who had moments ago praised UC Berkeley as a center for liberalism.

“What are you doing to actually alleviate the poverty and violence faced by Mexicans migrating to the U.S.?”

“Why doesn’t the Mexican government support domestic manufacturing workers instead of laying the blame on global powers?”

“What is your response to the mass graves found in Mexico, including that of the forty-three students in Iguala?”

Fox’s answers became more and more generic — an admission of failure on the part of government programs turns into bringing more opportunities to Mexican citizens turns into an abstract call for justice. He ends one such answer with an emphatic claim that first, “[we must] defend our dignity.”

And perhaps that is the political purpose of Fox today. Similar to our own Jimmy Carter, Fox’s legacy will carve out a unique space post-office: he will not be remembered as the most popular or consistent President but a man who, above all else, will defend his country from foreign threats. And while he remains answerable for his stances (and efficacy) on domestic issues and causes, Fox’s unrelenting and boisterous resistance remains a key force in the Mexico City counter to Trump’s Washington.