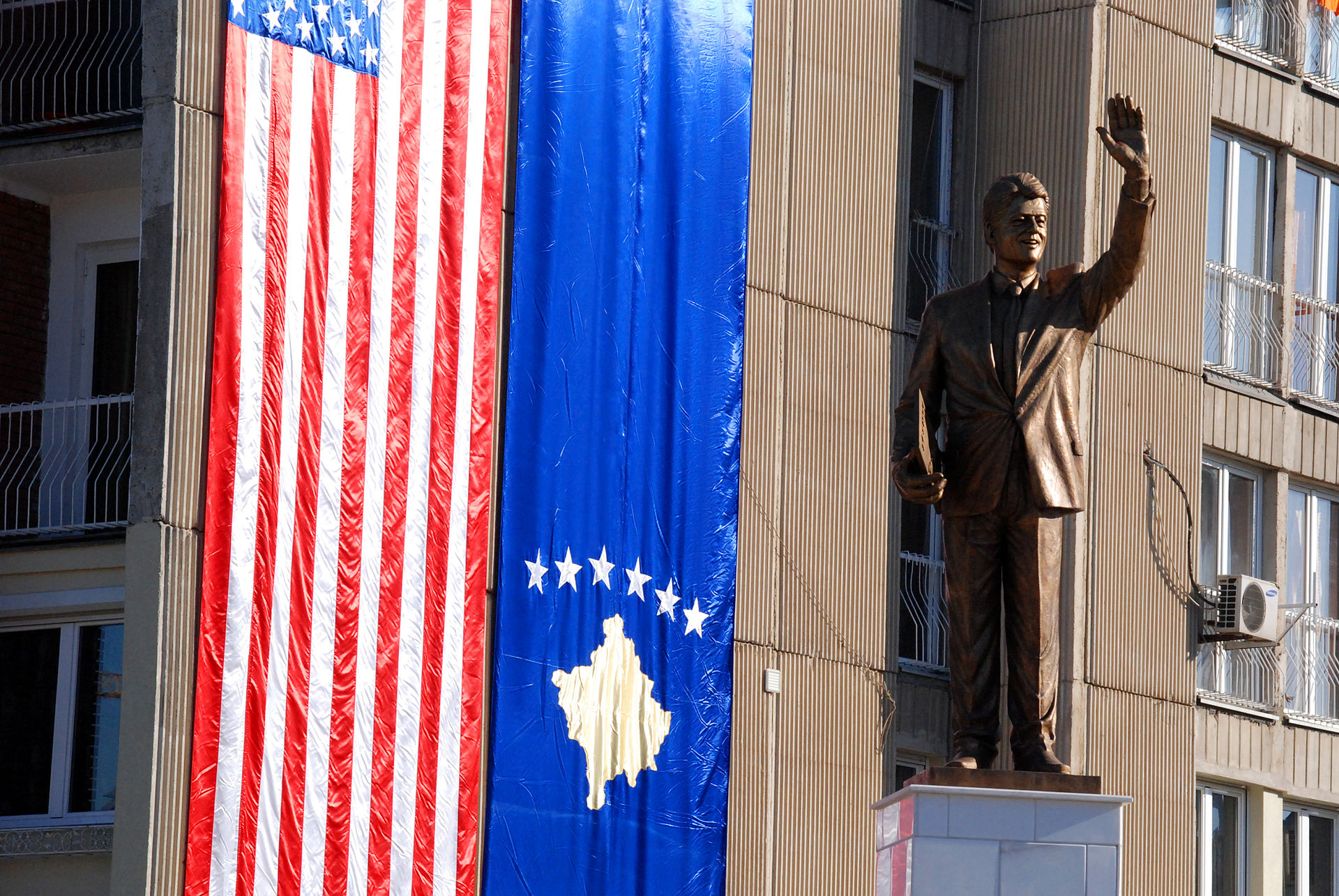 Fear and Loathing in the Balkans

On January 14, 18 years since the end of the Kosovo War and six days before the inauguration of President Donald J. Trump in the United States, a train left Belgrade, Serbia, bound for the city of Mitrovica. Mitrovica lies in either northern Kosovo or southern Serbia, depending on who you ask, and that train is the first between Serbia and Kosovo in the new millennium. Such an act between two foes might be seen as progress, a move towards integration and possibly peace. This train, however, had emblazoned on its side the phrase “Kosovo is Serbia” in 21 languages and the three colors of the Serbian flag; the inside was filled with decorations honoring Serbian saints and icons.

The response was prompt. On the Kosovar side, seven armored personnel carriers containing special forces were deployed to the north to stop the train while Kosovo’s State Minister Edita Tahiri called it, “a provocation against Kosovo, which shows that Serbia has openly come out with aggressive politics threatening Kosovo’s territorial integrity and sovereignty and its natural security.”

Serbian President Tomislav Nikolic responded by asking, “why were the so-called international community and the Albanians so upset about one train? Maybe because it had ‘Kosovo is Serbia’ written on it, and because it had pictures of our icons inside.”

The haunting ghost of war

Unfortunately, this train is only one piece in a series of developments that have signaled an escalation in the region, an escalation largely provoked by Serbia. In Mitrovica, the city’s Serbs built a two-meter wall to divide Serbian and Albanian neighborhoods. The wall was later destroyed following EU-mediated talks. Later, in early February, negotiations in Brussels reportedly “went terribly wrong and had no results.”

Meanwhile, responses from both Serbia and Kosovo have hardly been peaceful, echoing the ethnic conflict of two decades prior. Kosovar President Hashim Thaci claimed in an interview with German news broadcaster Deutsche Welle “that Belgrade is arming Serbs in the north of Kosovo” and “applying Russia’s Ukrainian model.” In defense of the aforementioned train, President Nikolic warned, “I will go to war, as well as my sons.”

The escalation in Kosovo is, however, a manifestation of larger global trends. With the accession of Donald Trump to the presidency of the United States, there has been constant worry in Kosovo over President Trump’s previous positions against US involvement in international institutions and operations. After all, the intervention in Kosovo in the 1990s was largely an American effort. Because both Russia and China were opposed to any UN Security Council intervention in 1998, European countries were unwilling to intervene on their own. They instead waited for and relied on America for a NATO intervention without UN-approval.

Since then, the NATO mission in Kosovo and the peace that it enforces has been the result of sheer American will and might. Though the American force in Kosovo is relatively small (612 soldiers out of the 4600-man Italian-led force), the symbolism of American support has been immense in preventing war.

America’s strong positioning in Kosovo, and in the former Yugoslavia in general, has led the Serbian government to seek help from their historic allies in Moscow, molding the ethnic conflicts into a greater proxy conflict between the United States and Russia. Examples of the conflict’s proxy nature can be seen in Russia’s proposal of a UN resolution condemning the NATO intervention, their vetos against Security Council resolutions recognizing Kosovo, Russian state news outlet Sputnik’s anti-Kosovo slant, and various facts of the recent escalation, such as how Serbian President Nikolic is backed by Russia and the aforementioned train was Russian-built. As such, developments in Kosovo are inherently tied to developments in the greater international conflict between the sole superpower and its once-defeated rival.

With the new American administration, the future of Kosovo is simply unknown. While the Trump Administration has taken a hard line in many foreign policy areas – Palestine, the South China Sea, and Mexico to name a few – not a single word has been said of the Balkans. Instead, President Trump has made comments in support of reducing American obligations to even NATO member states – not to mention non-member non-states like Kosovo – and appeasing Russia with regards to the Ukrainian conflict.

However, the uncertainty regarding the NATO mission, and intervention in general, cannot be laid solely at the feet of President Trump; any inaction on the President’s part can also be the result of inaction on the part of the American people. According to Kenneth Schultz, a Stanford professor who researches the influence of domestic politics on foreign policy, “Support for an active US foreign policy is in decline right now. This happened in the 1970s, after Vietnam, and we are seeing it again as a result of the long and problematic wars in Iraq and Afghanistan…[Trump’s] isolationism reflects more of nationalist impulse (sic) to keep the US from being the world’s policeman.”

If there is an unwillingness by the United States to involve itself further, European states should not be expected to fill the vacuum left. Marko Jaksic, a Mitrovica politician representing Kosovo in the Serbian parliament says, “If Trump gives up the Balkans, I don’t believe France or Germany would fight for Kosovo without American support.” When factoring in the rise of nationalist and isolationist movements throughout the continent, any large action would surely be a surprise.

Because the present escalation is founded on President Trump’s seeming ambivalence towards Kosovo, the best action for the President to take in order to head off a shooting-war is a simple repudiation of such rumors and an affirmation of America’s continuing commitment towards Kosovar independence. Other than Trump, the Democratic Party also has significant power to create public opinion. Returning to Professor Schultz, “if something happens in [Kosovo], and Democrats don’t call for intervention, and Trump has no desire to intervene against Russian interests, there is not going to be any independent demand for action from the public.”

The lack of any official response to recent events thus causes many to worry. In Bosnia, a state plagued by its own ethnic conflicts, rumors and whispers fill the air with fear that war will return to the former Yugoslavia, where war can never seem to be contained by borders. The best-case scenario at this point would be some American action, and a return to the negotiating table. The worst-case would be a reenactment of the Srebenica massacre, which resulted in over 8000 deaths, in any of the small villages dotting the cultural landscape of the Balkans.

Liam is an editor for the World Section and a junior studying economics and history. His writing tends to involve development and security issues.