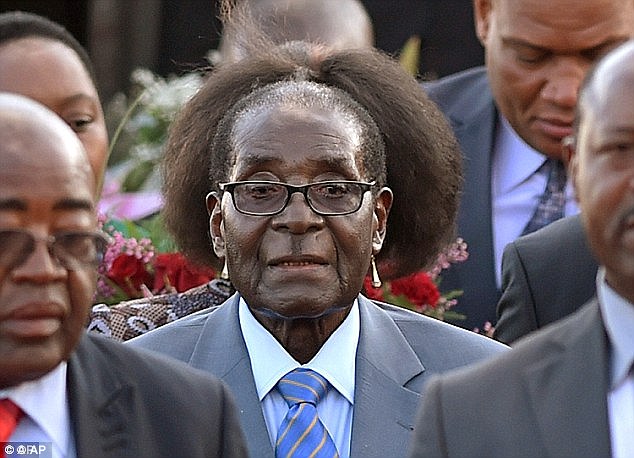 In a true birthday bash, the oldest president alive, Robert Mugabe, celebrated his 93d birthday on February 21st. The ostentatious celebration, including a 93-kilogram cake for the invitees to indulge in, is the antithesis of the standard of living of $3.24/day for the average Zimbabwean. A severe economic crisis is looming in the country and the popular discontent with the leader of the last 37 years is rising. Despite this, Mugabe has no plans of stepping down anytime soon and has declared his candidacy for the 2018 election. Even if many are rightfully questioning the continued longevity of the Mugabe regime, a plot to sustain the Mugabe dynasty is in the making: Grace Mugabe is getting ready to take over after her husband.

As the front figure in the liberation movement against the British colonial authority in Zimbabwe, Robert Mugabe assumed the role of national leader on the eve of independence in 1980. Attributed the epithet of ‘National Hero’, Mugabe called for the unification of Zimbabweans and widespread welfare reforms in the education and healthcare sectors. As time has passed, the initial optimism has dwindled and Mugabe has focused his political strategy and resources on clinging on to power instead of the welfare of the nation. Sustaining an autocratic rule is, however, costly. Mugabe began to print money at a ferocious speed, plunging the country into a vicious spiral of inflation. In November 2008, the hyperinflation peaked at 79,600,000,000%.

Fast forward to 2017 and economic crisis is still looming in Zimbabwe. In September 2016, the situation was estimated to be the worst in seven years and has not improved since. The economy as a whole is shrinking, unemployment is rising and the country is running out of cash: only $100 million is circulating accounting for only a quarter of what is needed for the economy go around. In response to the seeming non-action taken by the government to improve the situation, doctors and nurses went on a 2-week strike in the beginning of February 2017 to demand higher wages and reform of the system. Succumbing to the crisis in the health care system affecting the country’s poor, the Zimbabwe Hospital Doctors Association ended the strike without either of their demands being met, stating ‘we make this huge compromise as a sign of our commitment to greater good.’ This is however only one example of the widespread discontent sweeping through Zimbabwe, and rapidly building political tensions.

Despite the rise of political tensions, in times of economic crisis, people want stability. A political shift would equal uncertainty and the fear of a further deteriorating situation sustains support for Mugabe, since the alternatives to him are largely undefined and limited. The main obstacle for a political rejuvenation is thus the lack of an effective opposition, able to harness the popular discontent and materialize it into a movement. Lauren Young, post-doctoral fellow at Stanford University has conducted research in Zimbabwe studying how political fear affects Zimbabweans propensity to dissent. During 37 years, the Mugabe regime has systematically used force and threats during crucial opposition rallies and elections. In the summer of 2016 Mugabe imposed a 2 week protest ban in Harare to silence the surge in opposition movements. A series of mysterious deaths of ministers in Mugabe’s party, Zanu-PF, have occurred when the party has been torn by factional conflict. In the aftermath of the 2008 elections, brutal violence erupted, targeting members of the opposition and critics of the regime, leaving more 100 dead and 200-plus abducted or missing. Young postulates that when political violence is embedded in people’s memories, the feelings of fear materialize in an individual’s cost benefit analysis of participating in dissent.

Despite the obvious crumbling popular support and extensive failures to keep the Zimbabwean economy afloat, Robert Mugabe has once again been endorsed by Zanu-PF for the 2018 election. Entering his 37th year at the presidential post, Mugabe has declared that he will stay president until God calls him. He has also declared his plans to ‘live until 100’ that could, in theory, make him a candidate in the 2023 election. However, the inevitability of nature’s course is unlikely to spare even the world’s oldest president. With increasing frequency Mugabe is seen stumbling over his words and nodding off during public appearances, prompting the unavoidable question: who is next?

Within the Zanu-PF the question of succession is taboo and the constitution is ambiguous about successors as the procedure of selecting a successor is left entirely in the hands of the party in power. The party in power is, in effect, Mugabe himself, but even with his death, the Mugabe-era may not end – his wife, Grace Mugabe, has been pointed out as a potential successor.

Grace Mugabe is in the process of carving out a political identity that would protect her against the loss of her husband. The First Lady has undergone a metamorphosis, trying to rub off popular epithets such as Gucci-Grace, attributed to her aptitude for extravagant shopping sprees. She is transforming into a fearsome political candidate to position herself for the presidency. In the fall of 2016 she secured the position as the head of the Zanu-PF women’s league. Moreover, within Zanu PF, her candidacy has been backed up since she has a ‘sellable name’ for Zanu-PF in a future election. In attempts to solidify her role as a political figure, Grace Mugabe is not so quietly strategizing her next move: “They say I want to be president. Why not? Am I not a Zimbabwean?”

If the incumbent Mugabe accords his wife the role of his successor, both Grace herself and Zimbabweans, in general, are in trouble. If appointed in a nepotistic fashion instead of being popularly elected, it is likely that she will perpetuate the autocratic structures of the current regime in order to maintain power. In addition, the current electoral autocracy will not provide Grace Mugabe with a political structure in which she can reign, other than by maintaining the fear tactics to demobilize opposition and keep the Mugabe-dynasty afloat a little longer. A potential Grace Mugabe presidency is thus the antitheses of the shift towards democracy and openness that Zimbabwe is in such dear need of.