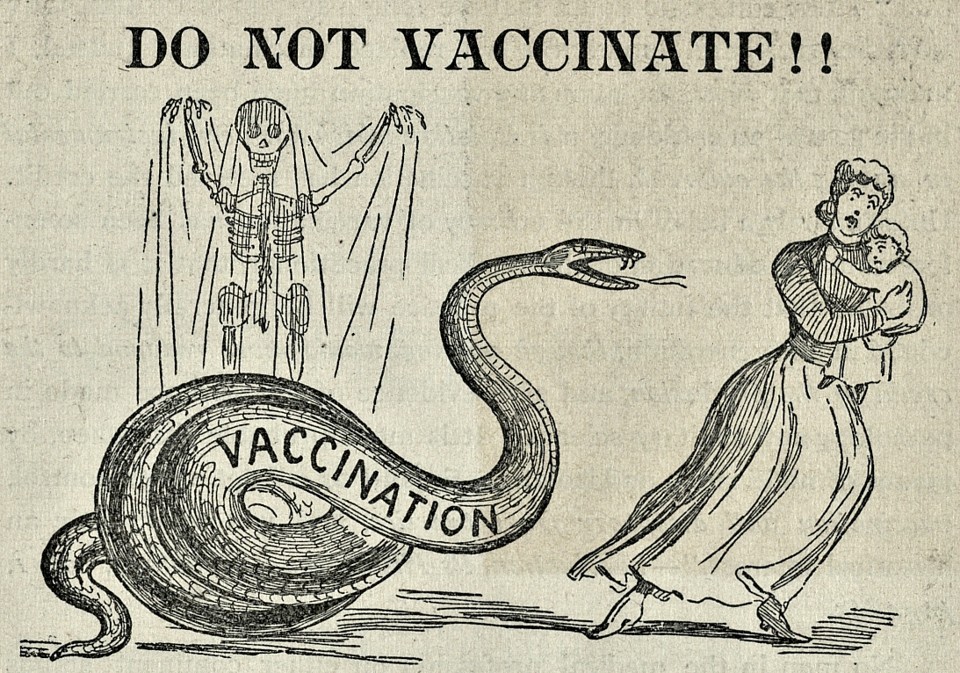 “Vaccines worked so well… that people have forgotten the agony of infectious disease.”

Kathryn Edwards, the chair of pediatrics at Vanderbilt University, made this remark concerning humanity’s unfortunate amnesia about the destruction of life wreaked by diseases throughout history. The existence of the medical field and the creation of the vaccine industry were direct responses to illness, one of the few enemies our species can never fully eradicate that has the capacity to cause incredible suffering. However, the unpredicted success of vaccines and modern medicine have allowed unscientific fabrications to garner popularity because in our relative health as a human race it is no longer as automatic to harbor a deep fear of disease.

One such pernicious scheme that unfortunately gained significant traction in the recent decades was thought up by the now-discredited medical researcher, Andrew Wakefield. In 1998, he published a study that linked the measles, mumps, and rubella (MMR) vaccine with autism – he called this “autistic enterocolitis.” Before his paper was even published, he had also filed a patent claiming himself to be the inventor of a vaccine that would “eliminate measles and treat inflammatory bowel disease.” The MMR vaccine competed with his own vaccine and was already widely used, so it advantaged him to discredit that vaccine in hopes of replacing it with his own. However, after public hysteria met his findings, journalist Brian Deer of the Sunday Times of London investigated the study and discovered that Wakefield had taken bribes worth €435,000 in exchange for misinforming lawyers engaged in cases regarding parents who believed the MMR vaccine had harmed their children. Furthermore, “he’d given children at his son’s birthday party cash in return for blood samples for his research.” After a long hearing by the General Medical Council (GMC) that concluded in 2010, it was decided that Wakefield had “subjected 11 children to unwarranted invasive tests such as lumbar punctures and colonoscopies without necessary ethical approval,” and was therefore “guilty of serious professional misconduct.” The GMC struck him off the medical register that year and the Lancet disavowed his paper.

For almost the past two decades, the discussion regarding the connection between vaccines and autism resonated as a prominent and public topic of discussion amongst scientists, doctors, celebrities and even our current president of the United States. The rampant speculation around this medical myth has crippled legitimate conversation about autism, as it is now frequently mischaracterized as caused by vaccines when in fact it is a “developmental disability” that has nothing to do with immunization. The fear of their children developing autism has been cited as the reason why many parents in past years prevented their children from receiving immunization. As a result, countless scientific studies launched with the intent of finding the specific connection between vaccinations and autism.

The Center for Disease Control (CDC) has a page in their “Common Concerns” section titled “Vaccines Do Not Cause Autism.” They cite a 2011 study that tested eight vaccines on children and adults and found them all exceptionally safe. They also link an “evidence-based meta-analysis of case-control and cohort studies” published in 2014 on the potential connection between autism and vaccinations that comes to the following conclusions: not only is there no connection between vaccines and autism, there is also no correlation between vaccines and ASD (autism spectrum disorder), or autism/ASD and MMR, thimerosal, or mercury. Dozens of similar scientific studies come to the same conclusion – autism has no relation to vaccines, and therefore does not cause them.

Wakefield’s false “findings” were clearly discredited by the medical world – his work found fraudulent specifically with the intent of furthering his own personal wealth. And yet, the discussion relating vaccines to autism persists. President Trump recently invited prominent anti-vaccer Robert Kennedy Jr. to the White House to discuss a “new committee on vaccine safety,” even though such a committee, the ACIP, already exists. Despite larger percentages of the population now going unvaccinated, that group of unvaccinated people have yet to feel the true effects of a community lacking immunization that was so destructive over a century ago. This is because such people still benefit, for the most part, from herd immunity.

Herd immunity is defined by the US Department of Health and Human Services as “when a critical portion of a community is immunized against a contagious disease, [so] most members of the community are protected against that disease because there is little opportunity for an outbreak. Even those who are not eligible for certain vaccines—such as infants, pregnant women, or immunocompromised individuals — get some protection because the spread of contagious disease is contained.” In other words, the immunity of the majority protects the minority who cannot protect themselves. That is why, according to pediatrician Aaron Carroll, no children under

the age of one died of chickenpox between the years of 2004 and 2007. Although children that young cannot receive the vaccination, they benefit from the immunity of the older, vaccinated children.

In that way, the efficacy of herd immunity must be maintained, and in the wake of the current vaccination scare, it has certainly been compromised. “Cases of measles rose from 56 in 1998 to nearly 1,400 in 2008. In 2006, a 13-year-old boy became the first person in more than a decade to die of the disease in Britain.” For reference, preceding the measles program that began in 1963, 3 to 4 million people were affected by the disease in the US every year. Furthermore, the CDC explicitly states that measles has become more common in recent years in part due to “U.S. communities with pockets of unvaccinated people.” Is it fair that the general public become susceptible to measles and other diseases based on the decisions of an uninformed minority? More specifically, in the pursuit of learning more about autism; a condition that is very prevalent in the US, has the vaccine discussion distracted from directing money towards autism research and understanding autism as something separate from immunization?

President Donald Trump has certainly given credence to conspiracies about immunizations, an action that has spread alarm in the medical community. “The American Academy of Pediatrics released a statement after [his presidential] debate calling his comments “dangerous to public health.’ Such comments have been immortalized on Twitter, where in 2014 he tweeted, “Healthy young child goes to doctor, gets pumped with massive shot of many vaccines, doesn’t feel good and changes – AUTISM. Many such cases!” As previously discussed, there is no scientifically proven connection between autism and vaccinations. Therefore, in the realm of desiring a properly informed public, it is alarming to have the president of the United States circulating ideas that are empirically wrong and that he has no medical or scientific background to back up. As for the issue of children “[getting] pumped with [a] massive shot of many vaccines,” there is comprehensive medical research backing up the quantity of any given shot for all different age groups that maximizes its effectiveness and minimizes danger for the recipient.

Trump further stated his vaccination opinions during a primary presidential debate, asserting that “[he wants] smaller doses [of vaccines] over a longer period of time.” This is another idea that is unfortunately not backed up by scientific fact; vaccine dosages are carefully calculated to give the minimum amount necessary to cause an immune response within the body. Decreasing the dosage from that which is already prescribed would render the vaccine pointless, and waiting to administer it would make the recipient vulnerable to the disease.

Trump has also made exaggerated comments regarding autism, “Tremendous increases…  really a horrible thing to watch the tremendous amount of increase.” In fact, during the past two years the autism rate amongst children has stayed the same (1 in 68, according to the CDC), but how it has certainly increased since 2000 (at the time the rate was 1 in 150). However, with a greater awareness of autism today than at that time, autism is a broader descriptor than previously thought and therefore nowadays more cases are being labeled as such. In that way, simply labeling the increase in autism as a “tremendous increase” without truly stating all of the facts misrepresents the situation.

This factual distortion that seems to be a theme for President Trump and his administration is unacceptable given that one of the core roles of the president is to be properly informed, even if the rest of the country is not. In this specific scenario, the fact that President Trump is providing a platform for anti-vaccers rather than publicly condemning the false connection between vaccines and autism is not only foolish and a violation of the inherent trust people have in the word of the president, but also detrimental to the cause for researching autism. As Trump elevates the vaccine conspiracy, he obfuscates the broader discussion about autism and improved research. Hysteria over the nonexistent caveat of vaccines has easily overshadowed the difficult issue of how we can best assist and improve the lives of the autistic, as well as further understand the root of the condition and how to treat it.

Just as herd immunity safeguards the immunocompromised of society who cannot protect themselves, the wealth and knowledge of the government are meant to shield minorities and those in need from the tyranny of the uninformed and the selfish. When the government fails to fulfill that fundamental responsibility, those who are different from the majority

become sidelined as their inescapable circumstances are approached improperly. The fallacious comparison between vaccines and autism was brought into the spotlight not to spread awareness about the condition itself, but because a self-interested man used it as a conspiratorial tool in hopes of furthering his personal wealth. Instead of clearing the name of the vaccine and further pursuing an immunized and well-informed society, Trump has muddied further what used to be an issue of uncontroversial clarity – that vaccines are advantageous to the human race. Should the push against immunization persist, humanity will inevitably see the failure of such a path as many widespread diseases become common again. Unfortunately, through all of the uproar surrounding misplacing the truth and failing to relocate it, losing sight of the legitimate cause of autism has been the unnoticed side effect. For a man who made so many promises about “[cleaning] up… corruption”, Donald Trump has not yet succeeded in differentiating scientific fact from mere fabrication.