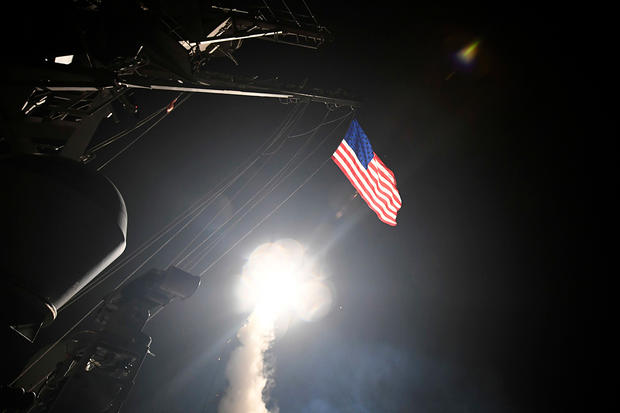 What Are We To Make of Trump’s Airstrike?

“No child of God should ever suffer such horror” said a sober Donald Trump, justifying his decision to launch a targeted airstrike just hours ago.

But what are we to make of this action? After all, it wasn’t all that long ago that the now Commander-in-Chief masqueraded as an isolationist – keen on criticizing both the hawkish blunders of his most recent Republican ancestor and the “spineless diplomacy” of his predecessor. Of course, this diplomatic tight-wire act failed to give us any real gauge of his future policy. If anything, the strike is particularly important for that very reason; it offers a potentially prescient glimpse into our nation’s international agenda.

For decades, the United States has struggled with its proverbial role as the “World’s Policeman.” This particularly exorbitant obligation is buttressed by a certain ideology, one that arguably has its origins in the early 20th century. As a pioneer of Liberalized Democracy™, the United States played a profound role acting as both the ideology’s enforcer and its paradigm. From the defeat of right-wing authoritarianism following the Second World War, to the the fall of communism at the Cold War’s nadir, the Union has stressed its commitment to global civic freedom. As such, it has developed an implicit responsibility to safeguard the vested interests of those fighting against oppression.

This implicit responsibility has been a formational driver for each administration’s foreign policy. While W was adamant – almost bellicose – in his quest for liberal democracy, Obama was far less so. Call it pragmatism (or perhaps impotence), Obama was significantly less apt to fight an ideological battle, especially if it meant leveraging hard power.

Enter Trump. While we are still in the administration’s infancy, it may be safe to assume that Trump is unlikely to remain strictly insular. In fact, his speech only hours ago leads us to a different conclusion.

Decrying the inhumanity, the bloodsport, and incivility of Assad was a different kind of Trump. It was not the petulant Trump trying to ramrod healthcare through Congress, nor the shifty-eyed salesman trying to make a case for American manufacturing. It was a Trump that was willing to engage with the international community, imploring “all civilized nations” to end the terror of the Assad regime. It was a Trump that seemed genuinely concerned with the state of free people’s across the globe and positively affected by the anguish of the very Syrians he refused to harbor. But, more importantly, it was a Trump that proved his willingness to engage America’s physical might in order to uphold our long-standing paradigm.

It is far too early and he is far too mercurial a man to safely extrapolate a coherent future policy. The move in part contradicts earlier overtures to the Kremlin. This, coupled with his prior resistance to involvement in the Middle-Eastern quagmire, make any prediction all the more dubious. That being said, this may still be an encouraging sign. For all his bluster, for all the charade, at this moment he has offered the public a hopeful window into his international philosophy.

“And we hope that as long as America stands for justice, then peace and harmony will, in the end, prevail,” concluded Mr. Trump.

We may indeed be looking at the new torch-bearer of an exhaustive commitment.