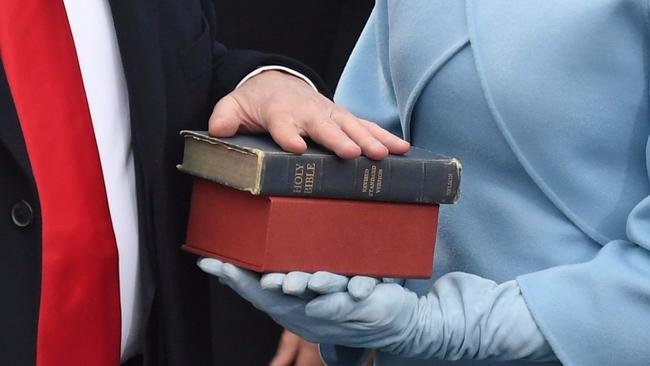 While this statement is utterly incontrovertible, declaring it publicly would nonetheless get me killed throughout much of history, and even today it would be impossible to get elected in this country after blaspheming so openly. Of course, there are a few real gems to be found in those dusty pages — Matthew 7:12, for instance, tells us in beautifully simple prose to “do to others what you would have them do to you.” But while the Golden Rule is, in my opinion, the greatest distillation of moral truth that humanity has produced, the Bible also contains an endless selection of slightly less helpful prescriptions. Ephesians 6:5 commands unambiguously, “Slaves, obey your earthly masters with deep respect and fear,” while Deuteronomy 22:28-29 declares that a virgin who has been raped must marry her rapist, so long as that rapist pays the “damsel’s father fifty shekels of silver.” Needless to say, anyone who lived their life entirely in accordance with the Good Book would not be a good person to invite over for Christmas.

Undoubtedly, moderate Christians and Jews would respond that they would never condone slavery or rape or any of the barbaric practices that populate their favorite fairy tale. Great! It is perhaps the best consequence of modernity that it has rendered so much of religion obsolete, and that better, secular values — like feminism, tolerance, and gay rights — have by virtue of their clear moral superiority been slowly gaining ground on the values ostensibly held by God. Still, to claim as many moderates do that these secular precepts are rooted in the Holy Scripture is just flat out ludicrous. Were the Bible a person, he would be the most misogynistic, racist, homophobic, bigoted, superstitious, and murderous guy you’d ever meet, and the minute you tried to defend him by “interpreting” his eminently literal proclamations of violence and destruction as gorgeous metaphors for love and kindness, he would likely stone you to death for a hundred imaginary crimes.

Moreover, millions — if not billions — of people on Earth right now accept such fatal nonsense without question, while the remaining billions are stunningly uncritical of the faithful. A 2014 Pew Poll reveals absolutely terrifying levels of support for suicide bombing among Muslim-majority countries — only 38% of Muslims in Egypt, arguably the most Westernized nation among those polled, responded that suicide bombing in the name of Islam is “never justified” — and yet simply mentioning this existentially threatening problem guarantees that one gets called a bigot and an Islamophobe. Moreover, as the AIDS epidemic ravages the continent of Africa, the Catholic Church’s proselytizing of the sinfulness of condom use continues to cause unnecessary pain and death on a massive scale, even after the “progressive” Pope Francis vaguely softened the Church’s stance. It is basic common sense to be worried about these beliefs, and it defies common sense to assert that they have nothing to do with the books that explicitly espouse them.

In an increasingly globalized world, humanity has no choice but to converge on the most fundamental notions of right-and-wrong, even if that means saying things that aren’t politically correct. Apocalyptic nuclear weapons are becoming easier and easier to create, while many of those who wield them are not becoming more reasonable and nonviolent. For believers who have managed to square their religious views with science and secular morality, and especially for those who look to religion merely for a sense of comfort and community, it may be tempting to argue that no one actually subscribes to the doctrine verbatim. This sadly isn’t the case. Both horrific atrocities like the Crusades, the Inquisition, the pogroms, and 9/11 as well as society-wide injustices like the oppression of gays and women can be directly attributed to highly plausible readings of the holy books, and there is no place for these evils now or moving forward. Furthermore, to pretend that the criticism of specific and dangerous religious dogmas is tantamount to racism or bigotry is to commit an act of intellectual laziness that perpetually precludes us from making any progress on this front whatsoever.

In spite of the damage it has wrought upon our civilization, religion remains at the heart of our social politics, both at home and abroad. Issues like transgender rights, gay marriage, stem cell research, the teaching of evolution, sex education, abortion, ecclesiastical tax exemptions, and a host of others would be no-brainers if not for the influence of Christianity on American politics. Moreover, in many explicitly theocratic nations, the full oppressive force of dogmatic thinking is on display. Women are still denied the right to drive, to get educated, and even to leave their homes unaccompanied in several theocracies such as Yemen and Vatican City, where the judicial systems are founded on works of sacred fiction. What never ceases to amaze me is just how fearful American conservatives are of Islamic Law being implemented in the U.S. — Oklahoma officially banned it in 2010 — while they push enthusiastically for Biblical values at the same time. We haven’t just created a slippery slope here: we’ve already fallen off the cliff. According to a 2015 PPP poll, only 30% of Republicans oppose establishing Christianity as the national religion, while a mere 37% believe in evolution. This is nothing short of an emergency. If the separation between church and state continues to blur, we will truly have no way of protesting the reprehensible extremists overseas except by insisting that they’re worshipping the wrong invisible sky monster, and that really doesn’t sound like the logical or moral high ground to me. Secularism has to win, or the world will stay locked in a Bronze Age battle of cults until a sufficiently pious organization obtains nuclear weapons and blows us all to smithereens.

What we must do, then, is exert enormous societal pressure on fundamentalist religion to acquiesce to modern values, such as tolerance and equality. It is taboo in this day and age to support slavery or to burn witches, but this wasn’t always true. There was at some point a shift in the culture, after which the tailor who believed that his neighbor was casting spells on him became the subject of ridicule rather than the lead witness at that neighbor’s trial. This is what needs to happen whenever anyone acts on religious views in a way that harms other people. If you’re decapitating infidels, as ISIS does, or killing your citizens for being atheists, as our ally Saudi Arabia does, or booing a gay soldier risking his life to protect you, as many at a 2011 Republican primary debate did, your beliefs should not be respected. We cannot be tolerant toward intolerance if we want that intolerance to stop, and those who purport to hold liberal principles must prove it by condemning the treatment of women as second-class citizens and the murder of nonbelievers for heresy and the violence against cartoonists for expressing their free speech, even when the culprit for these affronts to human dignity is religion. Religion is not an excuse. There are no excuses.